If all the world was paper, and all the sea was ink...

... if all the trees were bread and cheese
what should we have to drink? 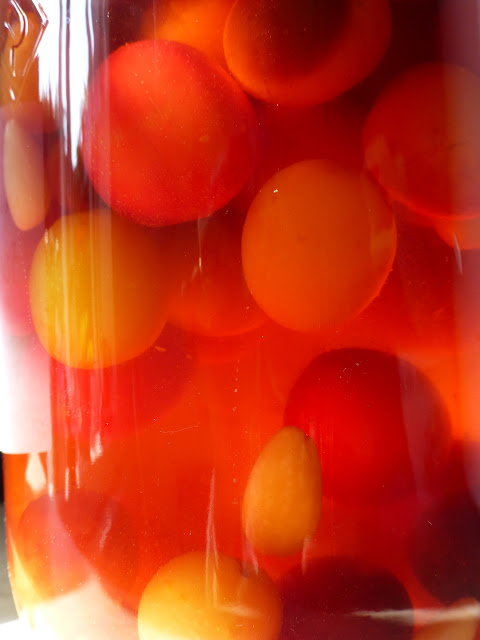 Do you remember that absurd nursery rhyme? I thought of it today after a little printing foray landed me in a sea of blue ink which I managed to get on myself and almost everything else in the immediate, and not so immediate, vicinity. But never mind the mess, the print results were pleasing and what is a little blue ink among friends?!

I have found this summer a strange limbo time, for various reasons with which I won't bore you. Even without today's inky exploits reminding me of the old nursery rhyme, I have felt sometimes I am inhabiting an absurd world that no longer makes a great deal of sense and in which I am not sure where I belong.

But it is mid-August; the weather has been glorious; the blackberries are beginning to glow darkly on the bramble bushes and the wild plums are ripening far above my head in the trees that line the rides beside the cornfields and this is a good time. 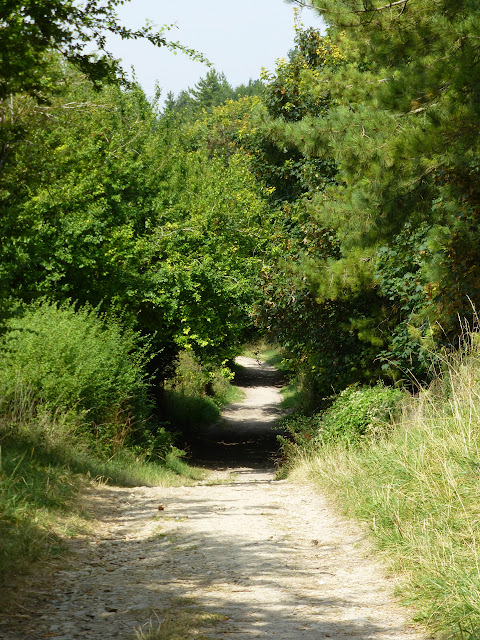 The country smells of summer - the contented, rich, dusty smell of ripe barley and wheat against the greener scent of long grass, wet with dew in the early morning but quickly drying as the sun climbs higher. The atmosphere is anchoring and seems to dare me to preserve it.

That primeval urge to preserve and squirrel away at this time of year runs pretty deep in Mrs Tittlemouse's soul and this week I have given in. Not to making jam though - I have a jam-making-embargo this year because we have enough jam in my larder from previous years' preserving efforts to feed an army. A large army, at that! Researching other possibilities, I found a recipe for a Russian plum liqueur. Intriguing. Slightly different from some of my other concoctions and safely not in the adding-to-my-jam-mountain category,  I thought I'd give it a go.

As I mentioned earlier, the wild plums are are already ripening but harvesting them is not an easy matter. The plum trees are tall - twelve or even fifteen feet high. 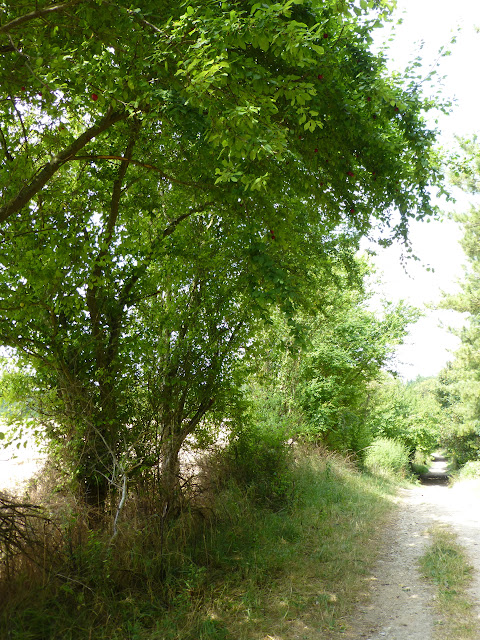 And of course the plums sway tantalisingly, right up among the dappled leaves, at their tops. 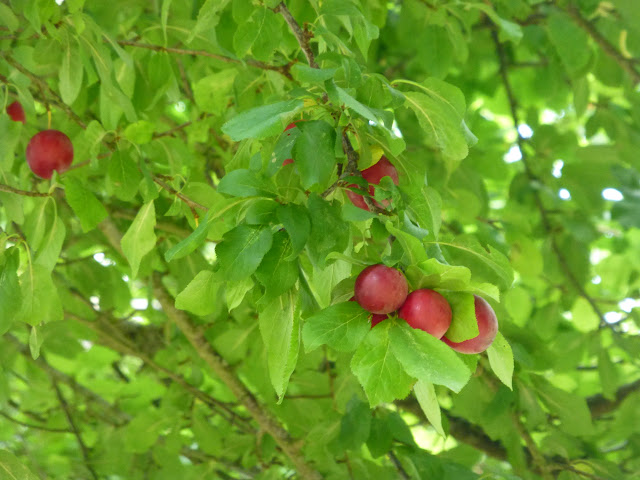 I have no portable step-ladder  high enough to pick them nor are the trees conducive to climbing, at least by me. What to do? A little ingenuity, was called for (and a little compromise). Some of the plums have already begun to fall to the ground. Discarding any with obvious bruising but retaining those that looked intact among those already fallen was a start. And what nature starts, man or woman may encourage, so a little judicious shaking of the tree produced a heavy shower of more. Plenty to half-fill several large jars. Here are some of my first gatherings - the reds a mixture of bright cherry, through garnet and ruby to deep purple with some translucent yellow ones thrown in for good measure

The liqueur recipe, which is my own tweaking of several similar ones, is childs-play. Here it is, in case you should wish to do likewise:

Pick or gather your plums - wild ones, any type, are great, if you can find them, but cultivated ones should work fine too, I guess.
Wash the plums and dry carefully in a clean tea towel. (Discard any obviously bruised or damaged fruit.)
Prick each one with a needle, several times and add to a large glass jar with a sealable lid.
Add sugar - ordinary white granulated sugar is fine - about 300g to 500g fruit.
Add a handful of blanched almonds for every 500g fruit.
Add enough Russian vodka* to top the jar up and cover the fruit and sugar generously - about 500 ml per 500 g fruit.
Leave in a cool dark place for as long as you can manage but at least three months before straining and bottling in clean, sterilised bottles. You may want to shake the jar from time to time as it matures to encourage the sugar to dissolve properly.
Before drinking or giving your bottles of liqueur away, design and attach a suitable label.

Ah, the labels! Which brings me to my printing foray. I liked the idea of the wild plum liqueur's Russian roots and wanted to make a Russian label for my bottles using Cyrillic script to spell out its Russian name - slivyanka.

*Obviously you can use any vodka but I wanted to keep the Russian connection intact so I used Russian vodka made, (according to the label on the bottle), from wheat grown on the Russian steppes and water from Lake Ladoga near St Petersburg. I like the story of its provenance and the thought of that exotic northern distillate meeting my homely wild plums and sugar, under my nose here in rural England. A northern stranger made welcome and warmed, far from home. 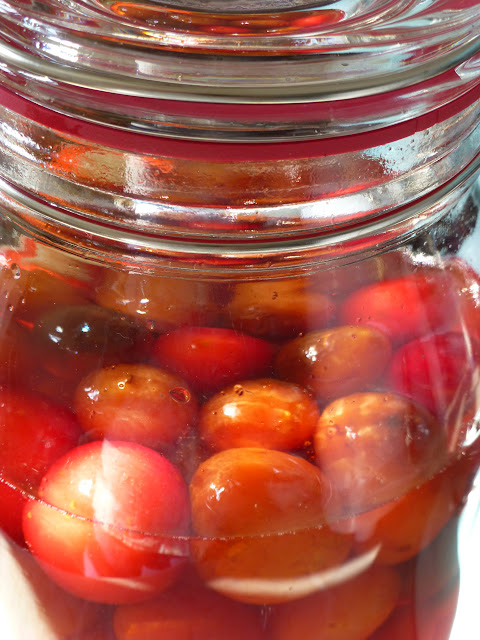 Researching slivyanka threw up some images of old Soviet labels which I used for inspiration and I made my own rubber stamp using this rather good little kit and this morning while my plums quietly continued to macerate in their rosy, syrupy jars in the dark, I had a go at printing with it. 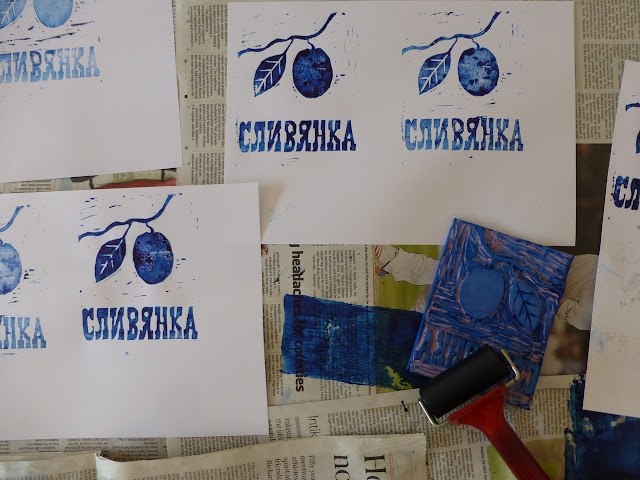 It's come out nicely, I think - handmade and rather rustic-looking but that's the effect I was after. The lettering, which had to be cut in reverse in order to print legibly, was tricky to carve out accurately and one or two letters had to have remedial plastic surgery in D's workshop to repair slightly over-enthusiastic carving. Ahem! Nothing to see here, people! 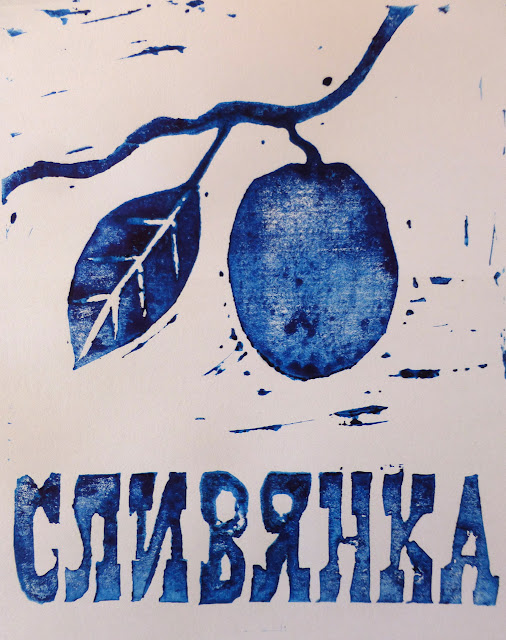 I can't wait to bottle and label up my slivyanka and then sip the sunshine that it encapsulates on a grey, cold and wet November day. And it doesn't just encapsulate the sunshine - it's the ordinary and yet extraordinary memory of walking out on this last Monday morning, early enough for the air to feel like cool water on my bare legs but warm with the promise of a hot day ahead; looking up into the fluttering, sun-dappled leaves, far above my head to search out the bright plums hiding there; the curious feeling of plums raining on my head as my friend gave the tree a strategic shake; gathering the fallen fruit from their dusty, chalky resting places on the path and in the more cushiony, tuffets of grass; it's the memory too of the simple assembly of the jars, companionably done, and the uncomplicated delight in seeing them begin their long, slow journey from raw fruit, sugar and spirit to becoming a single blended liqueur that I imagine might find itself at home in a Russian forest under birch trees laden with snow, sparkling in the winter sun. "Fanciful!", you may say. Guilty as charged! But food and drink is always about the imagination as well as taste. And this particular imaginative byway makes me feel no longer in limbo but at home in myself so I am sticking with it.

If all the world was paper,
and all the sea was ink,
if all the trees were bread and cheese,
what should we have to drink?


Wishing you too, happy August days, wherever you are
with memories so ordinary they become somehow extraordinary.
E x


Posted by Thomasina Tittlemouse at 20:19 10 comments: