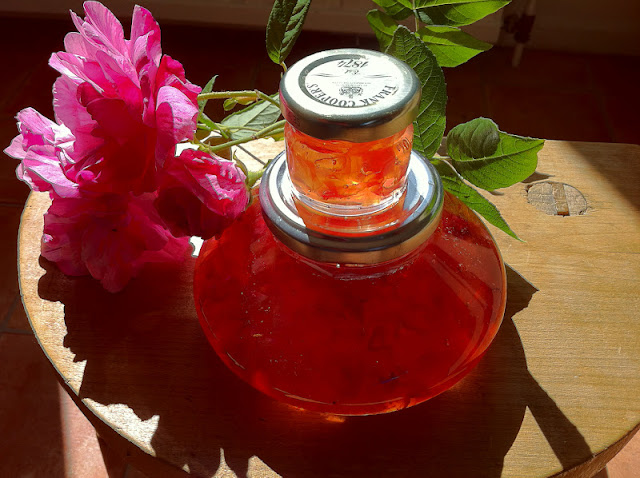 My post the other day was about a rosy cushion; today it is about rosy jam. Some years ago I managed to buy a small pot of rose petal jam from one of those expensive foodie delicatessen places. It was divine and made the most wonderful sponge cake filling mixed with mascarpone and fromage frais. But the expensive foodie delicatessen closed and rose petal jam seemed to be a delicacy that was unobtainable elsewhere. I expect you could have got it at Fortnum and Masons or Harrods or somewhere but these emporia were not on my doorstep and I suspect the price would have been eye-watering in any case. So the idea of rose petal jam seemed as evanescent as the fragrant perfume of the rose which it captured. But the fragrance lingered in my head as fragrances do and from time to time a slightly wistful memory of that translucent pink, scented jam floated in and out of my culinary ponderings. But last week Anne of Life in Mud Spattered Boots posted a recipe for rose petal jam here that turned that wistful memory into divine and present reality again. I don't know why I hadn't thought about making it before - even the tiny garden of my previous house in London was crammed with roses which grew rather well on the solid, London clay soil that other plants found too much to cope with and despite the damp, grey summer, the garden here is awash now with old-fashioned, scented roses.

I am not a very expert jam-maker and the vagaries of getting to the setting point without ending up with the consistency of something like concrete I've always found has been a bit of an issue. My strawberry jam-making efforts of a week or two ago, helped by using jam sugar with its added pectin, were unexpectedly good but my most recent attempt which was to make dried apricot jam was a disaster. Let's just say that the consistency of the results was reminiscent of nothing so much as half set UHU. (For non-UK readers this is a clear adhesive that is runny in the tube but which dries to a bouncy and distinctly rubbery consistency!) Not good and darned difficult to get out of the jar let alone spread on anything. Even my mother's rescue tip of adding some boiling water to the overset jam failed to make much difference. So it was with some trepidation that I embarked on another jam-making foray and an unusual one at that, with flowers rather than fruit.

But what a revelation! Anne's recipe is simple, very clear and it works brilliantly! The set is perfect - wobbly but not runny, set but not firm. The scented process of making it was both easy and enjoyable from beginning to end and the eating, well let's just say I have had to make another batch this morning because the first batch is disappearing faster than I can believe! It hasn't made it into a sponge cake filling yet but on scones with clotted cream it most certainly has.

Obviously the roses you use have to be ones that have not been sprayed and the more scent they have, the better. So my lackadaisical gardening habits have borne unexpected fruit as I haven't got round to spraying any of the roses ever, I think! You need a litre of rose petals which sounded rather a lot but in fact I filled a litre jug very quickly. I used mostly petals from my old fashioned deeply fragrant Rosa Mundi for the first batch supplemented by a few scented pale creamy pink ones from another bush whose name I don't know. 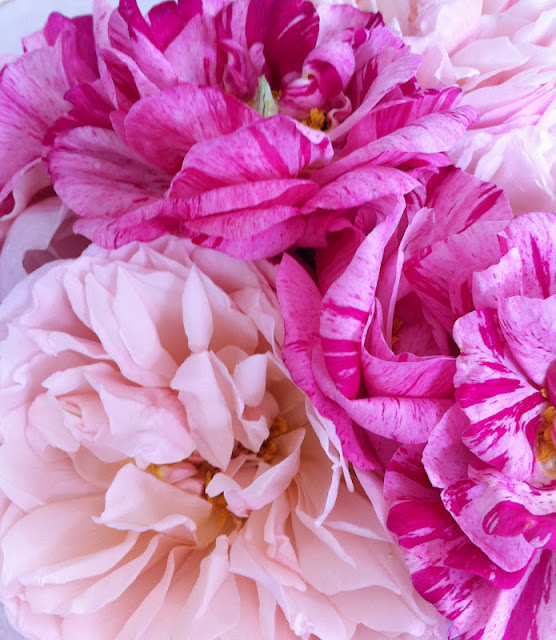 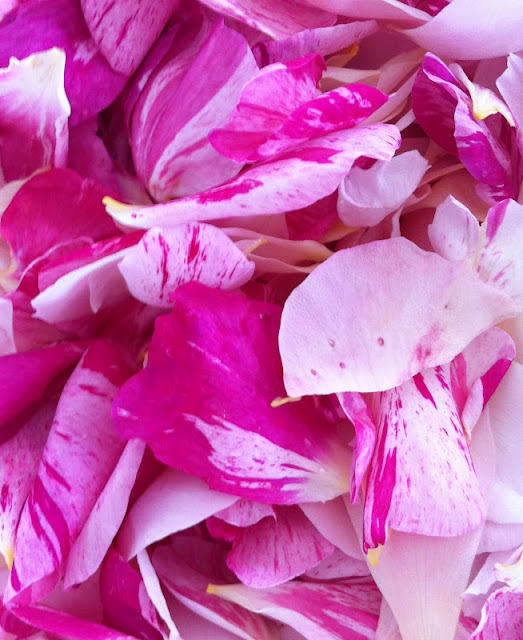 For the second batch I used the blooms of an unidentified, deep magenta, intensely scented, cultivated rose gone wild. Slightly differing in flavour but both excellent.
The appearance of the jam is as delightful as the taste with the fragments of petal caught in the translucent rosy jelly. If you have some unsprayed scented roses in your garden or can persuade a friend or relative to let you have some of theirs, I recommend giving this a go. Roses don't seem to be deterred by the awful British summer and this preserve will give you a taste of the summer we are not having but ought to be!

Posted by Thomasina Tittlemouse at 12:43

Email ThisBlogThis!Share to TwitterShare to FacebookShare to Pinterest
Labels: Cooking