At least six, probably seven, years ago I bought an inexpensive, plain, A-line denim skirt from good old Marks and Spencer. I thought it would be useful and it turned out to be one of those exceptionally useful purchases you wish you had bought two of, but only realise this, once the item in question is no longer stocked where you bought it. I have worn and worn this skirt, in season and out of season. 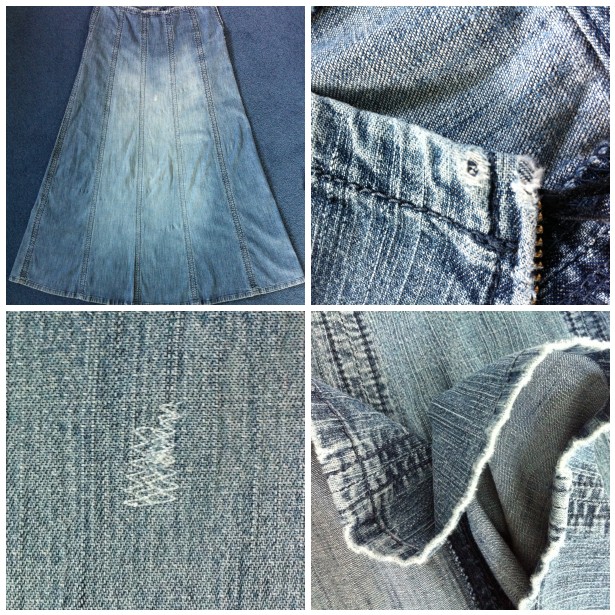 It has worked warmly in winter, layered up with cosy cardigans on top and thick tights underneath and like a breeze in summer with bare legs beneath and light-weight fabric tops above. I've dressed it up and dressed it down. I have worn it almost literally to "a ravelling" like the Tailor in Beatrix Potter's The Tailor of Gloucester. It has served valiantly at every turn and survived its many launderings pretty hardily. Until now that is. Recently it has begun to show signs of giving up the ghost. The hem is fraying badly and the waist seam is beginning to disintegrate and is developing holes here and there. In addition, it has not been improved by a small accident suffered when I was making my patchwork bag and turning the handle the right way out using my old Victorian wooden knitting needle. The knitting needle slipped and made a sizeable hole right in the middle of the front panel of the skirt which I was wearing at the time. Although I mended this with a small piece of fabric placed behind the hole and a bit of judicious 3-step zig-zaggery with the sewing machine, it did not enhance the appearance of my favourite garment. So the time had arrived for replacement. But could I find a similar style and length of denim skirt out there? Could I heck!

Marks and Spencer, bless them, although they kept the design going for a few years in other fabrics, of course have long since moved on to trendier cuts, fabrics and lengths for their skirts and although I have hunted high and low both On-Line and in actual shops, when I have had rare real rather than virtual shopping opportunities, nothing remotely similar has turned up in any emporium that I've come across. I couldn't even find a commercial pattern that seemed to replicate what I was after, simple though the design was at heart.

"Why don't you take the old skirt apart and make a pattern from it to make a new one?" suggested my mother. My mother does this sort of thing all the time and breezes into such a project without a second's hesitation but I felt rather like Tigger in A A Milne's "In Which It Is Shown That Tiggers Don't Climb Trees" - "It's all very well for Jumping Animals like Kangas but it's quite different for Swimming Animals like Tiggers." For which, read, "It's all very well for Expert Seamstresses Like My Mother but it's quite different for More Tentative Sewers Like Mrs T!"

There are two reasons for my Tigger-like nervousness really. One: I didn't want to "take the old skirt apart" - yes, it's worn and does need replacing but it's not quite beyond wearing in the garden or in the kitchen even if it's not really respectable enough to go out and about in. Once deconstructed, there would be no returning because, as you and I both know, I would never have been able to put it back together again remotely as it was, once it had been snipped apart.

And two: although I make quite a lot of my clothes, especially summer stuff, and I do draw out my own patterns for simple craft projects, I am afraid, cravenly, I have always stuck to using commercial patterns for clothing, both for the critical pattern pieces and also the instructions for assembly and I've learnt the hard way that sitting light to these does not always give a good result. So the idea of leaving the safe slow lane of following a proper pattern and pulling out into the dangerous fast lane of making my own pattern without any instructions was enough to cause serious trepidation and determination to resume the search for a safer, commercially insured bet.

Nothing turned up however, until by accident I stumbled upon a reference to a book called "Sew What! Skirts". 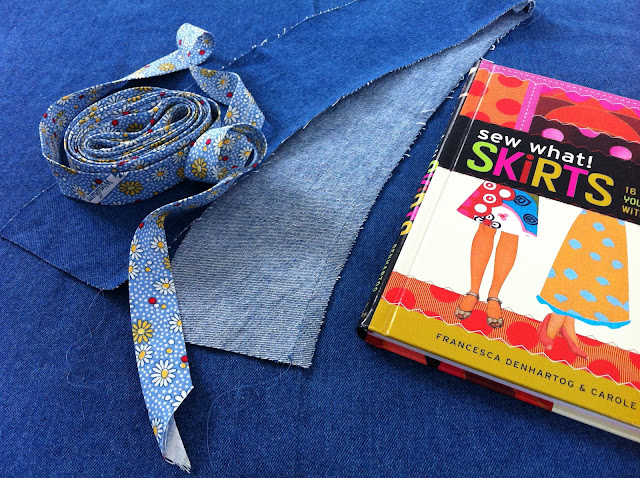 This is an American book of Empowerment and Enabling to the nervous sewer who has clung to the slow lane! It demystifies the whole pattern business and tells you how to draw out your own pattern for a variety of skirt shapes using your own measurements. Deep breath here. I do not do "make to measure" unless it is a lining for a basket or a straightforward bag or something. But in the end I thought, "In the absence of anything better, why not?" and bought a copy for not much more than the price of a commercial sewing pattern. Sew far, sew good! (Sorry - couldn't resist the pun!)

Now, as you will know, if you are a reader of these pages, Mrs T and arithmetic do not get on terribly well. Never have and probably never will so it was with some suspicion that I embarked on filling out the page in my new book with measurements and doing the accompanying multiplication, addition, subtraction and division. Even more trepidation accompanied the drawing out of the pattern (although my hand was held by my old skirt who sat by as a bit of a guide). The pattern, once drawn and cut out, looked too small. Quite a lot too small. Always a fear of mine when making my own clothes although I have learned from my experience of making a skirt when aged 13 or 14 and I thought I ought to add an extra inch all round in case I put on weight and predictably the result never ever fitted. Anyway I measured and remeasured and it still came out the same so I took the plunge. I bought a couple of metres of inexpensive denim fabric of the kind of weight and colour I liked and went for it.

And stone the crows, it's worked! In fact more than that, it fits and hangs far better than the old skirt! And I cannot believe how simple it turned out to be. The book not only tells you how to draw out a pattern to your own measurements but it also gives assembly instructions and not just for one type of skirt either. Basically it gives you options and you follow whichever section applies for what you've chosen. 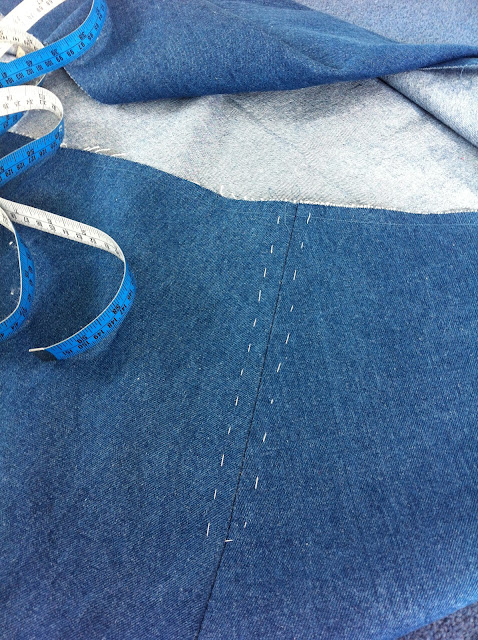 I am so delighted with this I can't tell you! It's nothing particularly ground-breaking to look at and you're probably thinking, "What's so special about a plain old skirt like this?" 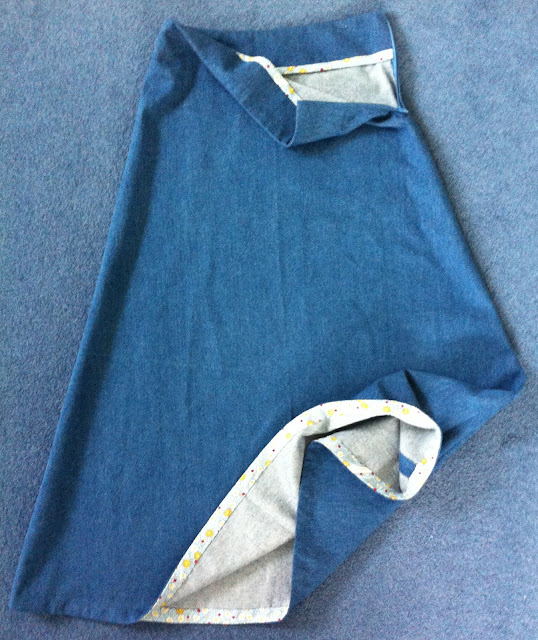 Well, there isn't anything particularly special about it apart from the fact that it fits like a dream - in fact I don't think I've ever had a skirt that has fitted so beautifully and I have discovered I can do something I thought was way beyond me. I wondered about jazzing up its austere plainness with some braid along the bottom or a few bright buttons at the side but I've passed the temptation up. The plainness of a garment like this is actually what makes it so incredibly versatile for teaming with other colours and fabrics depending on mood, weather and choice. Adding other colours and trims at source, as it were, would compromise that, so I've left well alone. Apart from on the inside!

On the inside, I have indulged myself to compensate for the austerity of the outside even though nobody will ever see apart from me. I know, I know - I am a sad soul! But I couldn't resist turning a fat quarter of deliciously pretty quilting fabric into homemade bias binding and finishing the edge of the facing with it as well as using it to create a false hem at the bottom. I often make hems like this, especially on a curved hemline as it's just so easy and avoids the bunching and crinkling of folding up a double layer of the skirt fabric. 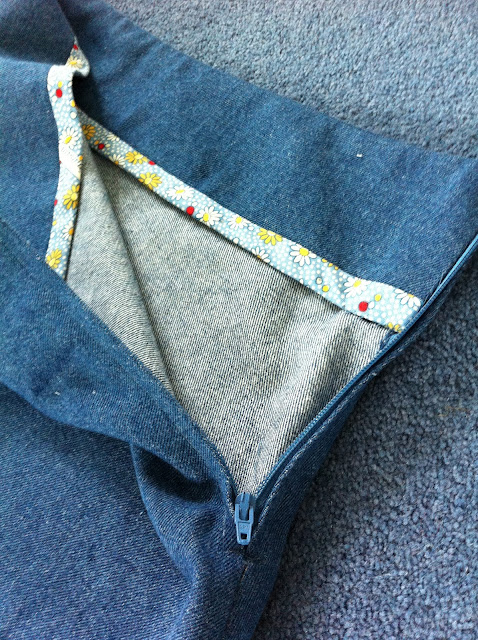 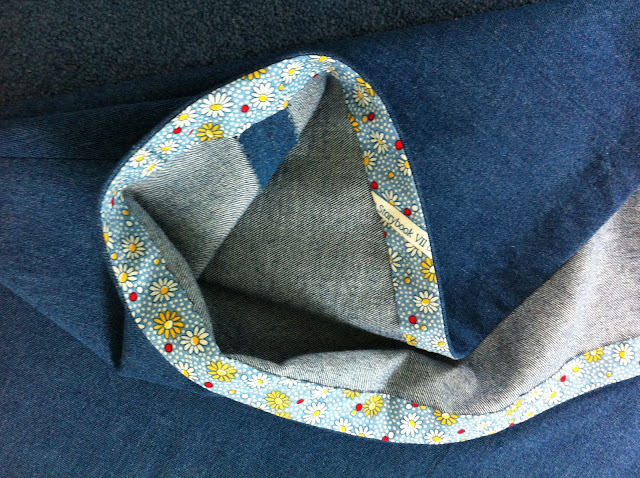 You just line up the raw edge of the bias binding with the raw edge of the hem, right sides together and pin in place. You then whizz along with the sewing machine all the way round, following the crease of the bias binding which is about a quarter of an inch in from the raw edge. Press and then simply fold up the bias binding to the inside and hand stitch the folded edge in place. Very neat and unbulky. It's worked particularly well with this skirt, as denim is a heavy fabric to make turnings in. I wasn't sure that a fat quarter would make enough binding but it did, although it had to have joins, of course.

I like these frippery touches that are outwardly invisible and arguably unnecessary - they give the skirt a kind of "made with love" feel and a satisfyingly "finished" appearance, to my mind anyway.

I am now on a roll and may never buy a commercial skirt pattern again! If anyone else feels like Tigger on his branch, reluctant about jumping off and making to measure instead of following commercially prepared instructions to make something like this, I can only echo Roo's gleeful encouragement "Come on, it's easy!" And I hope that, like Tigger, you will have a go and find out "how easy it was"!
Posted by Thomasina Tittlemouse at 09:42

Email ThisBlogThis!Share to TwitterShare to FacebookShare to Pinterest
Labels: Sewing