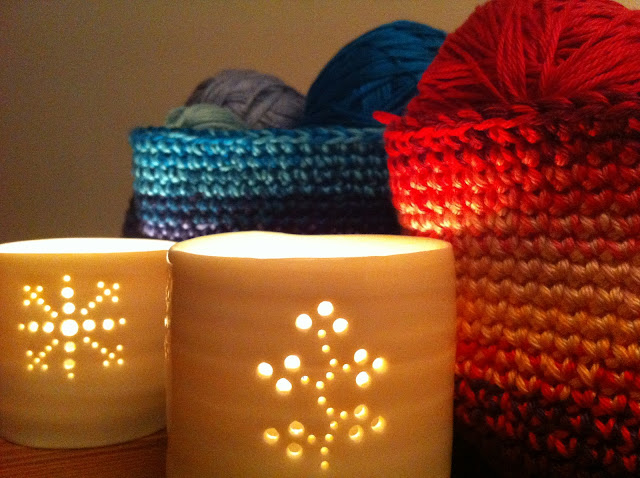 The other day I saw a pattern for crocheted bowls on Jacquie's blog, BunnyMummy. It's a clever twist on the basic principles for crocheting anything in the round, like the base of a bag or hat and, if you will forgive the pun, I was well and truly hooked. By using a double strand of cotton yarn, as the circle becomes three dimensional, it holds its shape to be self-supporting enough to make a bowl to put your yarn or fruit in rather than being soft and flexible for a bag or a hat. The cotton yarn has less stretch and "give" in it than wool or acrylic and by using it double and on a small hook the crochet keeps beautifully tight with just the right amount of stiffness to hold itself up without the need for any additional support. You can find the pattern here. 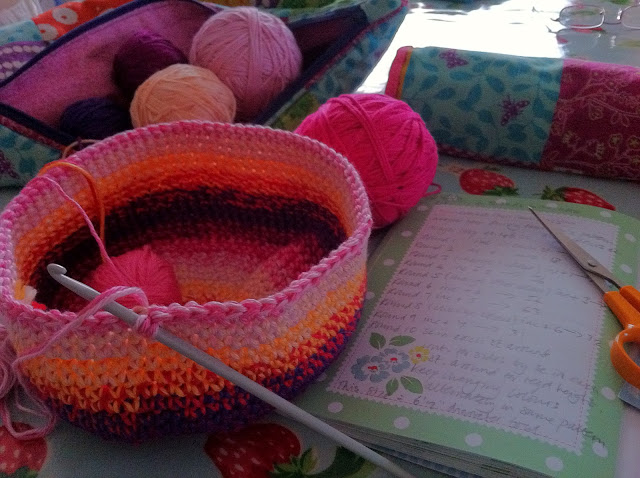 By using every spare minute I've had this week, I've made two of these so far and I love them! Mine are slightly bigger than Jacquie's (I just worked a few more increase rows before working up the sides without any increases) but I have used her principle of changing the colours one strand at a time so that they blend nicely into one another. The stitch is just straightforward single crochet (US terms) / double crochet (UK terms) and the pattern is easy to follow and to adapt. 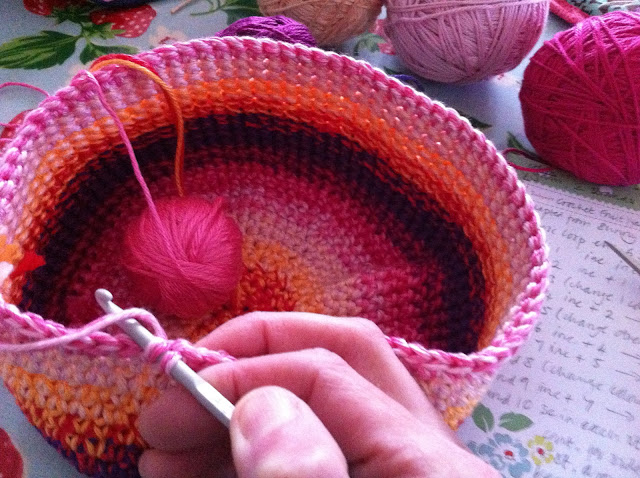 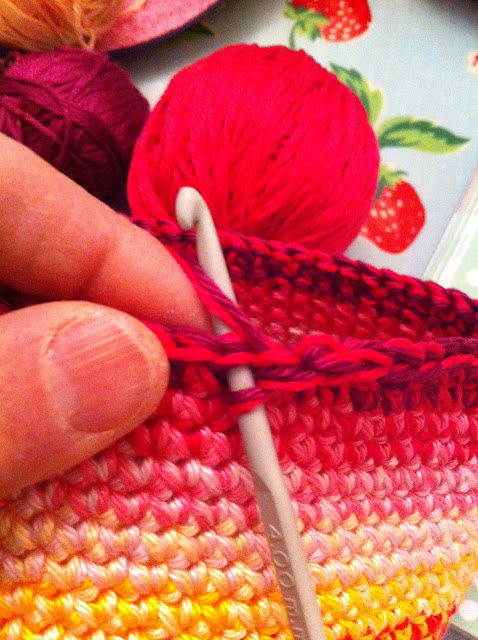 It's a bit stiff working with a double strand of DK weight yarn on a 4mm hook but you kind of get used to it and it helps if you put your hook in at an angle like I am doing here in the pic above.

This is my first effort in a symphony of blues. As you can see, if you look carefully, with some of the stitches I've missed going into both loops, giving little lines here and there. On my second attempt, the sunset / sunrise coloured bowl, I managed to avoid this. I think it's one of the hazards of working with a double strand so one just needs to be careful to go into the whole of each stitch as you work it. With the mottled overall effect I don't think it shows too much though. 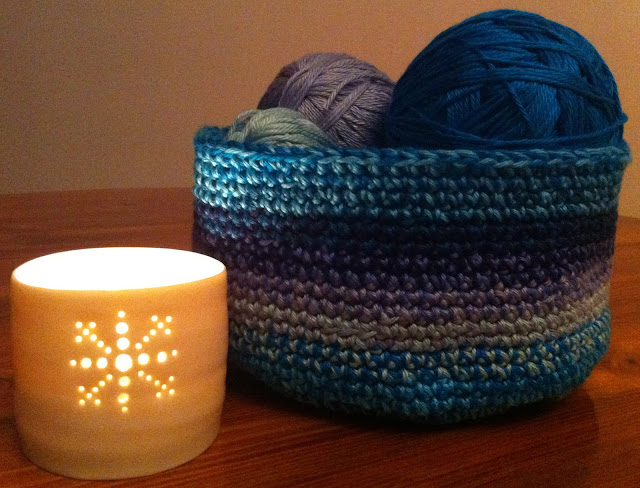 The yarn I've used is Cascade Ultra Pima which comes in the most fantastic range of jewel shades. It has a slight sheen to it and is a dream to work with - no splittiness or awkwardness to it at all unlike some cotton yarn which can get quite raggedy on the hook. The only drawbacks are that it's not particularly cheap (for which, read, "not at all cheap") and it comes in those wickedly beautiful skeins that require Winding Before Use. I had quite a bit left over from my Japanese Flower scarf which, fortunately for this project, was therefore already purchased and wound!

When I was new to crochet I tried to use one of these skeins without winding and the cat's cradle that resulted in seconds was unbelievable to behold. If it hadn't been so expensive I'd have been tempted to bin the whole mess, but as it had been rather expensive, many hours and a lot of cursing and huffing and puffing followed, while I unravelled, painfully and slowly, what had only taken the blink of an eye to change from a smooth skein, lying innocently flat and serene on the table, to impenetrably tangled spaghetti with malign intent. So be warned, if you are a novice with skeins, and do not be tempted to take a shortcut with them - they do not like it and nor will you!

Not possessed of one of those handy "winders and swifts" or whatever they are called, I find the best method is to use two upright chairs, placed back to back and slightly apart and to place the carefully opened up skein in a loop round both backs. You can then find one loosened end and begin to wind the yarn into a ball. It's tiring on the back as I find I have to stand leaning over the chairs in order to keep the yarn flowing smoothly and not pulling away more than it should, but it's worth it with this stuff. 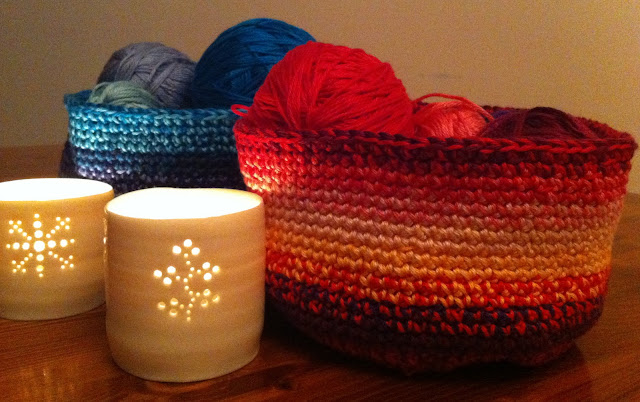 I am now on a third bowl experimenting with more clearly defined stripes which I want for something on Sunday so I've got to get a move on! Hope no one's expecting any supper this evening!

Posted by Thomasina Tittlemouse at 18:32