In My Kitchen In January

I've wanted to join in Celia's inspired "In My Kitchen" series for a while. It's a lovely way of keeping a record of what goes on in the heart of a home. And you can tell a lot about the the weave of what's going on in the rest of life, way beyond the kitchen, from the ordinary warp and weft of kitchen doings.  I love the hidden stories that such everyday things tell. As January is nearly over and it would be nice to look back at a year's story of what's been happening in my kitchen at the end of 2013, I am posting this only just in time but better late than never!

The story my kitchen has been telling in January is through...

... Nürnberger Elisenlebkuchen made according to a German recipe I found here in my search to recreate those delectable, soft, German, spiced cookies that sometimes come in lovely musical box tins which play "Silent Night". I have tried my hand at various Lebkuchen recipes over the years but until now, have not got it right. I discover that the secret is that the "echt" version contains no flour and a lot of candied peel. Although my German is sketchy, I think I have more or less figured the recipe out correctly and the results are extremely moreish. Just as well as the recipe made over sixty cookies! The biscuits sit on round wafers called "Oblaten" which, if you are in the UK, you can get from the German Delicatessen here. They are a bit like the large priests' wafers used at Mass. You could always use rice paper, torn or cut into squares as an alternative. You need something though, as the Lebkuchen are soft and quite sticky. They should be kept in a tin before eating and they do improve over time although they are extremely good straightaway, if you are greedy, like Mrs T, and can't wait for them to mature for a week before trying them! 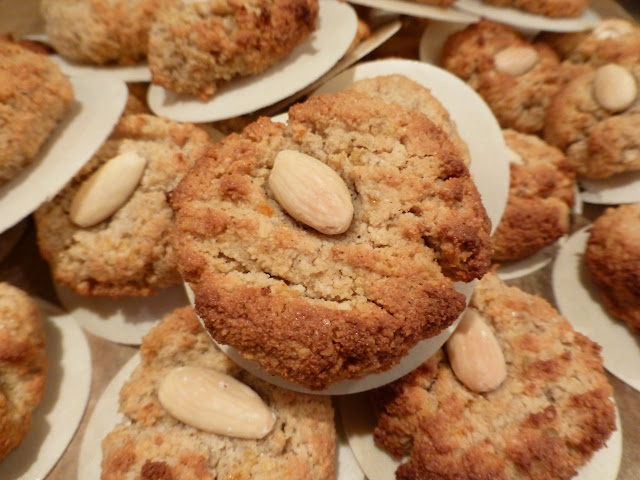 ... My Procrustean chopping board! Procrustes was a very unpleasant individual in Greek mythology who forced his guests to sleep in a particular bed. If they were too tall, he cut bits off them and if they were too short he stretched them on a rack. Nasty. Like all the best stories it has an underlying message and the myth is alluding obliquely to the human desire to make the world fit ourselves rather than the other way round. Not good. Anyway, I digress! My chopping board is Procrustean because although I don't stretch it, I do keep chopping bits off it! I bought it originally from the market in Sansepolcro, in Umbria, about ten years ago to replace an old mahogany one my grandfather had made my grandmother in the 1940s. Used by her, and then me, everyday, it gave way under the strain and had to retire, at least from everyday chopping duty. This one was a bit of a bargain but it was too long and rather heavy so it had an inch sawn off the end. The truncated version was just right but unfortunately constant use and washing and then drying on a drainer that does not drain very well, had caused it to split and worse, develop a most off-putting culture of black mould. In her January mood of noticing and clearing up mess and clutter, Mrs T held up her paws in horror and decreed another inch had to be sawn off! So here it is, still with some visible splits, but hygienic again and I am trying to allow it to dry, after use, more carefully. 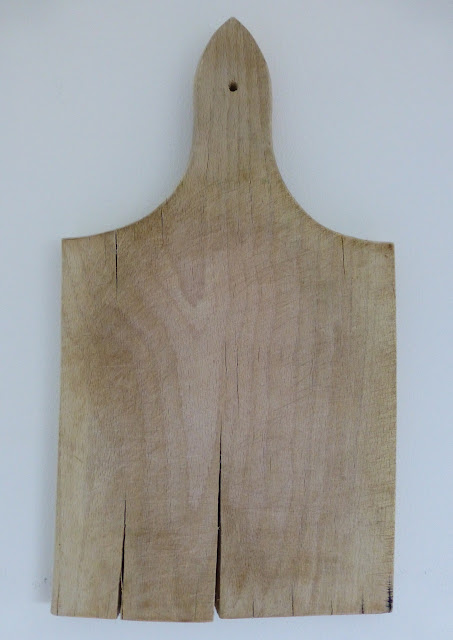 ... Carrot and red lentil soup with dill - snow food when everyone was home and hungry and I couldn't get to the shops. Very good actually. Just an onion, a bit over a kg of carrots and about 100g red lentils cooked in the pressure cooker for five minutes with a litre of homemade stock and blitzed to a nice, thick, comforting puree with a bunch of fresh dill, past its sell by date, but still apparently in the land of the living. 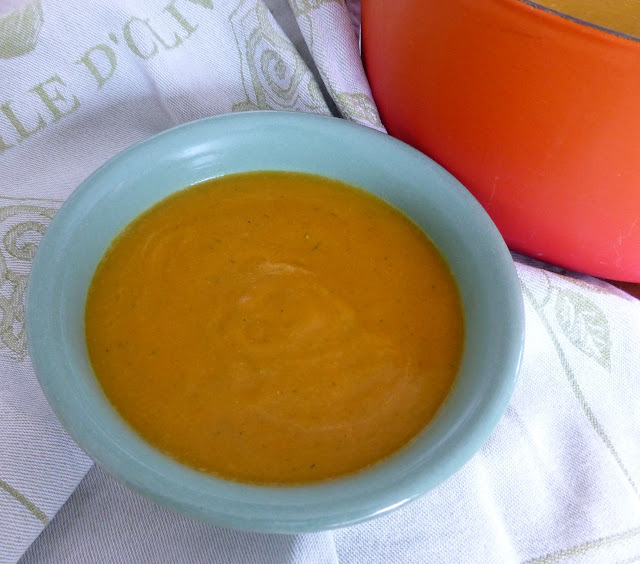 ... Chai latte spices mixed according to Anne's wonderful recipe here waiting to be made into frothy chai lattes like the one below. 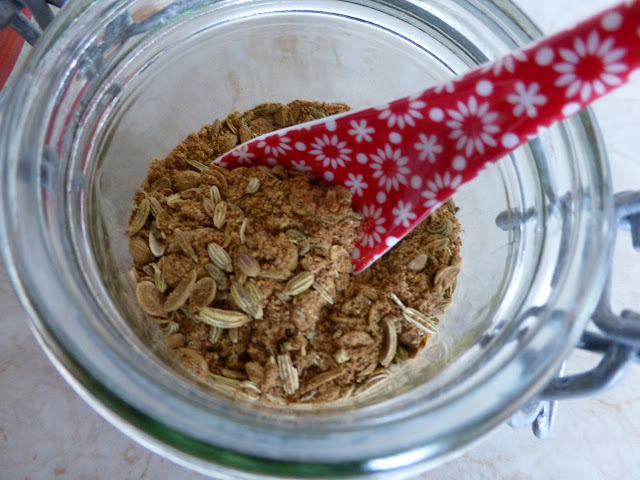 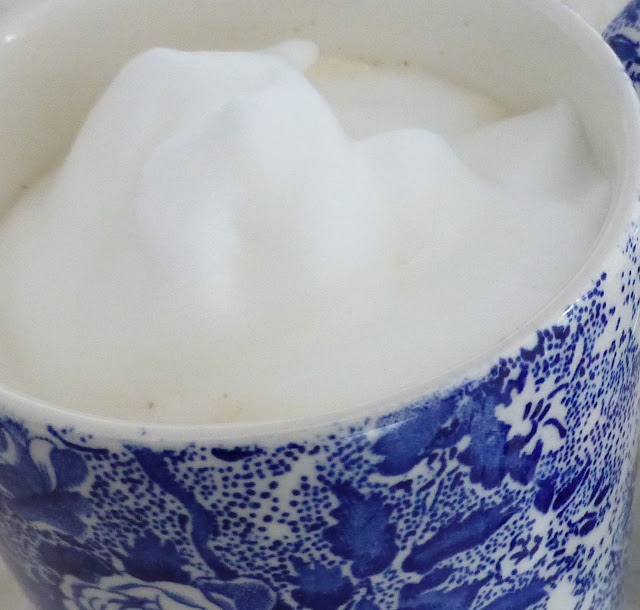 ... Tins too nice to throw into the recycling bin. I confess it, I am a sucker for nice food packaging. I buy both olive oil and wine because I like the labels as much as for the contents! The French olive oil tin came from Waitrose and the olive tin H brought back from his Greek trip in the autumn with the fattest and most splendid kalamata olives inside, that either he or I had ever seen. Now that both oil and olives are spent, the tins are sitting on my kitchen windowsill while I wonder what to do with them. Possibly I might grow herbs in them. They are far too jolly to throw out, anyway. 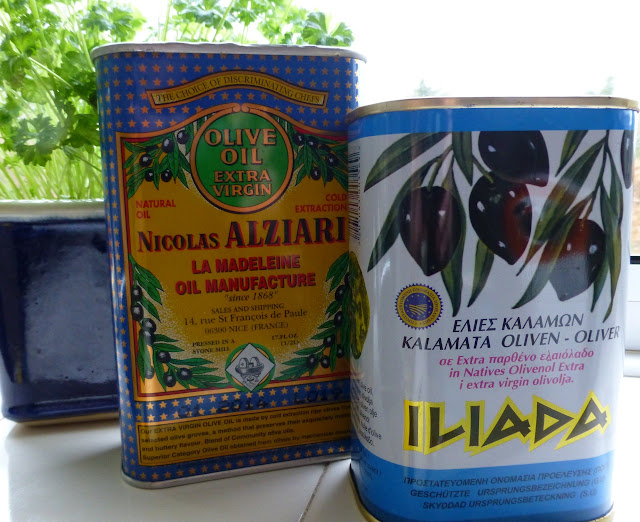 ... I said I was a sucker for packaging! This is a special edition ceramic Marmite jar that contains, not Marmite, although it did originally hold a tiny pot of the stuff when I bought it, but newly-whizzed-up porridge oats which I blitz in the food processor, a bag at a time, to make my own version of instant porridge for breakfast on winter mornings. Much cheaper and nicer than any commercially produced, "instant hot oat cereal". Normally I am in too much of a rush to add anything fancy but there is always time for a quick swirl of maple syrup as in the pic below! 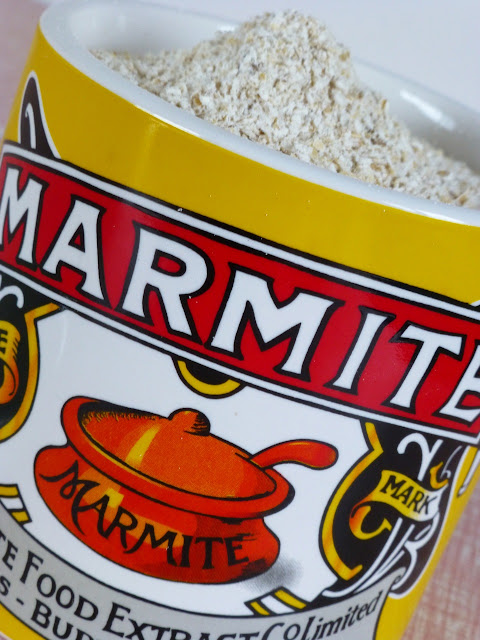 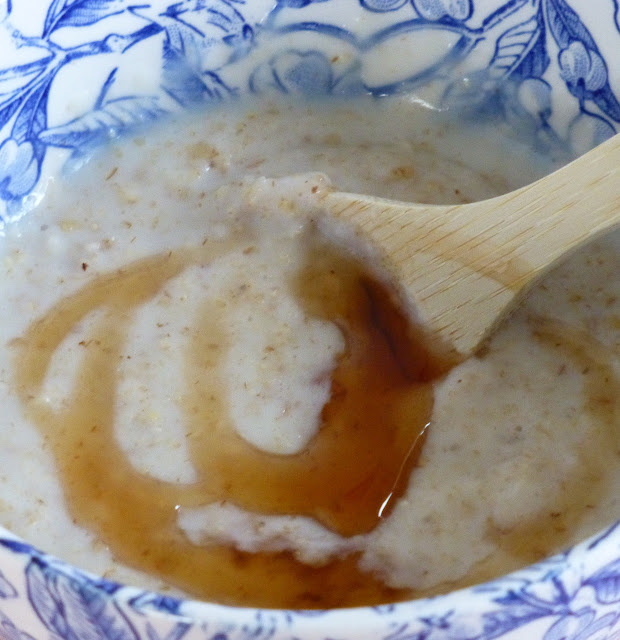 ... My new hyacinth-blue, flower-pot jacket, that I crocheted to cover a pot of budding hyacinths brightening a corner of the kitchen work surface. I used the remnants of a skein of beautiful, variegated Noro Light Silk Garden yarn left over from a recent make and I'm rather pleased with it, not least because I designed it myself and it worked! 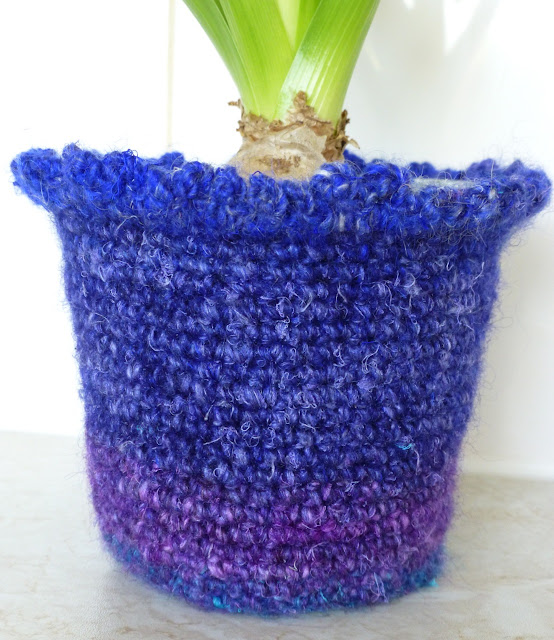 Have a look at Celia's inspirational blog Fig Jam And Lime Cordial for her wonderful culinary explorations and to see what is going on in kitchens round the world!


Posted by Thomasina Tittlemouse at 13:15