In My Kitchen In March

Joining in with Celia's In My Kitchen series here, in my kitchen, in March, have been:

eggs - a sudden early Spring glut from the bantams who are now laying for Britain after a bit of sabbatical during the winter. I especially love the speckled shells although I've no idea what makes some shells speckled and others, from the same hens, on the same diet, plain. 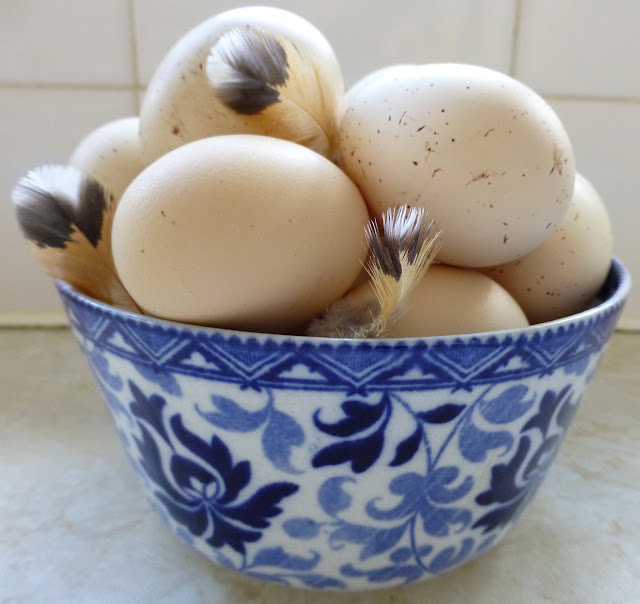 and as a result of all the eggs, sponge cake with strawberry and mascarpone filling - very easy and absolutely delicious - tip a pot of homemade strawberry jam and a tub of mascarpone into the food processor and blitz just enough to combine, before sandwiching a pair of sponge cakes together with the resulting dusky pink, strawberry-scented cream. A sturdy spoon and a strong arm would probably do the job without the food processor but Mrs T is lazy and this month is rather short of time. And using the food processor meant that there were scrapings to be gleaned and tested just to make sure the mixture was as good as it looked! (In case you're wondering, it was!) 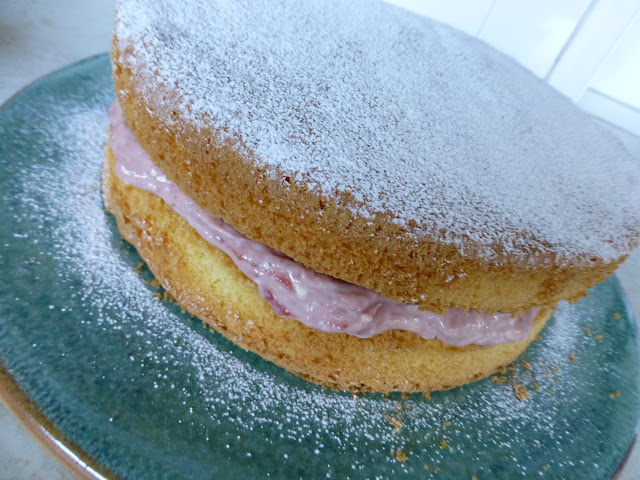 blood oranges - I adore the colour of these and have been squeezing them for breakfasts most mornings. I don't think their vitamin content is any different from orange oranges but I feel they ought somehow to be more packed with good things on account of their vivid crimson juice; 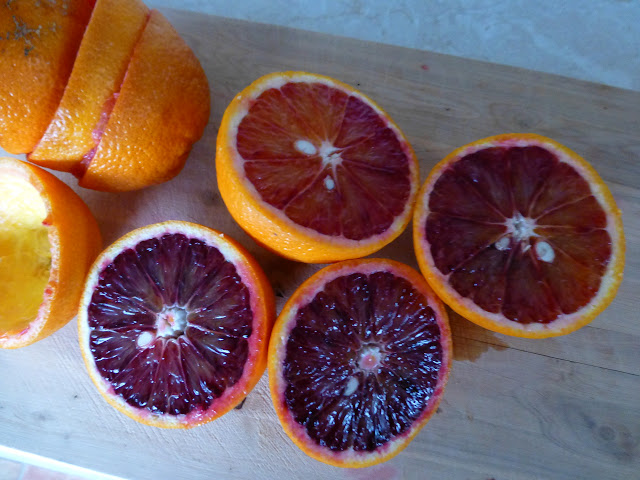 hot cross buns - I know it's a wee bit early for these but never mind. I am lazy and do not make pastry crosses on mine but simply dip a sharp knife in flour and then make cross-shaped cuts into the buns before baking. Much less fiddle, although you do need to dip the knife into the flour before you make each cut, or it gets stuck! I make my buns according to a variation of Delia Smith's recipe - half wholemeal flour and half white and adding two teaspoons of cinnamon and one of mixed spice as well as a good grating of nutmeg. I only use currants as the dried fruit. I don't know why, especially as of all dried fruit, currants are probably my least favourite - I much prefer sultanas, say, or golden raisins, but in hot cross buns they just feel right, so currants it is! 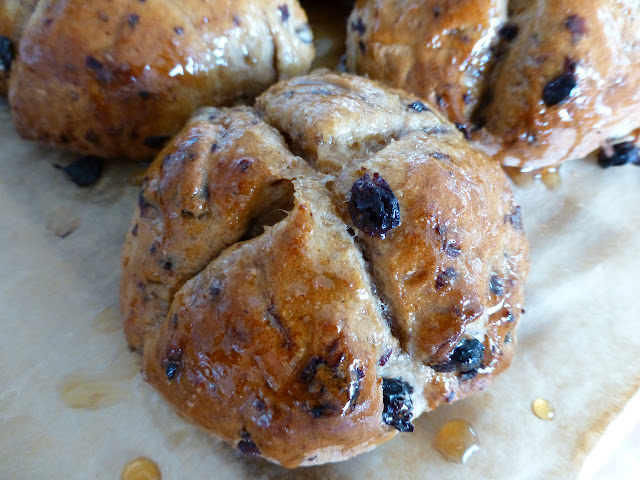 hooky potholders with daisy-shaped fabric appliqués - Astri got me into making these in her post here and her two previous posts. I really like the combination of crochet and fabric and they are curiously satisfying to make. Partly because they hook up quickly and partly because the fabric appliqués work surprisingly well on the crochet even though you might think they could be tricky to do. I did use Bondaweb to iron the daisies on first before zigzagging round with my sewing machine in case they "walked" but they've slotted into place as thought they were born there. The double layer of crochet combined with the appliqué layers also means they are very ergonomic in function. 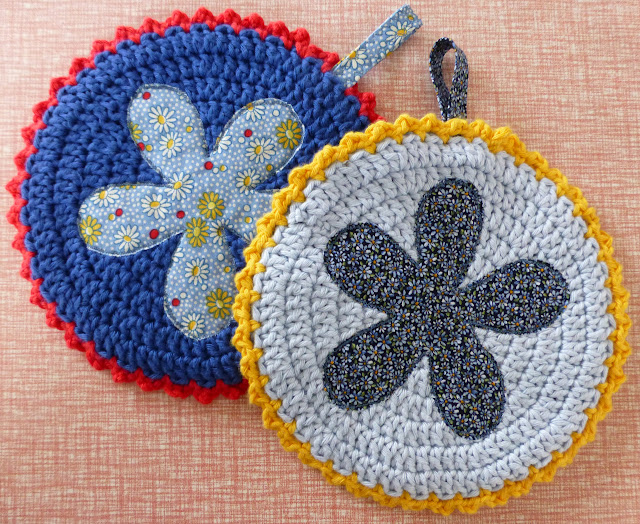 I made them in Puppets 8/8 cotton - like my heart-themed dishcloth  - in assorted colours, on a 4mm hook. The loops are made from off-cuts of homemade bias binding and are stitched in place with a little judicious three-step zig zag stitching before I joined the two crocheted discs together with Astri's neat picot edging. With a little careful hook-work I managed to use the missed stitches in the edging pattern to cover the place where the loops are attached so that the edging runs without interruption, at least on one side. They are washable, cheerful and practical - I love things like this in my kitchen!

homemade shampoo bars curing in my saucepan cupboard, on slatted racks lined with greaseproof paper. The saucepans don't seem to mind and no one has complained that their pasta or soup tastes of the strong aromatic scent of rosemary, lime and euclayptus that currently flavours the shelves! I have been dabbling in soap-making recently and these are my latest creations. I'll post a bit more about making them when they've cured fully and I've seen whether my hair likes them! 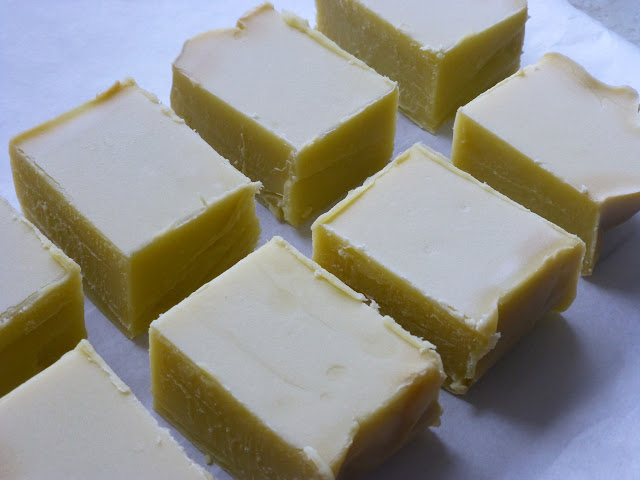 Spring flowers sitting in my new little trio of jewel-coloured, glass vases, basking in the sunshine, which through the glass of the window is now perceptibly warm, even though March, so far, has been bitterly cold here. 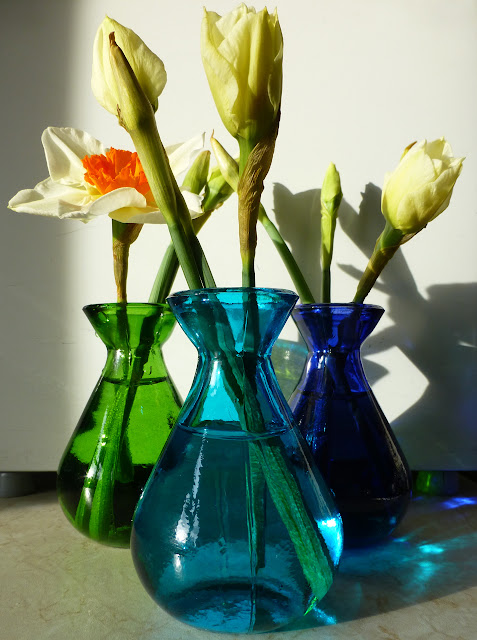 Have a look at Celia's blog, Fig Jam and Lime Cordial for a glimpse of other kitchens in March!


Posted by Thomasina Tittlemouse at 15:58