Thank you all so much for your kind and encouraging comments on my last post - I will stop worrying about posting snapshots of the landscape here from time to time!

On to other matters - bunting matters. (Yes, I do intend the pun! Bunting does matter!) Bunting always makes me happy, whether it's made from fabric, paper, wool, or anything else for that matter. It's cheerful, seasonally adaptable and can be made for any occasion or none. It's also very quick to run up, if you take the lazy route of simply cutting paper or fabric triangles, embellishing them with a catchy phrase, ironed on with Bondaweb coated letters in contrasting colours, and then stapling the triangles to a piece of ribbon or tape. I'd recommend this method to anyone suddenly bitten by the bunting-bug and wanting immediate results, but it's less good, obviously, for anything you might want to use in the slightly longer term and which, for instance, you may want to wash, after it's collected a bit of dust. Of course you may not get dust in your house but it seems to arrive rather frequently in mine!

Anyway for dust-proof, or rather, dust-busting, serious bunting you need to create slightly more substantial pennants that can go in the washing machine occasionally and this takes a bit longer in the making. I've wanted to make some proper-style, serious bunting for a while, (if you can ever call bunting serious!) There is a lot of inspiration out there and various tutorials and patterns depending on what effect you are after. Judy of I read, I sewed, I crocheted has a lovely fabric bunting tutorial here.

If it's hooky bunting you are after, then Attic 24's recent post about Bunting for Yarndale is a great starting point because the Granny bunting triangles work up nice and quickly and look so effective. Lucy is hoping to break a record for the world's longest bunting string and asking people to consider hooking up a pennant or two to contribute. Lots of people have already signed up and I shouldn't think the world will ever have seen as much lovely hooky bunting in one place before, by the time it gets to Yarndale, at the end of September! It's a lovely way too, for people who have benefitted from Lucy's amazing hooky inspiration, to give a little something back.

So, armed with Lucy's pattern, which you can find here, a 4mm hook and some Cloud Blue Stylecraft yarn, I set to. I was tempted to change colours every round and make multicolour triangles but the glimpse of blue skies and arrival of sunshine the weekend before last, made me hanker for something to replicate those sunny summer skies. Never mind blue sky thinking, let's have some blue sky bunting! 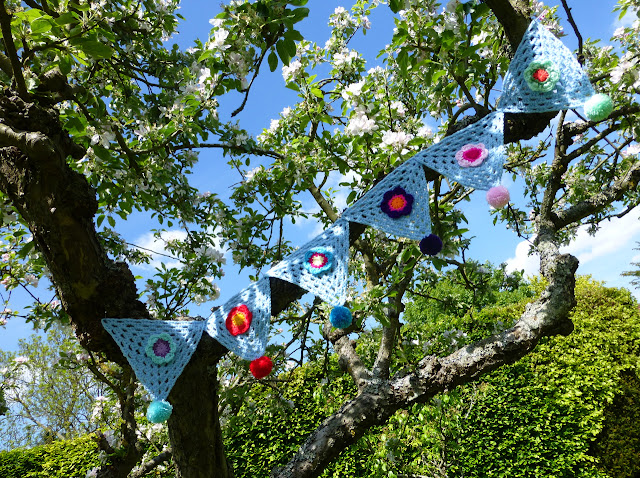 So blue sky bunting is where I've gone. Cloud Blue triangles brightened with vivd summery flowers and vivid summery pom-poms. I based the flowers on Lucy's in her pic on the Bunting for Yarndale post. I am not sure if they are identical because I made a simple pattern up as I went along, but they look similar. Three rounds, three colours - as bright and summery as I could make them using oddments of left-over acrylic yarn.

If you want to make some the same, this is what I did:

For a smaller size of flower, simply replace the treble crochet stitches with half-trebles, (half-doubles instead of doubles in US terms), in the first and third rounds.

This is such a simple flower pattern I'd be surprised if someone else hadn't thought of it first so please accept my apologies if, in what I've come up with, I am, however inadvertently and unconsciously, plagiarising anyone else's prior creation. 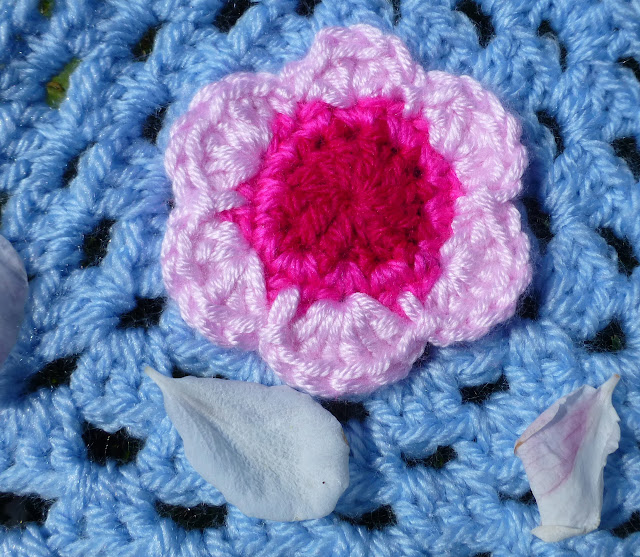 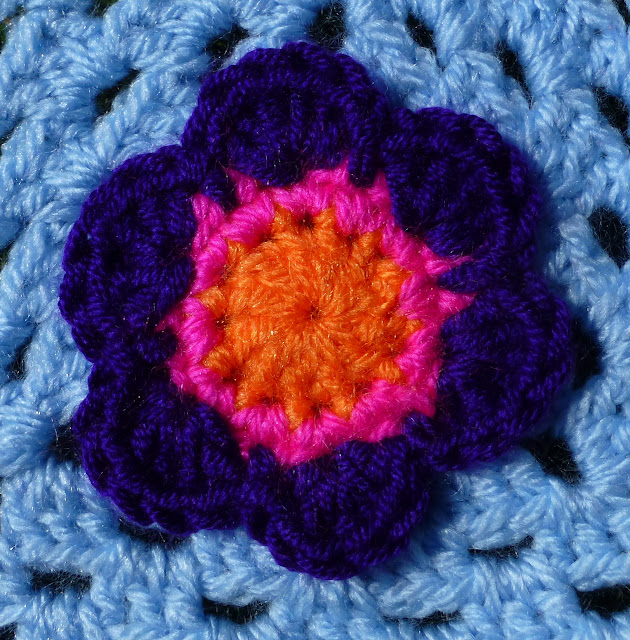 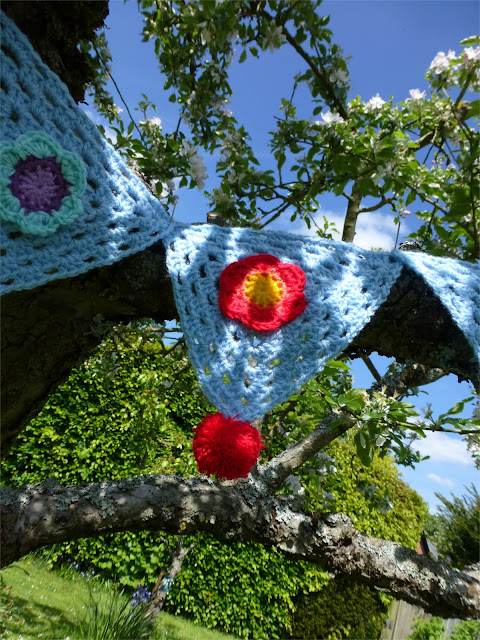 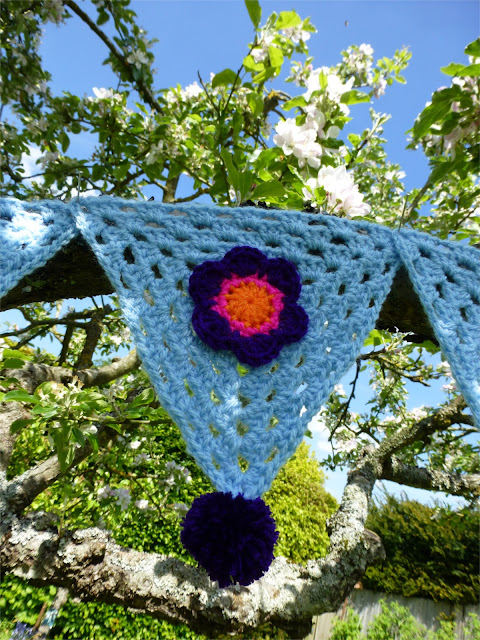 These (minus the apple blossom confetti!) will be going off to Lucy as a little contribution to her Yarndale bunting project... 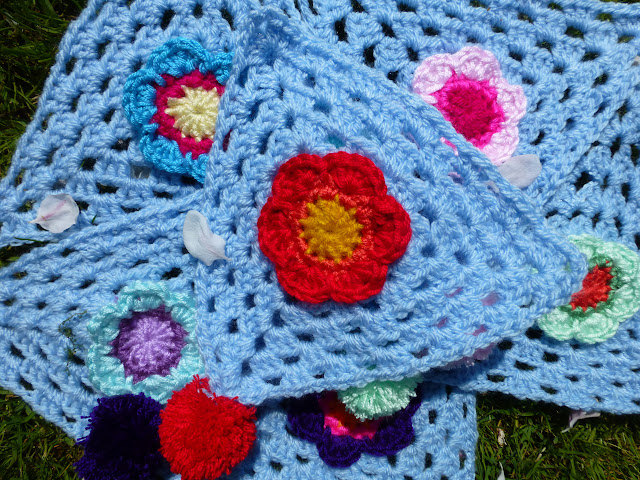 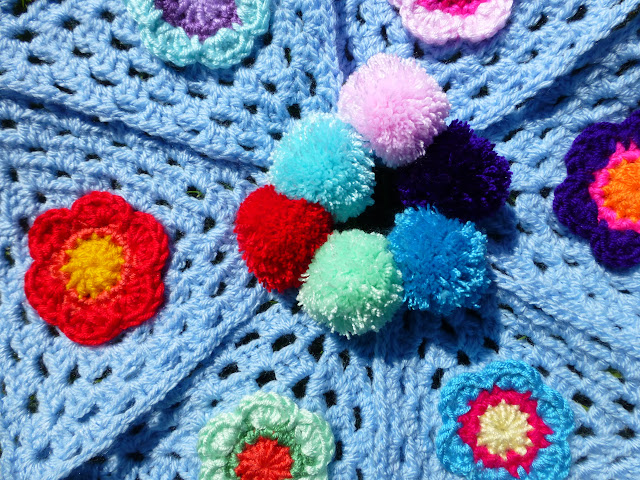 ... but once bitten, twice bunting-ed and I felt the need (as one does!) to make some more blue sky bunting to hang here.

For this I've been experimenting with some slightly smaller, more solid triangles, worked up in simple increasing rows of single crochet in Cascade Ultra Pima Cotton "Aqua" blue. 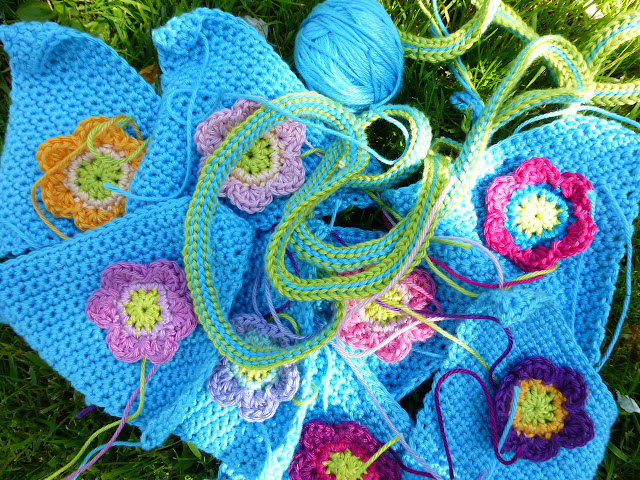 I've had to adapt my flowers slightly as the originals were a bit big for the smaller size of the single crochet pennants but I like the results, (or will do, when everything's properly blocked and assembled)! And I feel that even if summer 2013 turns out to be as grey and damp as summer 2012 or summer 2011 I shall have a little bit of blue sky and summer sunshine inside regardless. 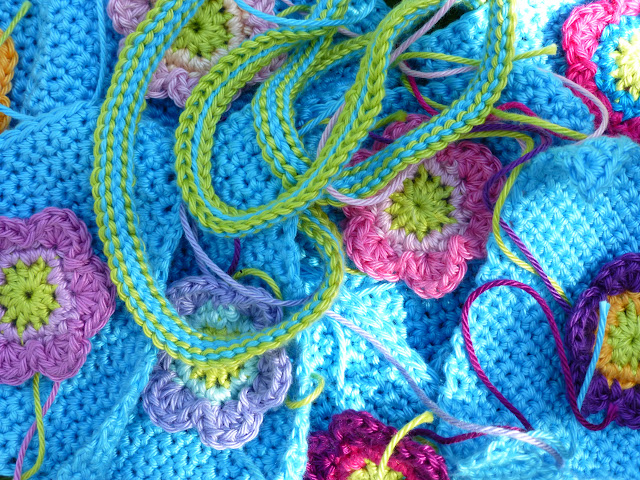 Have a bunting-good week, everyone!

Edited to add: You can make the second version, more solid, triangles in one of two ways; either by working from the top down, decreasing the number of stitches by one stitch each row (until you reach the last two and ending off) or by chaining two and increasing in each row until you reach the desired size and ending off. I used the second method as I wasn't sure how big I wanted my pennants to be until I saw them take shape. My final row has 30 stitches in it and I used double crochet stitches throughout (single crochet in US terms). There is a good pattern in Nicki trench's book "Cute and Easy Crochet" for the top-down method and an excellent tutorial on the bottom-up method here on Heather's lovely blog, Pink Milk. Hope this helps! E x
Posted by Thomasina Tittlemouse at 11:15