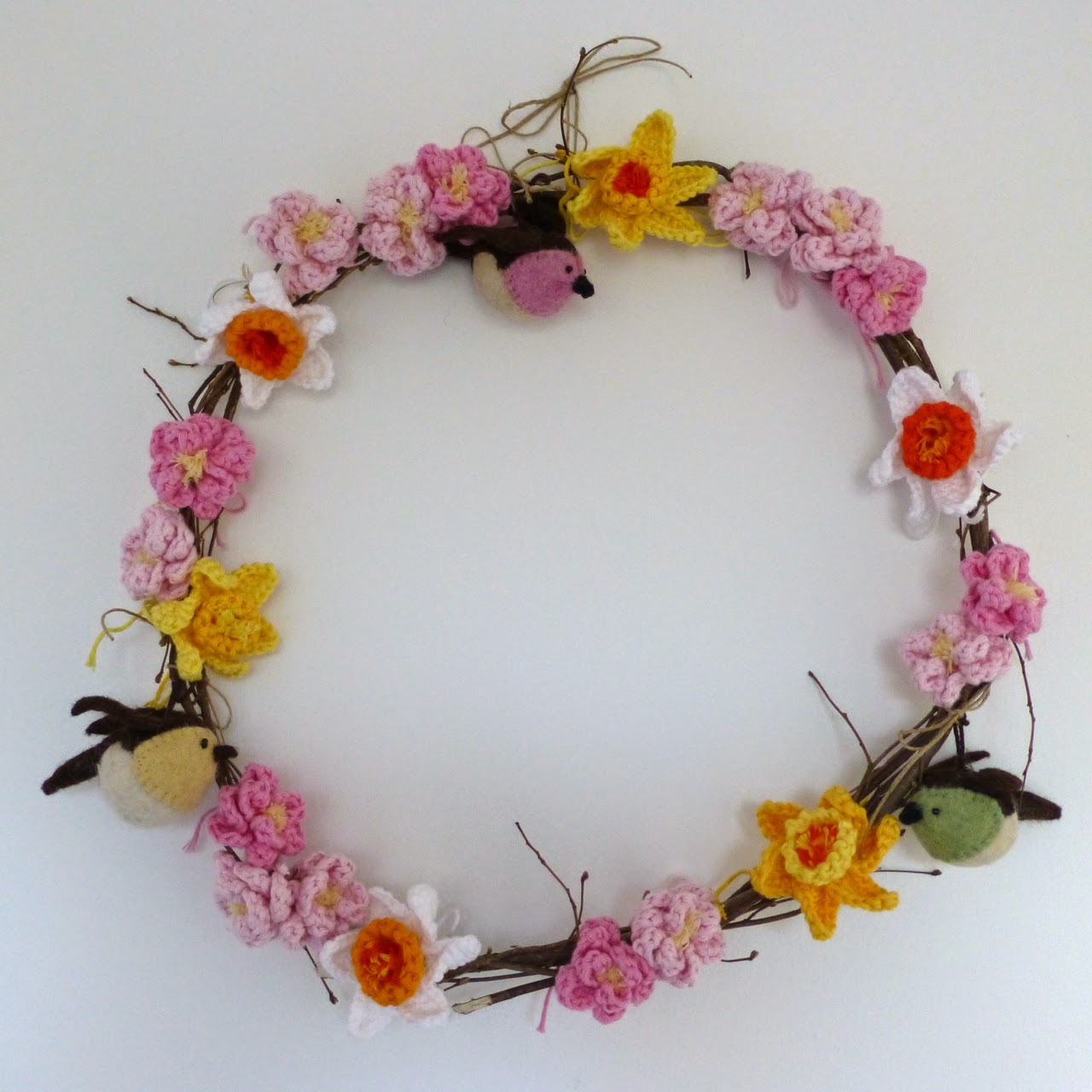 I don't normally have much time around Easter to go overboard with decorations but this wreath is pretty speedy and easy to rustle up at the last minute, so long as you have picked the twigs and dried the basic structure in advance, that is, which I did back in February. Too late for last Christmas obviously but with the thought that at least it would be ready for next Christmas. I got the idea from Anne here - she's always good for ideas like this, as well as her recipes of course. The idea is that you pick the twigs while they are green and sappy (and therefore, obediently bendy), shape them into a circle and tie in place with string, (so that they stay in a circle, rather than springing back, as soon as your back is turned!) You leave this somewhere airy and warmish to dry, for a number of days or weeks and when you want to decorate it, you simply snip off the retaining string and hey presto! the twigs have dried in circular form ready for you to decorate and hang up.

As I say, I picked my twigs - a bunch of thin, whippy, hazel ones - back in February on a bleak and rainy afternoon walk. After a brief tussle, where the twigs thought they didn't much fancy the idea of becoming a circle, I prevailed upon them to think otherwise and having tied them in place with some fetching, purple garden string, I left them by the back door near the warmth of the boiler to dry out. 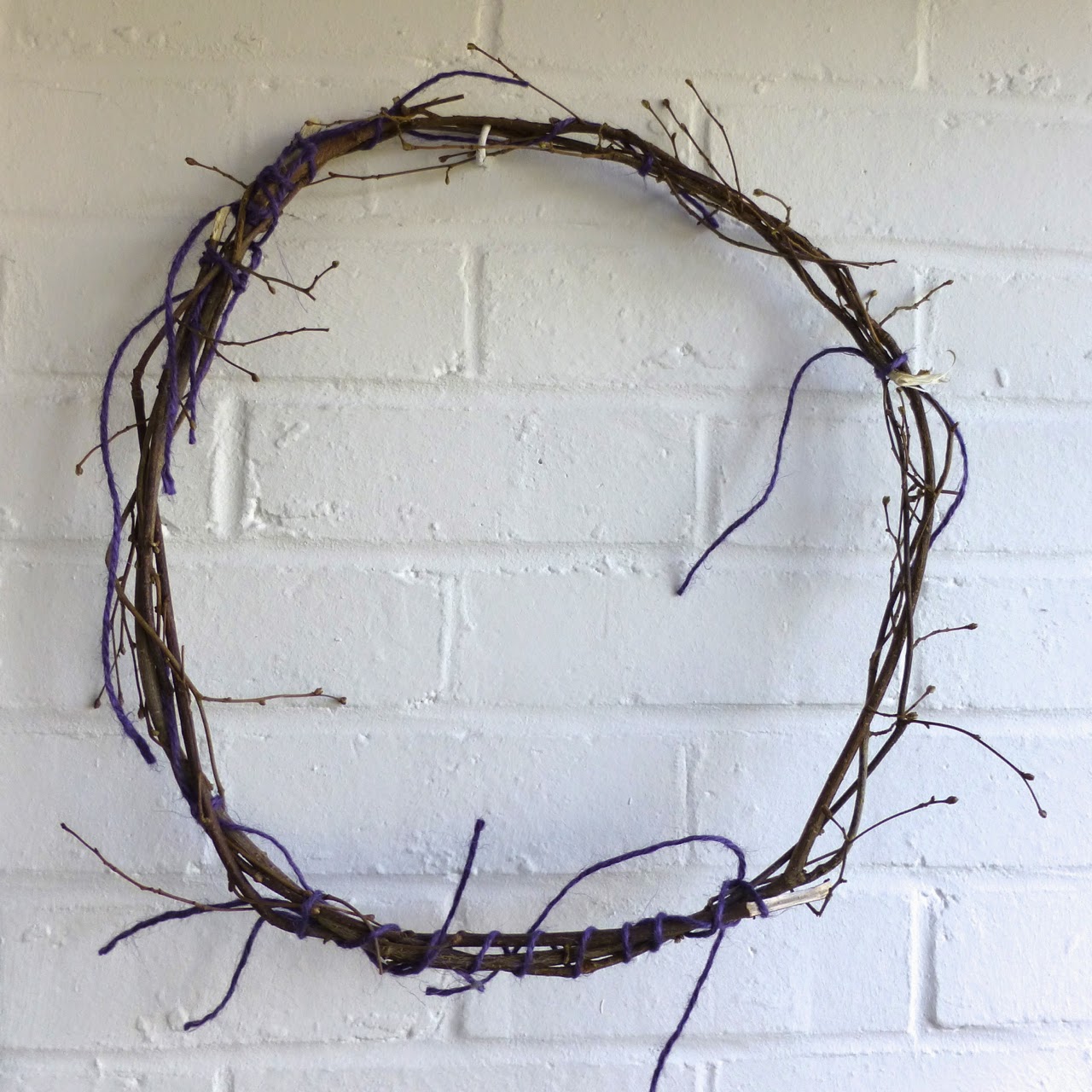 So far, so good. I felt slightly nervous snipping the string in case they decided to spring back to their original perpendicular form, despite my best efforts, but no, they stayed where they were, as good as gold! 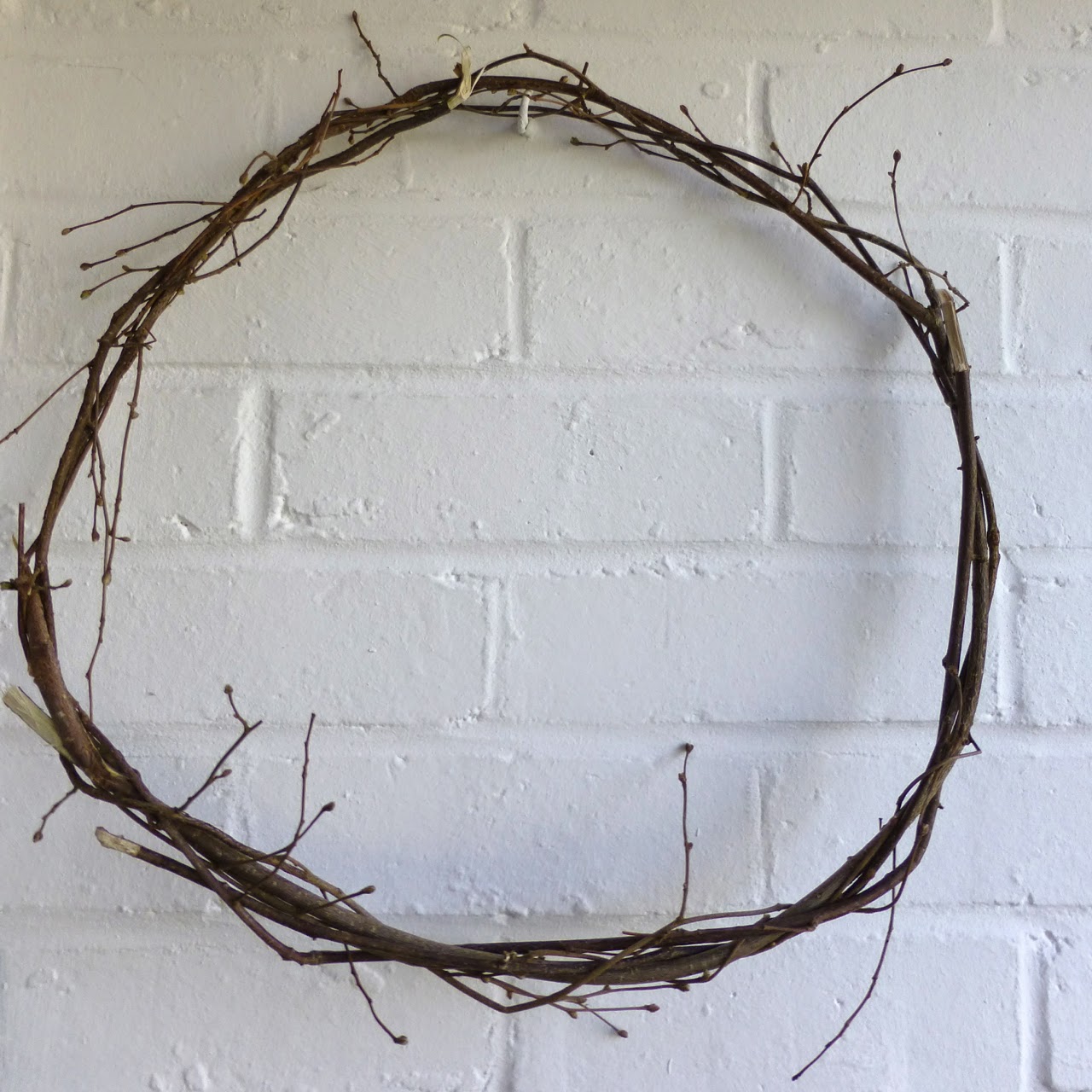 Now for the decoration bit. My original thought was to add eggs but my hooky eggs are a bit big ... 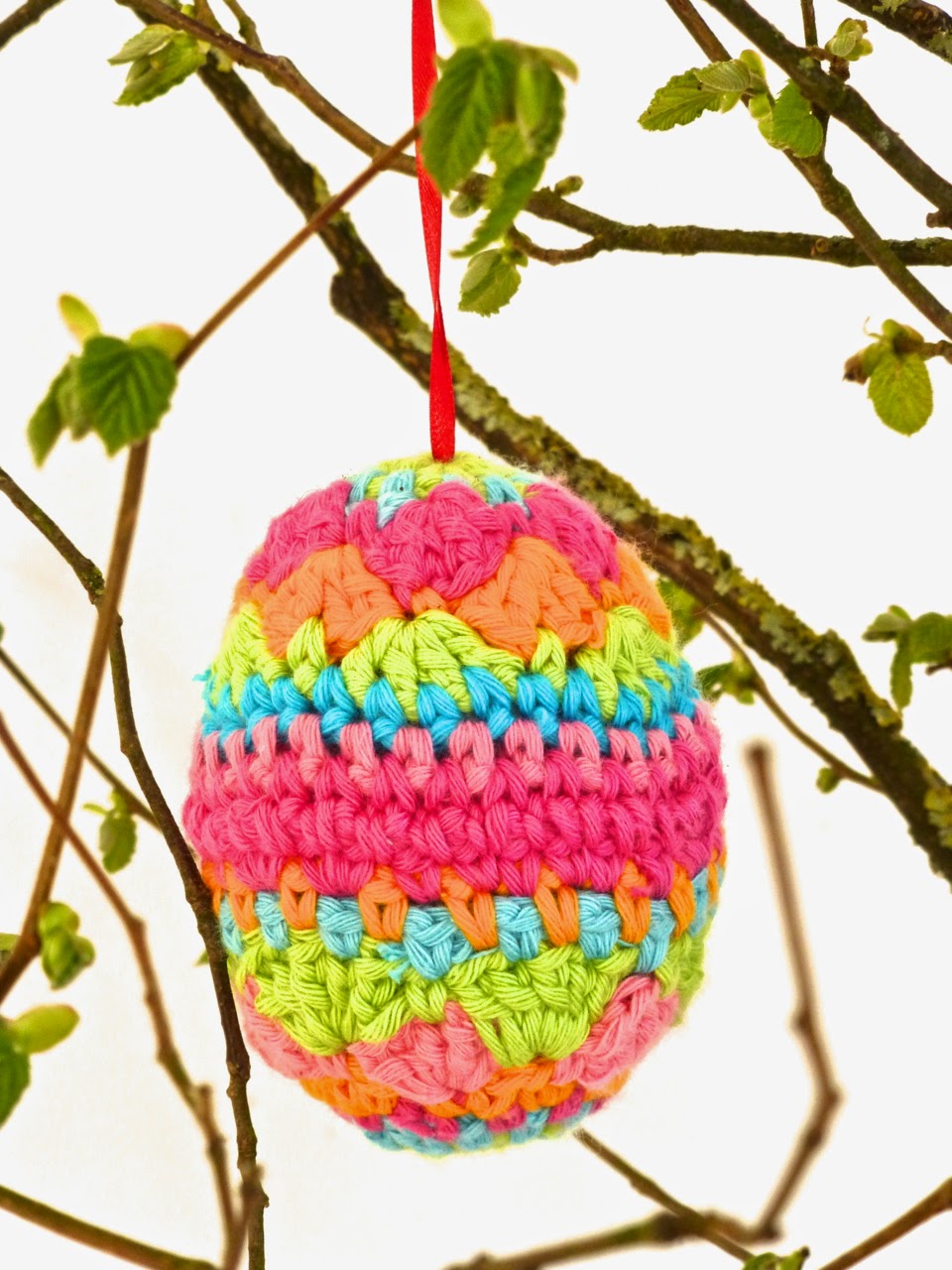 ... and I didn't have time to go hunting in the shops for miniature ones. What I did have was a whole load of crochet cherry blossoms from last year 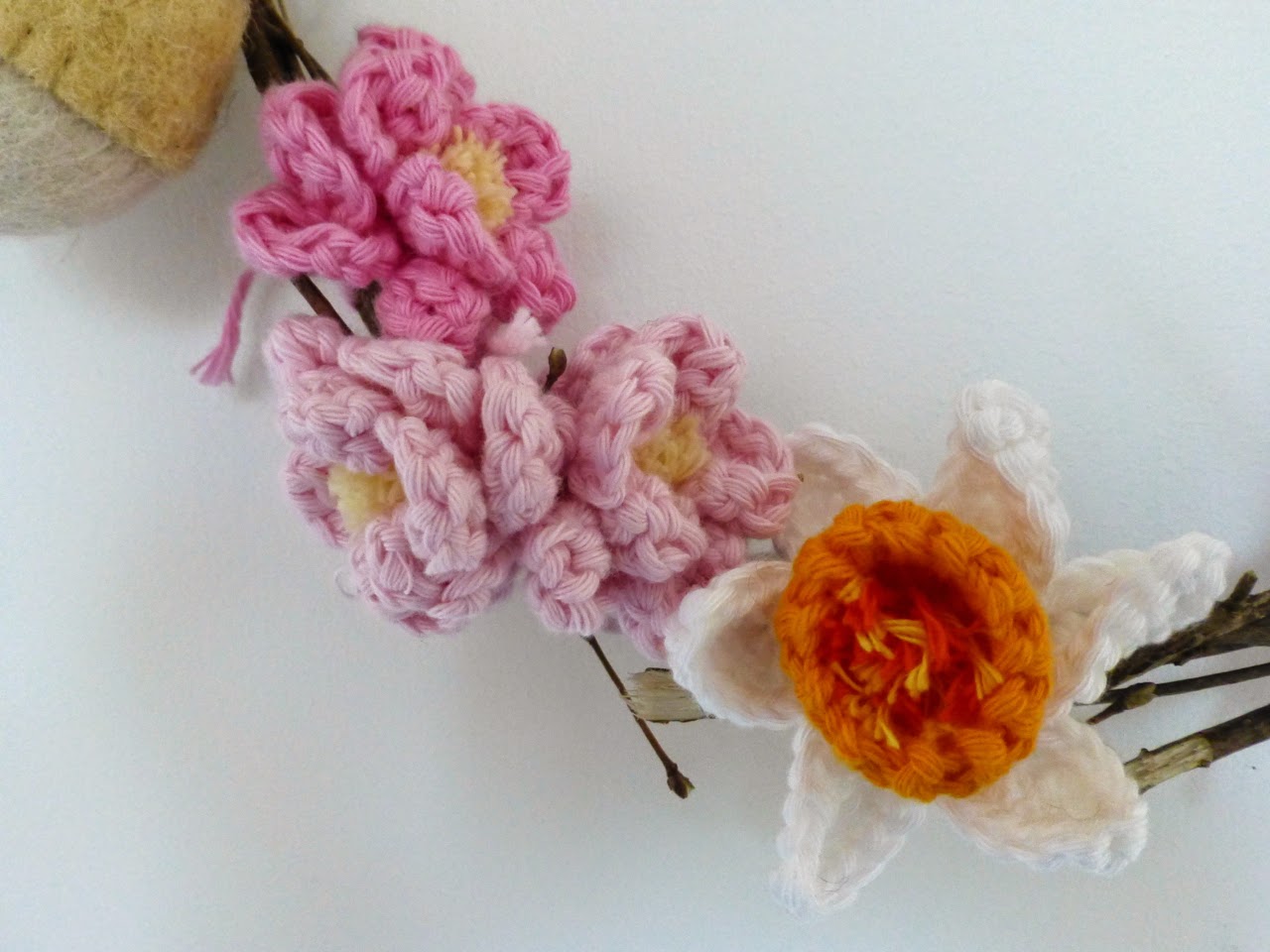 and some felt robins I'd bought a couple of Christmases ago, in a mad moment, when robins with pastel-coloured breasts seemed a good idea. Getting them home, I decided they hadn't been such a good idea - the pastel colours just weren't Christmassy. But for Easter? Well, they seemed perfect! 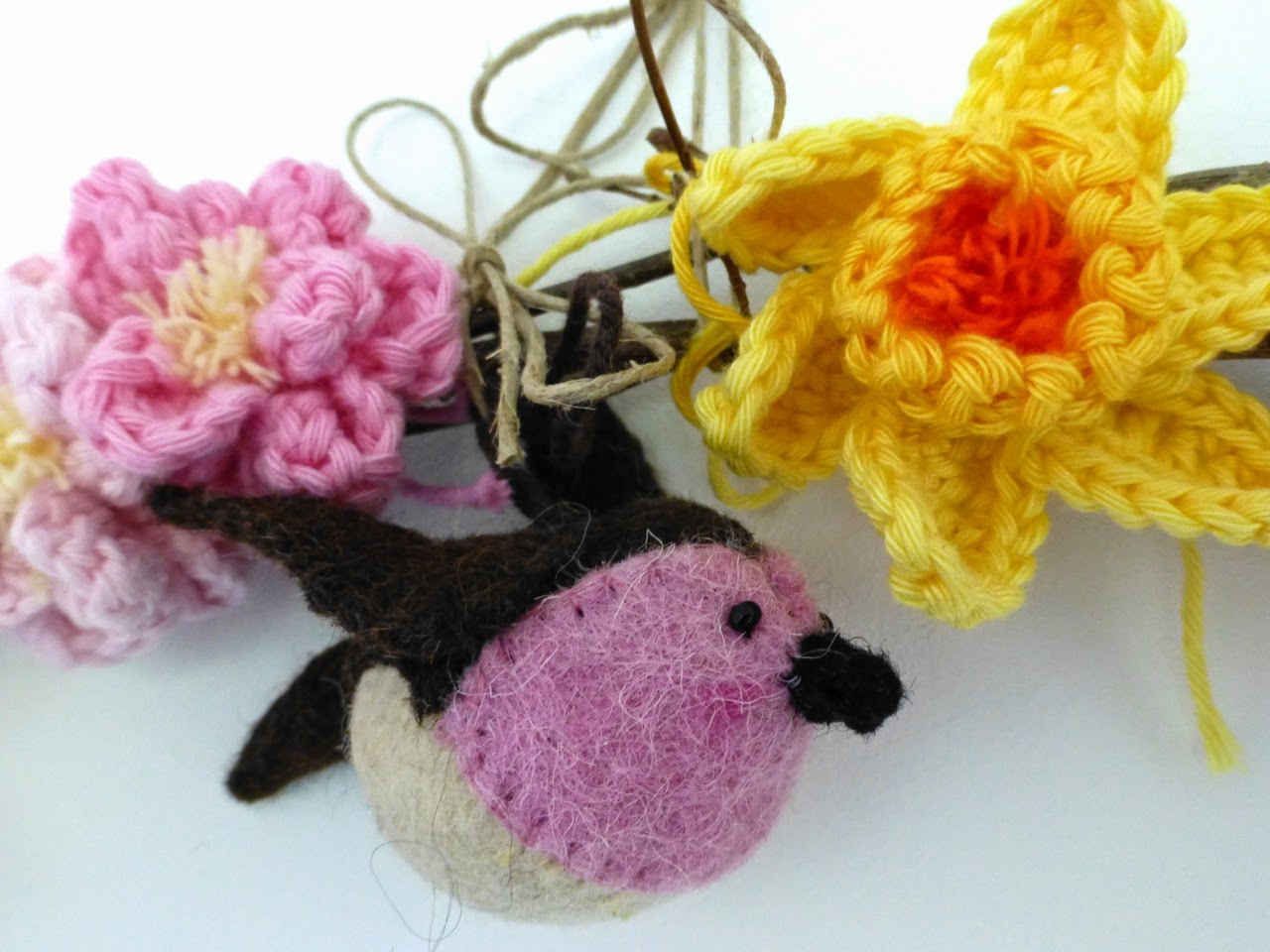 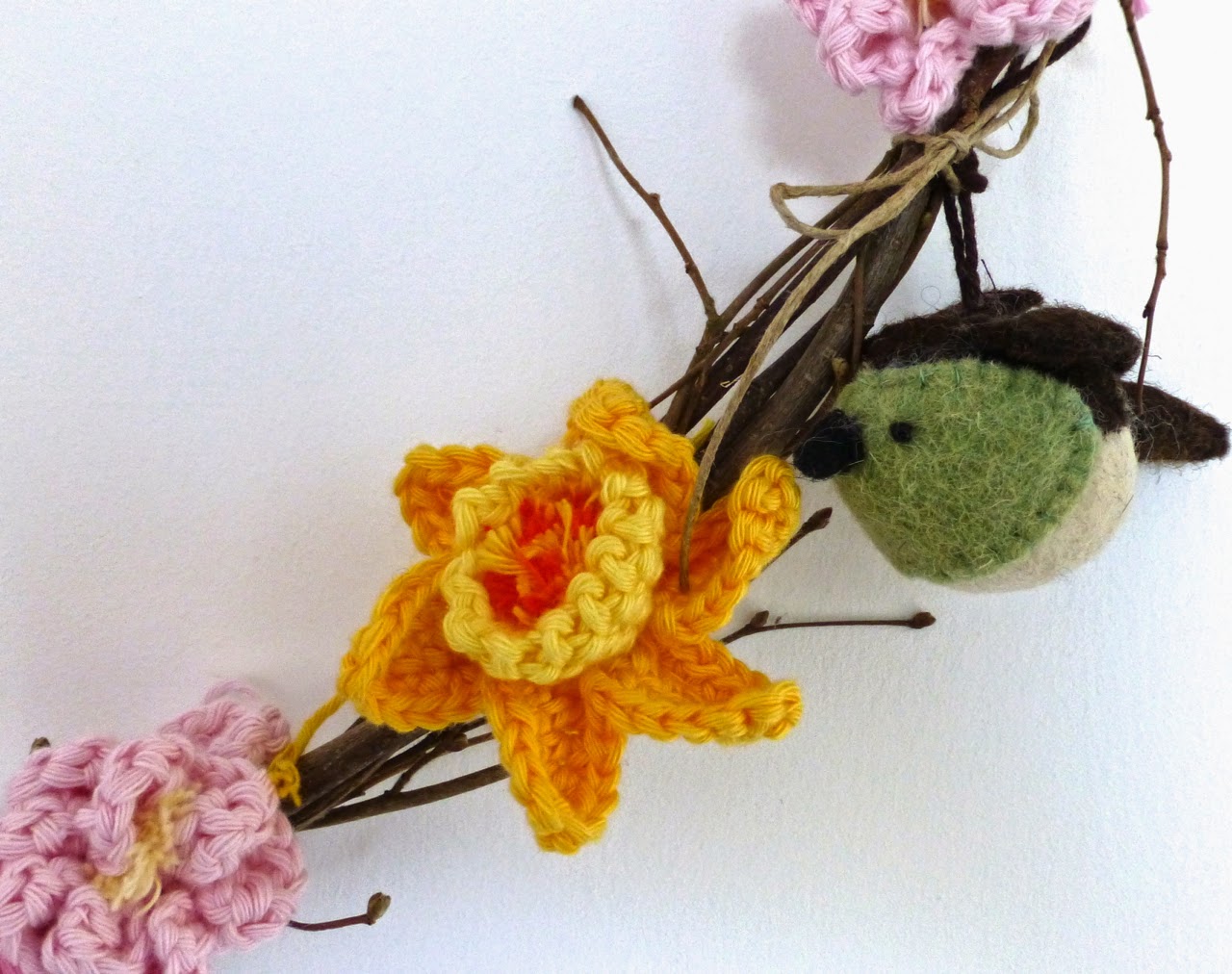 The wreath seemed a bit thin with just the cherry blossom and the robins, so I hooked up a few daffodils and narcissi from Lucy's lovely pattern here. 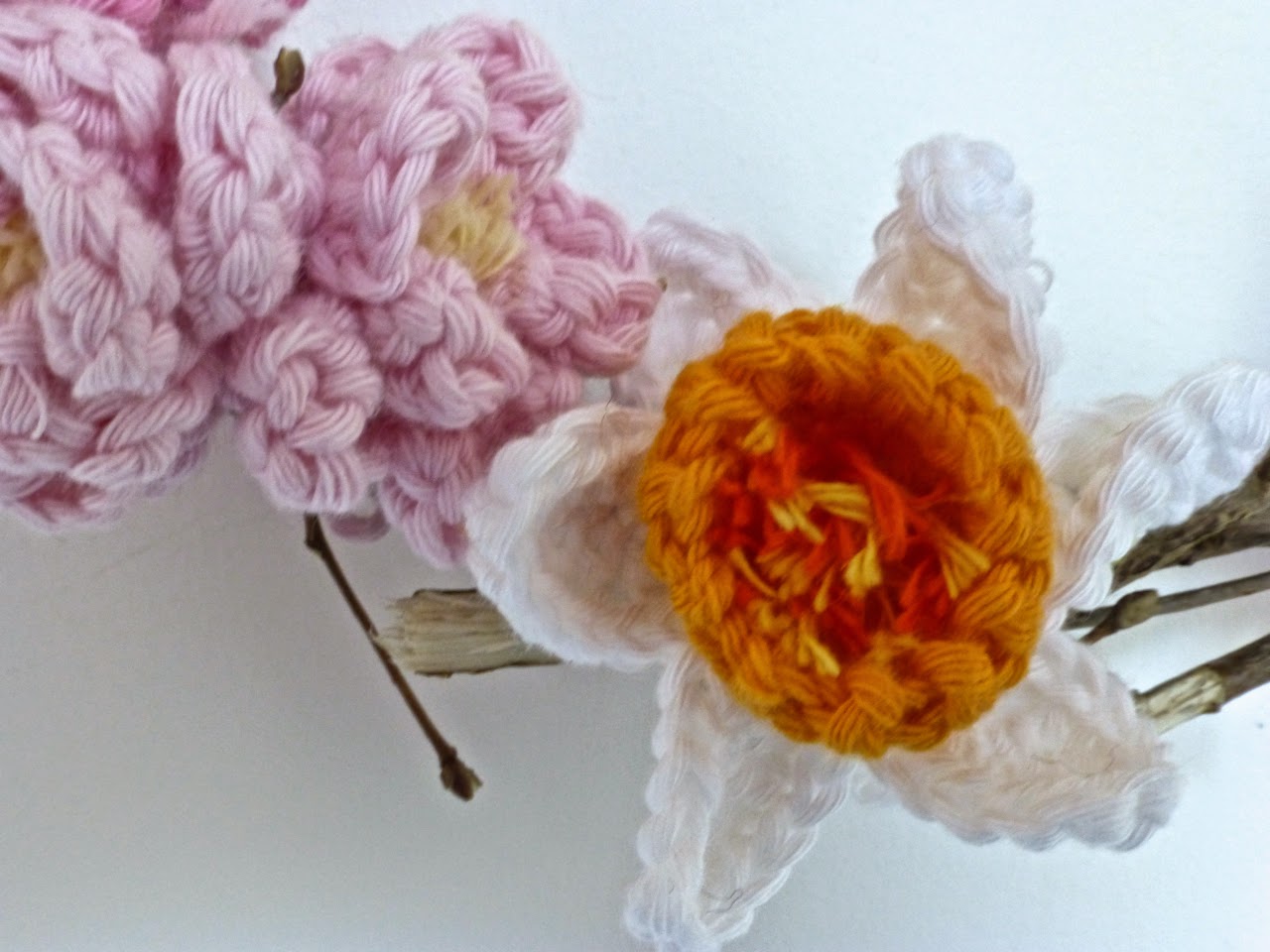 The flowers are tied on with the ends of yarn from the crochet - even better when there's a project where you don't need to fasten off any ends, I think -  and the robins I've tied on with some thin, neutral-coloured string. So easy! But also so Eastery!

I don't know how robust the twig wreath will turn out to be - the thinnest bits are quite brittle but it might well survive until Christmas, in which case I shall remove the blossoms and unChristmassy robins and replace with more seasonal fowl / flowers!

Although I often believe less is not more, here is a happy reminder that it can be. Add to the mix, blue skies, a bunch of red tulips in a red polka dot jug, on my rather battered, old kitchen table, 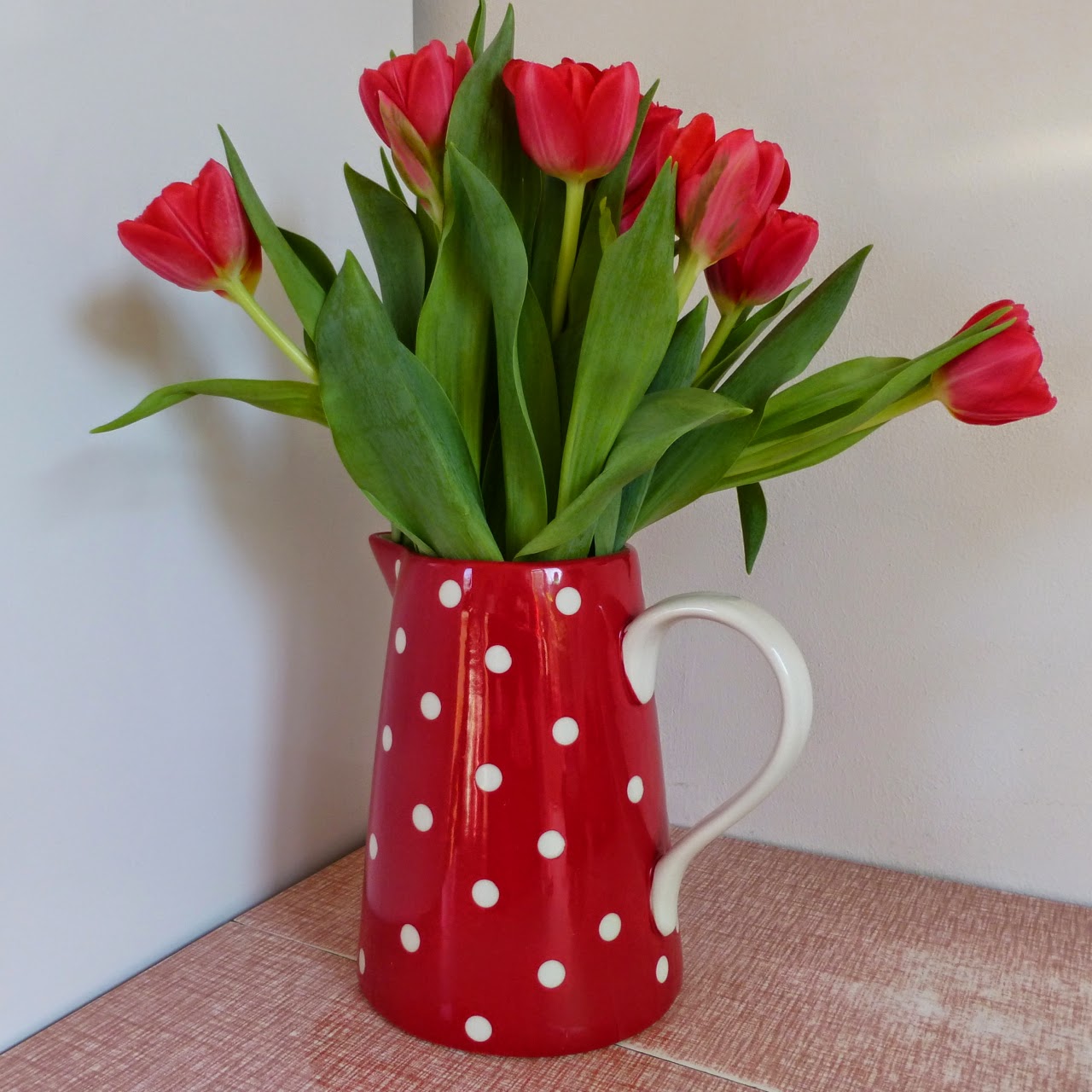 and a beautiful Easter card that came from my French friend Christiane, 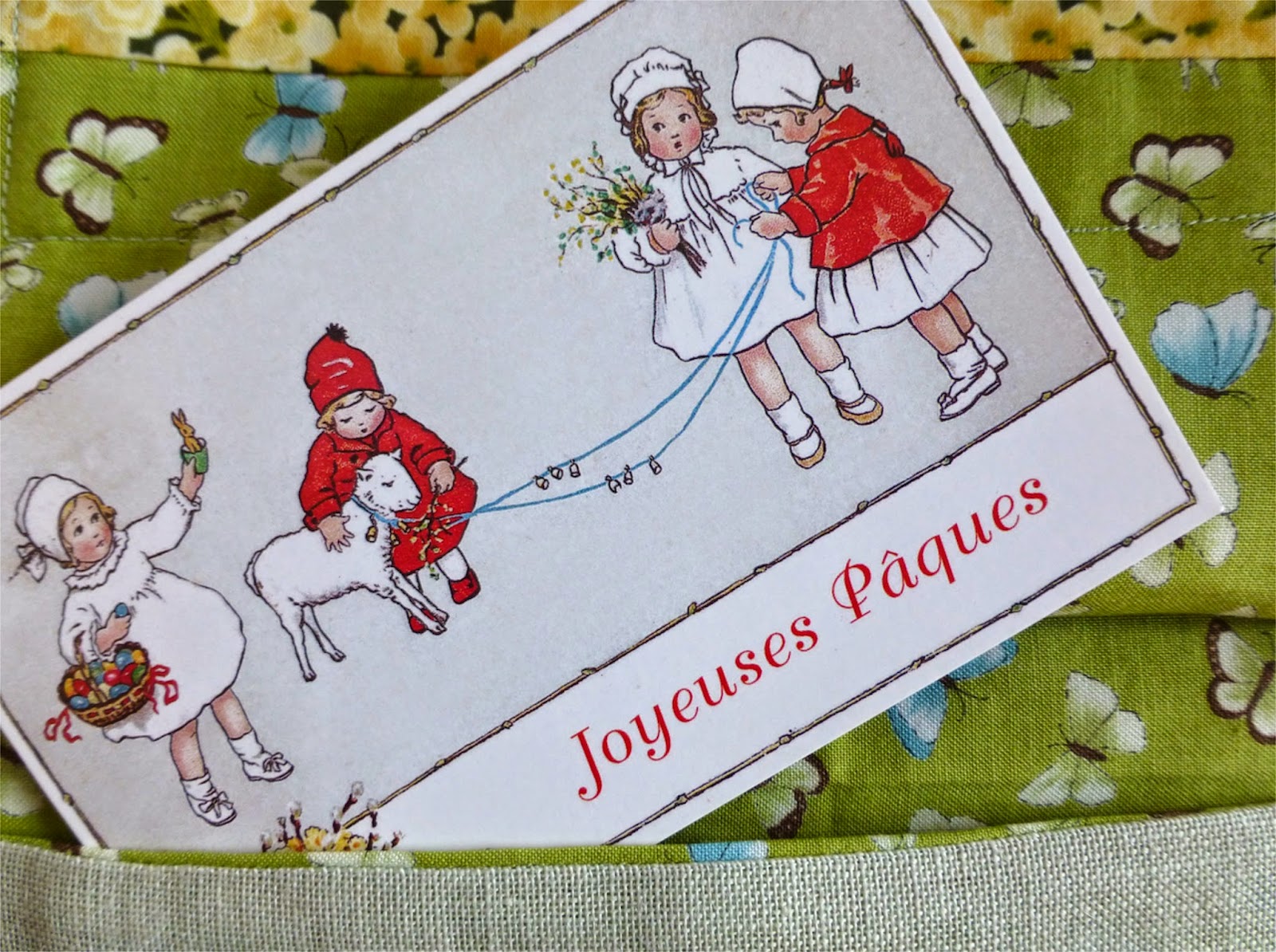 in its own lined, linen envelope, which she'd made and on which she'd embroidered not just the greeting and a couple of darling, Easter rabbits but also my whole address, ... 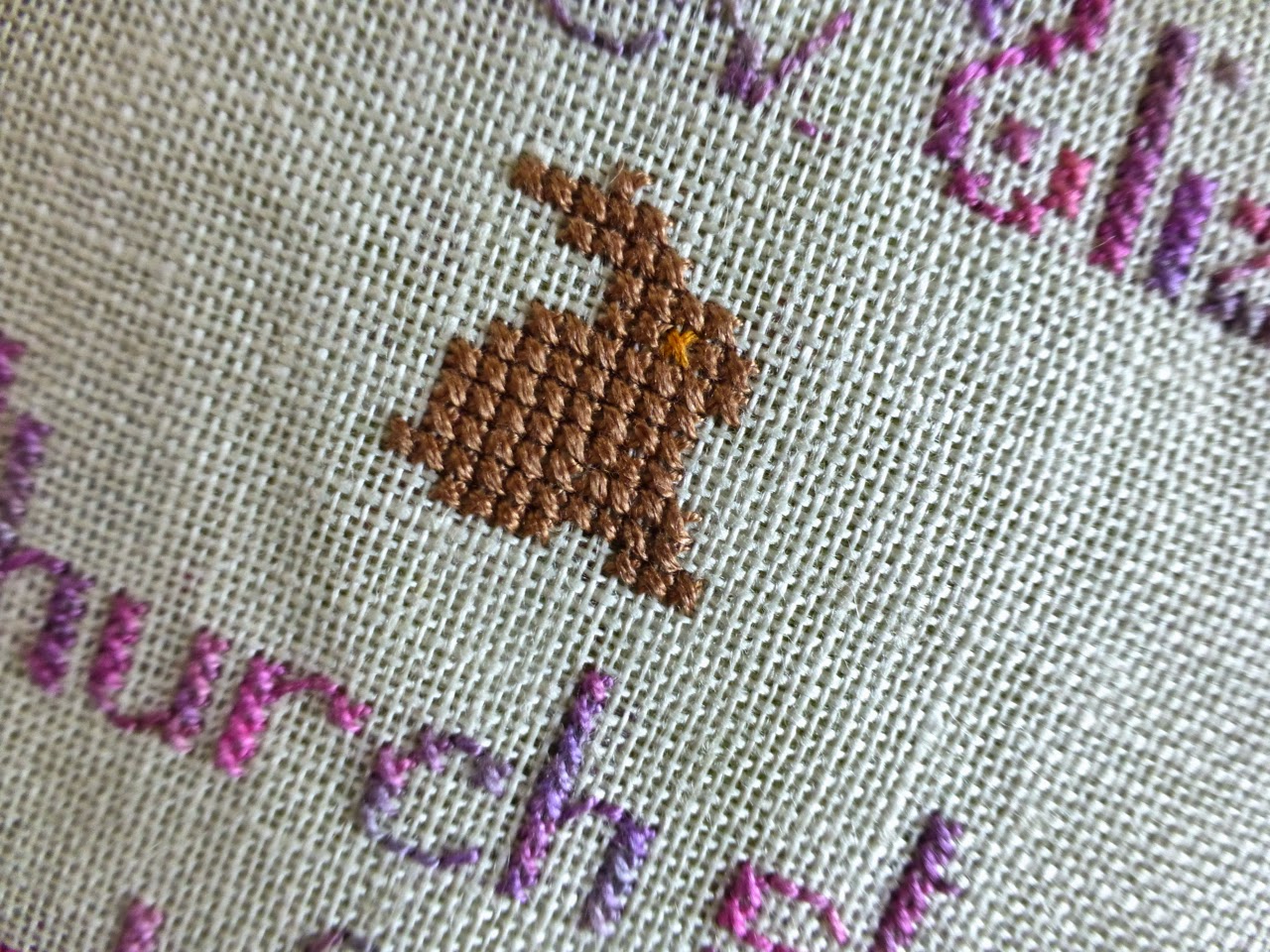 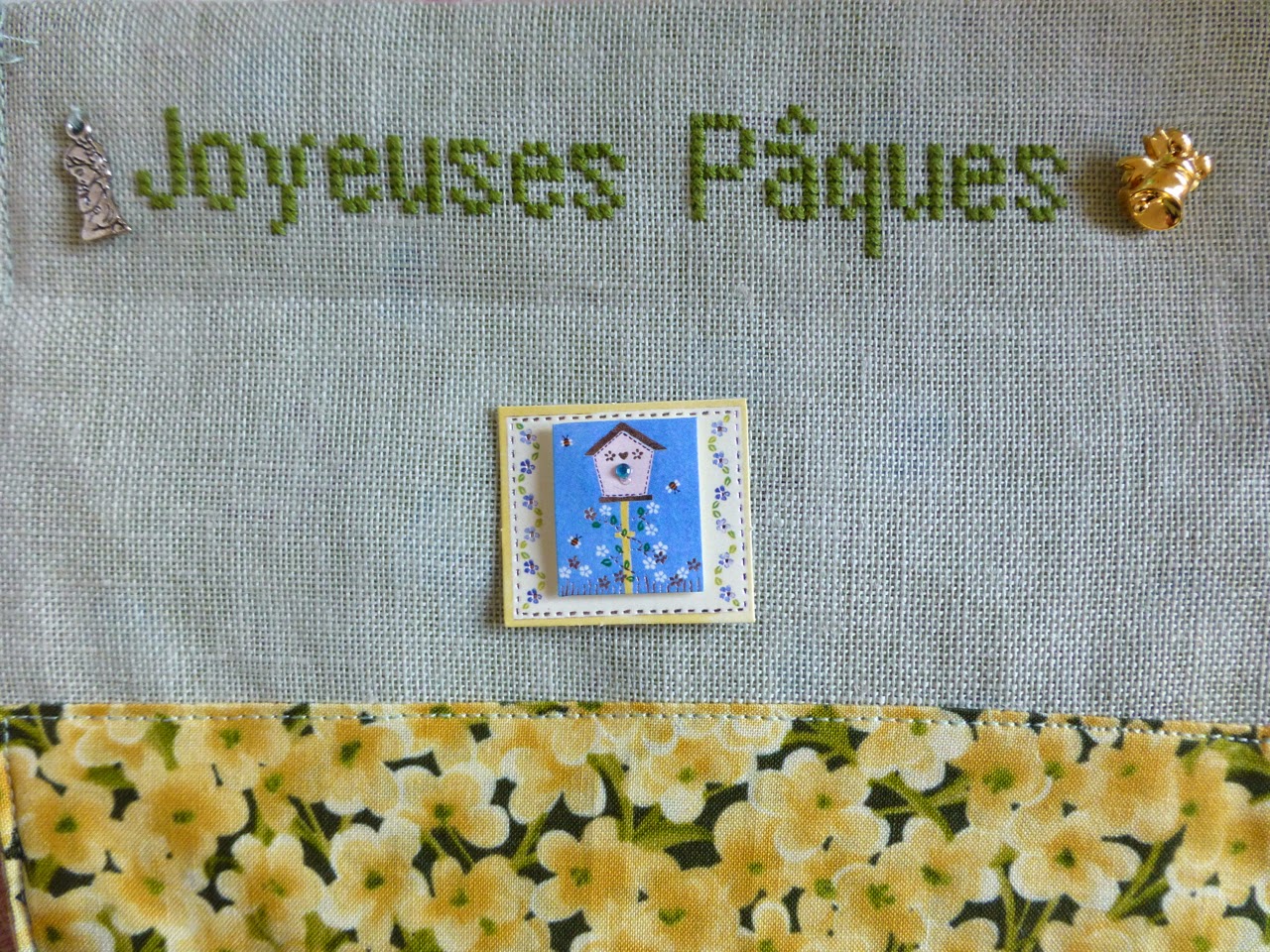 ... and Easter Eve feels as it should. 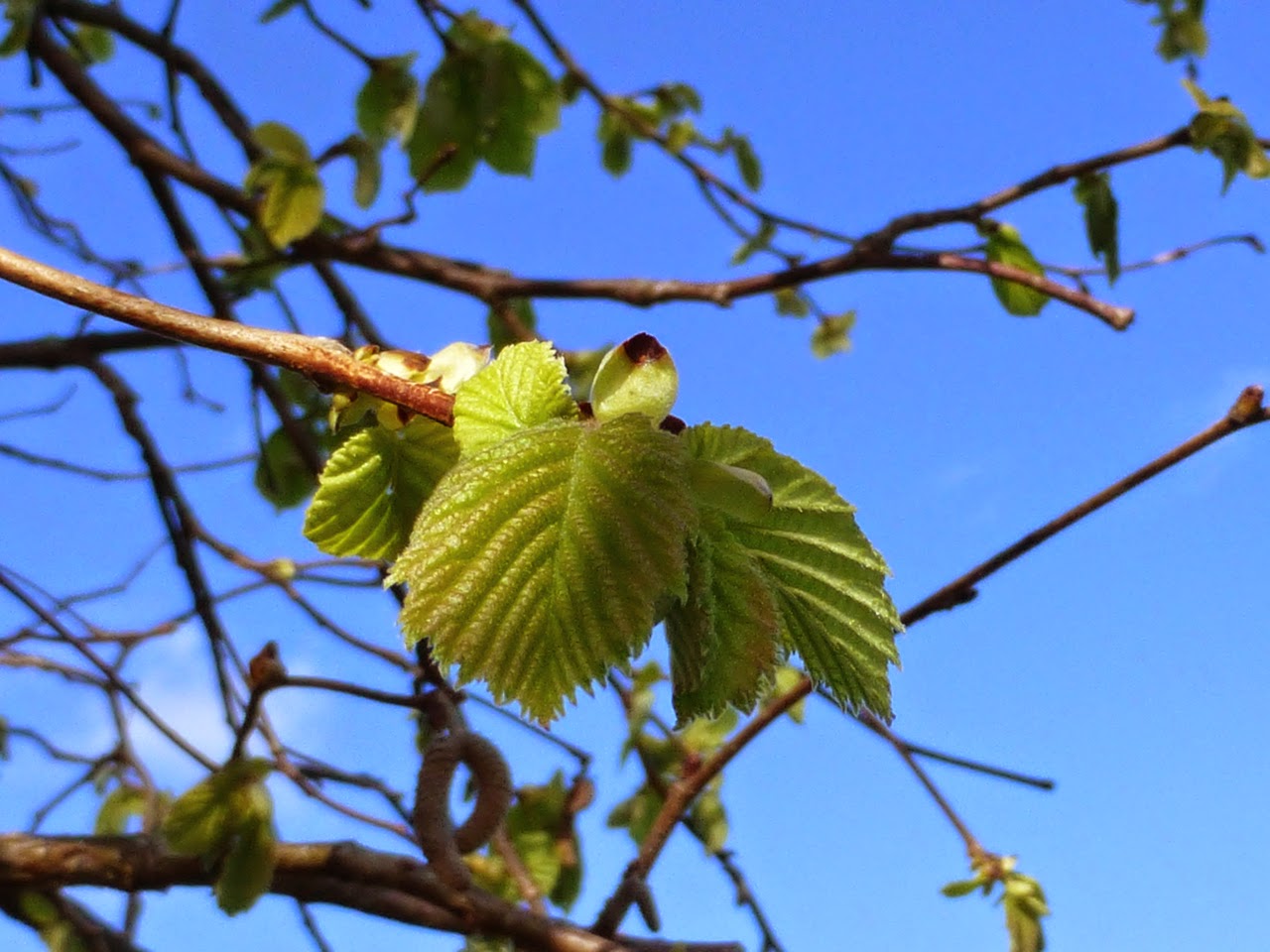 full of the promise of hope, on the cusp of fulfilment. 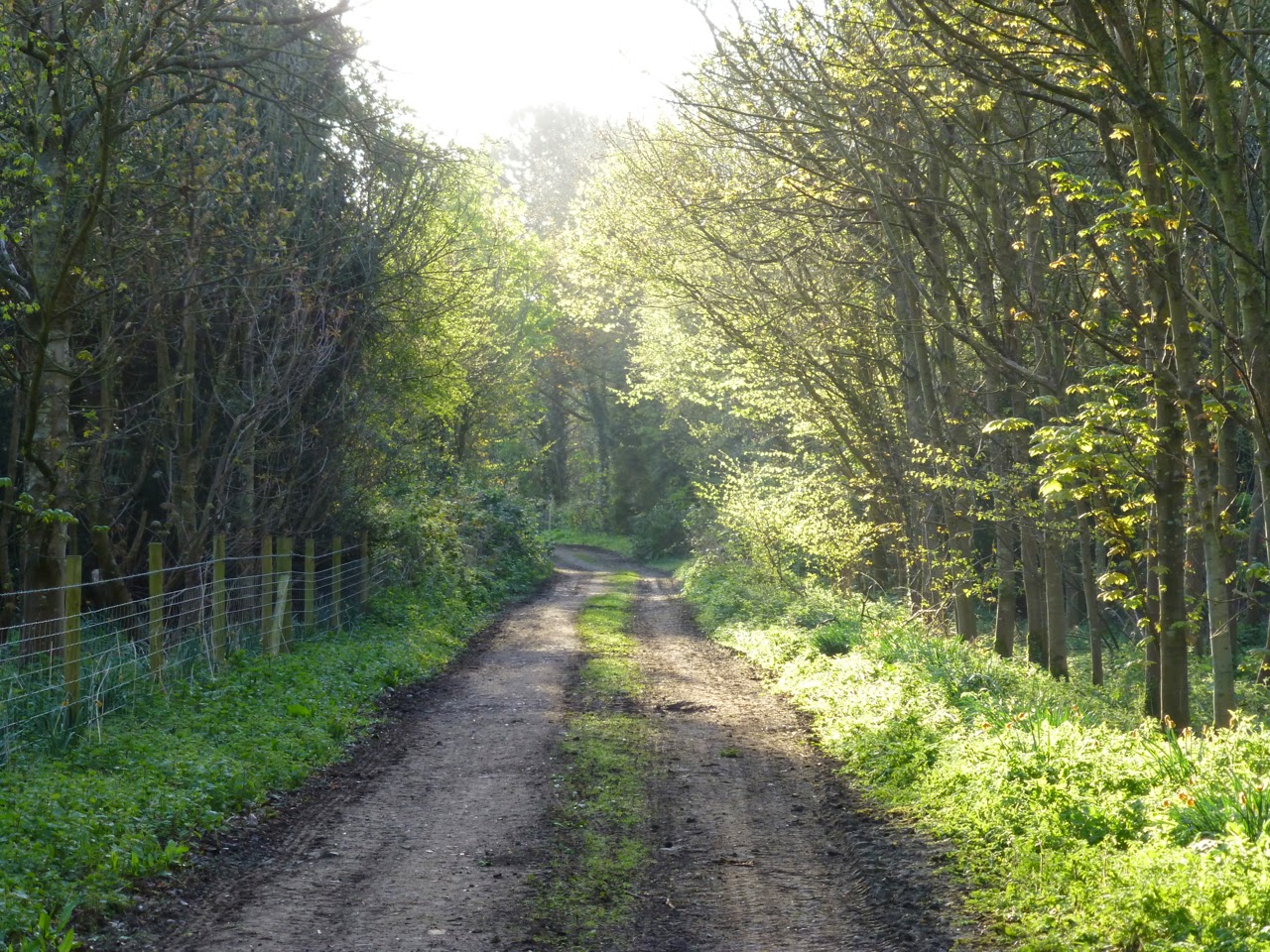 Wishing you and yours every blessing this Eastertide,