This month is turning out to be rather flowery. 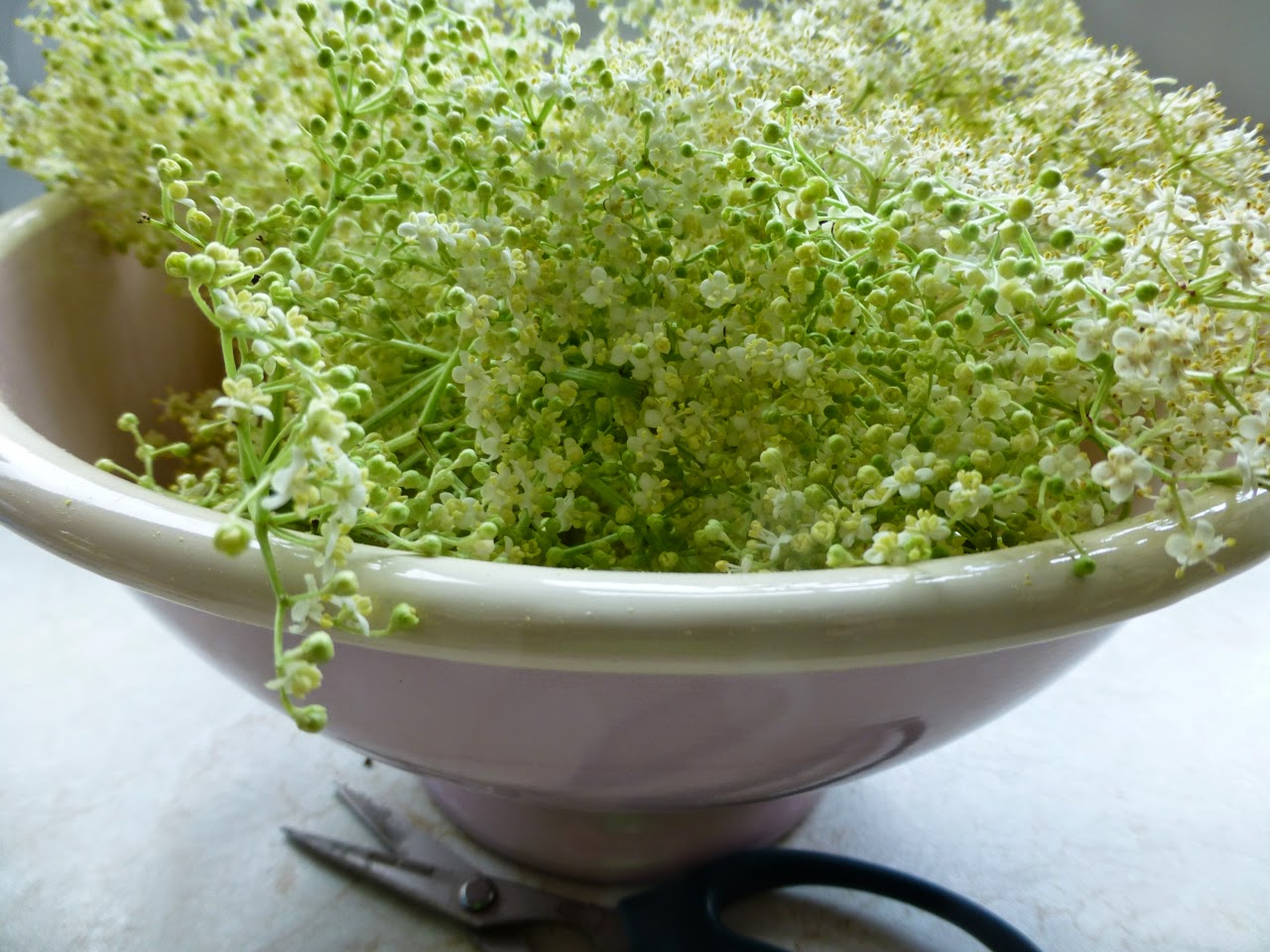 Outside, there are flowers everywhere - including gorgeous, deep pink, wild roses like these in the hedgerows 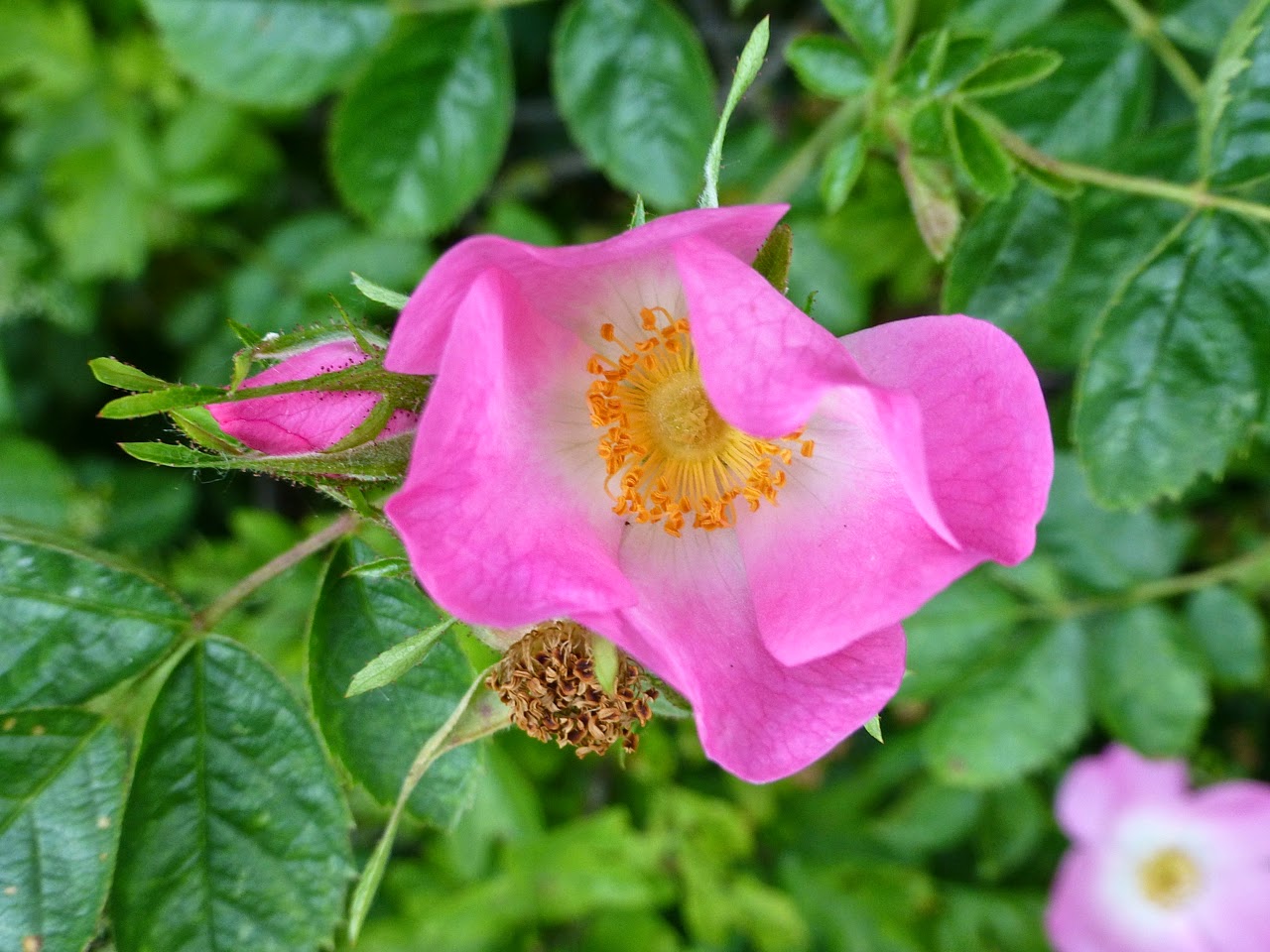 and the more flamboyant stripy ones in the garden, as well as my new delphiniums, that are supposed to be deep blue but have decided to turn out pink in sympathy with the roses. I have no idea why. Inside, I have flowers seething fragrantly and quietly in pots in the kitchen and flowers in my crochet baskets dropping off my hook, like gaudy blossoms after a rainstorm. All good.

The flowers in the kitchen are not roses but small quantities of purple chive flowers, added to wild green soup made from wild garlic, wild thyme, dandelion and jack-by-the-hedge leaves along with a (less wild) bunch of domesticated watercress - very good and packed with vitamins. Well, I don't know about vitamins in the flowers but certainly in the green stuff. Combining wild green leaves with milder cultivated ones works very well - makes the bought stuff go a lot further but you don't get the strong, bitter flavours of wild greens in too great a concentration. Unmuted by tamer leaves, they can be too much of a good thing in my experience. 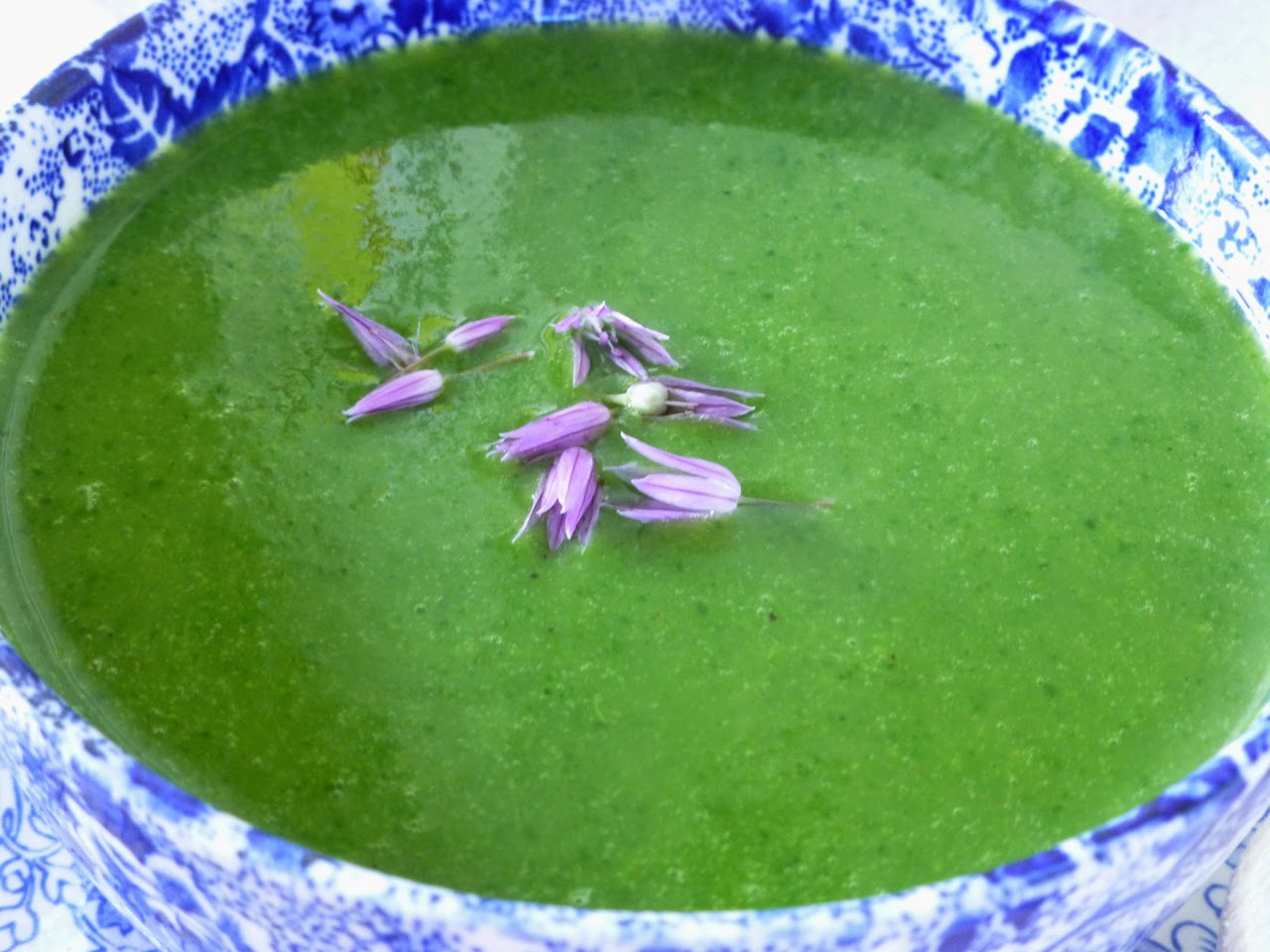 And in rather larger quantity, elderflowers, which seem to be particularly profuse round here, this year and which I've been turning into elderflower cordial. 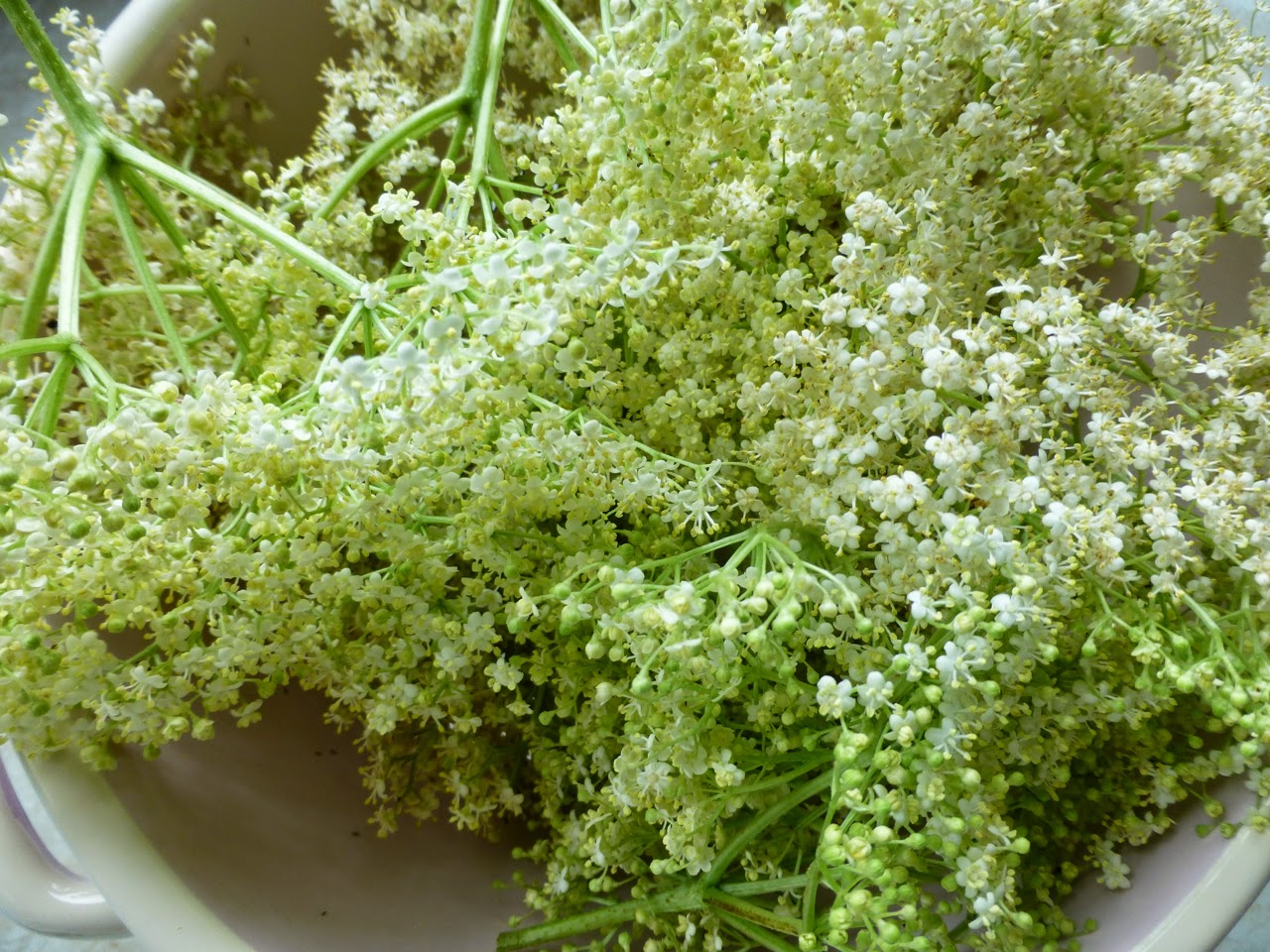 There are lots of recipes out there for this. All basic variations on the theme of steeped flowers, citrus rind and / or juice and a heavy sugar syrup. Some have citric or tartaric acid added to them to improve their keeping qualities. Some stick to the pure elegance of just lemons to partner the heavy, creamy elderflower perfume, others flirt with oranges as well, or limes. You can vary the type of sugar and the proportions but at the end of the day, whatever recipe you use will be delightful and with this kind of frugal, foraged food it's always better to use what you have, rather than slavishly go out of your way to replicate what you haven't, I think. So if you have oranges or limes in your fruit bowl but no lemons, use oranges or limes and if you run out of white sugar, use brown.

I've adapted a couple of recipes over the years and this amalgamated version of my own is what I usually come back to. Like to try it? Here it is. It's beautifully simple and tastes divine. Sweet and fragrant but also refreshing and light. Despite my sweet tooth, I don't like it, if it's overly sweet and cloying.

To make just over one and a half pints of finished cordial, you need:

fresh elderflowers - about eighteen flower heads on their stalks. You don't need to strip off all the little florets - the cordial is going to be strained through muslin so don't worry about the little stalks within the flower heads. Choose fresh-looking blossoms - some will be more open than others. Doesn't matter. Avoid any with predominately browning patches but the odd, rogue, browning floret won't matter nor will flower heads where some of the florets are still in bud.

As you snip and pick the flowers, gently shake them, before putting in your basket or colander, to dislodge tiny insects or any of those pale, jade-coloured spiders that like to make their camouflaged home among the elder's greeny-white parasols.

You're not going to wash the flowers - you'll lose half the scent like that - so it makes sense to pick the flowers away from a heavily-trafficked roadside. You are after the taste of a fragrant, English hedgerow here, not car exhaust fumes. Elder trees grow readily in the English countryside, in parks and on wasteland so you shouldn't find it too hard to locate a suitable tree, if you live in the UK.

one and a half pounds (650 g) of sugar - ordinary, white, granulated sugar is my first choice but my second batch this month I made with demerara sugar because I'd run out of white and although the colour is less elegantly pale, the flavour is very good and has an attractive, slightly deeper, note to it.

Place the flower heads, just as they are, in a large heat-proof bowl.

Get a potato peeler and peel off the lemon zest from both lemons in wide ribbons. Add to the flowers.

Squeeze the juice from the lemons and add to the bowl.

Put the sugar and water in a separate pan and bring to the boil, stirring to dissolve the sugar. Once the sugar is fully dissolved and the syrup boiling, remove from the heat and pour over the flowers. Stir gently. 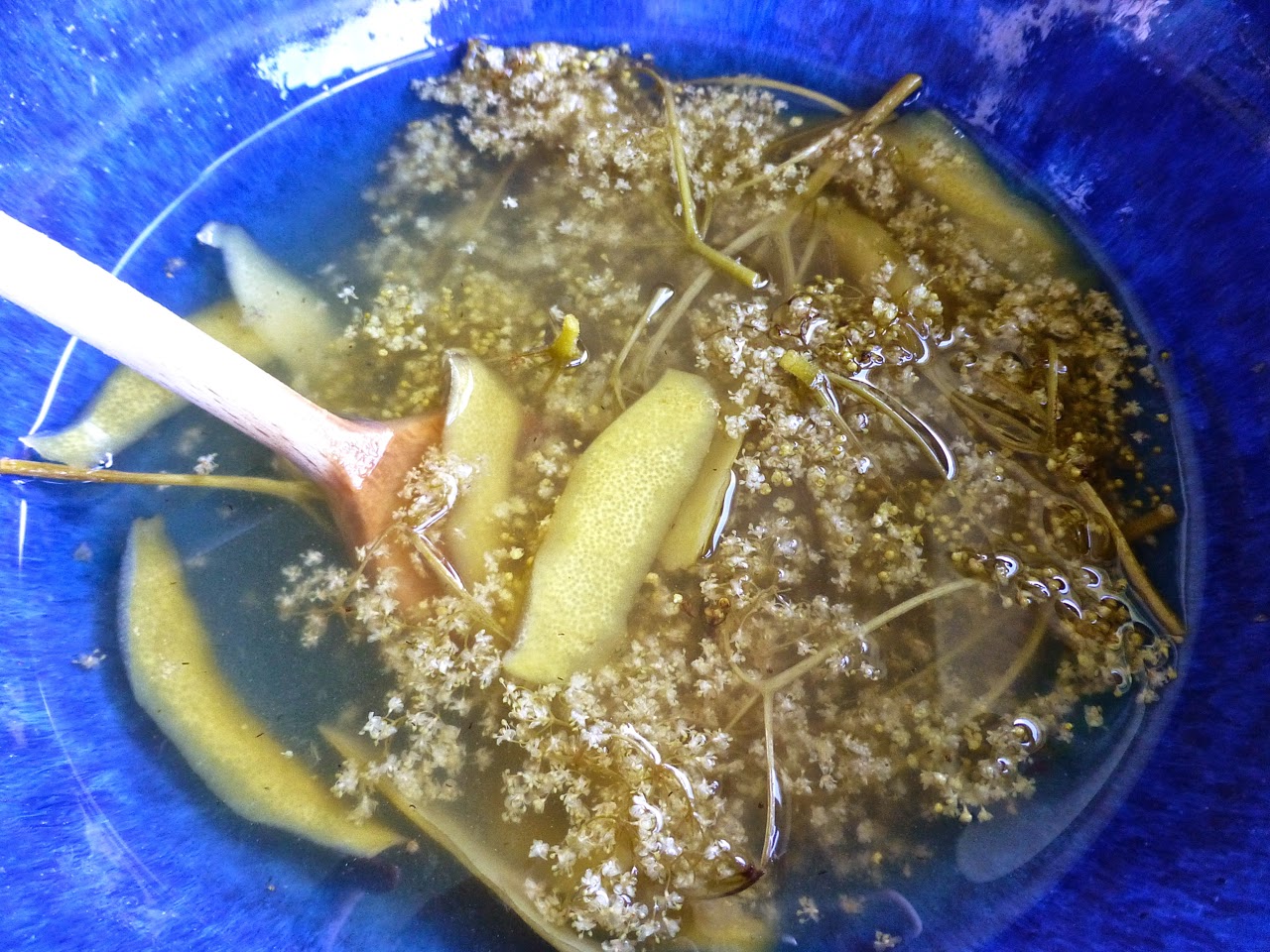 Cover the bowl with a clean tea-towel and leave for twenty four hours or so.

The next day, line a sieve with a double layer of very clean muslin (or a new J-cloth) and place it over a large jug. Tip the perfumed, syrupy mixture into the lined sieve and allow it to drip through. Don't press the flower debris, just let it drip. It won't take long. 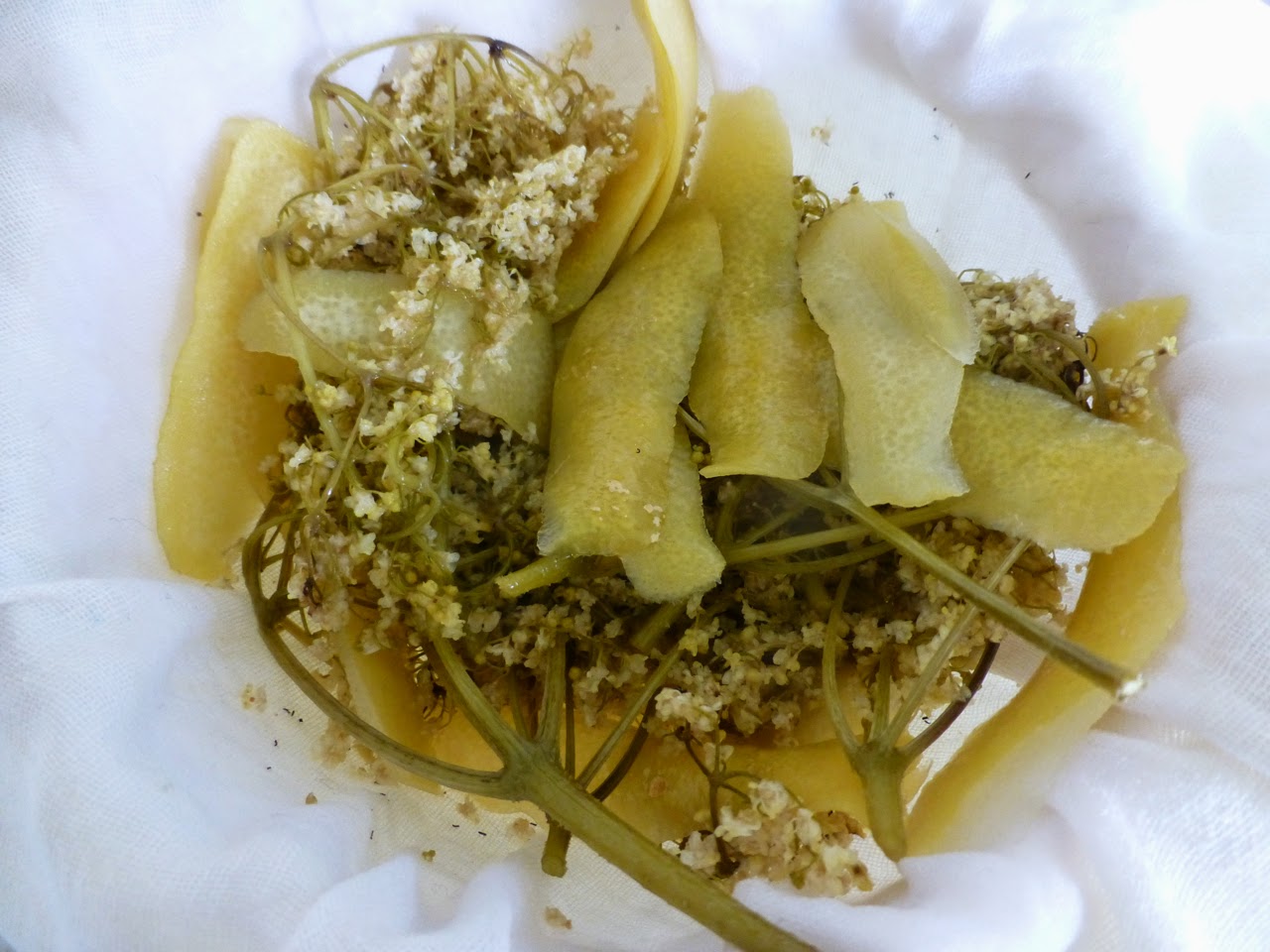 Pour the cordial (which is what it now is) into clean, sterilised bottles or plastic containers. Design a pretty label, if you wish. 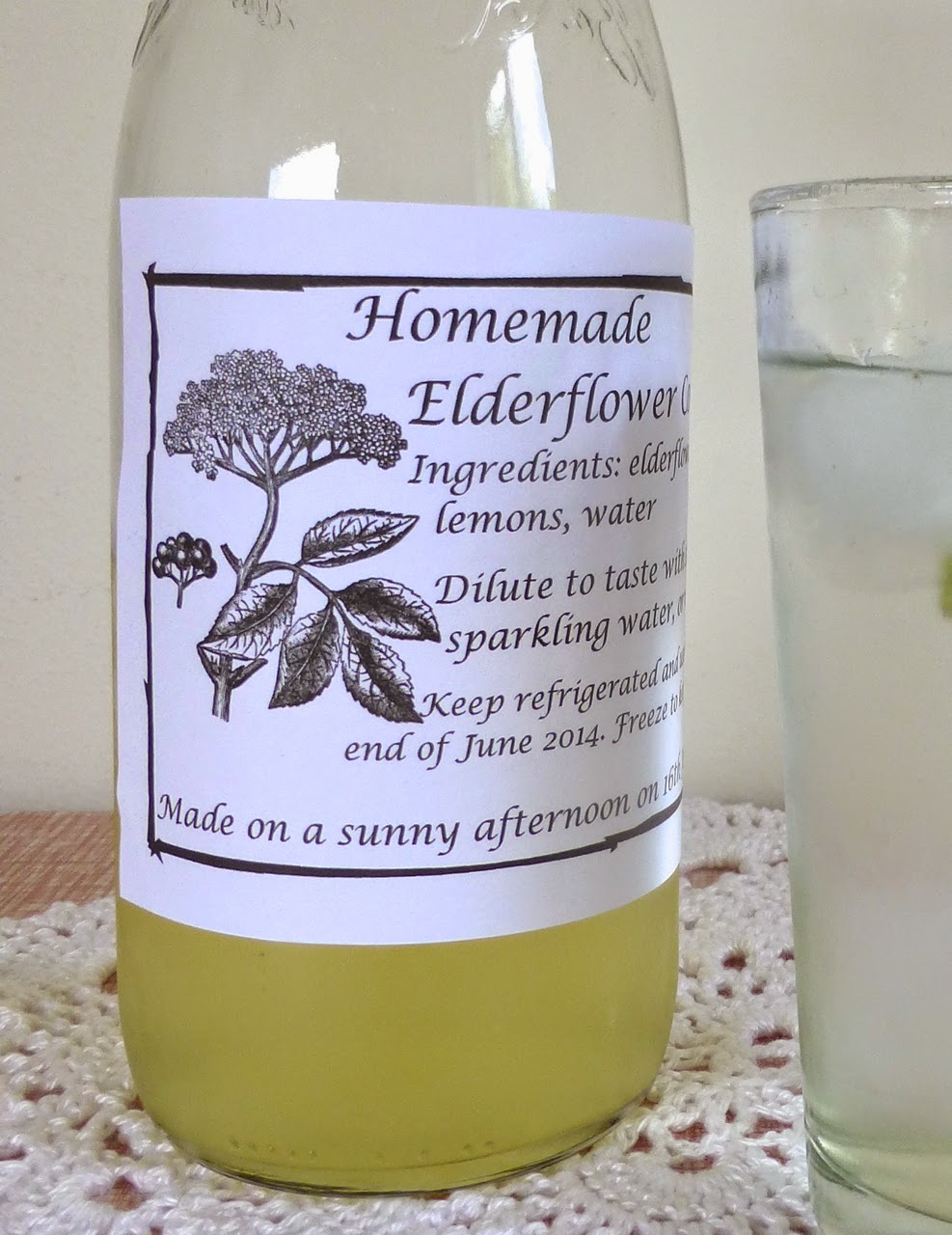 It will keep, just as it is, for a week or two in the fridge. If you want to keep it longer than that, it''s best to freeze it or you can add an ounce (25 g) of citric acid to the mixture but the flavour is purer without it. I usually freeze what I don't need immediately in quantities of about three quarters of a pint (350 ml) in scrupulously clean, plastic tubs, the kind you sometimes get honey in. Label it though - it can look very much like chicken stock once it's frozen into an anonymous, frosty tub and your soup will not thank you for an unexpected splurge of flowered sweetness not to mention the affront you risk inflicting on your beautiful cordial of being unceremoniously tipped into a maelstrom of hot, sweating onions and olive oil!

Back to the (unfrozen) cordial you are going to use now. Sample it in a long glass, diluted with plenty of chilled, sparkling water, ice and perhaps a slice of fruit floating in it, if you so fancy. I like it with a couple of leaves of fresh mint myself. 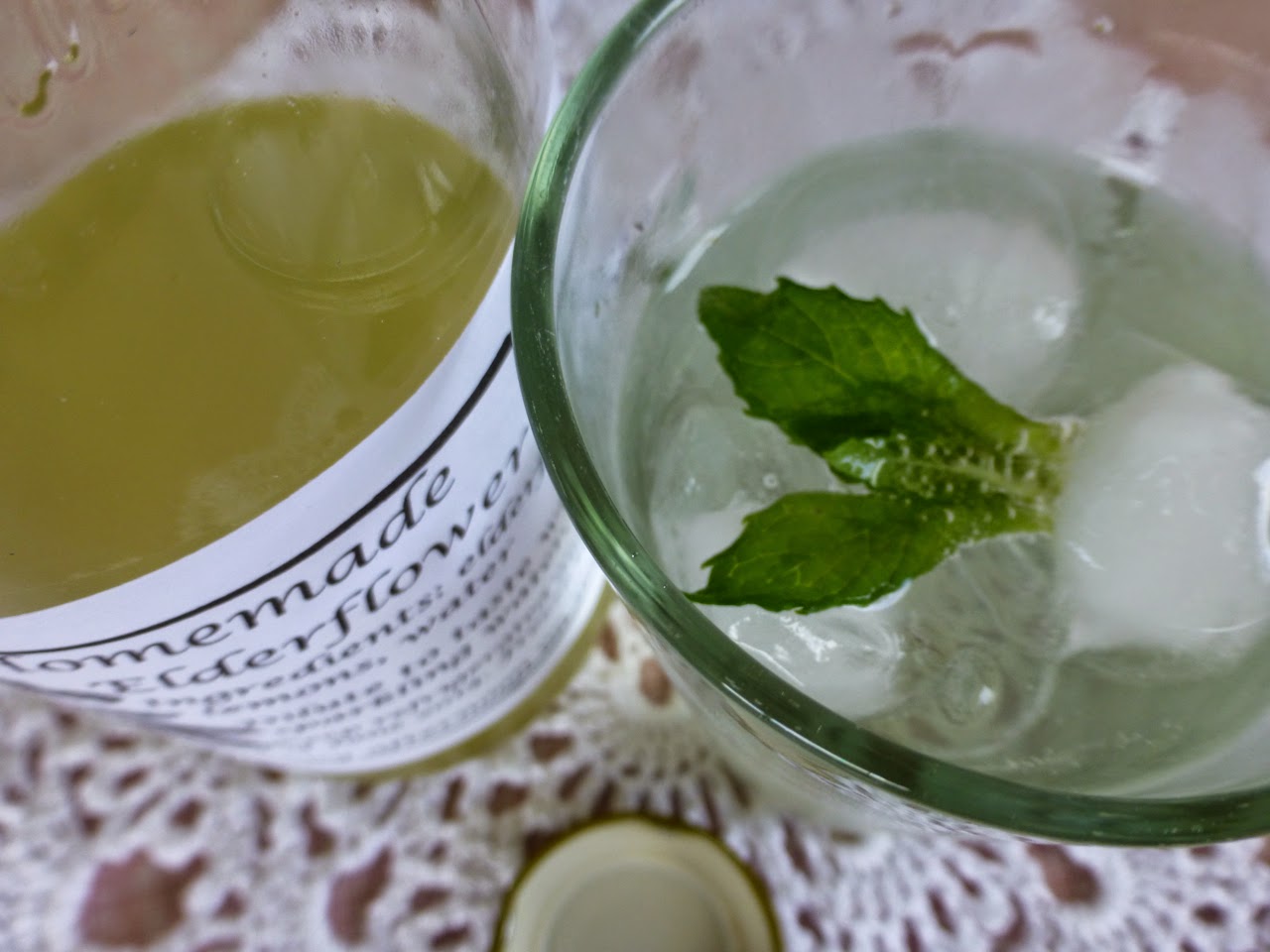 Dilute the cordial to taste - I don't like it too strong and find one tablespoonful is enough in a half pint glass of water but this is purely personal taste. Works well diluted with still, or sparkling, white wine too, should you feel so inclined. 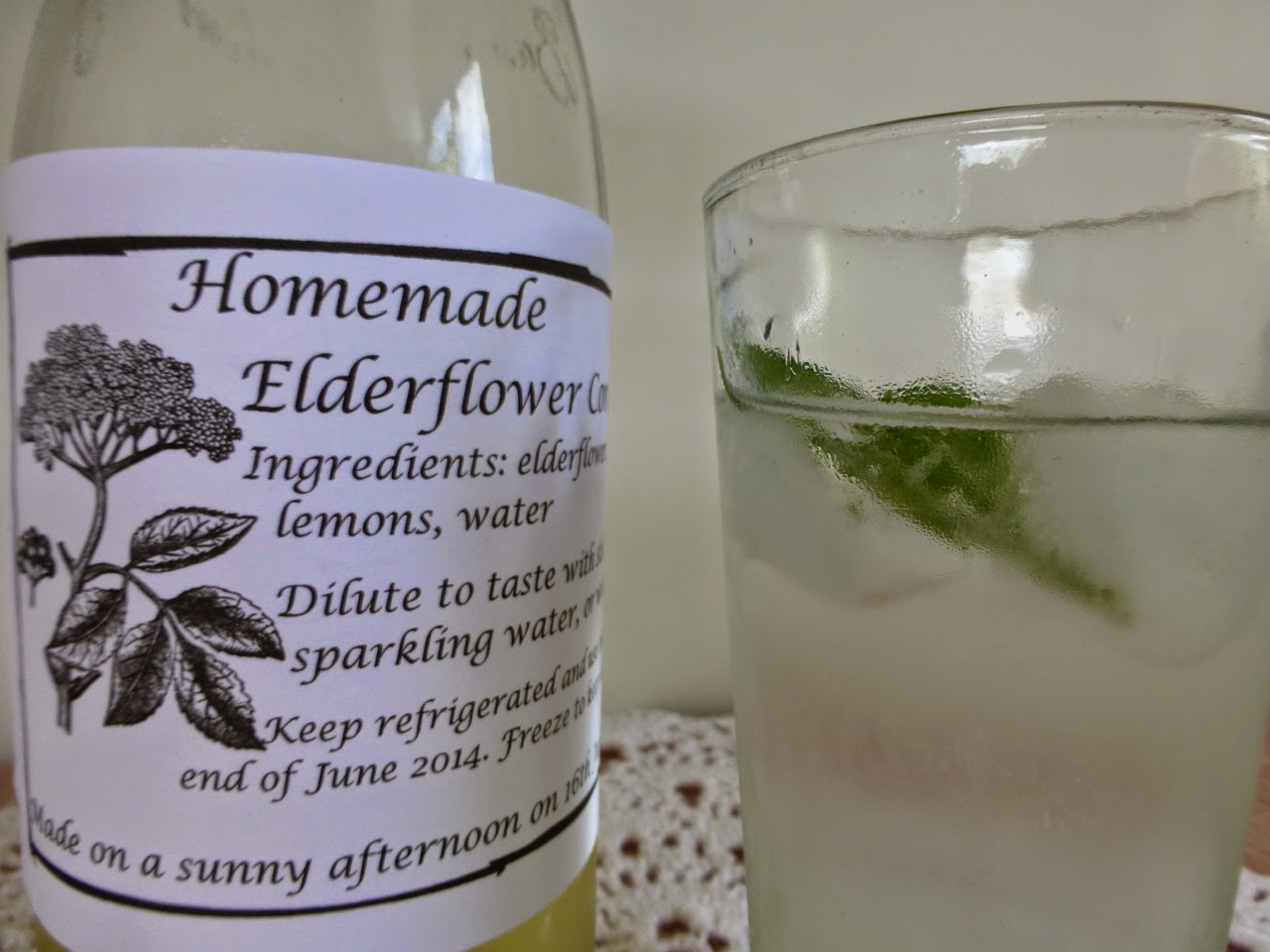 If the elderflowers are pale and interesting and have a certain aristocratic elegance about them, my hooky flowers are blowsy by comparison. A riot of shapes and colours jostling one another in a slightly uncouth way in a big basket. 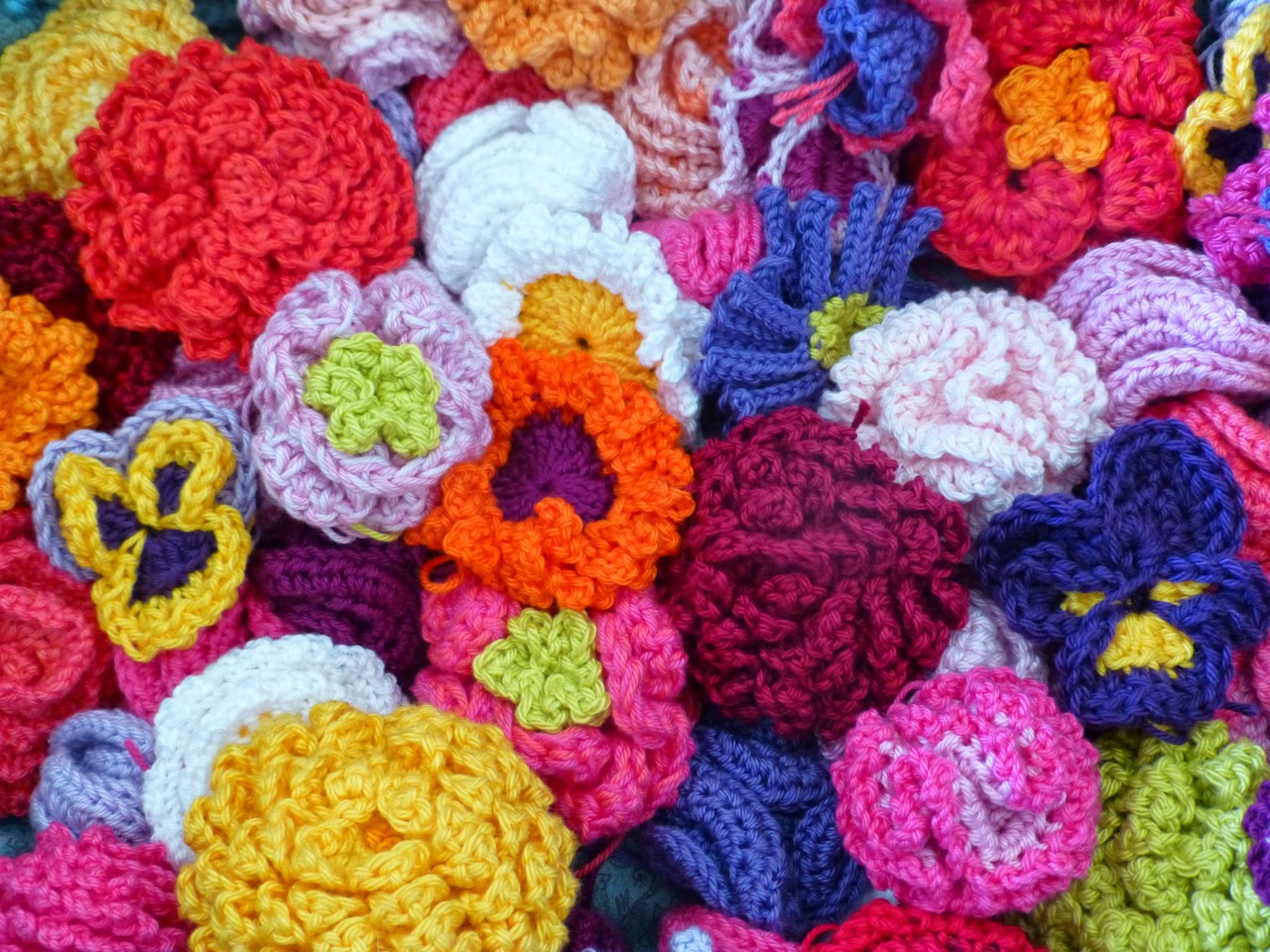 They have come about because I don't know how to say "no". And I never seem to learn. Anyone else have this problem? A few months back I was asked if I would supply a flower arrangement for a village flower festival celebrating "Village Life in Flowers". It was January - bleak, wet and cold and the idea of footling about with fresh, summery flowers sounded pretty good so I said, "yes".

A little inner voice in my head reminded me that the appointed weekend at the end of June was already very busy with work and I wouldn't have a great deal of time running up to it, to do a lot extra. "You will get stressed about this, Mrs T." it said loftily. But I took no notice. What did my inner voice know about it? Quite a lot as it turned out! As the flower extravaganza moved from being safely in the long grass of months away, to something pressingly close in the diary, I wondered what particular form of idiocy had induced me to sign up for this. Mrs T is not a flower-arranger but a stick-a-bunch-in-a-jam-jar-kind-of-girl. "Stick-a-bunch-in-a-jam-jar won't be acceptable for this." said the smug, inner voice in my head, adding sotto voce, "I told you this was a bad idea at the time but you wouldn't listen!" OK, inner voice, touché! But what now?

After a bit of stressful to-ing and fro-ing with ideas, "What now" turned out to be what you may feel is "cheating"; I prefer "creative solution" myself! It has the advantage of being actually manageable instead of beyond my powers and unlike any fresh flower arranging, lends itself to advance preparation, namely a hazel wreath (a bigger version of my Easter one) festooned with crocheted, English, cottage-garden flowers - roses, sweet peas, marigolds, chrysanthemums, pinks, pansies, clematis, fuchsias, michaelmas daisies and a few peonies. 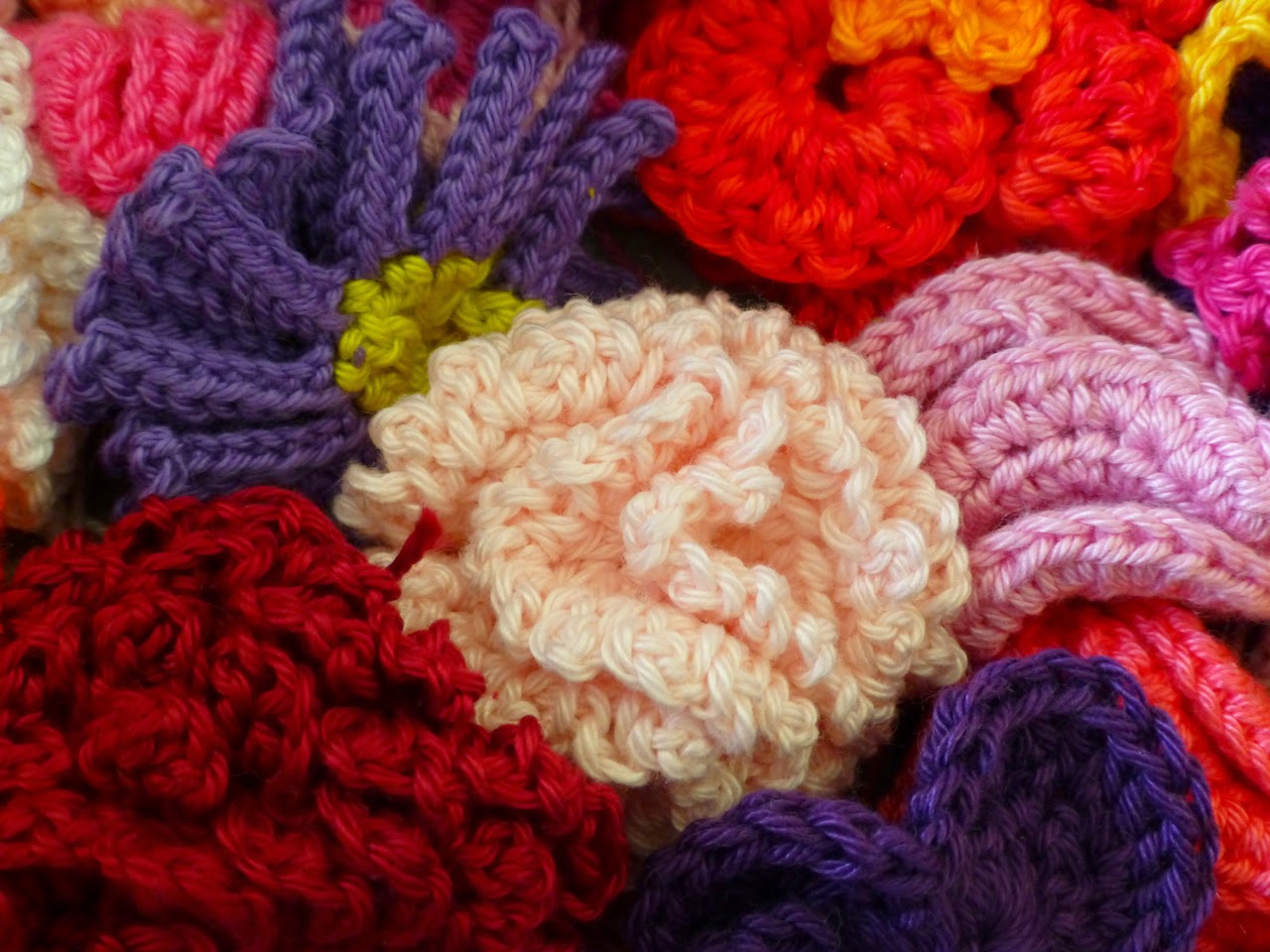 A lot of work has gone into these - there are fifty two blooms in total but it's been spread over a period of weeks and I have the peace of mind of knowing that there will not be a last-minute panic of tears, broken stems, wilting petals and wayward secateurs in the small hours, in a fortnight's time. 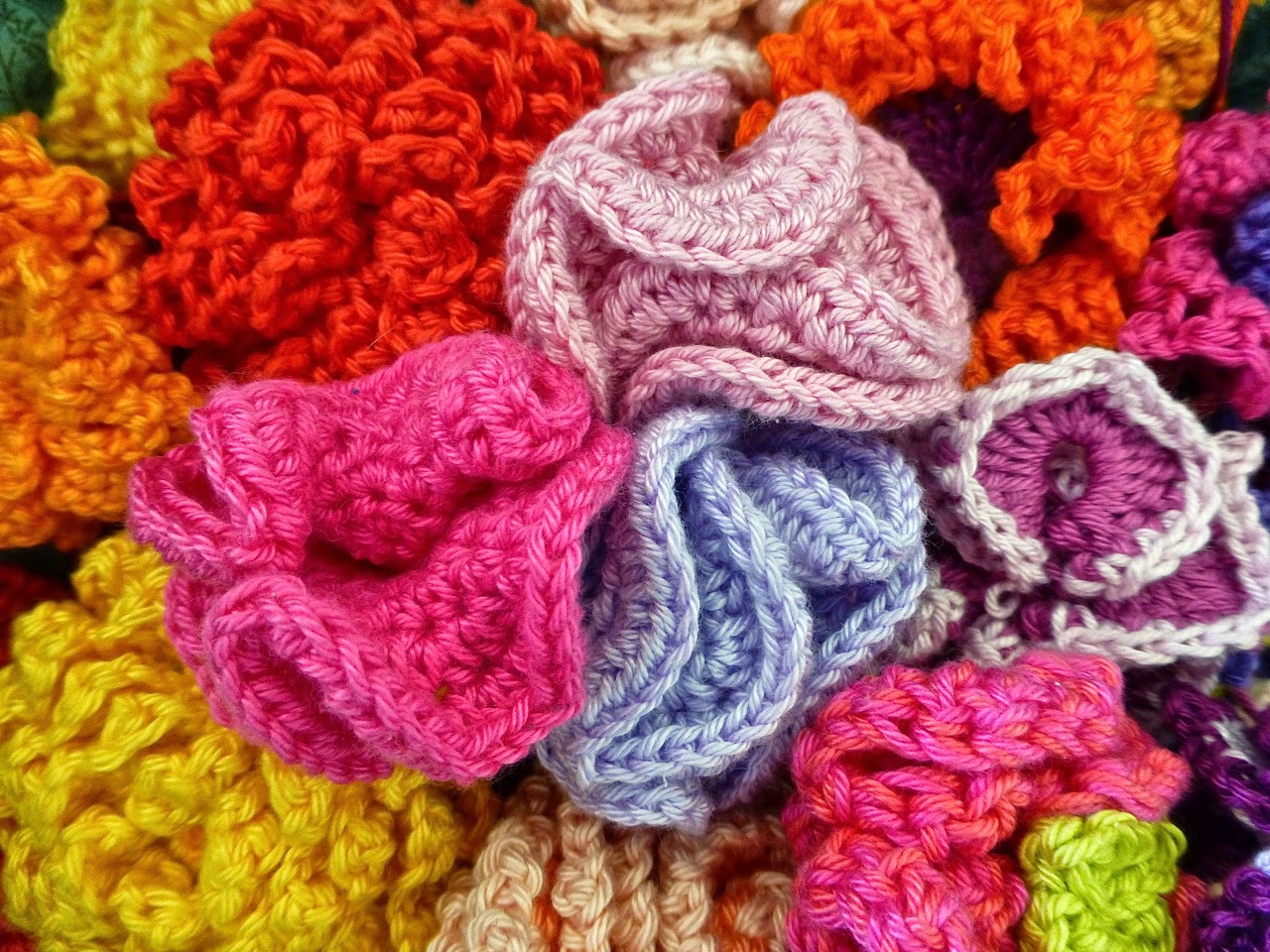 Sometimes lateral thought is just what's needed. And just in case anyone jibs at them being artificial I shall stick a bunch of real ones in a jam jar to sit at the base of the wreath which is going to sit in within the stone embrasure of a Medieval church window. All good!

The wreath is cut from the whippy stems of a hazel bush in the garden and is currently tied in shape with purple string and drying out in the sun in the apple tree. 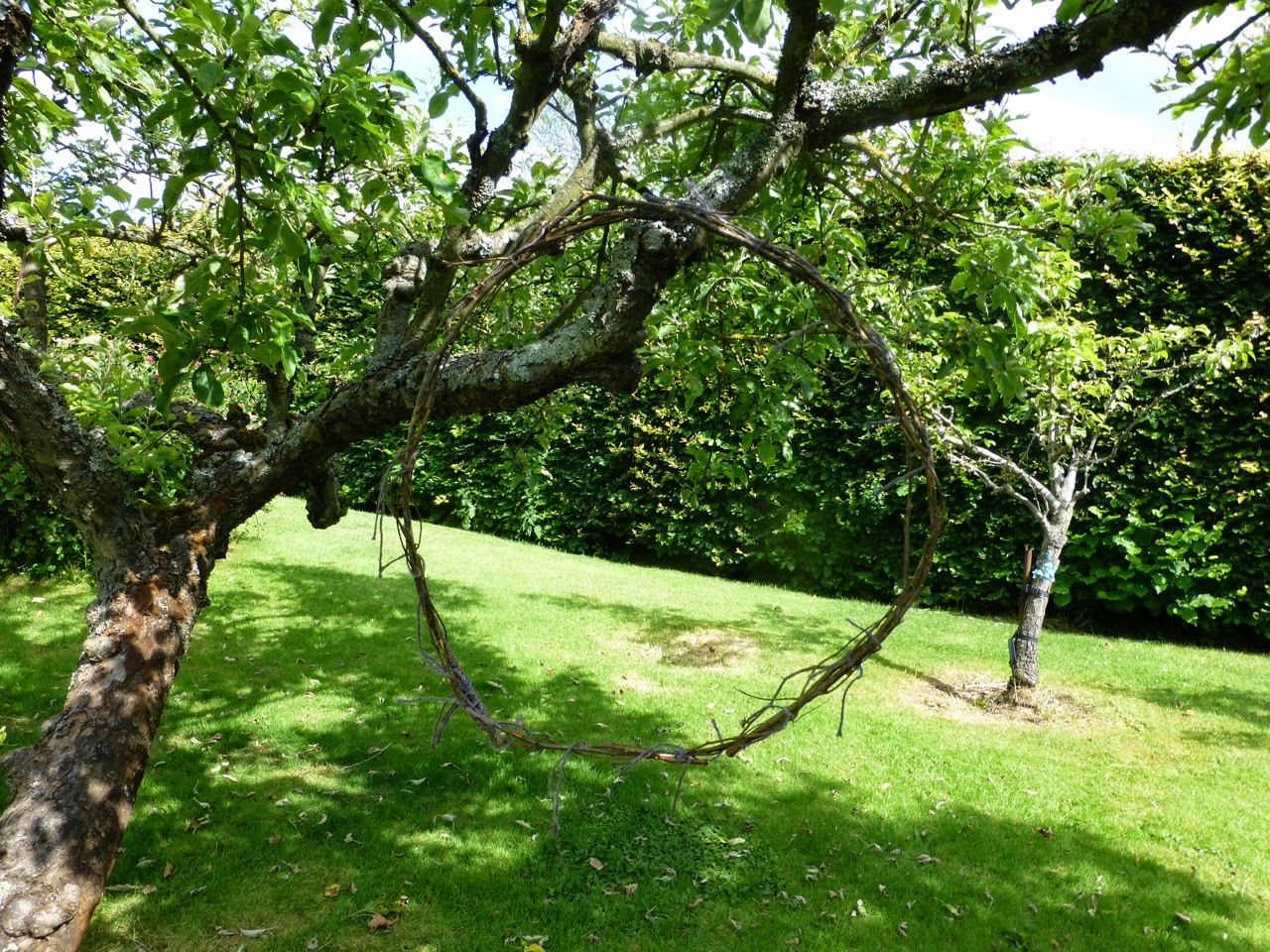 It's rather large - about three feet across. I hope I have enough flowers to cover it properly. They may have to be eked out with fresh bay leaves. I'll let you know when I assemble the thing! 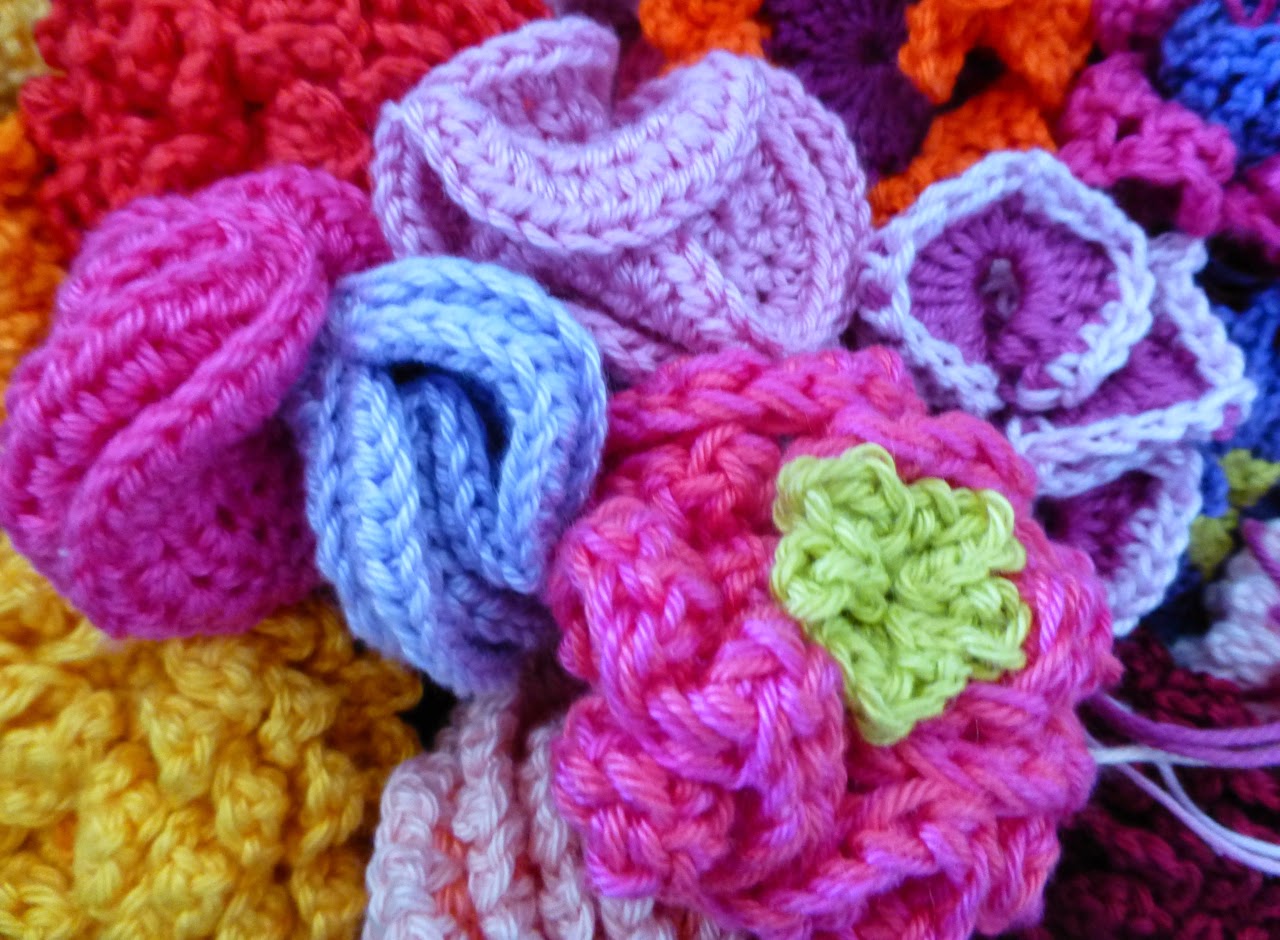 I have some other flowery plans too - in the kitchen and out of it.
Happy Flowery Days! Keep 'em coming!


Posted by Thomasina Tittlemouse at 11:32