"Life Is Too Short To Stuff A Mushroom"

Shirley Conran's famous maxim is not a bad one to live life by - don't sweat the small stuff; don't get bogged down in frippery detail; don't waste time on what is inessential. All pretty sound. But there's also the view point that life is too short not to stuff a mushroom. If a stuffed mushroom makes your heart sing and you enjoy the process, that is. This post is not remotely about stuffing mushrooms, in a literal sense, but it is about making something that is the hooky equivalent of a stuffed mushroom. So a health warning first up: this is about making something frivolous and let's face it, fairly useless; something nicely decorative but also something that might well qualify as a dust-trap; it is inessential and frippery; the world will not be a better place if you make one of these! So if you feel this post is heading in a direction not for you, waste no more time and click away! If, however, you have sneaking mushroom-stuffing tendencies, you might just find that this idea delights you. And experiencing delight in the world is a Good Thing, I believe. So, if that is you, read on....

I don't know why I got the idea in my head, but after Christmas I kept thinking about making a crochet gingerbread house. I've made simple houses in real-time, baked gingerbread to give away at Christmastime sometimes and I thought to myself, why not in crochet? I had a little search to see if there were any patterns around and indeed there are some, but not free ones, and I thought to myself, "Well how hard can it be to crochet up panels, without a pattern?", so I did, and this is what resulted: 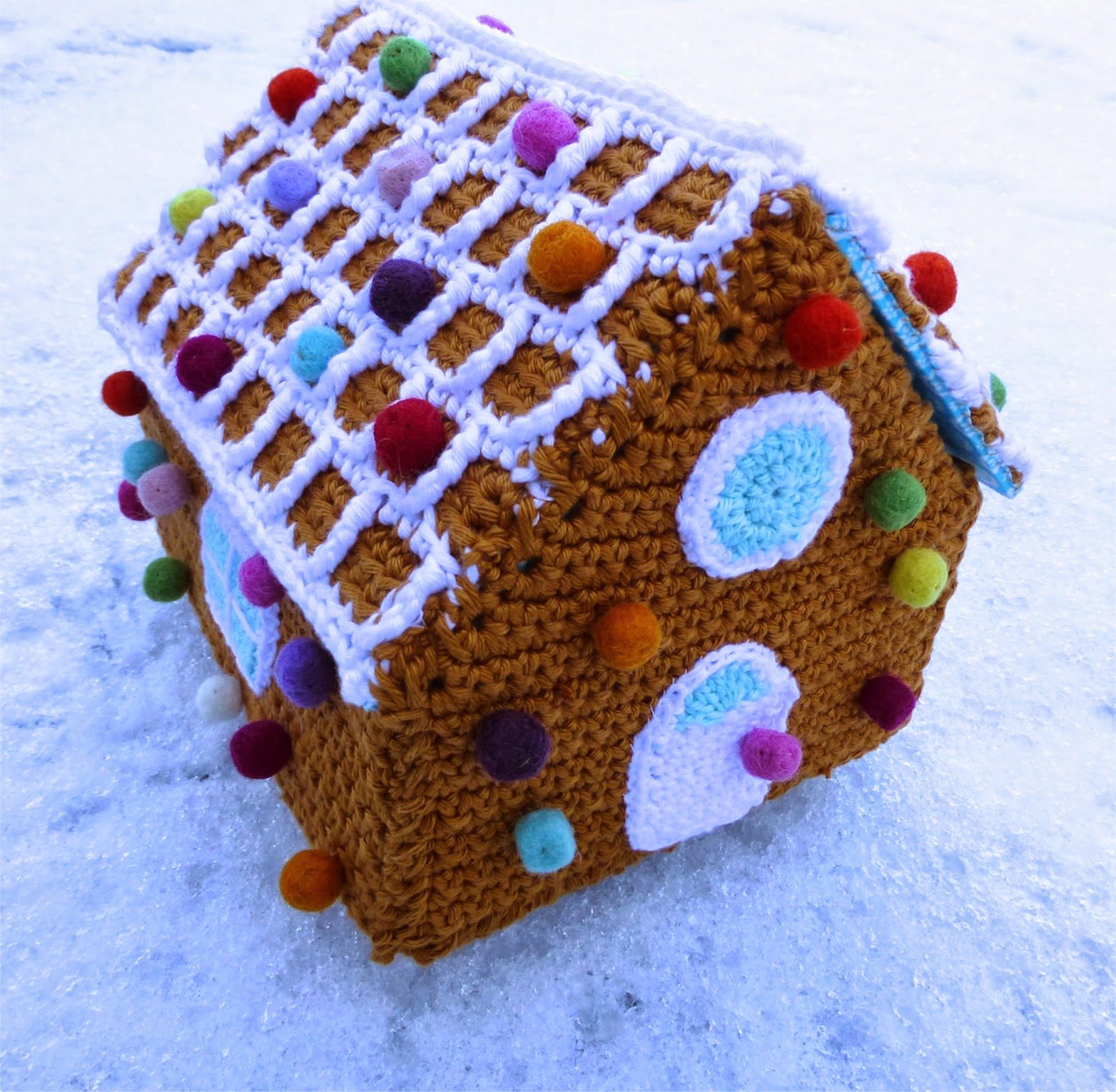 I love it! (Especially sitting in the snow!) 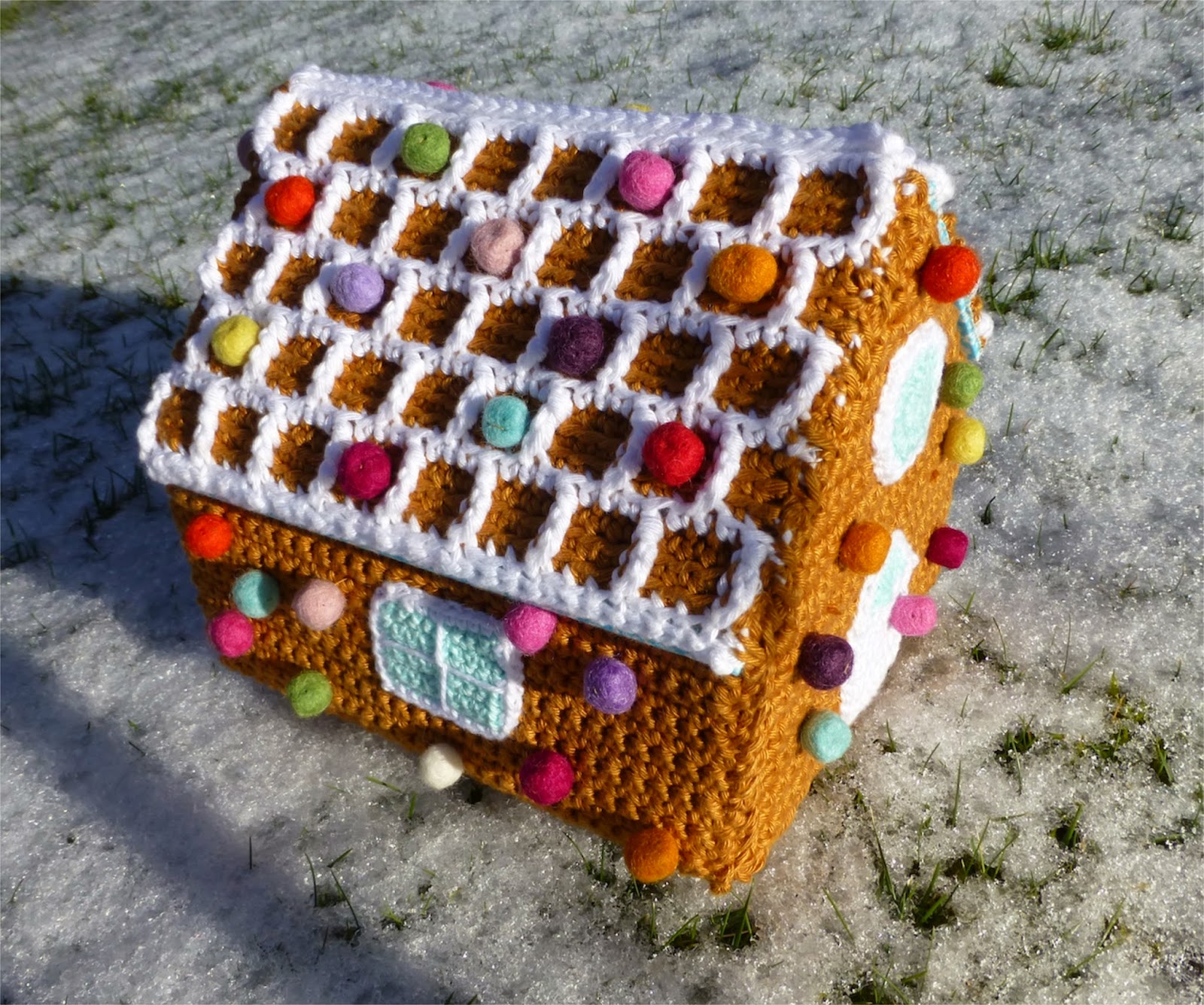 It's made up of panels of crochet stitched onto inner plastic panels, lined with fabric and stitched together. 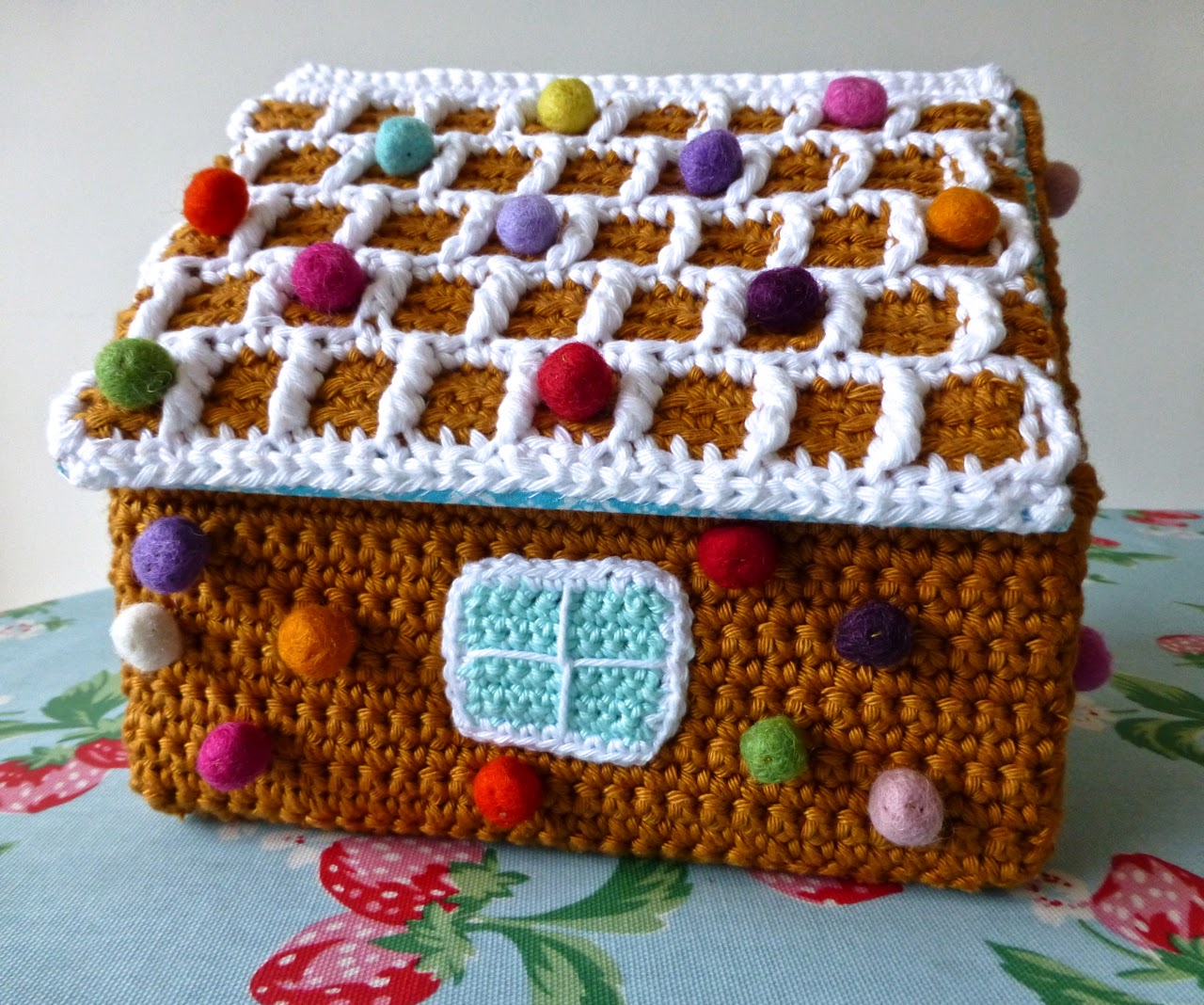 I made it in stages. A bit here and a bit there. A pick-up-and-put-down project for odd winter moments when I wanted a break from blanket-hooking. 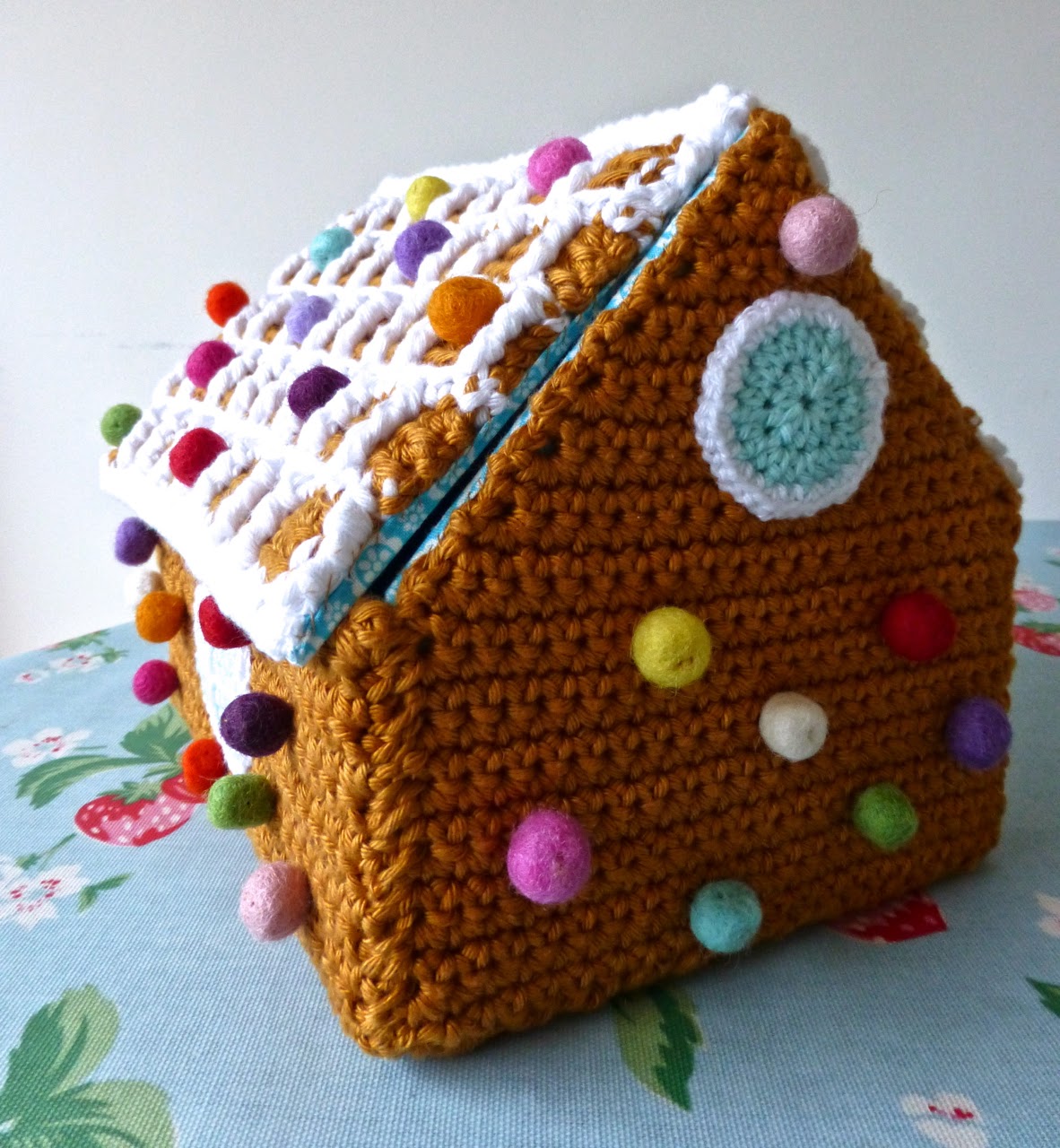 It is not totally useless because the house is actually a box and the roof forms a lid that lifts up on a hinge. Like a peep inside? It's lined with some pale, turquoise, Lecien Floral Collection fabric called "Flower Sugar" - difficult to find a fabric more obviously suited to line a gingerbread house! 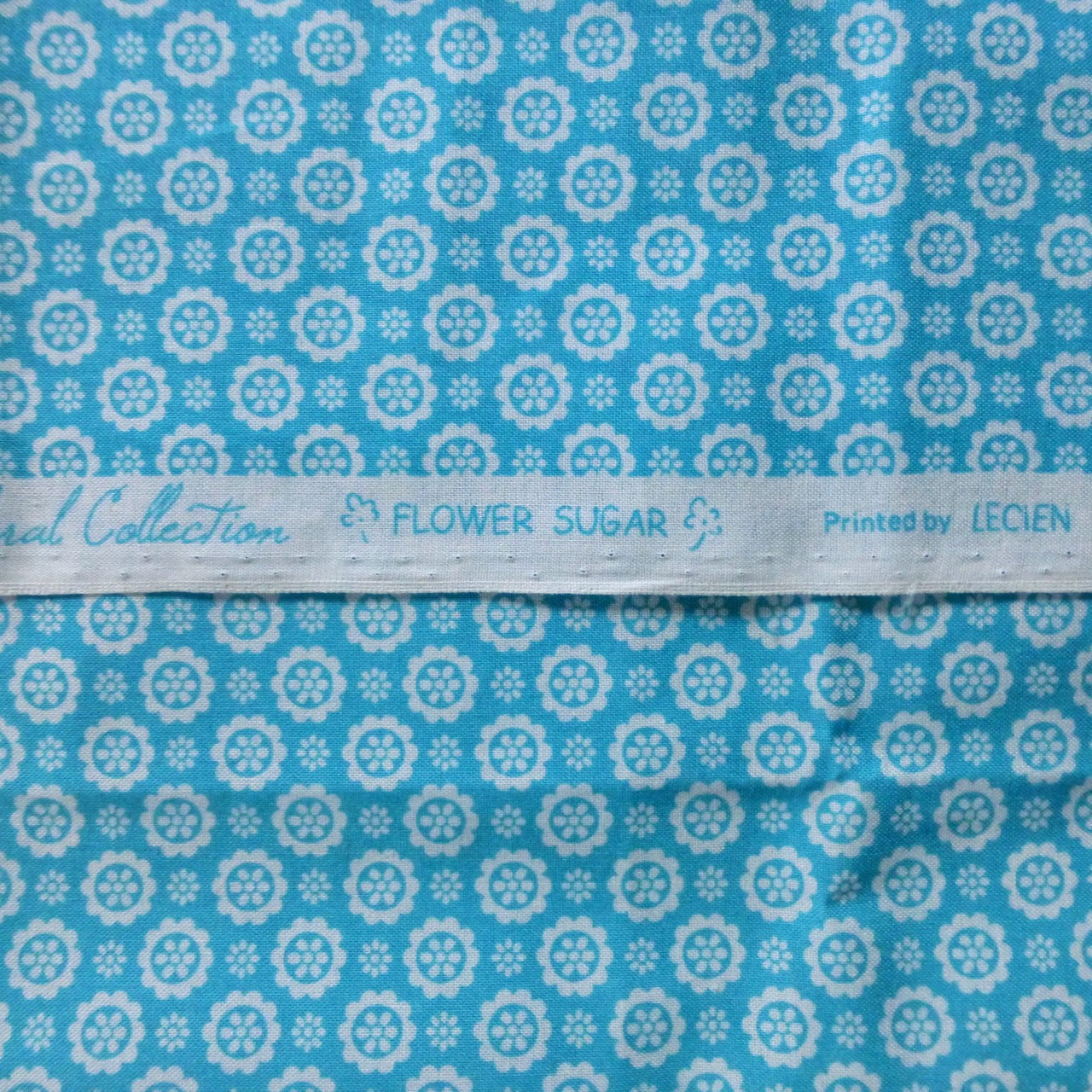 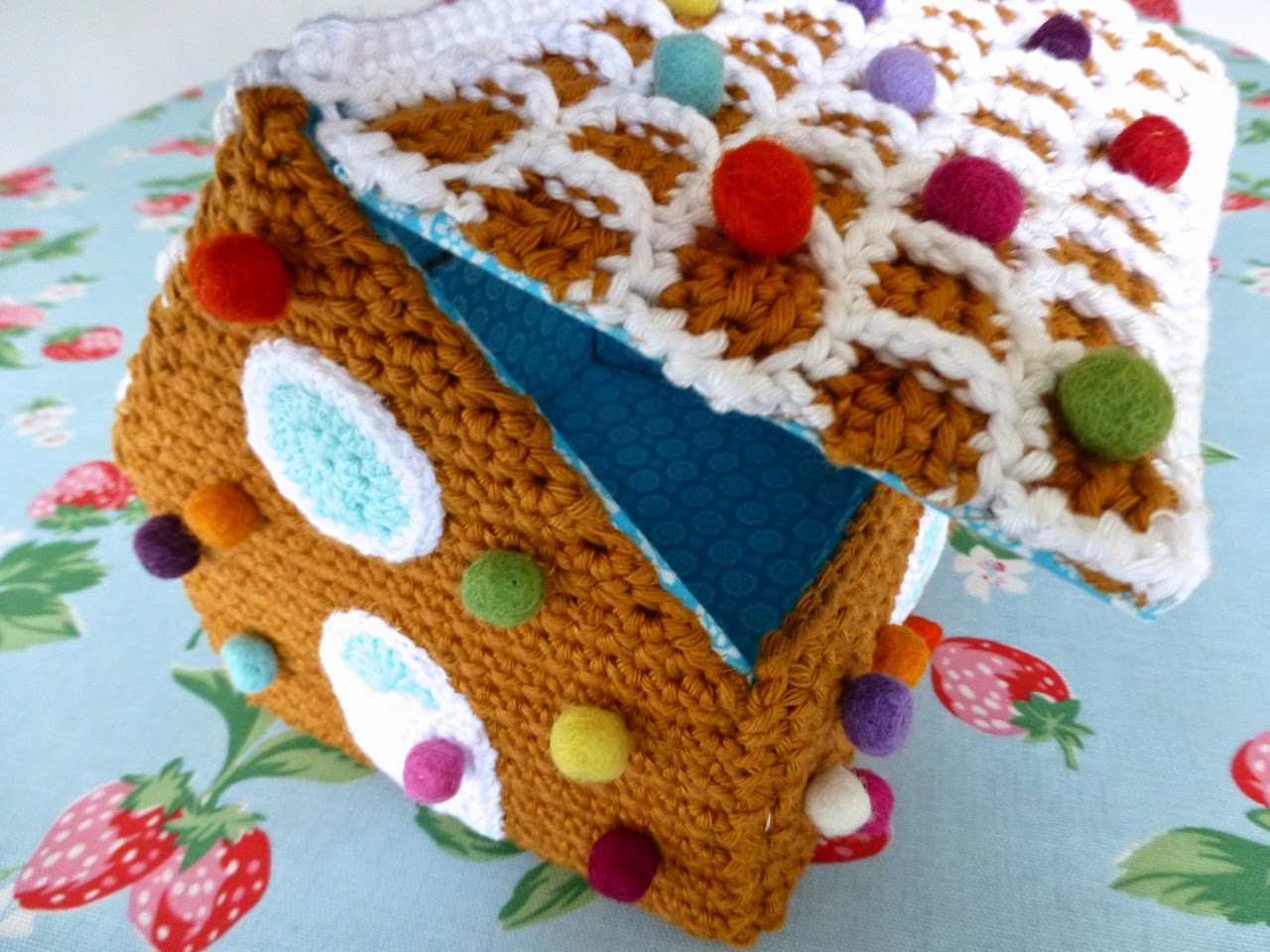 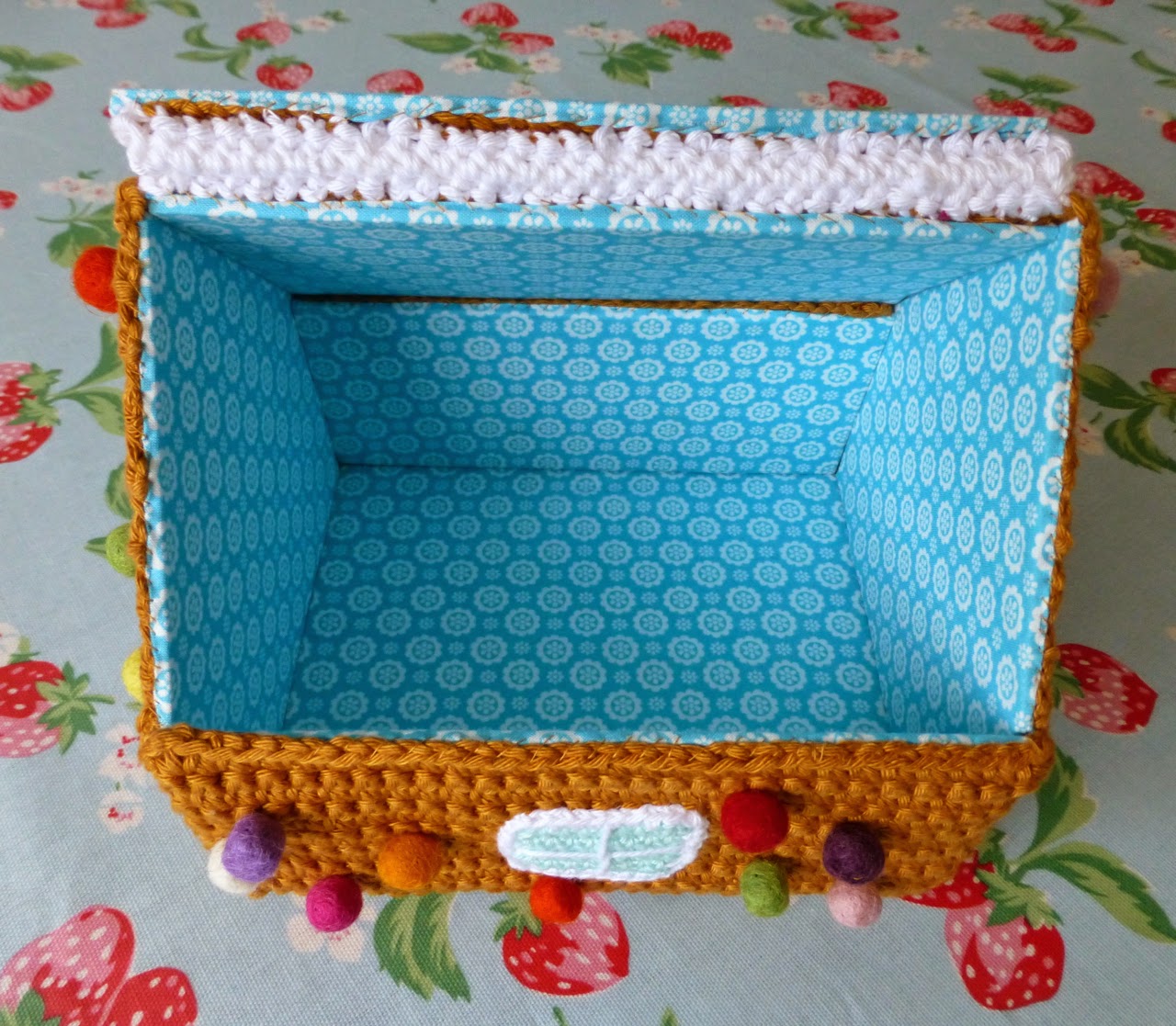 The actual crochet "gingerbread" is made from Schachenmayr SMC Catania Grande yarn in "cinnamon"and the icing is in the same yarn, in white. The glass of the door and windows I made in thinner Phil Coton 3 yarn in "jade" which was the closest I could get to a clear, mint-flavoured, boiled-sweet colour.

The "sweets" that decorate the walls and roof, I hummed and hawed about. I tried buttons but the ones I had, in the colours I liked, were too big. I tried embroidered French knots but they were too small. I spied one of the coasters made from little felt balls that I bought in Amsterdam, and had a eureka moment! 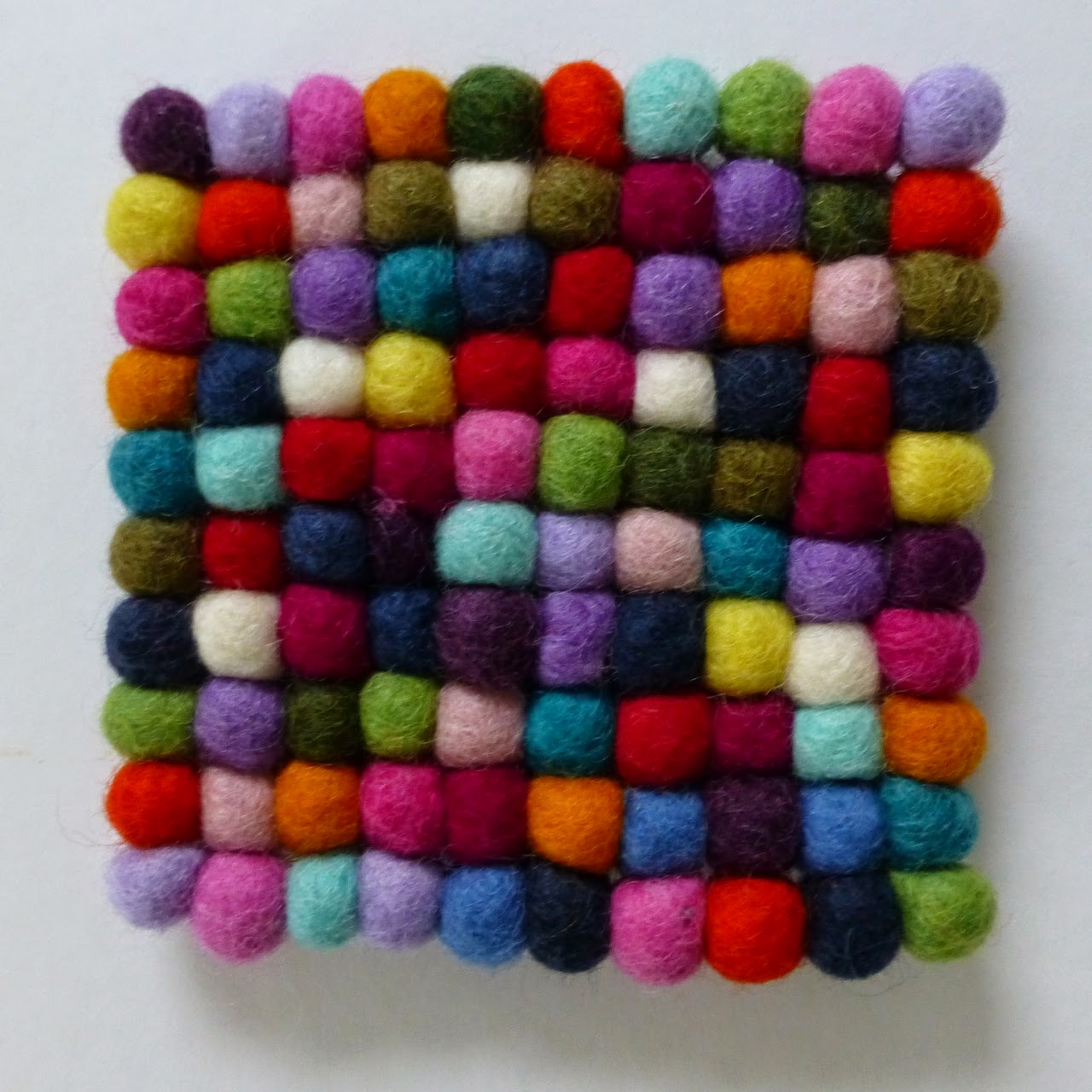 I cut the retaining threads that linked the mat together and hey presto the tiny multicoloured felt balls were just right! 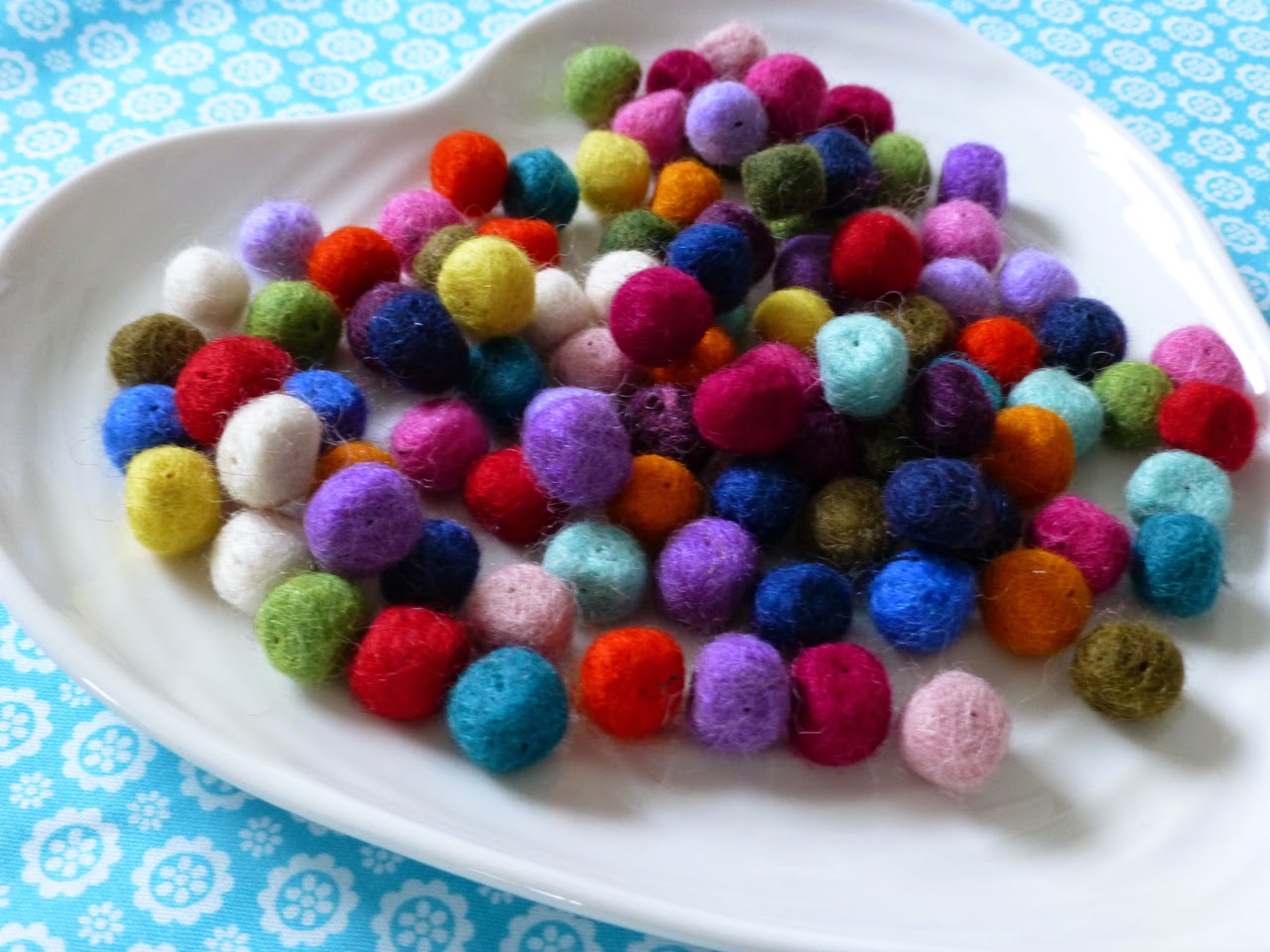 The thing was a joy from beginning to end.

The initial mock-up that I made from cardboard, (culled from tea cartons, in the larder), seemed to replicate the idea I had had in my head fairly easily. 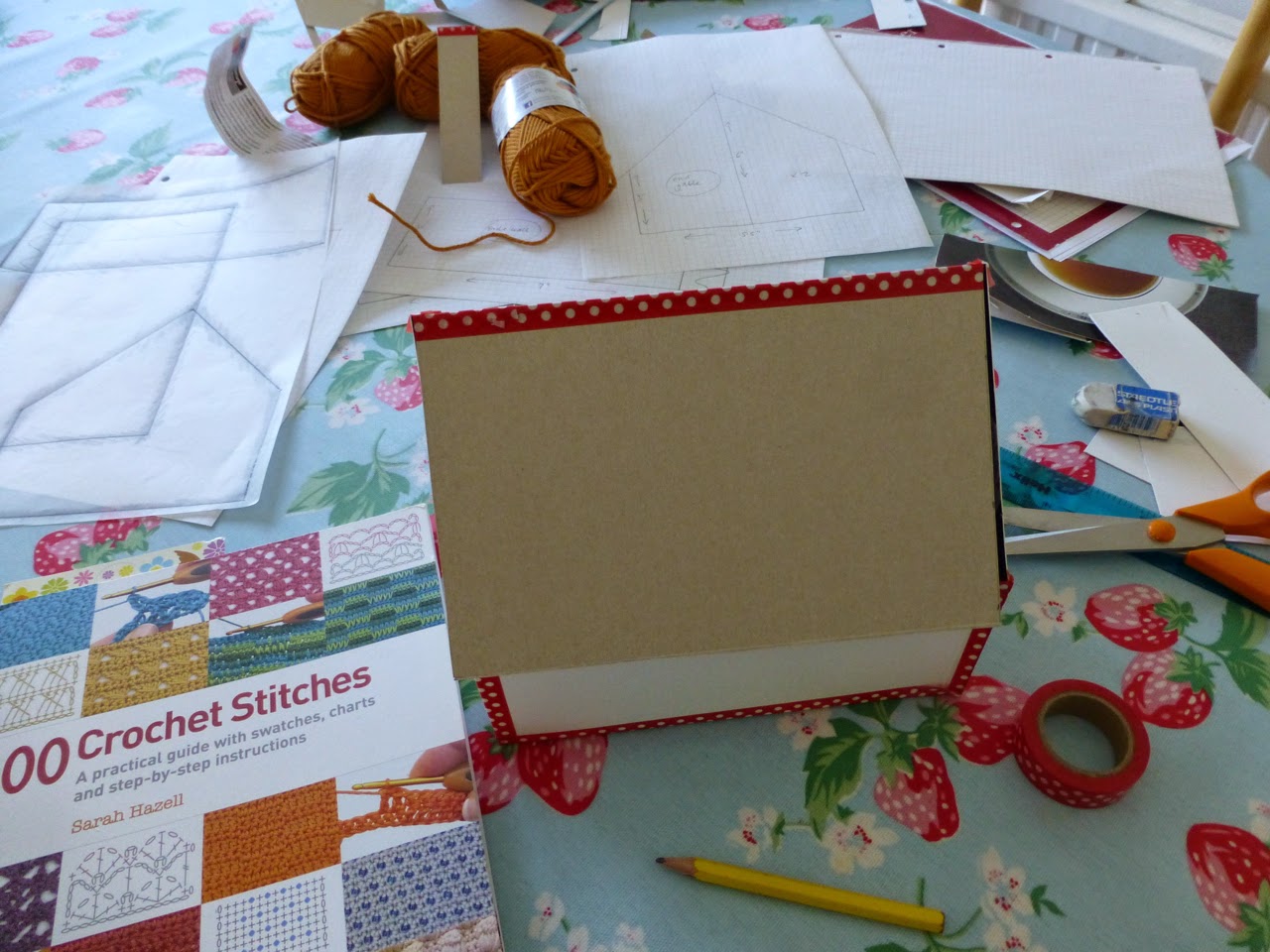 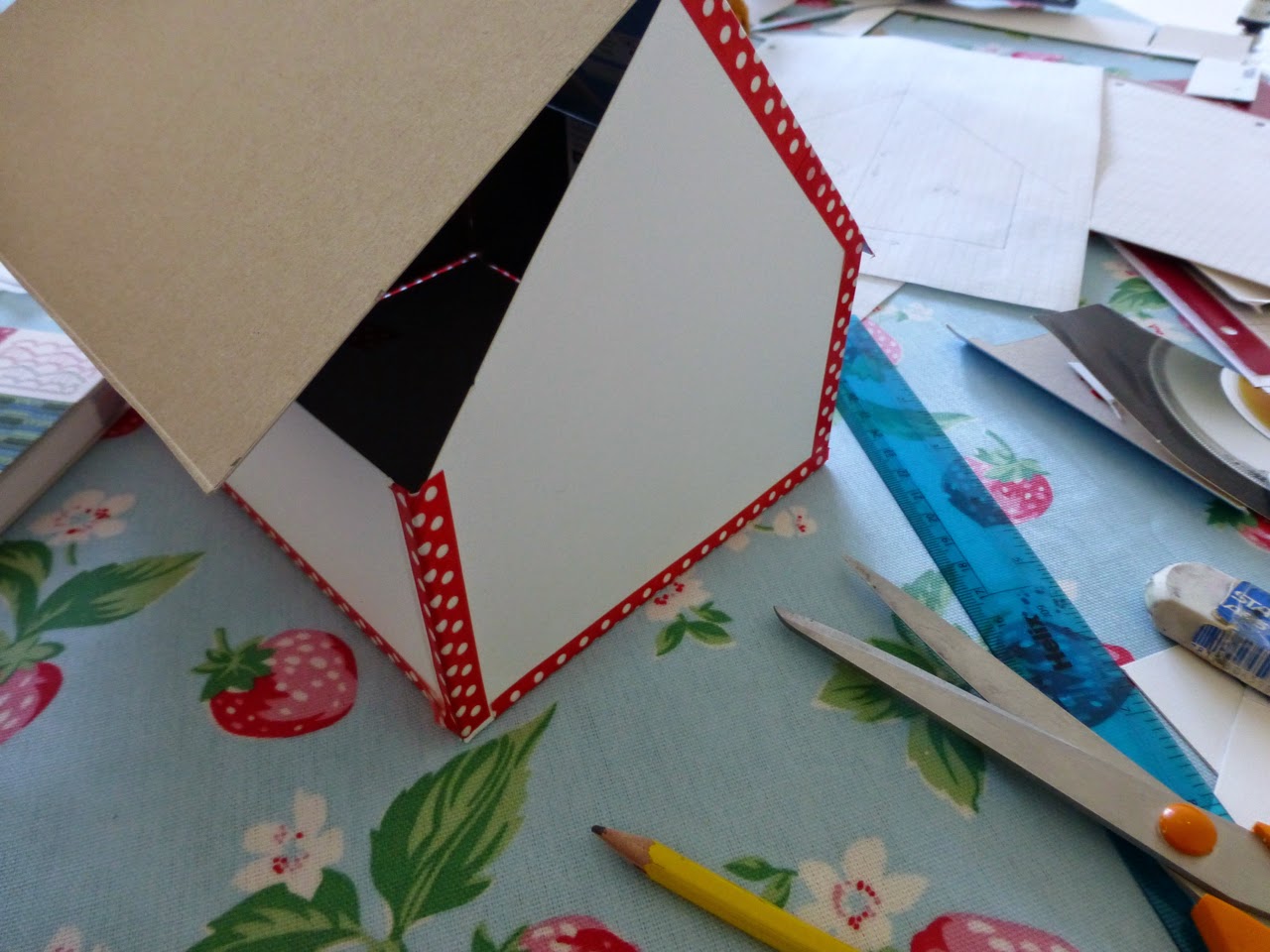 The sewing was straightforward. 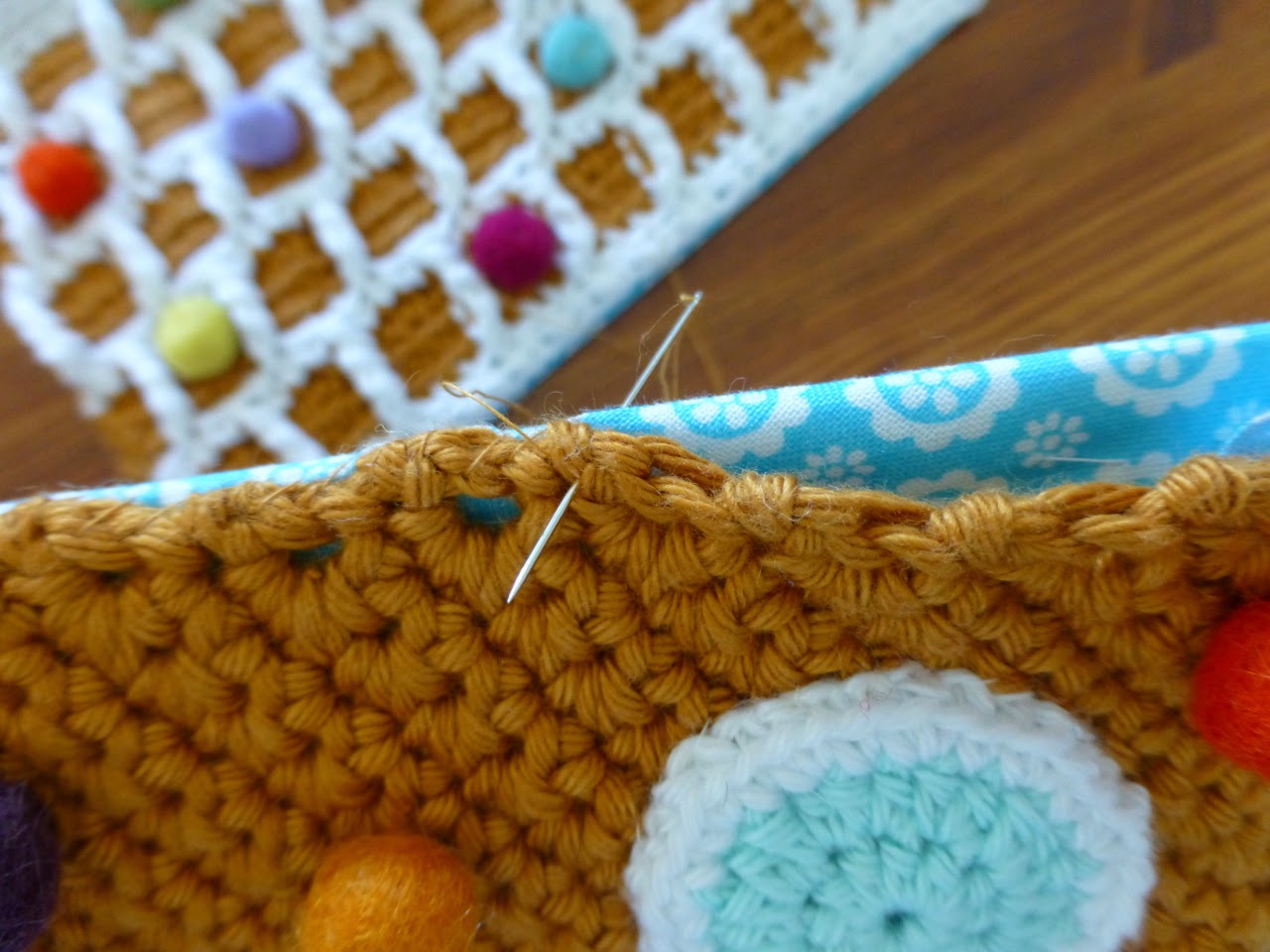 The thing went together as I wanted it to. 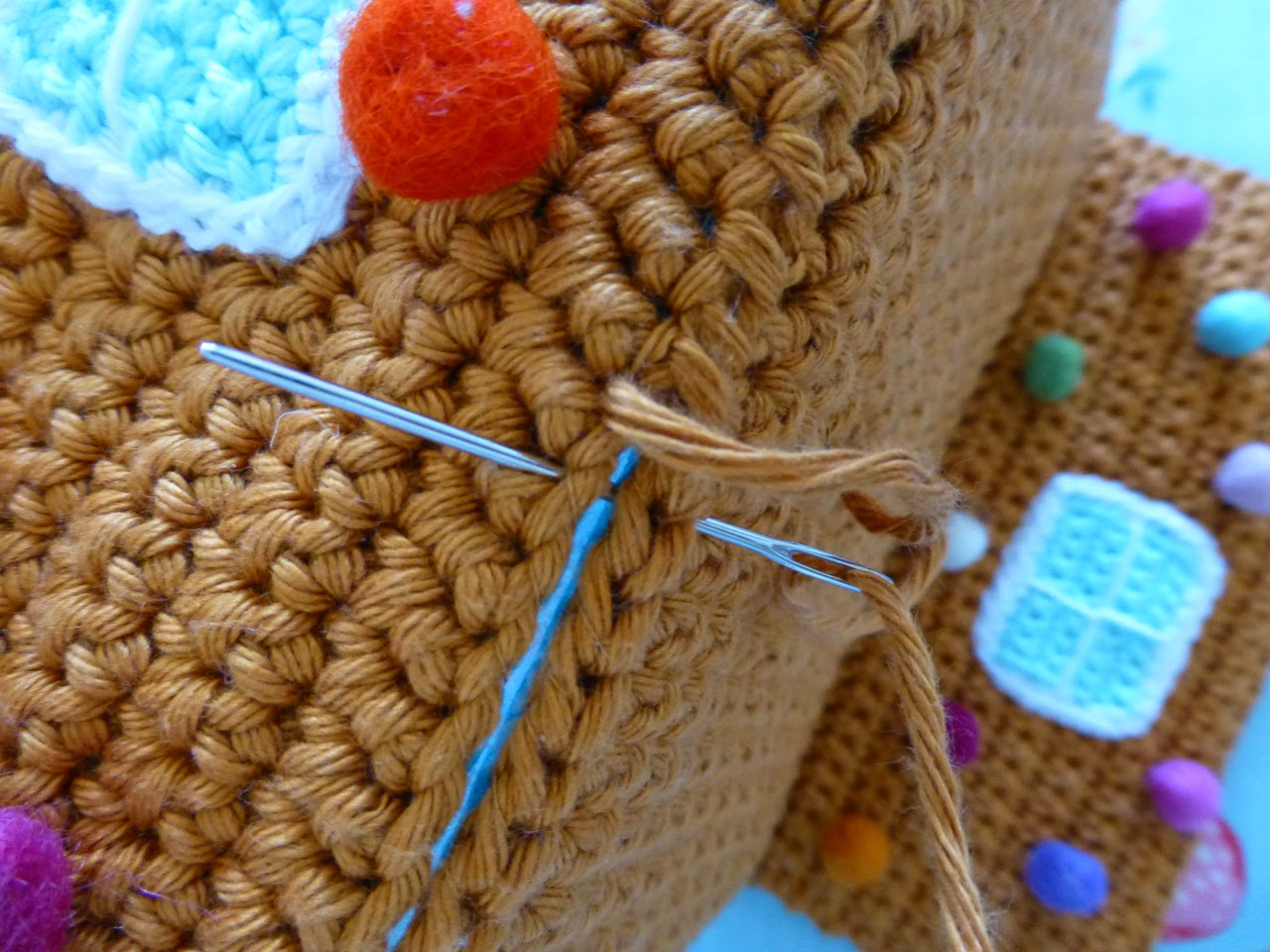 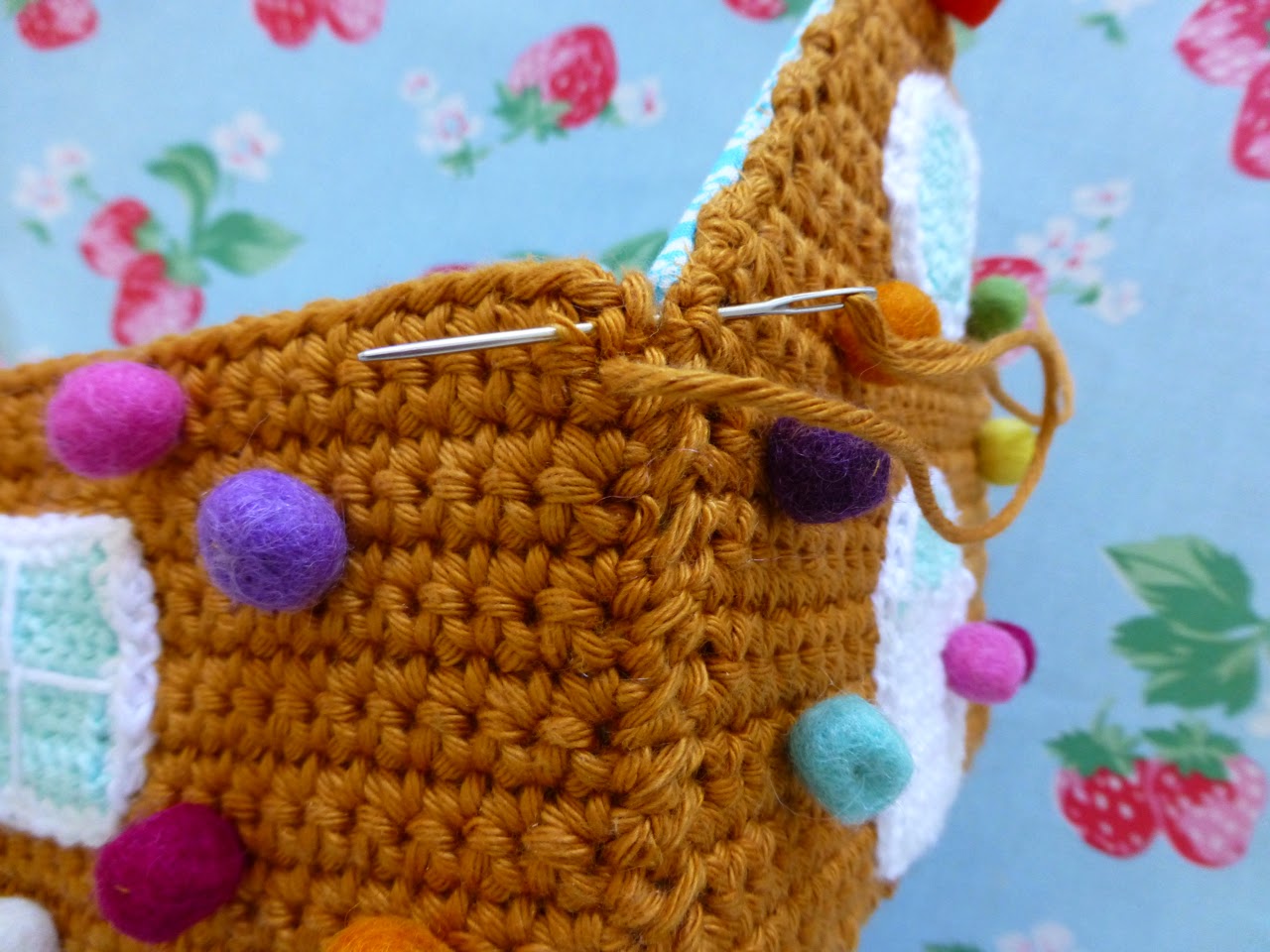 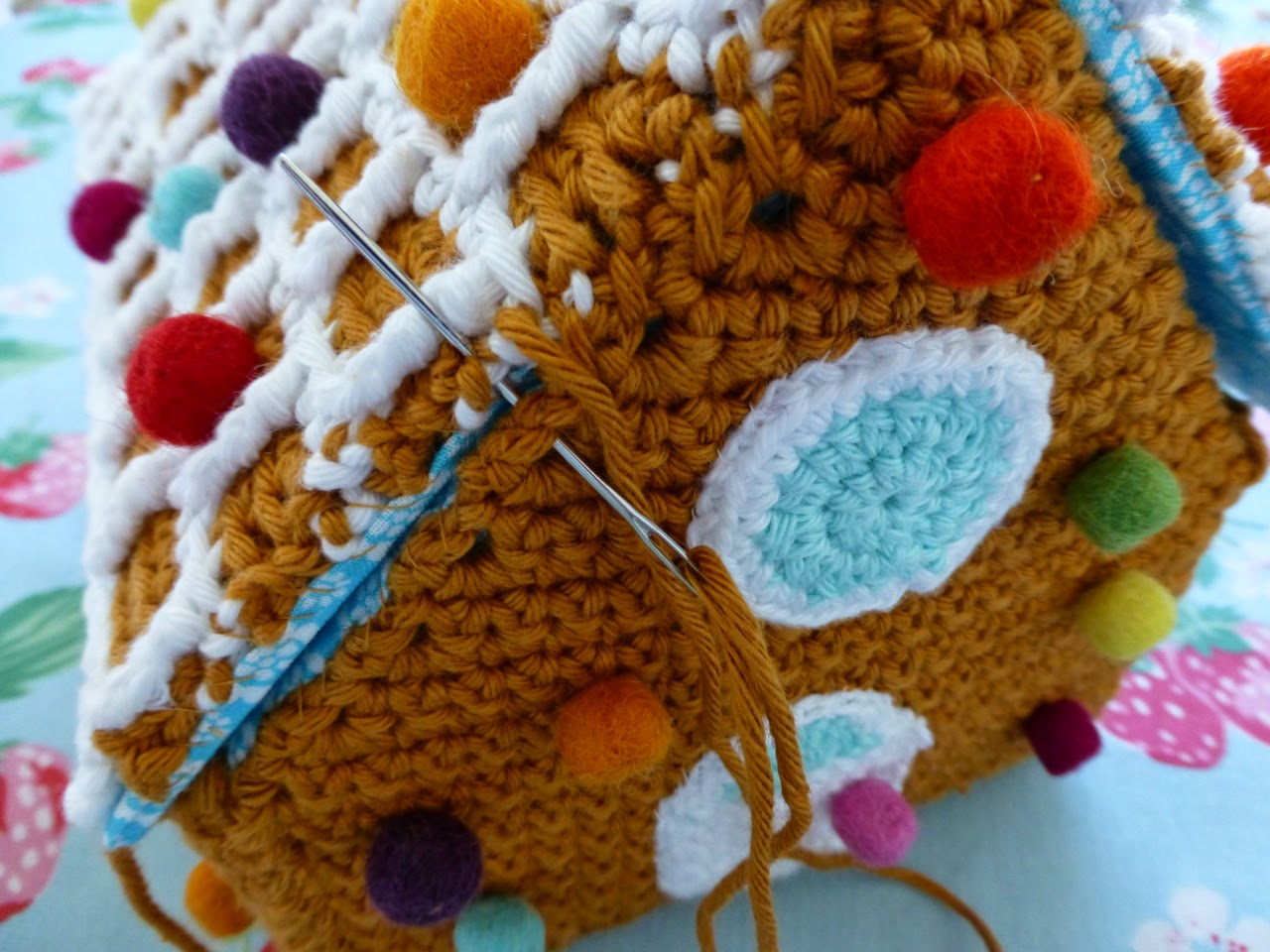 It was inexpensive and un-stressful, it brightened up some dark winter afternoons. What was not to like?!

On a slightly more serious note, as a project, it's also taught me not to feel too enslaved to patterns but to treat my hook and yarn a bit like a sketching pencil, trying out numbers of stitches and rows and adjusting as I went rather than feverishly counting and blindly following a path already laid out for me. It was liberating. I made mistakes of course and so I simply ripped out the mistake and tried again with a stitch fewer or a row more. It wasn't a big deal to undo trials that turned into errors because the panels were all quite small and the idea was so basically simple.

Now, if you're feeling that you might like to give such an idea a go yourself, I have good news for you. At the top of this page you will find a tab for a page with a tutorial guide with all the details you will need to make your own gingerbread establishment. I should preface this by saying that it's not a precise and definitive pattern, as such. Because tension and the yarn and hook size you choose will all affect the exact stitch and row count you will need, but I've shown you, hopefully nice and clearly, how to do it and given you all the wherewithal you'll need to rustle one of these up, should you wish to, either for yourself or for your children or grandchildren.

I wondered about saving this up to post near next Christmastime but I reflected that actually it makes more sense to post it now when it's fresh in my mind and there's plenty of time for anyone else, smitten with gingerbread-building urges, to make one for next Christmas without getting hatched up in the Christmas preparation-rush that descends any time after Michaelmas.

I haven't quite decided what to keep in my gingerbread house so it's been standing empty and unoccupied since I made it. 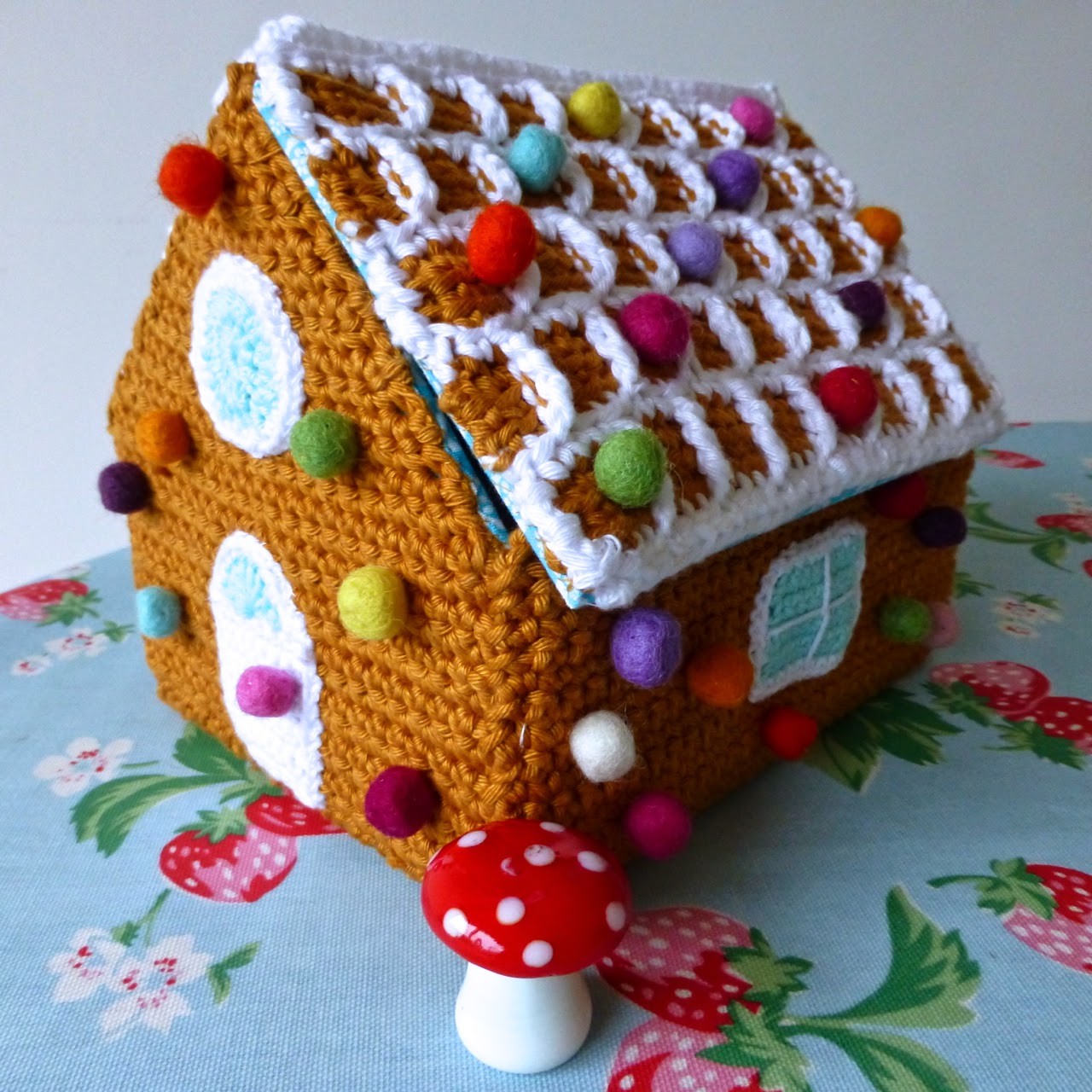 But if you leave a house empty, sometimes new occupants move in surreptitiously ... 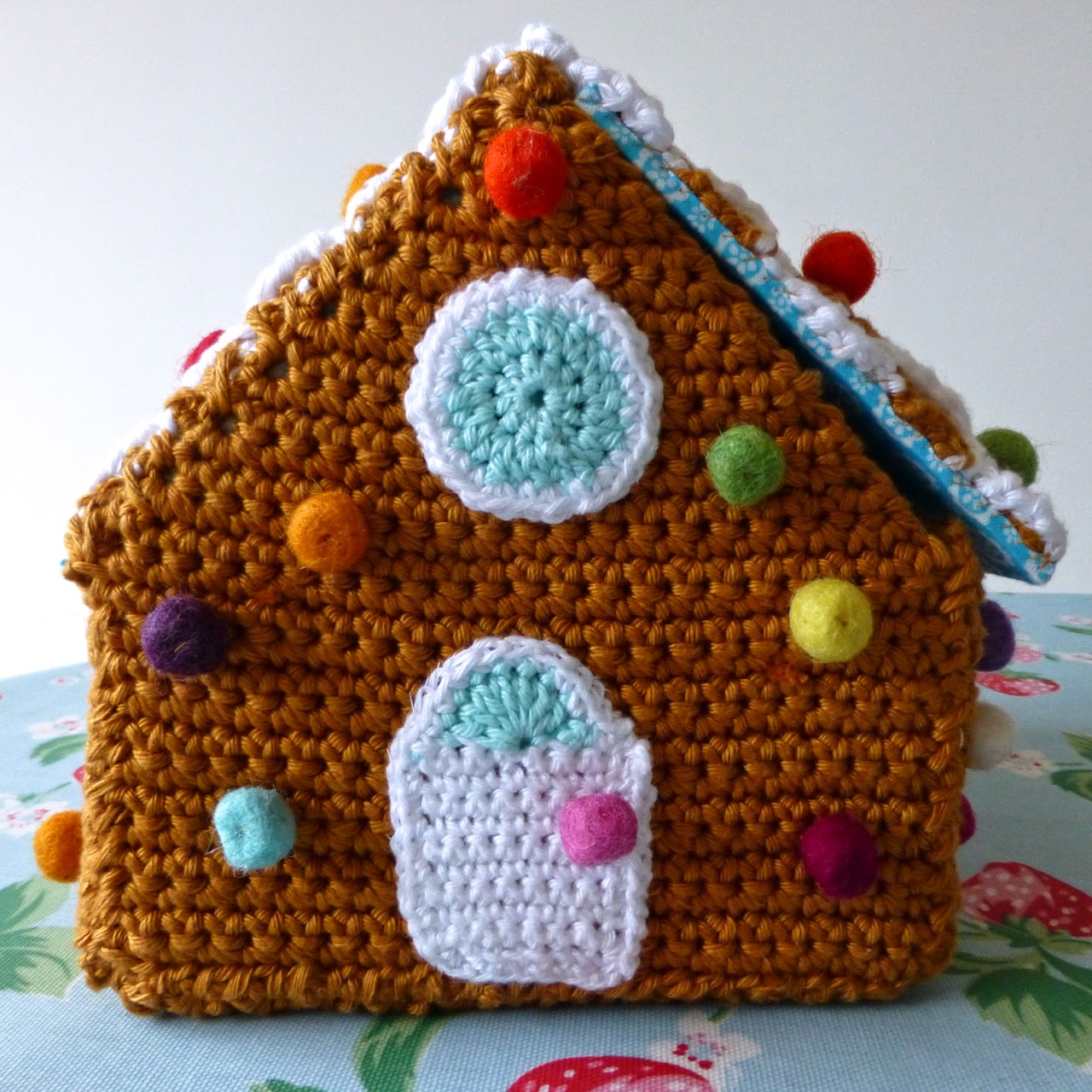 ... that seems to have happened here! 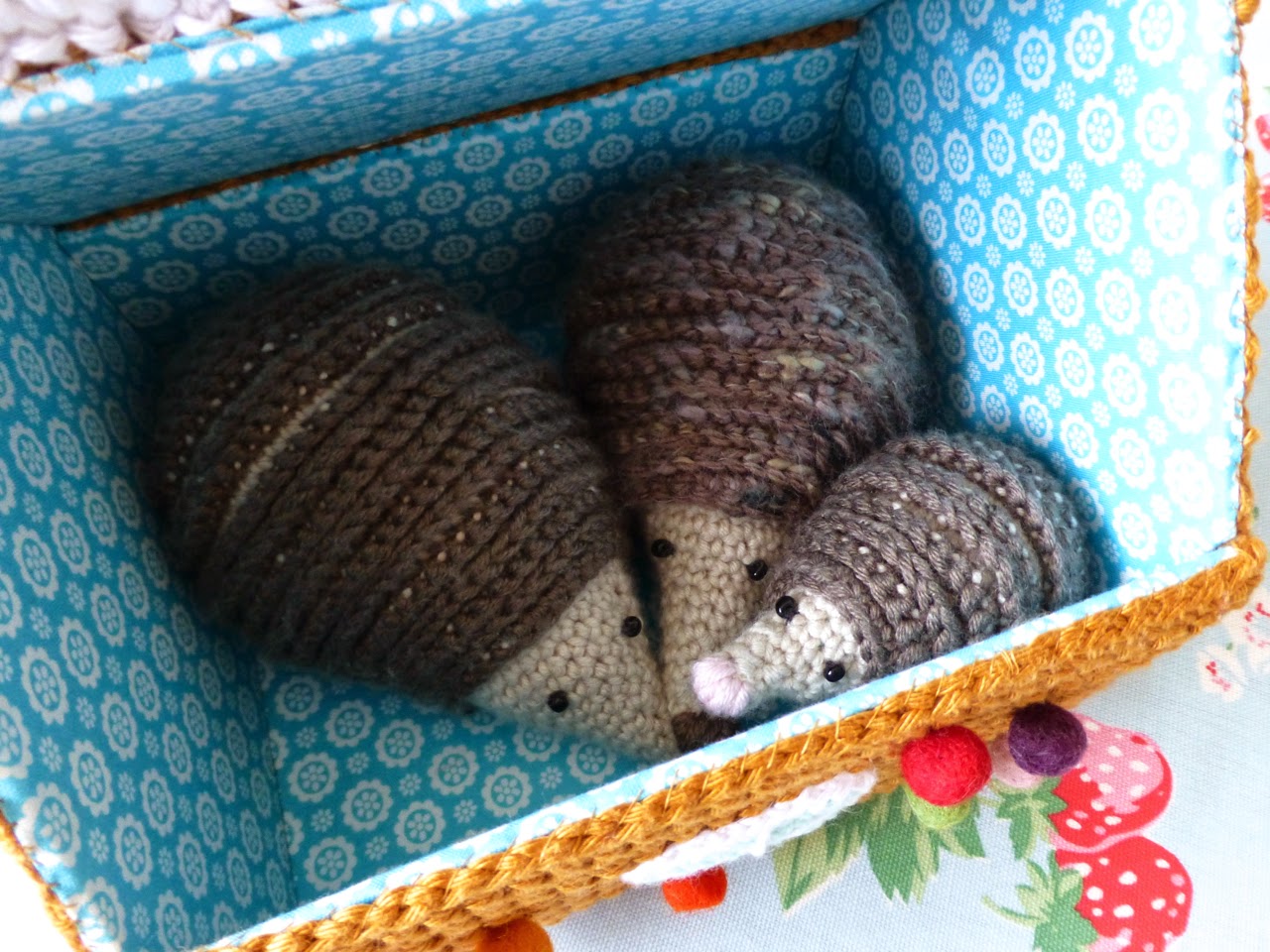 They show no sign of any inclination to depart either! May be when the Spring arrives, but pro tem, they're staying put and I haven't the heart to evict them!


Posted by Thomasina Tittlemouse at 12:57