In My Kitchen In May

Joining in with Celia's In My Kitchen series here, in my kitchen, in May, have been:

A huge number of eggs again. Pic very similar to that in my last "In My Kitchen" post back in March but I am afraid I love these bowls of eggs with the odd soft bantam feather among them. 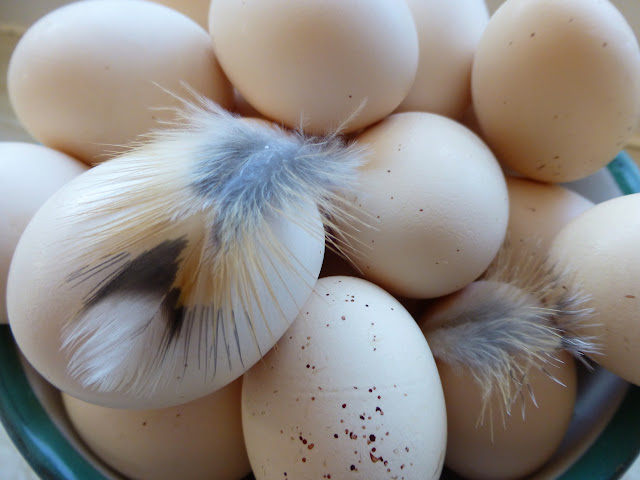 The bantams have gone into overdrive over the last three months and I have been having trouble keeping up. So a lot of my cooking has been using their output: poached eggs on toast; omelettes; ice cream; cheesecake; tarte au citron (the tarte au citron, pictured below has won the prize so far of using the most eggs in one go, twelve bantam eggs went into this in total - ten whole eggs in the filling and two yolks in the pastry! I know, I know, not supposed to be good for you eating too many eggs, but this was a huge tart, eaten in small(ish!) slices!) 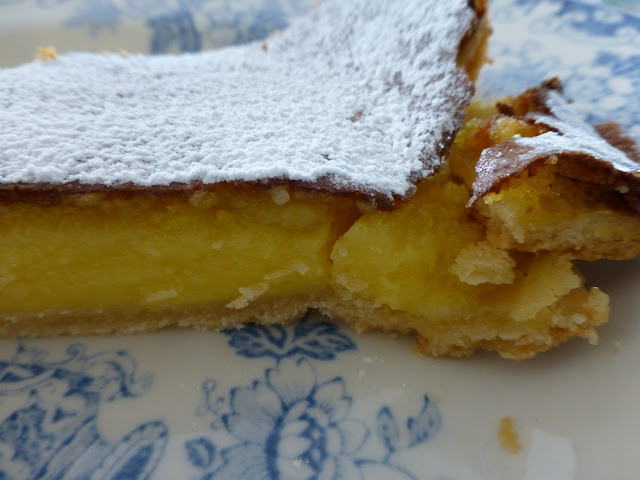 I have also made several jars of passionfruit curd. Homemade curd, of any kind, I think, is worth every slow minute of stirring even though it takes quite a long time to thicken properly. I usually make lemon or orange curd but when passionfruit are not too expensive, this is probably my favourite. Fabulous piled on scones; delectable in a sponge cake; sublime swirled into whipped cream and topped with mango or raspberries (or both) on a pavlova. 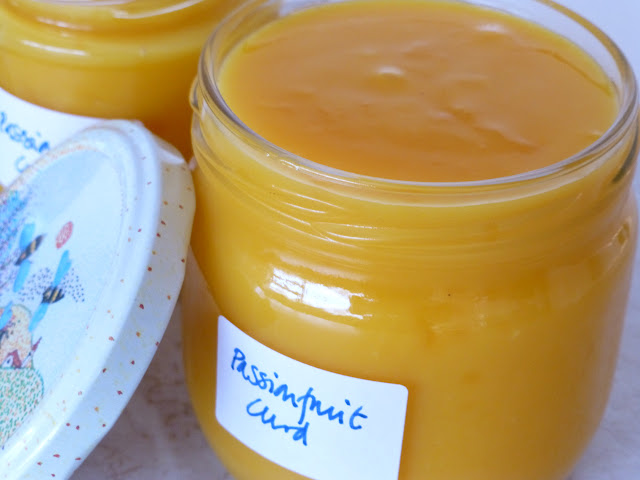 There has also been some experimenting with some recipes from Salt, Sugar And Smoke by Diana Henry which I got for Christmas but hadn't really explored properly, until recently:

Middle Eastern labneh cheese, made from homemade wholemilk yoghurt, drained overnight in a sieve lined with muslin, and then shaped and rolled in chopped fresh herbs, from the garden - mint, oregano, rosemary, thyme and chives all of which are now burgeoning and ready for picking. 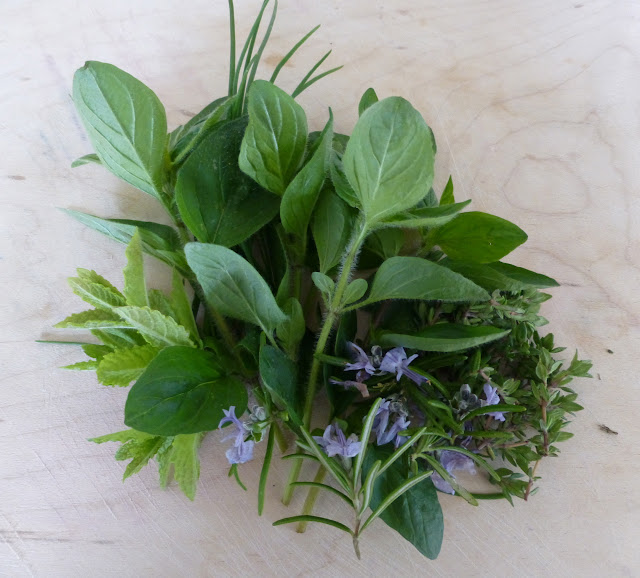 The coated balls of soft cheese are then submerged in jars of olive oil. 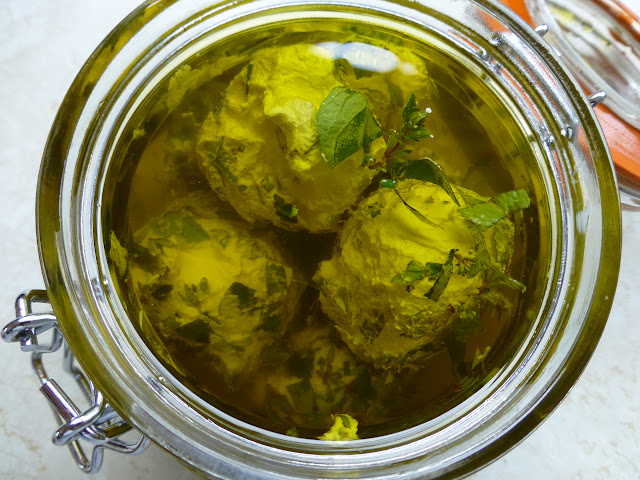 Haven't tasted it yet because it needs a few days for the flavours to mature but it's looking good so far, I must say. Going to crank up the sourdough starter, currently sleeping in the fridge, and make a sourdough loaf to go with it, as per Diana Henry's recommendation.

Rhubarb, rose and cardamom jam from the same book. 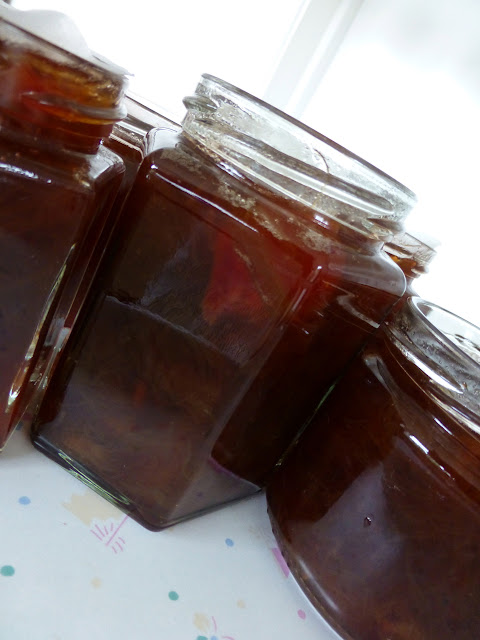 I don't like rhubarb much as a general rule - I know I ought to somehow but I don't - it's just too sharp and too tannic. But the picture of this jam, in Salt, Sugar and Smoke, was just too alluring not to try and as the rhubarb patch outside the back door has been accusing me every time I go out there for not harvesting it, I thought I would give it a go. It's a revelation. The cardamom and rosewater take off all the unpleasant acidity and lend the finished jam a wonderful fragrance and exoticism. It's beautifully softly set too and slides easily atop plain, homemade yoghurt or chilled rice pudding (as in my pic below) to make an unexpectedly entrancing sweet finish to a meal.

Rice pudding, like rhubarb, isn't up there in my normal list of favourite puddings, certainly not served hot, but baked in a slow oven for a couple of hours, with a split vanilla pod and then chilled and served in small bowls, with a spoonful of this jam, which is really more of a French-style "confiture", slipped on top, it's a grown-up contender as a pudding that leaves its nursery cousin far behind. Think of it as "crème au riz" rather than "rice pudding", even if you just make it with milk and no cream - helps the perception no end, if you have bad memories of school rice pudding, and, as we all know, perception plays no small part in these things!

My pride and joy in the kitchen this month has been the first slender pickings from my juvenile asparagus crowns - steamed and eaten alone in all their solitary glory, enhanced only by a swift swirl of extra-virgin olive oil and some black pepper. 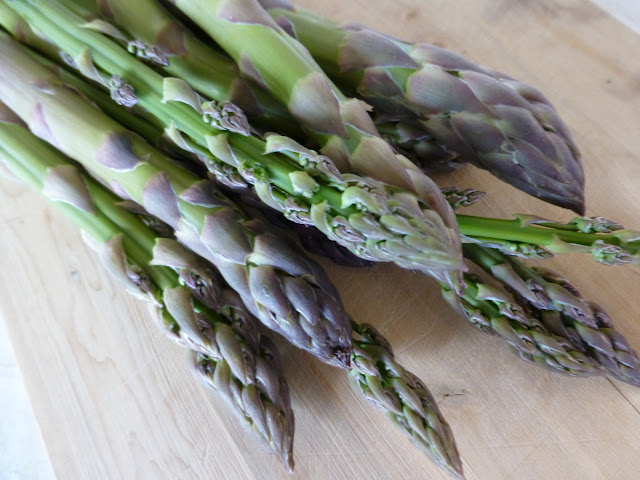 Other day to day offerings have included homemade malt loaf - basically an ordinary half white / half wholemeal flour loaf with a couple of generous handfuls of sultanas thrown in and with several, dark and viscous, spoonfuls of extract of malt added. 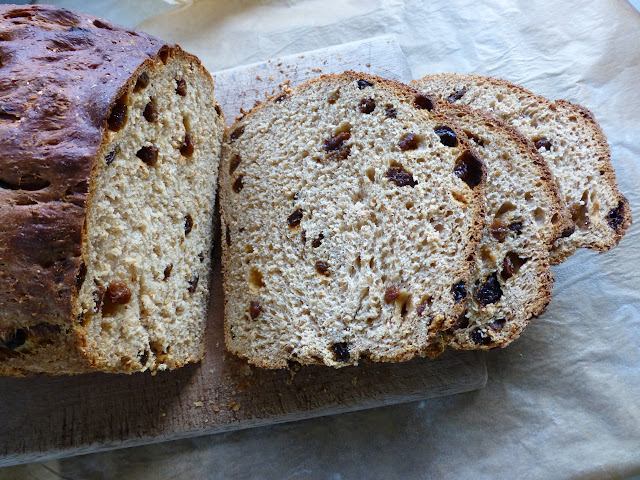 Making this always makes me think of Winnie-the-Pooh and the story "In Which Tigger Comes To The Forest And Has Breakfast" in which the bouncy and hungry Tigger does the rounds of Pooh and his friends in search of sustenance. Finding neither Pooh's honey nor the condensed milk Pooh spots in Kanga's larder, nor Piglet's "haycorns" nor Eeyore's thistles make much of an appealing breakfast (apart from the honey and condensed milk, who can blame him, quite honestly?!) he finally decides that extract of malt, is pretty much made for his purpose, even though it is disliked intensely by baby Roo, who is given it after meals as "Strengthening Medicine"! I am not sure I would give you a thank you for extract of malt neat on a spoon, (unlike my passionfruit curd, just because it is so delicious!) but as an ingredient in bread, extract of malt is great and, Tigger aside, this loaf toasts beautifully and keeps all week, which makes for quick and easy breakfasts when we are against the clock for school, as we usually are in the mornings.

Have a look at Celia's lovely blog here for peeks in other May kitchens.