One of my favourite paintings of all time is the portrait painted by François Boucher of Mme de Pompadour in 1759. Do you know it? It hangs in The Wallace Collection in London and I've loved it ever since I first saw it as a small child. 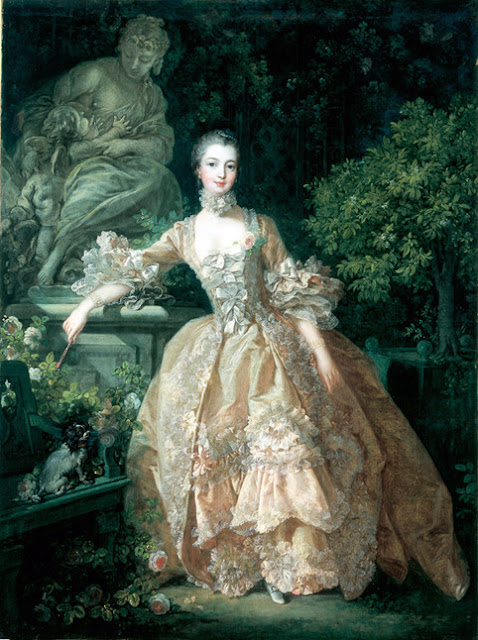 It's painted in that slightly over-the-top Rococo style that Boucher does so well and art critics of the day, such as Diderot, were a bit scathing about it. I don't care if the critics say it is not great art; to me it epitomises a world of elegance and culture, beauty and intelligence, grace and aesthetic finesse. It is also a clever portrait (which Mme de Pompadour may well have commissioned herself) as a subtle, if extravagant, way of communicating with her royal lover. The statue of Cupid being gently but firmly pushed to one side by a Muse in the background, reflects a shift in the relationship between the Marquise and the King but indicates that change does not have to mean the end of their friendship. The iconography suggests that while the flames of passion might have subsided, since their first heady days in 1745, the King's mistress is still a charming friend and an entertaining and cultured companion worth retaining, who can occupy more than one role alongside him. The faithful little dog similarly denotes her willingness to wait on Louis. Much more subtle and dignified than sending pleading or importunate letters not to be forgotten or passed over, although I guess Boucher's fee cost Mme la Marquise a pretty penny! It was clearly worth it though because Mme brought off the tricky transition from passionate mistress to platonic friend and retained her official position at court until her death in 1764.

For us in the 21st C, what Boucher paints is, of course, is a fairy-tale world populated by roses and ruffles, foamy lace and unlimited acres of silk satin, beribboned sleeves and dainty shoes with "Louis heels", painted and gilded fans, handwritten letters and ormolu clocks that chime musically on marble-topped tables with all the harsh realities of life safely out of view. In this world classical statuary, (probably genuine Roman art, plundered by collectors, as so much was in the 18th C from classical sites in Italy), adorns gardens complete with grottoes and fountains and small, very well-behaved dogs wait patiently, at a prudent distance from the hems of those exquisite skirts. Volumes of poetry or philosophy are evident, tossed temporarily on one side by the sitter but waiting to improve an idle hour when the mood takes.

If I had to pick a heroine, Mme de Pompadour would be it, although Anne Boleyn, for whom I also cherish a soft spot, would be a close second. Beautiful, graceful and cultured, but also a shrewd realist, Mme de Pompadour (or Jeanne Antoniette Poisson as she started out in life), somehow combines the best of femininity and intelligence. Boucher painted a number of portraits of la belle Marquise, all of them while she was Louis XV's official mistress and while Boucher was court painter at the French court, during the late 18th C. There is another very large and very spectacular Boucher portrait of her in the Alte Pinakothek in Munich. I love the way she's painted in this portrait, sitting with her back against a mirror so that you can see the back of her elegant hair-do and the frothy bow at the back of her neck. And if I could walk safely in heels, I'd do anything for a pair of those pink satin beribboned mules she's wearing! Would that my own feet were that dainty! 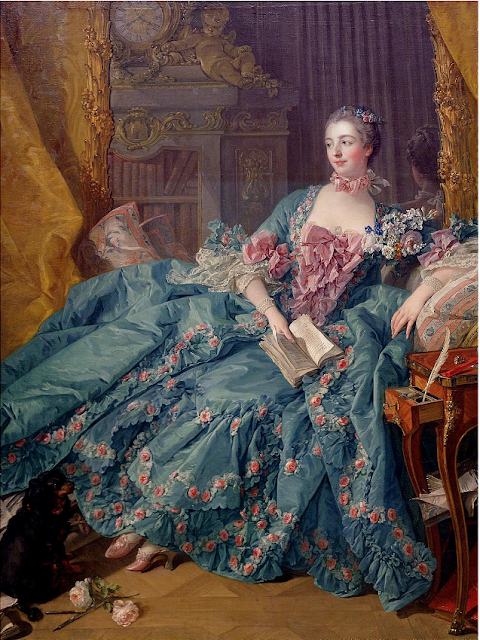 Prints of both the Wallace Collection painting and the Alte Pinakothek one hang on my study wall and I love them. I was looking at them the other day after my new dressmaking friend arrived in a welter of cardboard and polystyrene packaging and was lying prone and rather undignified in several pieces on the study floor. Helped to a more dignified standing position and with her single leg bolted securely in place, my new dressmaking friend waited patiently in a corner while I considered where to place her and whether or not she might benefit from a smidgeon of cosmetic surgery!

As she waited beside the prints on the wall behind her, I was struck by the stillness that emanated from her and which seemed akin to the stillness emanating from the paintings. My new friend has no head and was "made in China" but her fabric "skin" is a French print and she has a certain French elegance about her so I thought perhaps she ought to be given a French name but nothing quite seemed to fit her. Anyway the longer she stayed near the portraits of Mme de Pompadour the more she seemed connected to them so in the end I gave in and a new Mme de Pompadour she has become. I am not sure that the original Mme de P would be flattered to have a dressmakers' dummy named after her but I hope she doesn't mind - it's intended as a compliment. 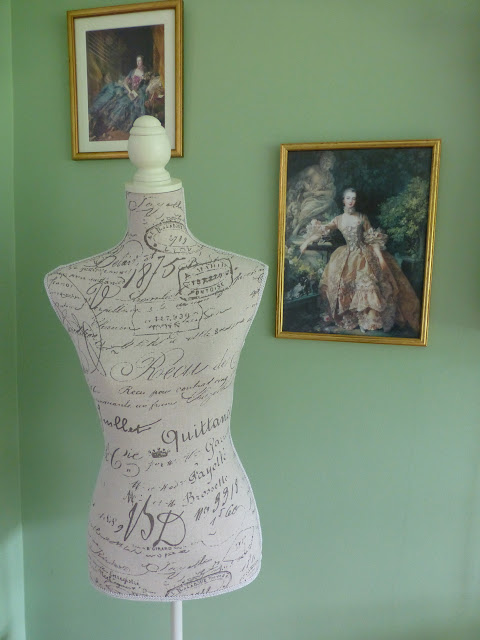 I've wanted a dressmaking dummy for a long time but the ones I had seen have been rather expensive and I just didn't quite feel I could justify the cost. And then there was the question of where it would live and whether it would get in the way of stuff. I'd kept the longing at bay until Judy posted about the arrival of Flora here. Flora's flowery fabric was what did it, added to Judy's comments about the difficulty of pinning hems and seeing how a garment is going to look on you when you're making it yourself which resonated all too clearly with my own experience. So of course when Judy kindly emailed me the website from which she had ordered Flora I had just to have a look. And I was pleasantly surprised by the range of possible dummy options and the range of prices. Of course if you don't do dressmaking yourself, any such dummy will be a waste of money, but if you do, especially for yourself, then it's worth considering.

My Mme de Pomapdour, despite her grand name, is not as sophisticated as Flora! You can't adjust her vital statistics and she doesn't come with an automatic hem measurer down by her feet but actually, for my purposes, she's great. I don't make a lot of tailored, closely fitted items so I don't need her to replicate my measurements and just being able to hang a garment on a three dimensional body rather than a hanger is a huge help. I've found anyway.

Mme's French "skin" is also beautifully neutral for setting off the colours and prints which are what I tend to work in but I did feel she was just a shade too muted. I toyed with the idea of swapping her existing print with a flowery one but the logistics of fitting this and the benefits of her being neutral stayed my hand. Back to the paintings for inspiration, now that affinity had been established! And of course! What she needed was just a little 18th C romantic ornamentation so I've strung a string of pearl beads around her neck and added a crocheted choker with a crochet rose inspired straight from Boucher's brush and voilà, je vous présente, Mme, la Marquise de Pompadour, in all her glory!

She has now migrated upstairs close to my sewing machine and in a tranquil and elegant way is working hard for her living! 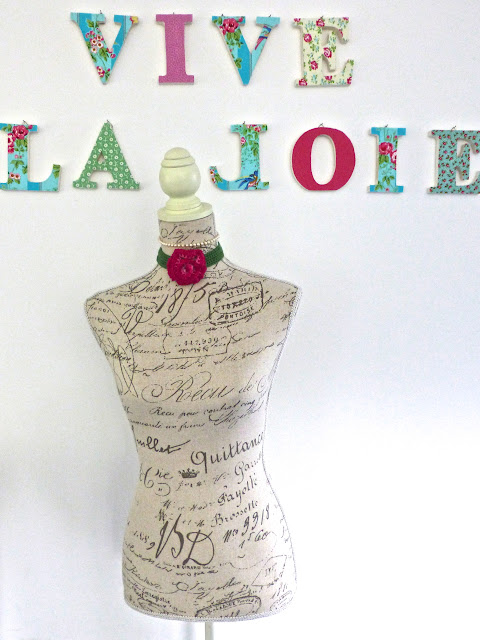 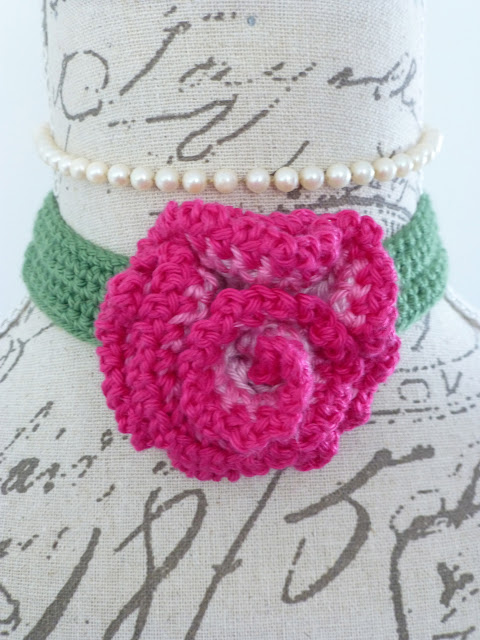 The rose is a "Ribbon Rose" from Suzann Thompson's "Crochet Bouquet" and the choker is just five, very simple, rows of single crochet with a crocheted loop and a pretty button to fasten. All made in Cascade Ultra Pima cotton on a 4mm hook.

I am intending to borrow the choker with the rose from her to wear myself occasionally and the pearl beads too, but for now they are happily hers! 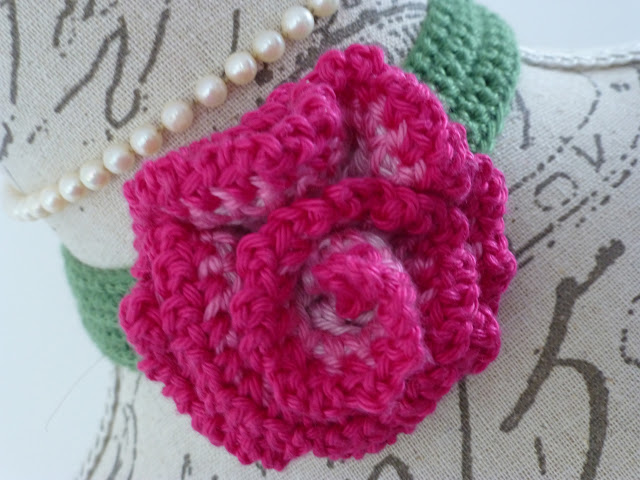 
Posted by Thomasina Tittlemouse at 18:35