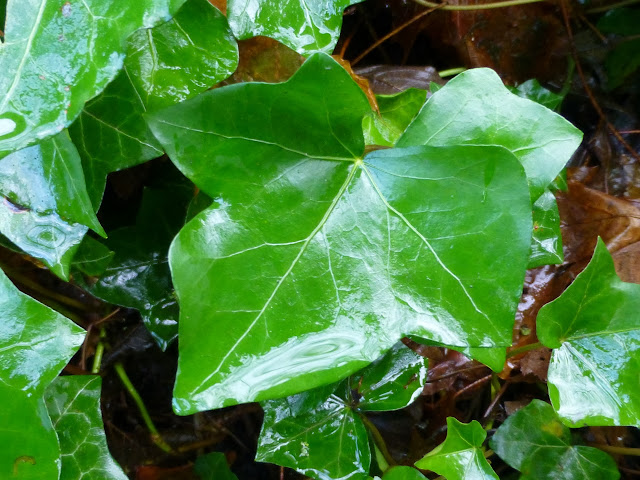 Not far from where I grew up, in a leafy suburb on the edge of north-west London, is a village that is definitely not suburbia, despite being only a few miles away from it. I'm not quite sure why it feels different - perhaps it's the duck pond, cricket pitch and the old-fashioned, independent ironmongery that seems to belong to a previous, simpler and more rural era. The houses are not all picturesque cottages, by any means and, in some ways, even if it's a village as opposed to suburban sprawl, it's not especially attractive. One of its roads is called "New Year's Green Lane" - a typically quaint, English road-name, derived from goodness knows where. But it is a proper country lane - very narrow, muddy, steep-banked and bordered with hedgerows that are thick with holly and typical English trees - oak and ash mostly. You can't see round the bends or over the top of the hedge so you get that slight mysteriousness that traditional, secret, English lanes have. Of course you'll find many better examples of secret English lanery in remoter parts of the country, especially in the south-west, but nevertheless, this one was near to home and perhaps because of its curious name, it's stuck in my memory.

New Year's Day brought it into my mind again and it occurred to me that, whatever the derivation, that little green lane has a certain metaphorical resonance about it for the New Year.  It seems to me that standing at the brink of the New Year is rather like looking up a secret, green lane in winter. This pic here is not the eponymous New Year's Green Lane I refer to above, but a little lane round the corner from where I live now. It has the same feel though - steep banks dotted austerely in winter just with moss, ivy, holly and bare-branched alder. Even though I know what it looks like past the bend, it still has a mysterious hiddenness to it as it crosses the brook, currently full of the flood water of recent weeks. 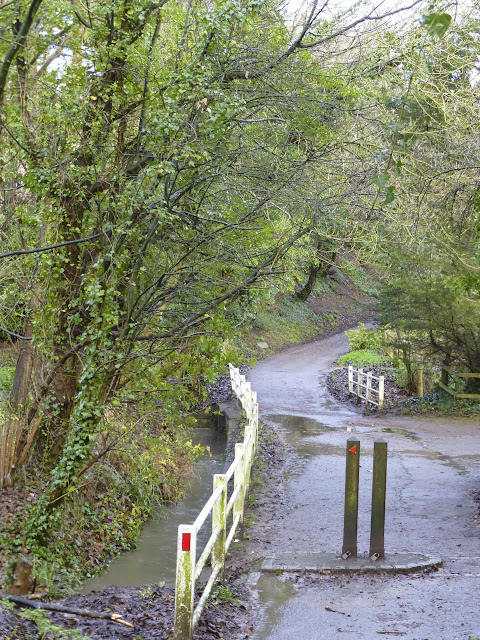 At this time of year one looks ahead at the winding ribbon of road, empty of traffic and pedestrians (because who is out on a dark January afternoon in the driving rain and cold?) and, in winter's austerity when there are no distractions to catch the eye, one's focus is just on the curve and incline of the path and the intense green that persists here and there in the patches of moss, ivy and holly that populate the otherwise deserted banks. 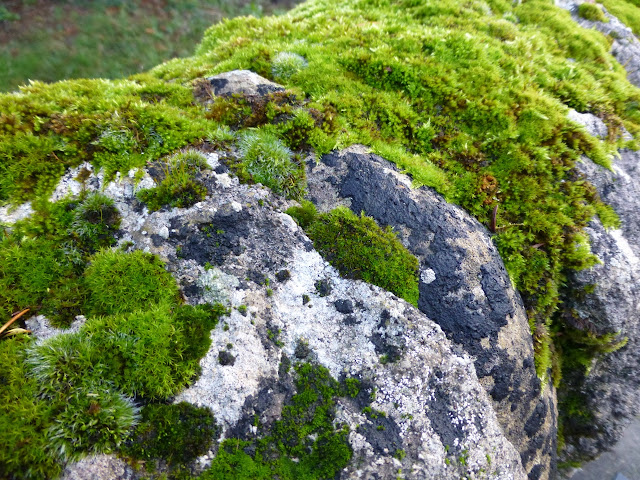 As with the ribbon of road, one cannot see round the corner of a new year, but one peers into it nonetheless, as it begins, well, I do anyway. Later, it won't bother me so much, that hidden curve and the unknown that awaits past the bend - I shall be distracted by the scent of wild garlic and its starry, white flowers, the sudden blue of violets in the bank and later still the warm, sweet smell of wild roses and then the lure of purple blackberries and shiny elderberries, glinting in the September sun, which will call to me from the hedges that border the lane, before I can begin to look past them. Similarly, as the weeks go by I will cease to look too far ahead into the year and will be distracted and absorbed by today, this week or next and what it contains - the ephemeral, and the less ephemeral, bits and pieces that make up my days.

I find the "looking up the lane" phenomenon of the New Year disturbing. Unsettling; increasingly disconcerting, as I get older. But the green that persists in the banks of the lane reminds me that life is always dynamic and, whatever lies around the corner, the sap of growing and living is quickening and nurturing both what lies hidden and what is already obvious. I never used particularly to like green as a colour, especially lime green with its high percentage of yellow and red, but I've found myself more and more drawn to it recently and as the New Year has nosed its way in, it's made its presence felt big time and I've welcomed it.

The colour has infused my dye vat 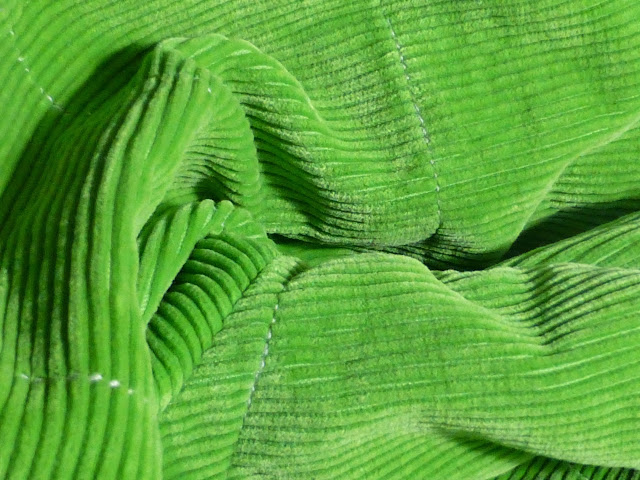 and made its way into my decorative borders of little coat squares inspired by Lucy of Attic 24's wonderful coat revamping project which you can read about here and which inspired me to do likewise with an old jacket. The dye on the packet may have been called "Tropical Green" but as far as I am concerned it's "New Year's Green"! It's as vivid as any January moss or wet-bright ivy for sure! 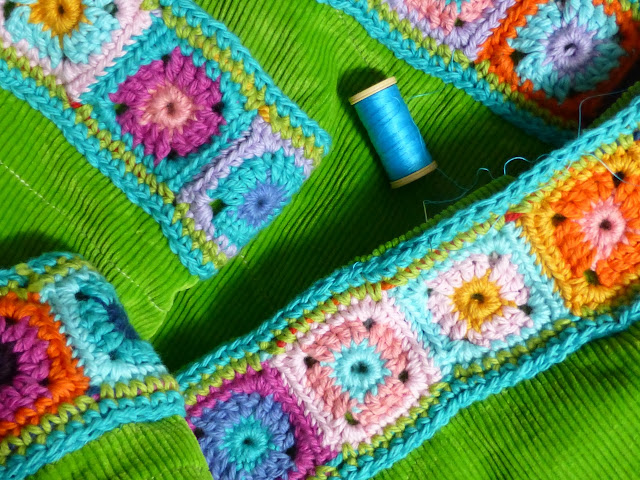 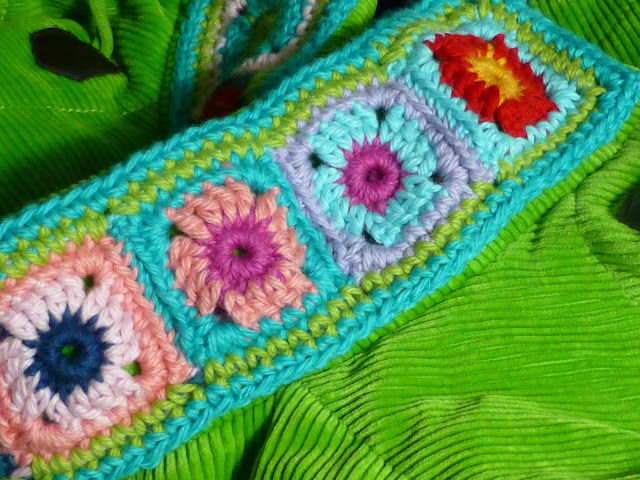 It's crept into my post-Christmas hooky project and wound its way across the granny clusters of more muted shades of blackberry, teal and soft rose, a little like a winding lane itself. 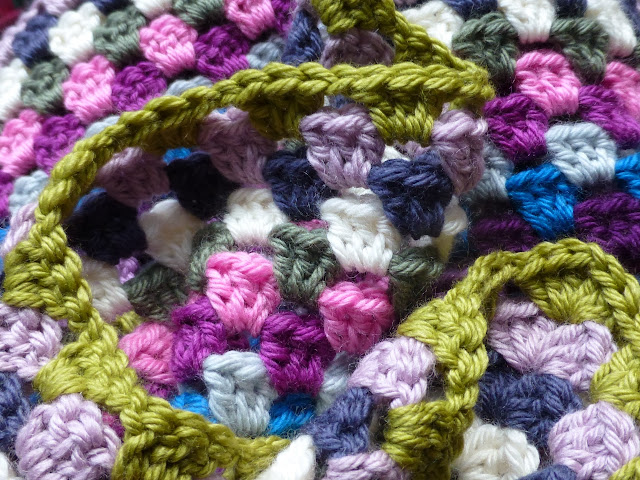 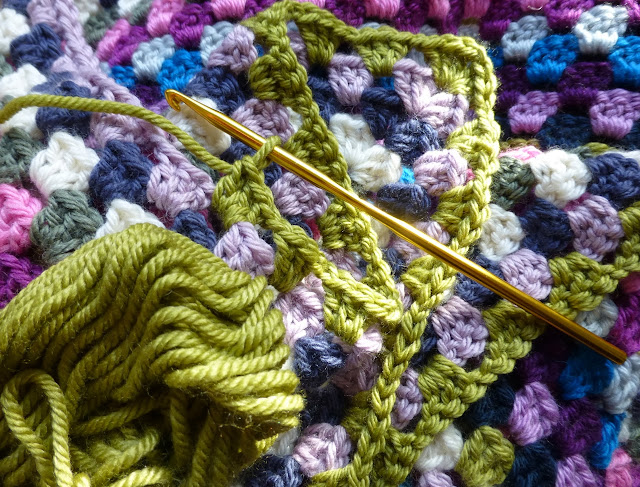 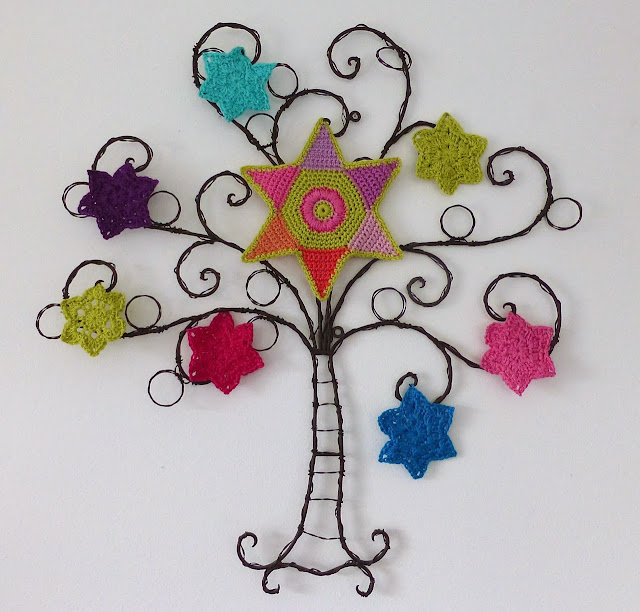 And as a result, somehow it's been turning my annual New Year feelings of unsettled disturbance into happier ones of green promise.

Happy New Year to you and yours - I hope that for you too it will be a green one, if not literally then metaphorically - full of promise, hope and life.


Posted by Thomasina Tittlemouse at 15:03