It was the 16th C French King, Henri IV, aka Henri de Navarre who, I believe, said, "I want there to be no peasant in my realm so poor that he cannot put a chicken in his pot every Sunday." It became a graphic measure of being above the poverty line and one that caught the popular imagination. Hardly surprising if you lived off the monotonous European peasant diet of dense, black bread and dried peas all the time. In fact Henri couldn't quite make good his promise but it stuck in the mindset of the French people as an aspiration worth hanging on to and by the time of the French Revolution, Henri's promise, and the delay to it becoming reality, had been turned into a little ditty, chanted as a political slogan:

(Finally the chicken's going to get put in the pot.
at least that's what we assume
because for the last two hundred years that it's been promised
it's been being plucked!)

Recipes for La Poule au Pot abound and I am sure many of them go back as far as Henri IV's day - it's the kind of cuisine rustique that is timeless.  Of course, we aren't talking about the kind of chicken we cook and eat today, with a lot of tender, white meat that cooks quickly and easily under a grill or even, is done to a turn as a roast, after an hour and a half in a hot oven; we're talking about a boiling fowl, probably several years old and past laying; a lean, scraggy bird, nearer to stringy than plump and, not to put too fine a point on it, probably pretty tough. Needing long, slow cooking for several hours, submerged in liquid with a few pot-herbs to flavour the broth and bulk out the meat. Traditionally these included onions, shallots, garlic, leeks, turnips, parsley, bay leaves, cloves. At the end of the cooking period the fragrant, intensely flavoured broth was served first and the meat and vegetables afterwards. Very simple, but very good. I make a version of this myself, in the winter

The nearest we can get to the kind of chicken a French 16th C peasant would have recognised and been pleased to see in his pot is pheasant. Gamier, leaner, rangier birds than modern chickens altogether. It's coming to the time of year when pheasant is again available and I am looking forward to that. Cautiously.

I love roast pheasant. I make pheasant soup with the carcase and any remaining fragments of meat. I've made pheasant risotto and even pheasant and bacon sausages in my time. But there's no doubt about it that eating pheasant is a bit different from eating chicken. These are basically wild birds and they are shot, not killed in an abattoir somewhere. And you don't necessarily get them oven-ready in plastic trays. I don't eat a great deal of meat but I am not a vegetarian and in all conscience, I think that if I am not a vegetarian I should face the reality of what that means. When the game season approaches, I feel it is time to gird myself for that. One year, a few years ago, a kind, local landowner offered me a couple of brace of pheasant from a shoot on his land, which I was delighted to accept. Especially as they hadn't been hung for too long because I don't like game that's too "high". Before handing them over, he looked at me and clearly thinking that I gave off feeble "townie vibes" offered to get them plucked and drawn for me. Feeling that to accept this was copping out, I thanked him but declined his offer and said I would do the job myself.

I came home with the four birds and laid them in their bright, iridescent plumage on the kitchen table. It was the Christmas holidays and H was at home. He came into the kitchen and I explained what I was going to do and suggested he might give me a hand. He took one look, went an interesting shade of pale green and disappeared faster than you could say "knife", let alone start wielding one. Left alone, the pheasants and I spent a long afternoon together .

Plucking poultry was not something I'd done before. Waitrose doesn't tend to sell its chicken breasts still "in feather". Two hours later and I had managed to pluck and draw one of the birds but still had three to go. It was messy, surprisingly hard work and about as earthy as it gets. I wasn't going to be beaten however, so I doggedly stuck at it, plucking and drawing another one in its entirety and skinning and jointing the remaining two until darkness fell and the kitchen looked like the aftermath of a particularly vicious pillow fight and I had four birds, more or less ready for the pot. I couldn't face cooking them immediately so they waited until the following day. It was a useful lesson in the realities of cooking and eating that I've never forgotten and it's made me much more selective about eating meat. I still do, and of course, I don't pluck and draw all that I cook, but I think about it more consciously and if I ever get to the point where I can't face the idea of doing it, I shall become a vegetarian.

If you are a proper countrywoman (which I am not) you take these things in your stride but if you're a more recent country-dweller, it's more of a challenge, I have to say.

Rather easier going was a little knitting project I came across a few weeks ago and which took altogether less stress to get "oven ready". Like to meet him? 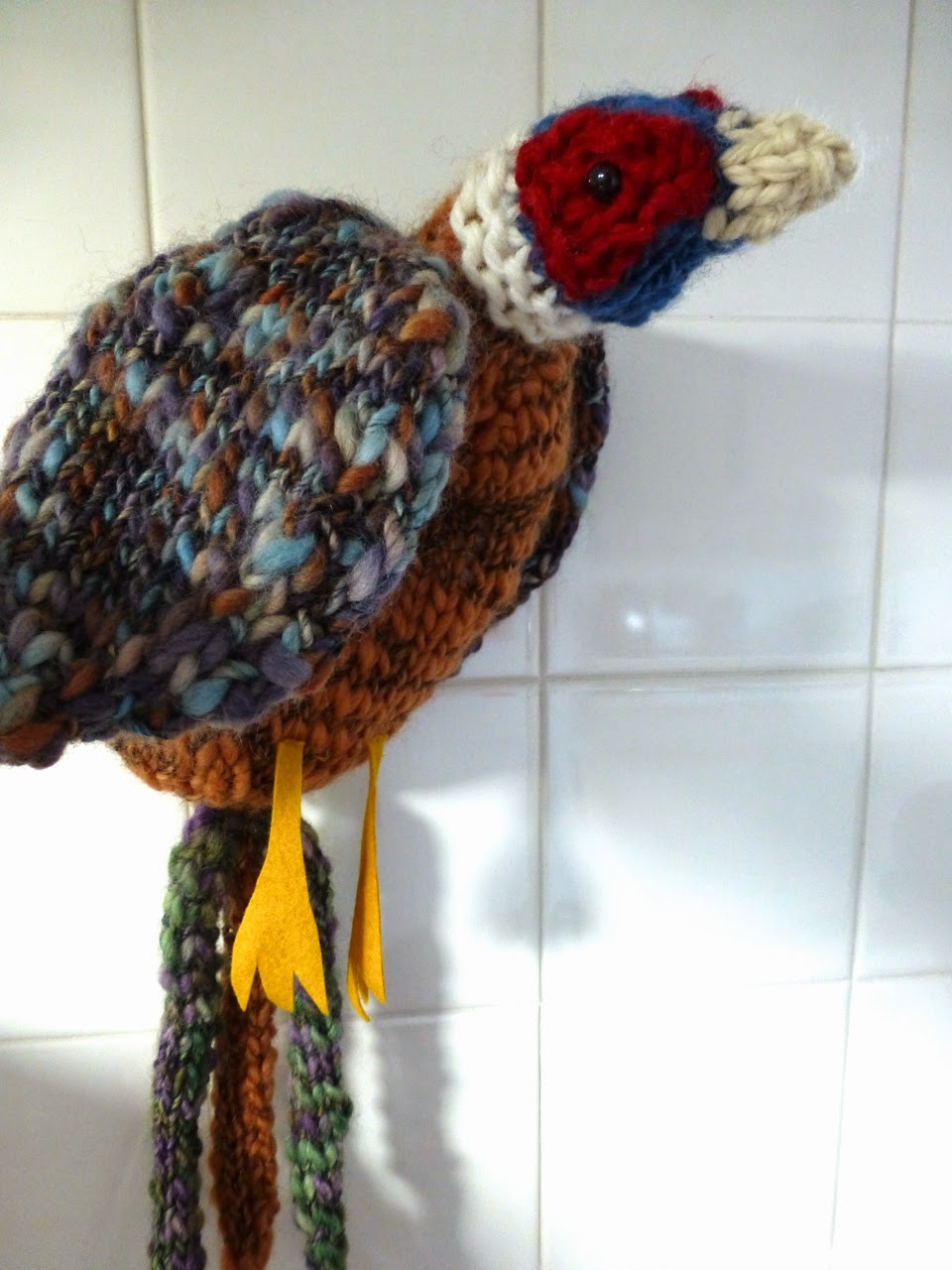 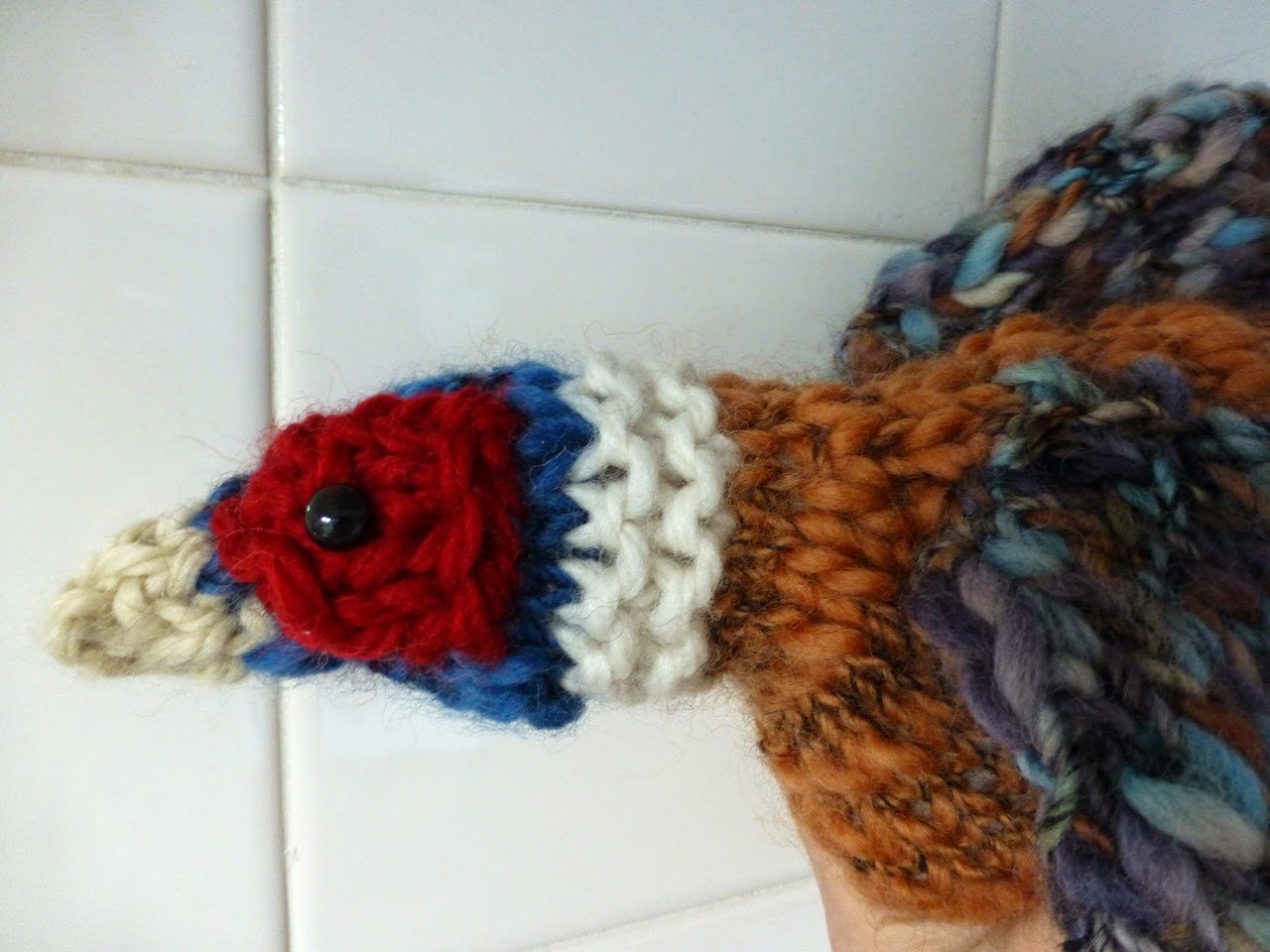 He comes from Louise Walker's book Faux Taxidermy Knits and I love him! You can also buy the pheasant pattern on its own here as a download. He knits up pretty quick - uses chunky wool and 9mm knitting needles - so if you fancy a poule / faisan au pot yourself it's not a big project. 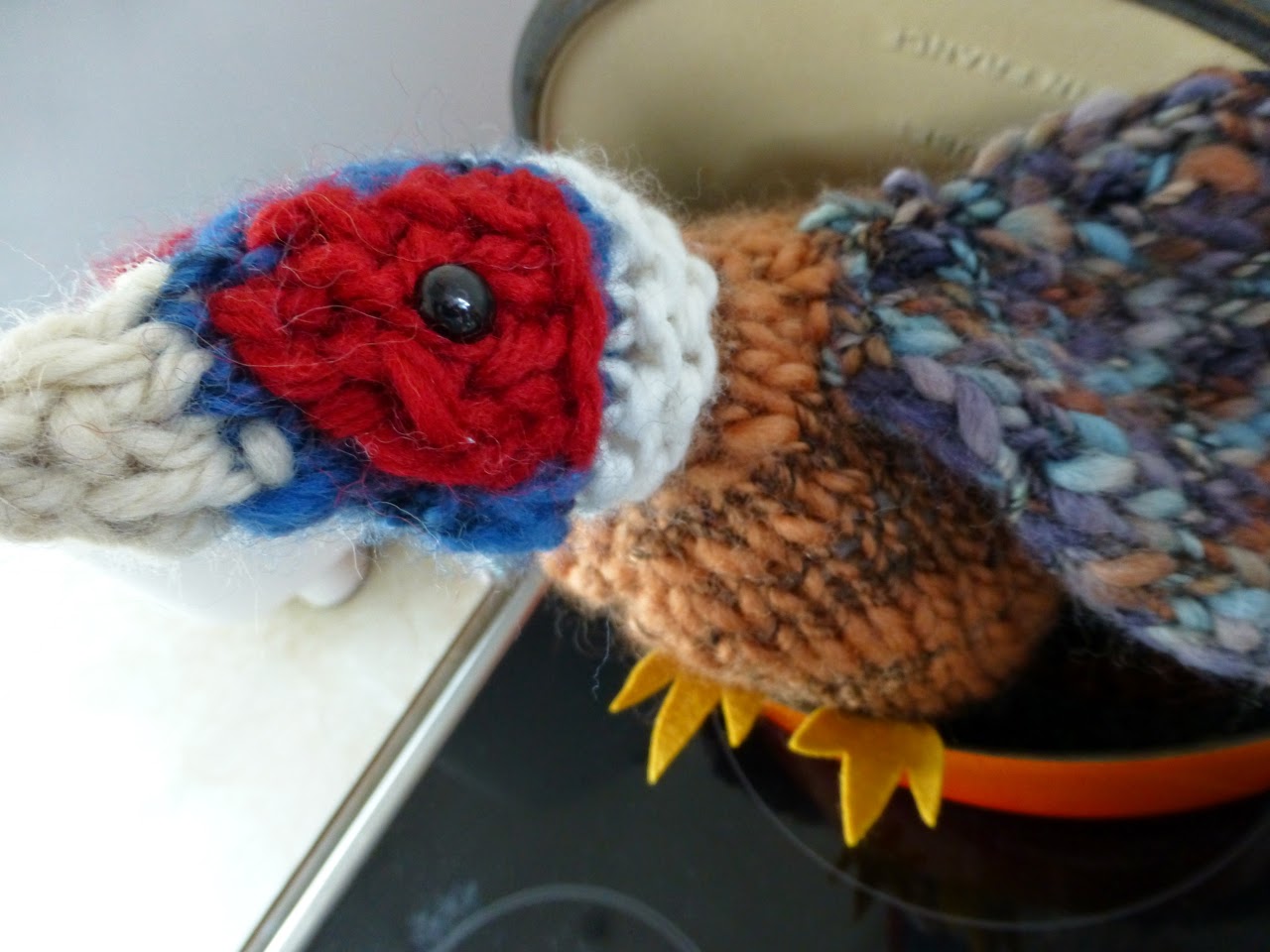 I love him extra much because he is entirely user-friendly - no plucking required and no giblets to face either! 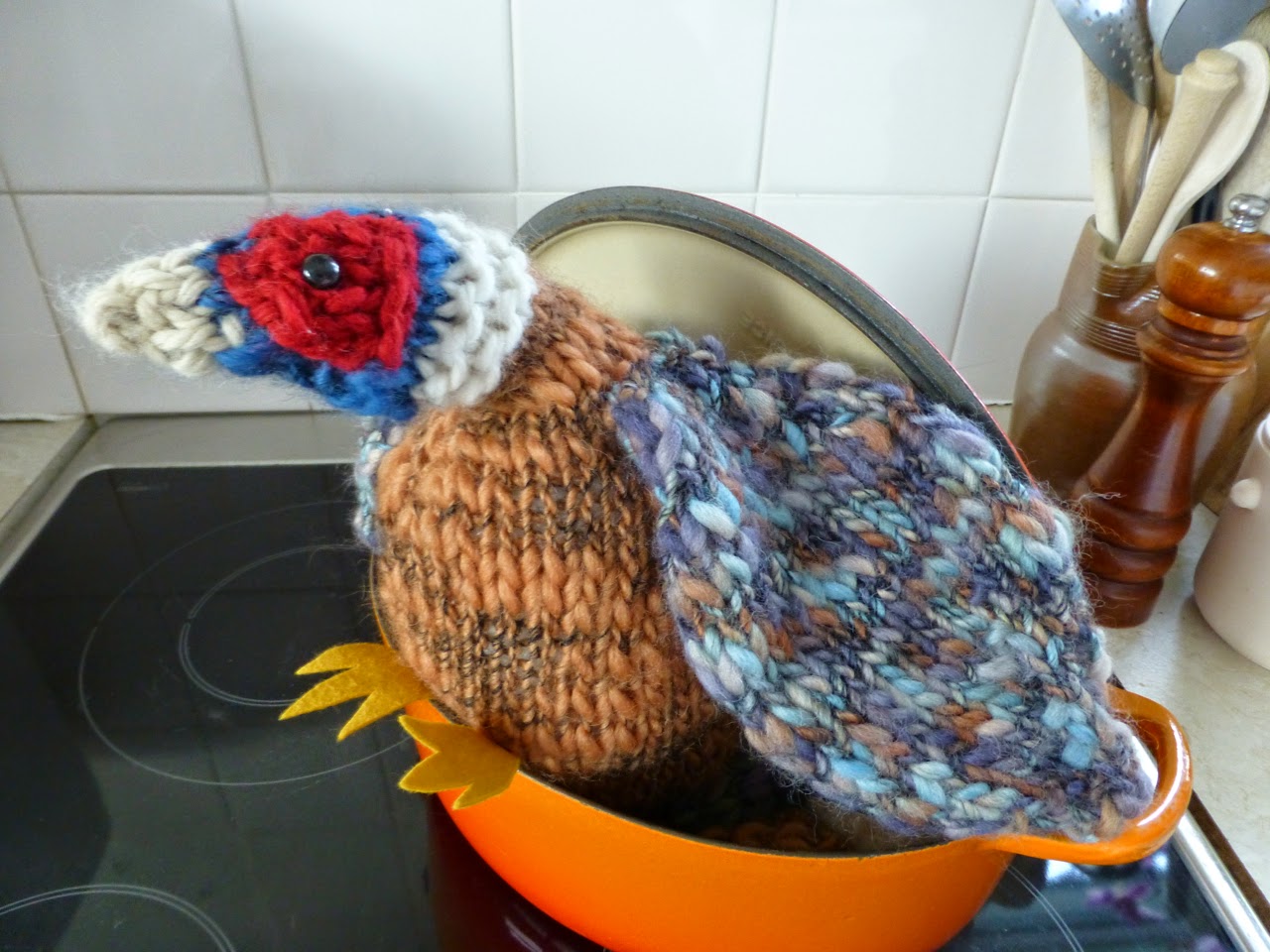 As you can see, he has decided to take up residence in one of my large Le Creuset casseroles for the time being. 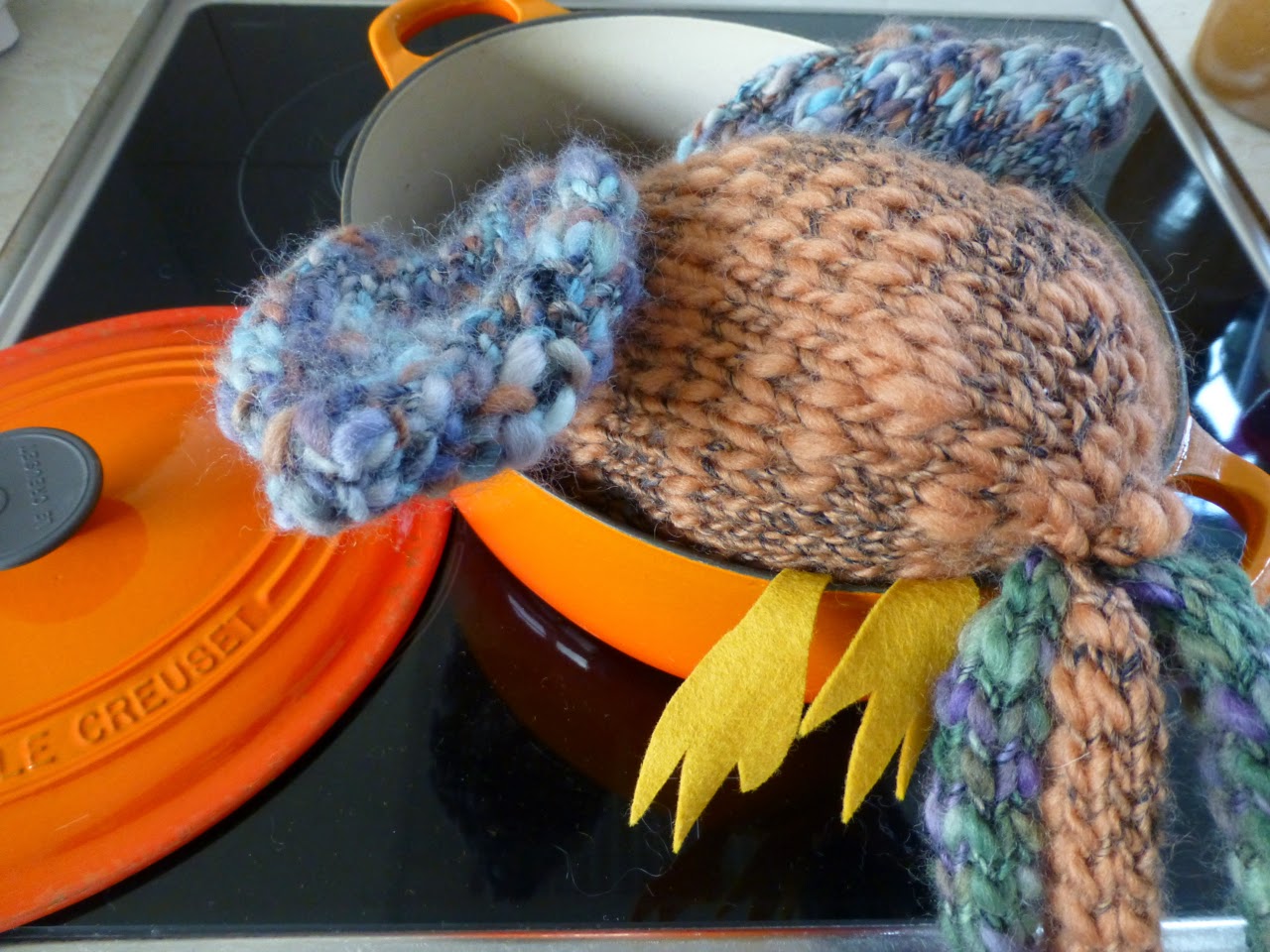 I think he's got wind of Saturday's pheasant shoot, on the estate down the road or may be he was listening to the news about bird 'flu on a duck farm in Yorkshire and has decided that keeping a low profile might be a good idea. Either way, he's hunkering down and not coming out in a hurry! 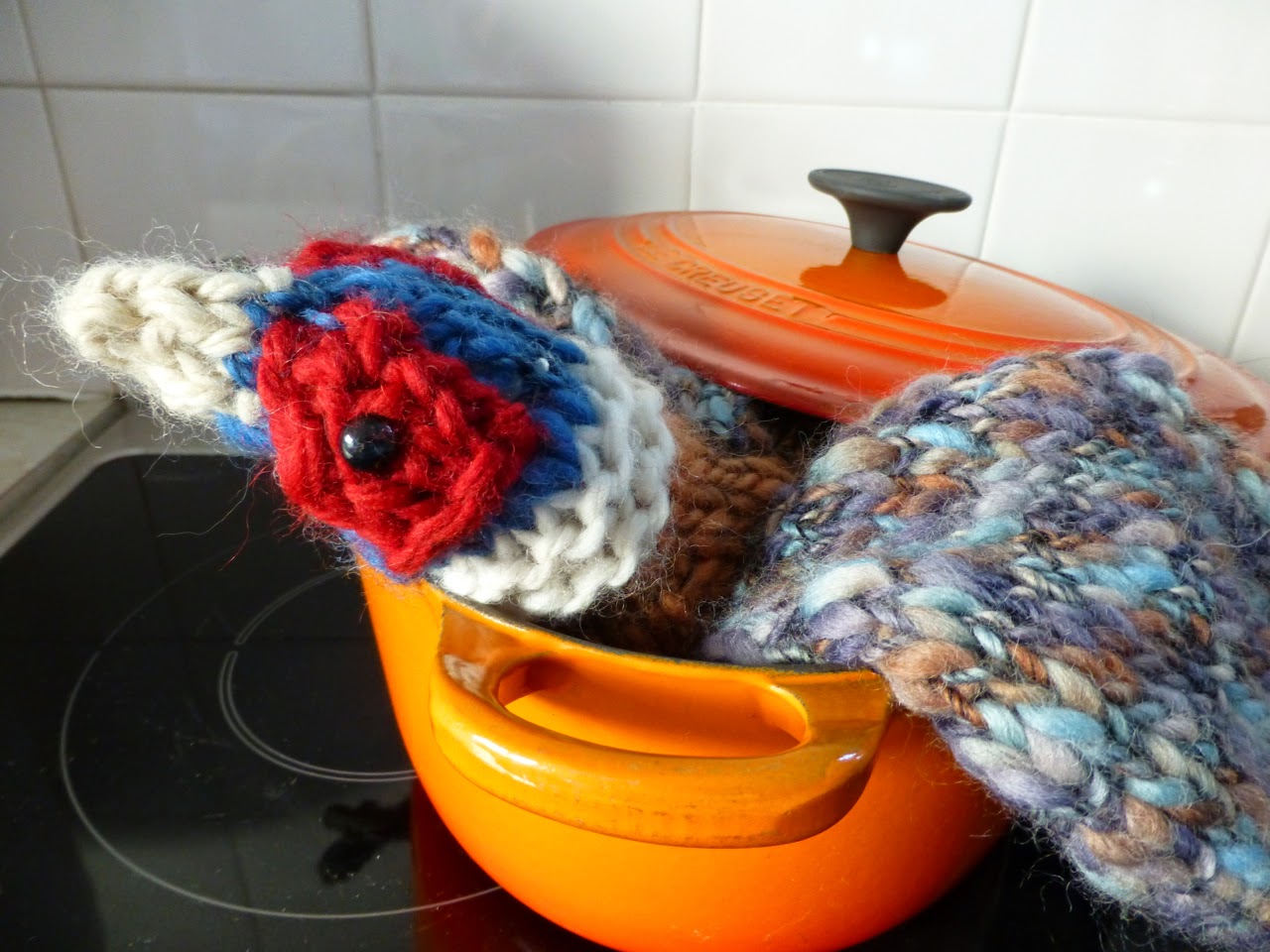 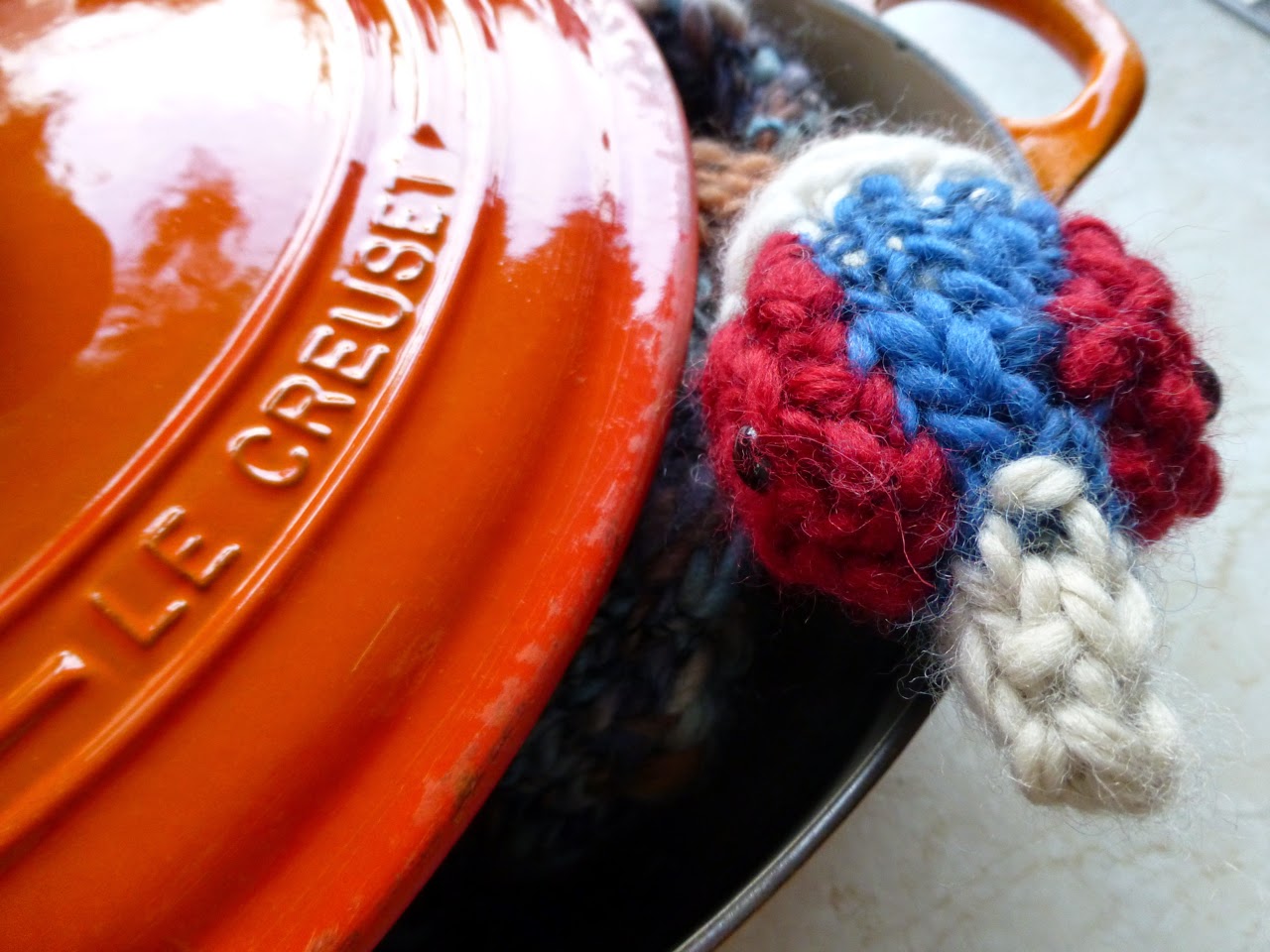 Which may be a problem if I want to cook a real poule au pot at the weekend! 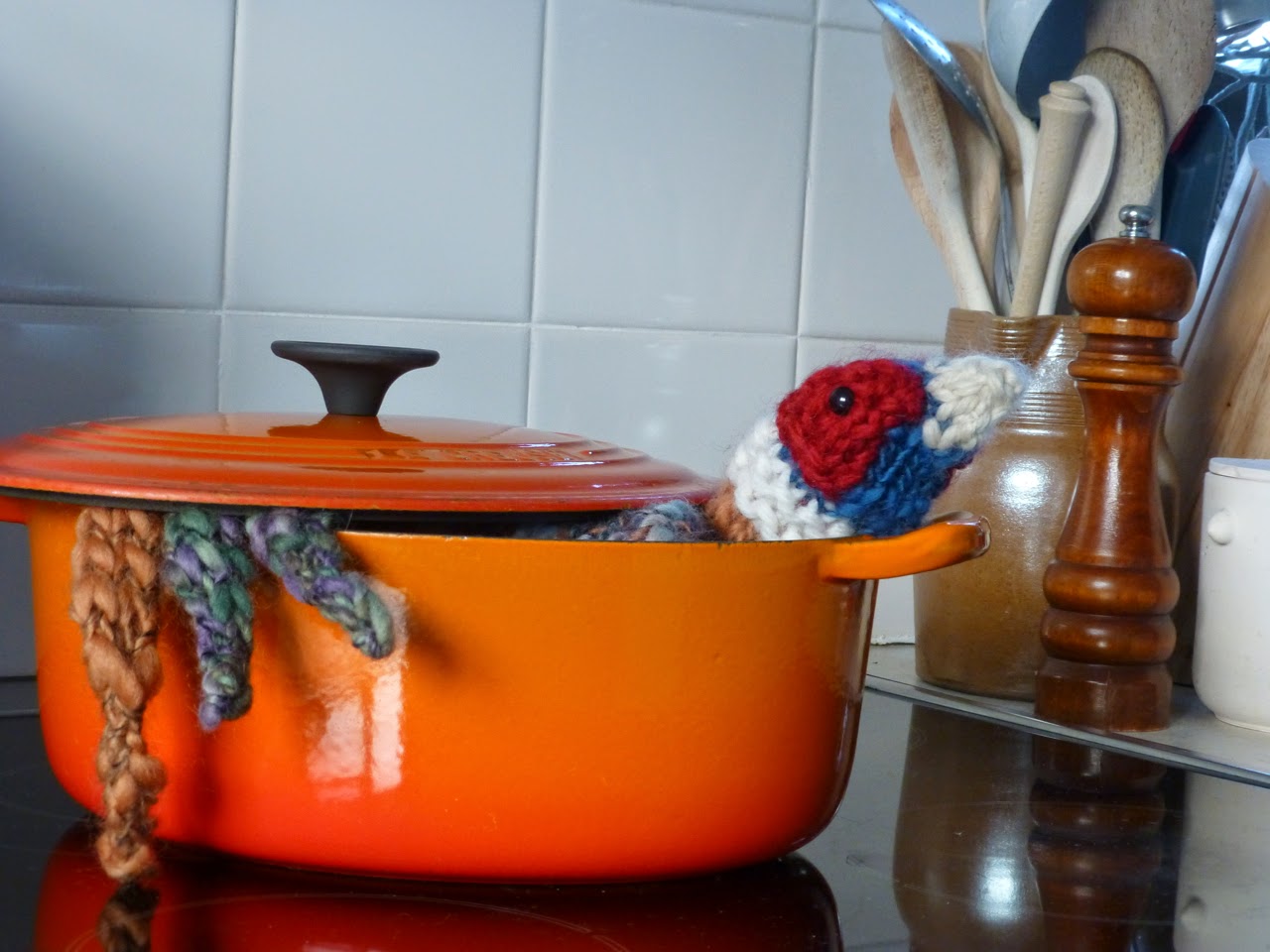 For the time being however he's making me and everyone else smile, without fail, on entering the kitchen, so I'm leaving him undisturbed!

And what's for supper, I hear you ask? I am chickening (sorry!) out and producing pasta with vegetarian tomato and red pepper sauce! Someone must move off the hob first though to avoid tomato sauce spattering his tail feathers!


Posted by Thomasina Tittlemouse at 16:56