Firstly, thank you so very much for all your kind knitting encouragement comments on my last post - I haven't given up on the knit-sticks and, in fact, I've been picking them up more often than a crochet hook over the past fortnight. Partly because I am knitting dish-cloths for a local charity project and partly because my short-wooden-handled, round knitting needles are air-travel-friendly and I have been away. H has been In Italy on a school classics trip and I have snatched a few days in Holland where I've never been but have always wanted to go because it's home to some of the best still life paintings in the world. Dutch painting in the 17th C is a virtuoso affair on many fronts - Rembrandt, Franz Hals, Rubens etc. but the still life genre is my all-time favourite and The Netherlands are still home to many of the best works of the best artists - Pieter de Hooch, Johannes Vermeer, Adriaan Coorte, Jan De Heem, Nicolaes Maes, Jan Van Huysum, Clara Peeters, Willem Claesz etc. The Rijksmuseum in Amsterdam, the Mauritshuis in Den Haag, and I am sure other museums too, hold still life treasures in almost every room. Fabulous. As in FaBuLouS!

There is a poignancy about many 17th C still lifes. Many are painted of intentionally ephemeral objects - flowers, fruit, bread, even discarded book covers and broken, old musical instrument cases. Short-lived butterflies, moths or other insects hover among the bright petals of a pink rose...


... or rest momentarily on the bloomy skin of a peach at the peak of ripeness.

Translucent grapes, red currants or gooseberries, taut with juice, tantalise us; perfect opportunities to demonstrate the virtuosity of the painter and a reminder that perfection does not last - tomorrow, perhaps even later today, these fruits will be past their best and beginning to go over.

You may well encounter other, more overt references to the inexorable passing of time in these paintings - the stark, unwelcome ugliness of a skull or an exquisitely complicated pocket-watch, open to reveal its intricate mechanism, housed in a gold case.

You do not need to see the watch-face, half-hidden in the folds of blue, silk ribbon from which the wearer suspended the piece in his pocket, to know what time it is telling. The painted mechanism is soundless in all its detail and yet ticks loudly across the silence of the intervening centuries. Now is what we have. Make the most of it. As Heraclitus, the ancient Greek philosopher put it, "Everything is in flux." "Nothing stands still." Life doesn't; we don't.

As I get older, I find this harder to accommodate - there are lots of ways I would like time not to move on but to stand quite still, so although I love these paintings almost more than any other genre of art, I find some of them quite emotionally disturbing.

The genre was all the rage in Holland in the 17th C and provided artists with perfect canvases (forgive the pun!) to showcase their ability to paint intricate objects and, above all, to paint light - light reflected off a polished, metal dish or caressing a chased, silver cup; light lingering on a scratched and worn pewter plate or dancing in the depths of a wine-glass, half filled with pale, white wine; light playing in the water around the stalks of flowers in a blue glass vase or catching the raised swirls on the belly of a slender-spouted, glass jug; light bouncing from the bobbles that decorate the wide stems of many 17th C wine glasses.

Many of these paintings feature expensive objects - elaborate silver or pewter-ware, perilously thin, gilded glasses and jugs, fine table linen - beautiful things making beautiful paintings. My favourite paintings of all are those that are slightly less grand. Look at this painting of bread and cheeses by Clara Peeters, for example, with figs, dates and almonds in a Delft-ware dish. Although the slender-stemmed, glass goblet is expensively fine, the glazed, pottery wine-jug and blue and white dish that rest on the table, whose edge is badly chipped, are more homely. I especially love the way the rough-hewn cuts in the cheese are painted and the marks on the bread roll where it has been separated from the batch in which it was baked. These things too, are poignant - the simple meal is immortalised here in Clara Peeter's outstanding brushwork and through her perceptive eyes but the eater - where is he or she? Who was he or she? Clara Peeters herself - where and who is she? Women painters were highly unusual in the 17th C - I found myself intrigued by how she came to paint at all, let alone masterpieces like this and wondering what her life might have been like, as well as dearly wishing to lift one of those shavings of cheese off the plate and taste it, along with one of the dried figs or dates or a milky almond.

And alongside that wish, is the wish to look at what is not painted, but real, and to taste that too in the way that one might savour the crystalline sharpness of a sliver of mature cheese or the stickiness of a few dried dates. Now is what we have. I must make the most of it.

Anyway, deeper reflection aside, if you've never been to Amsterdam, I recommend it - go and steep yourself in art - the Van Gogh Museum as well as the Rijksmuseum; take a train from "Amsterdam Centraal" to Den Haag to visit the Mauritshuis; and in between, wander beside the "grachten" (canals) in the autumn sunlight; 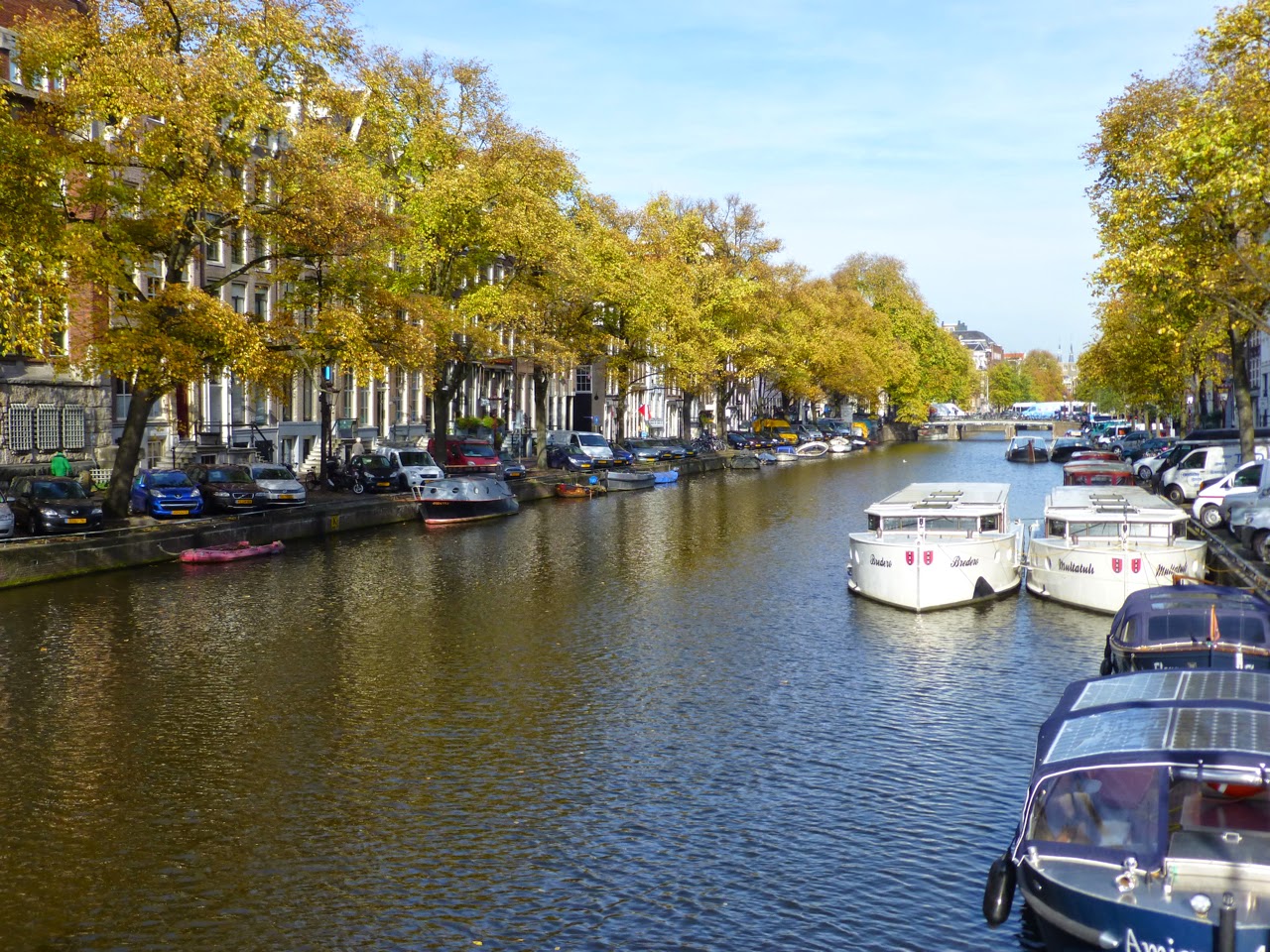 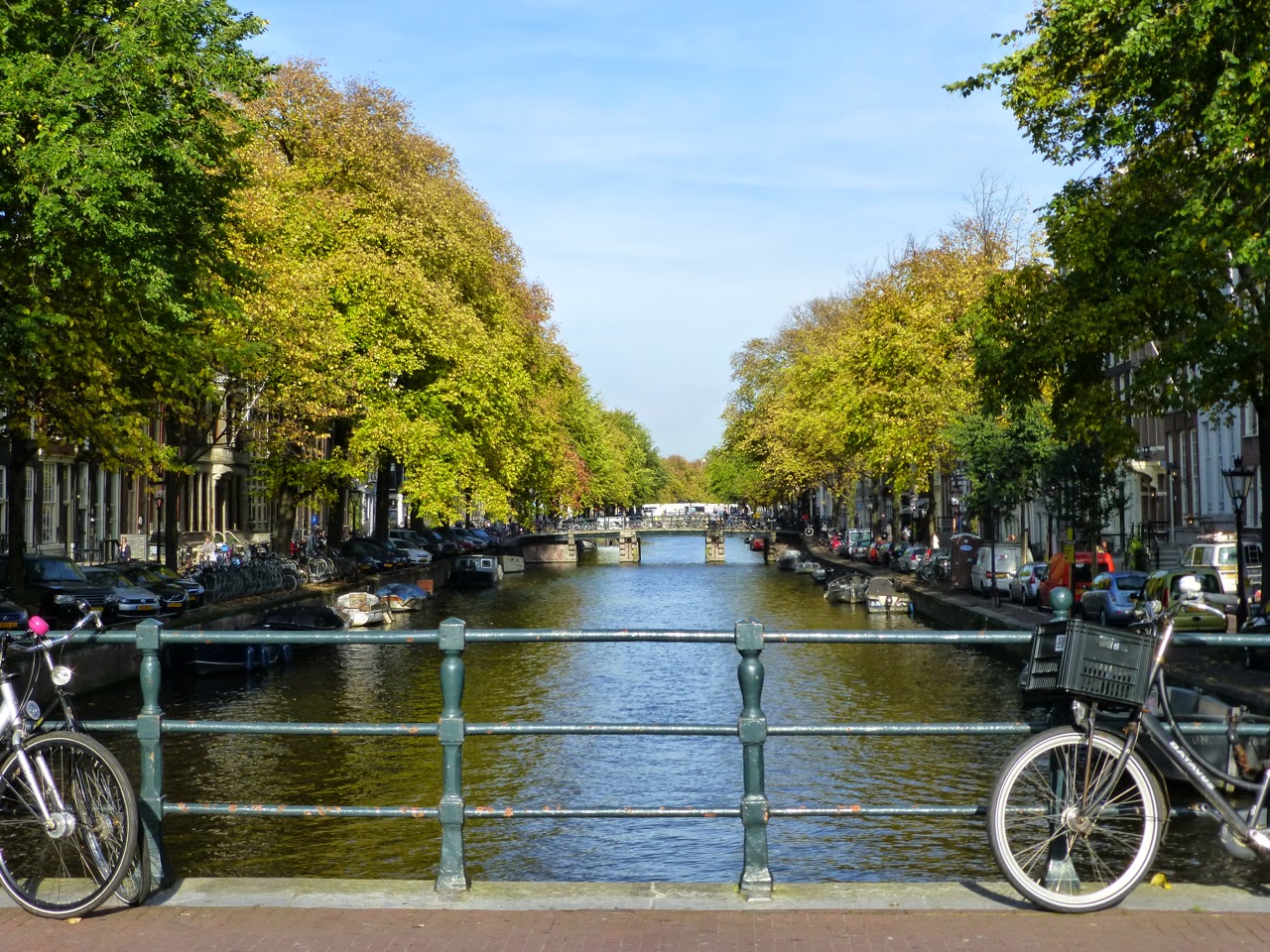 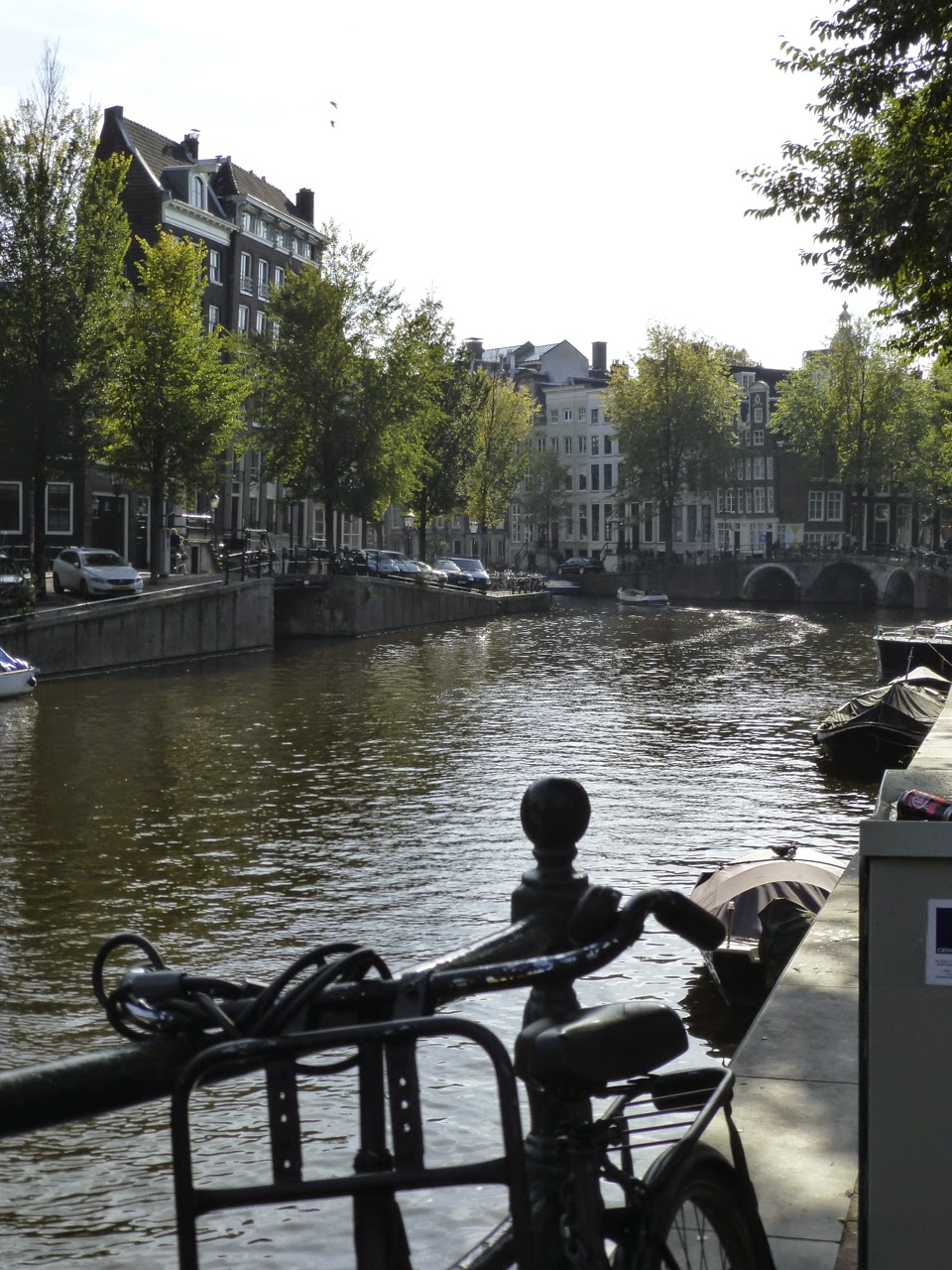 travel on a tram (very user-friendly, even for nervous bus-users like Mrs T) ... 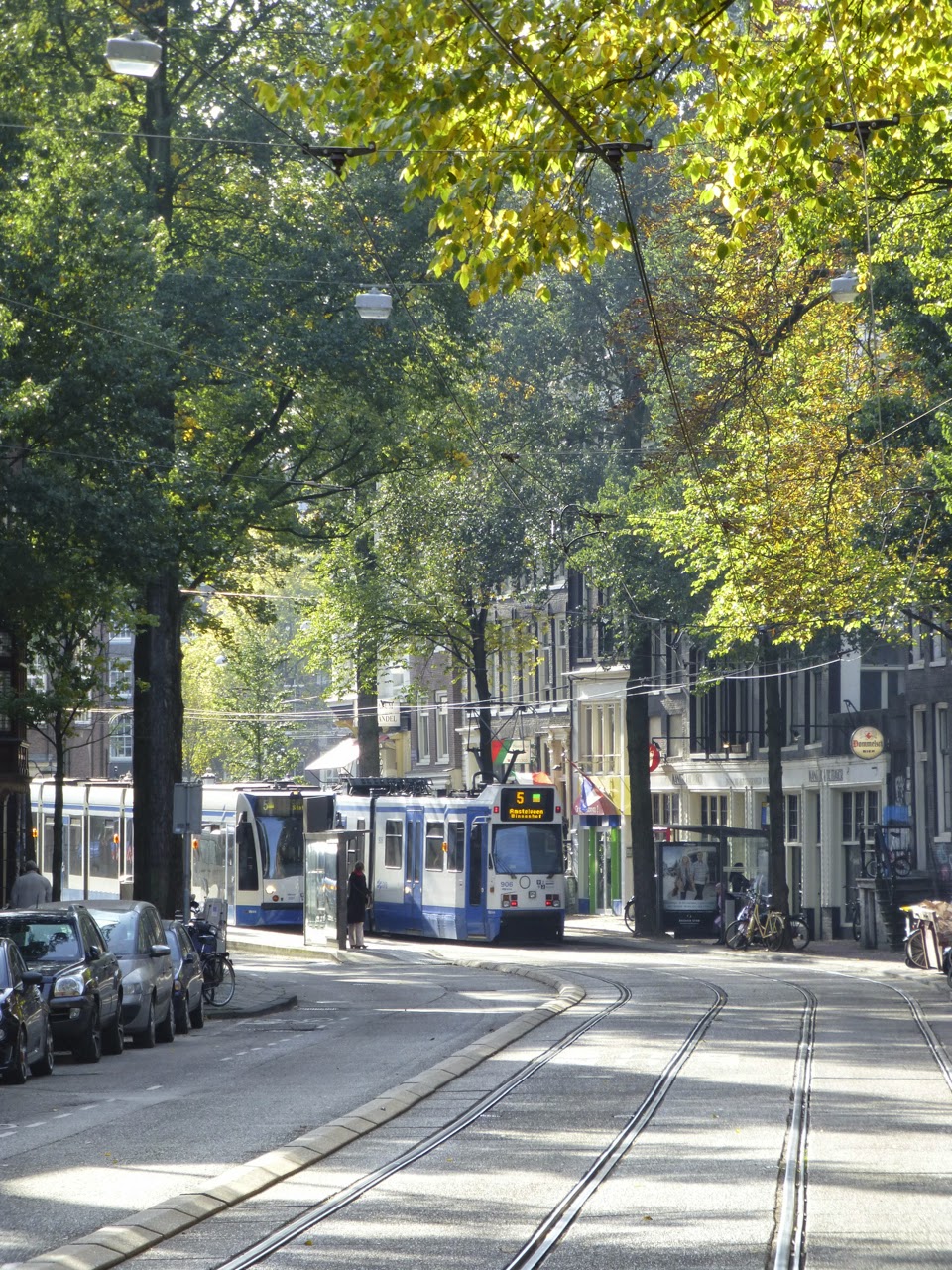 ... or may be hire a bicycle and join the Amsterdamers who all seem to travel on two wheels for preference. 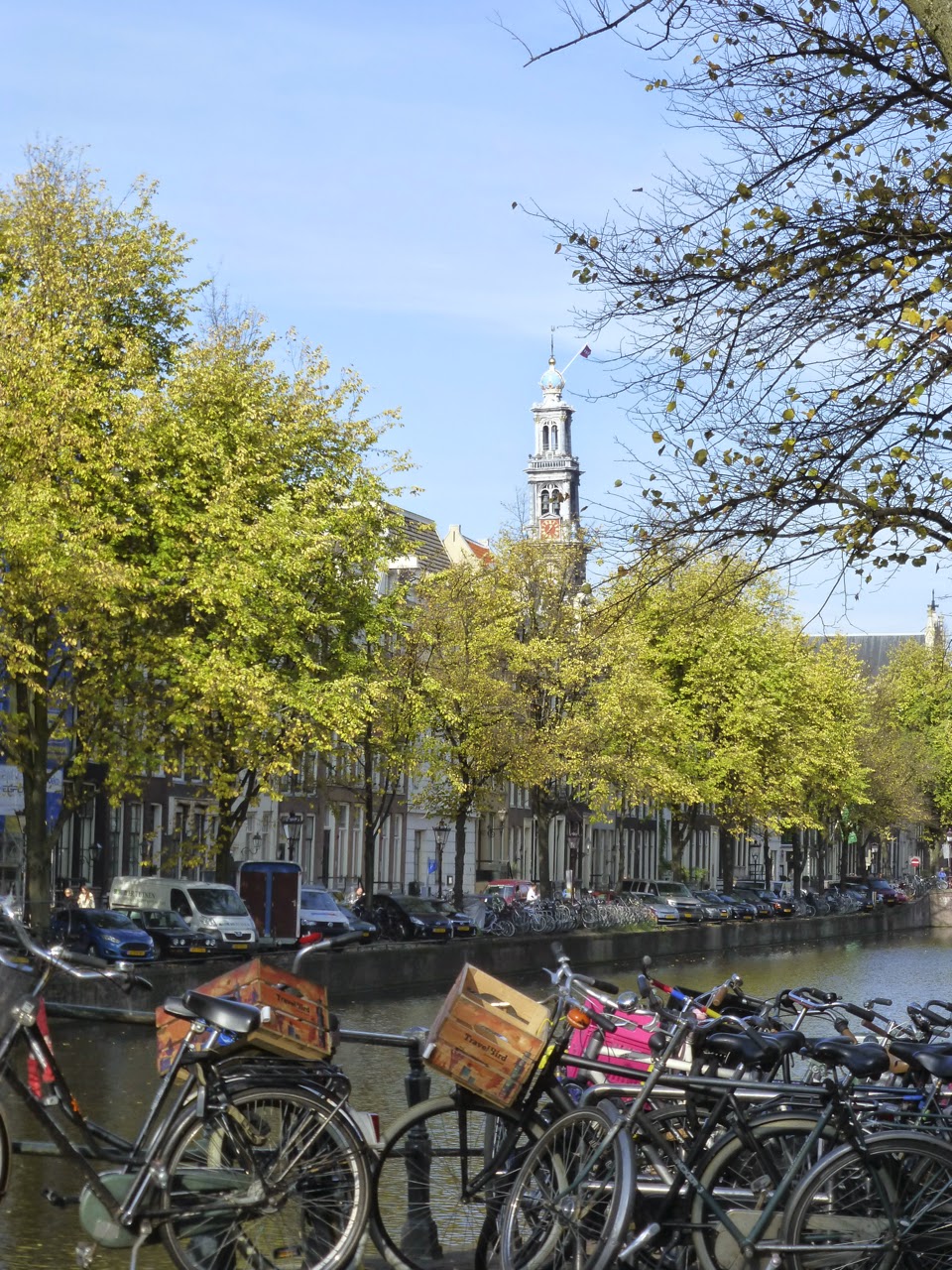 Enjoy the characterful canal houses and the enchanting little plaques which originally identified each house in a street, in the way that today we use numbers or names. 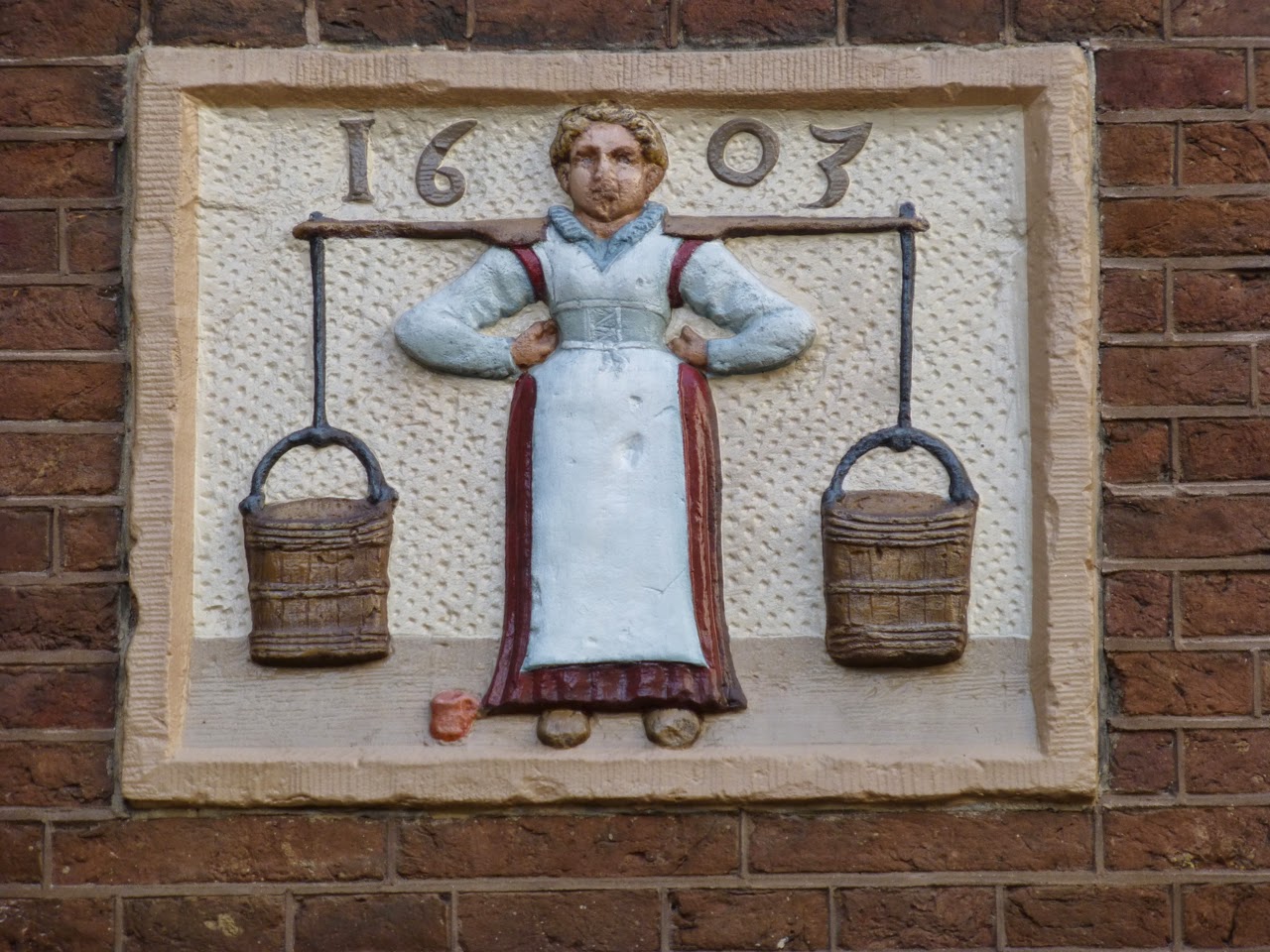 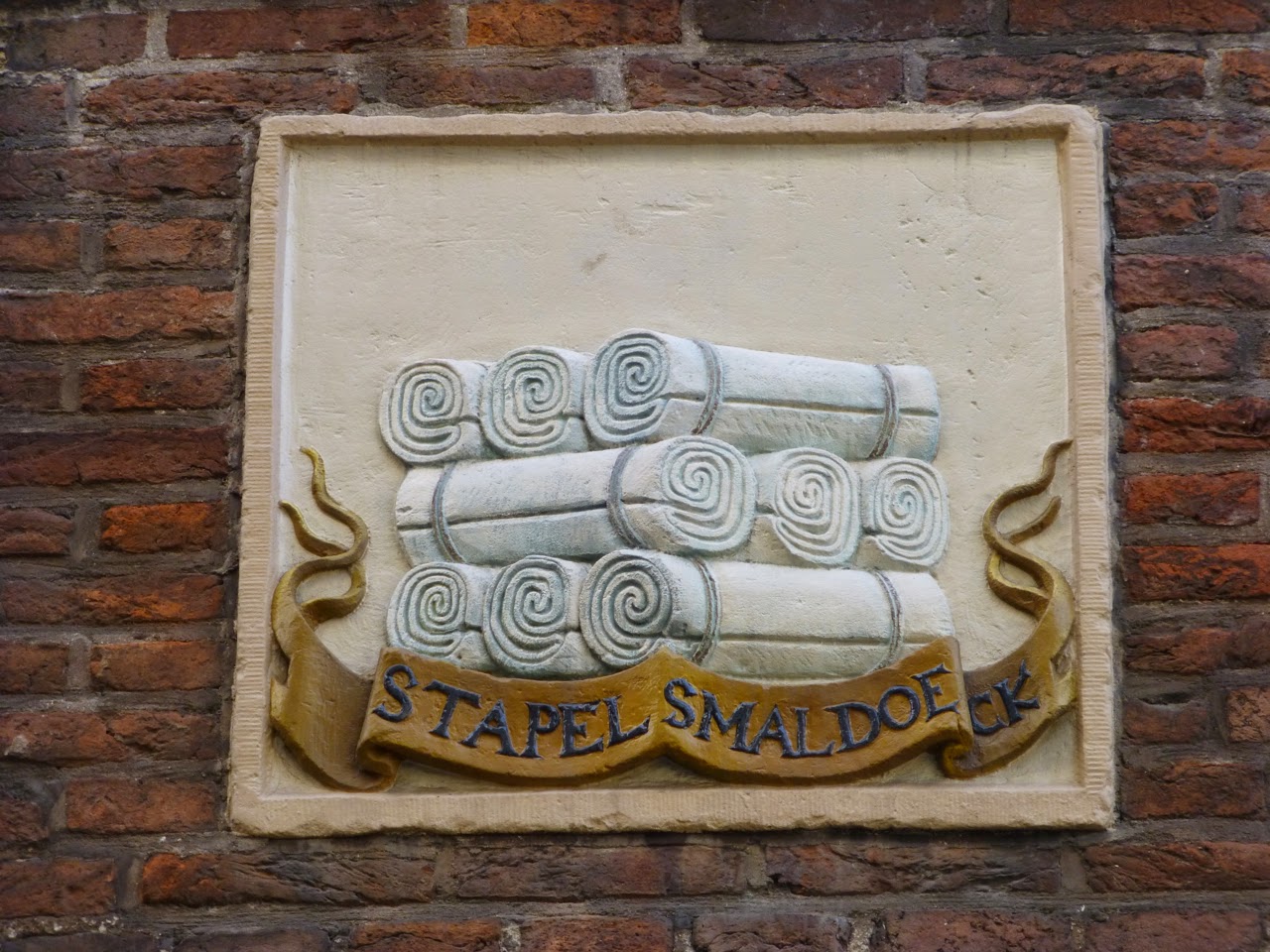 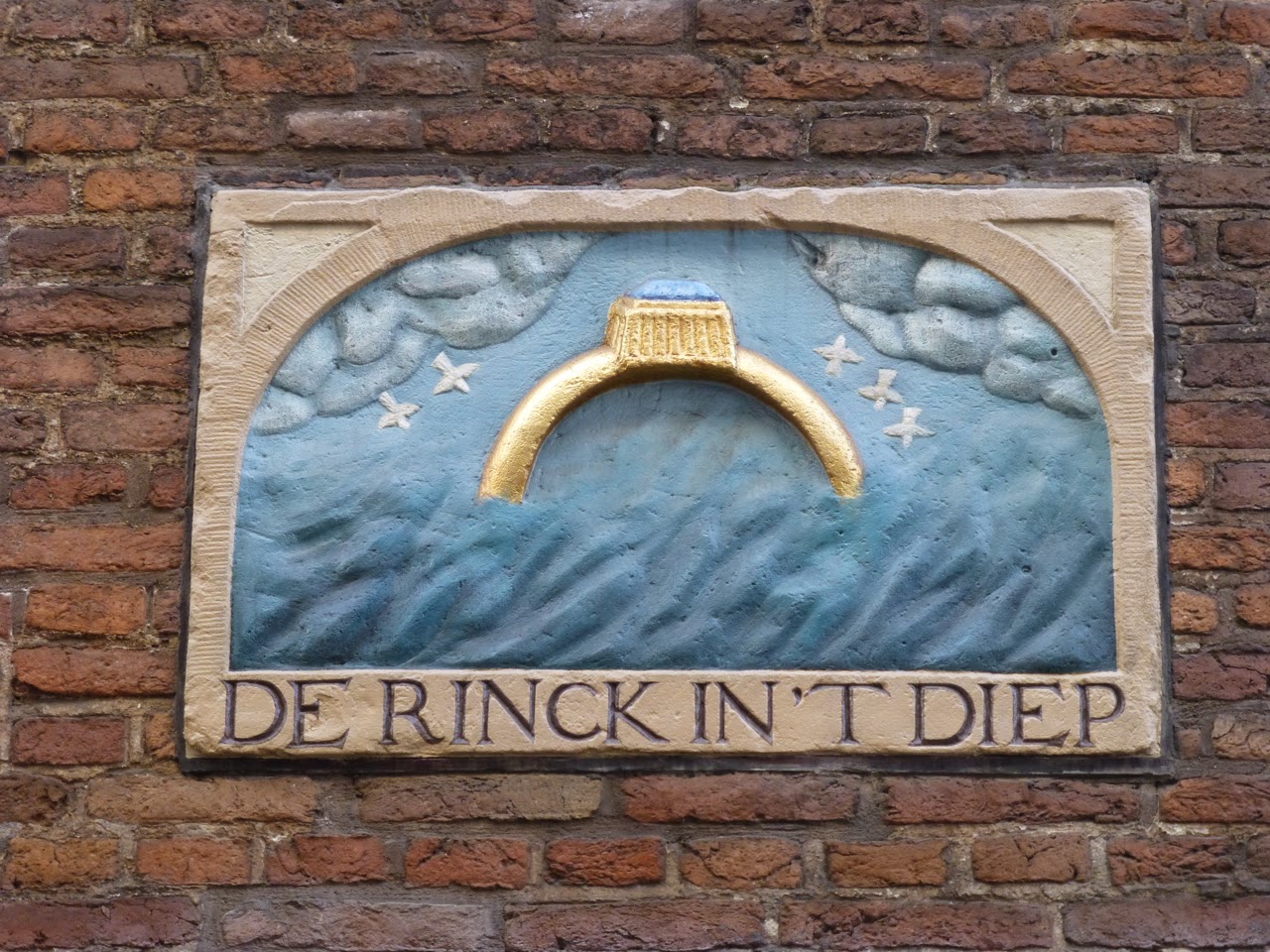 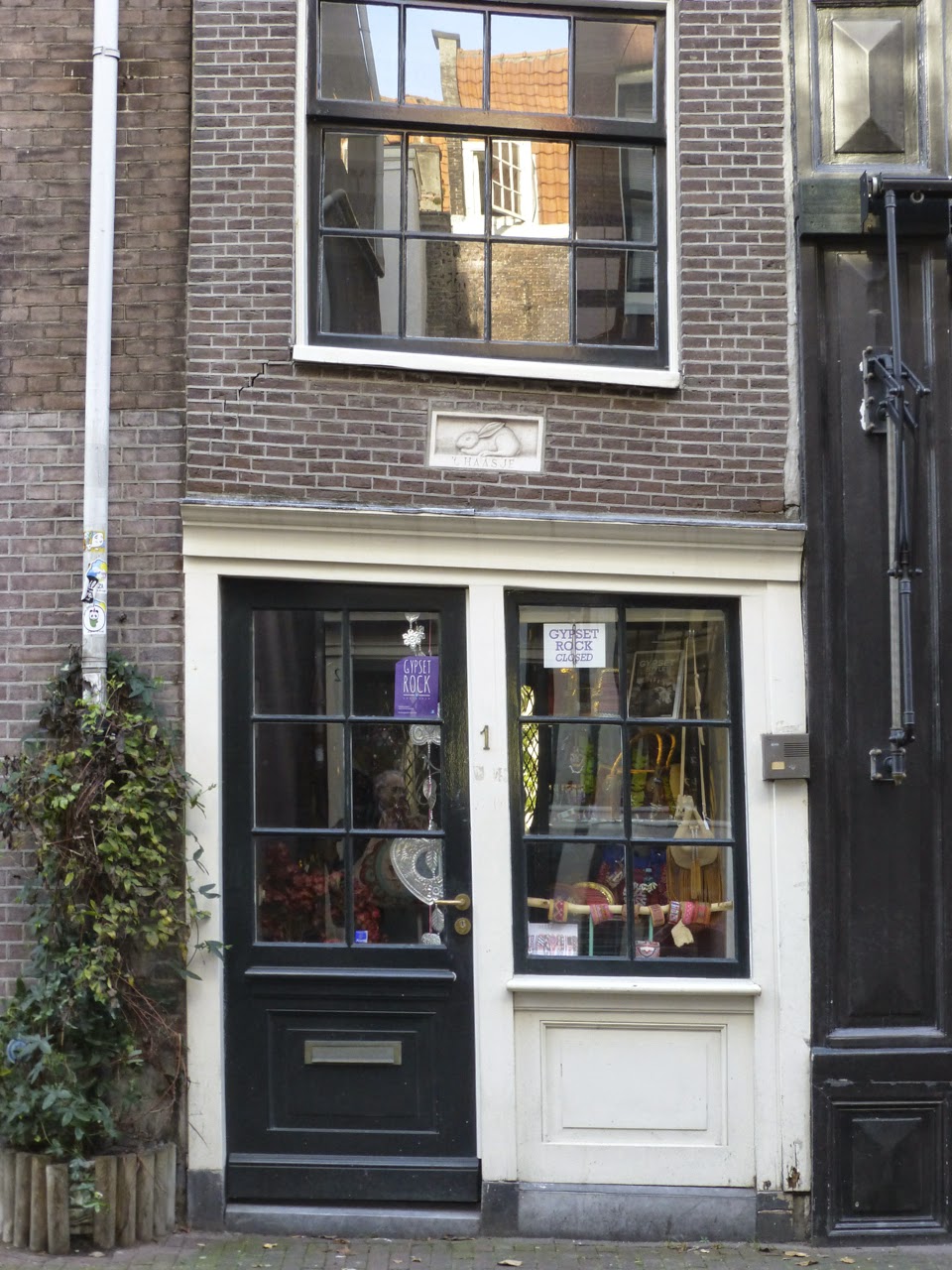 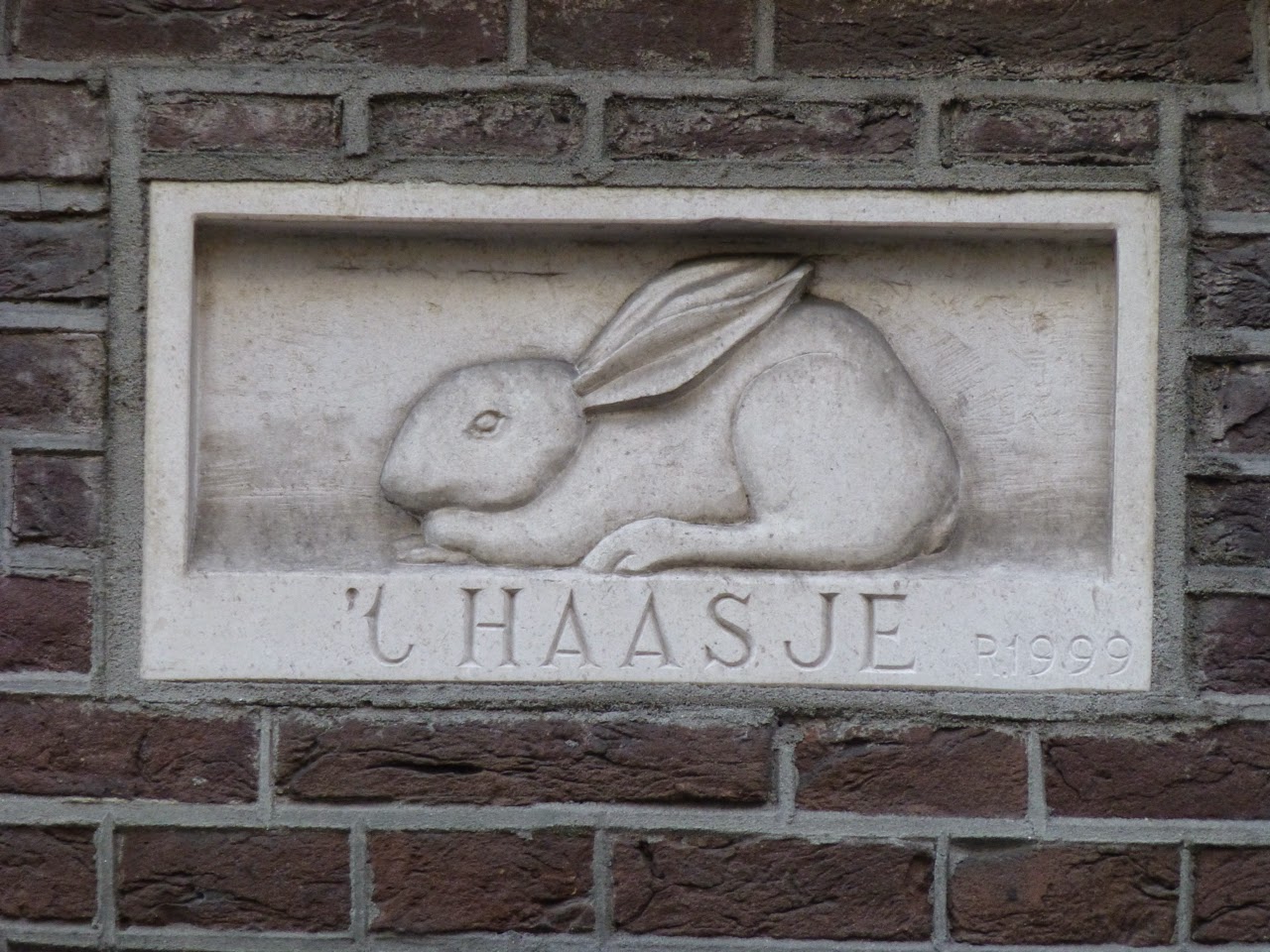 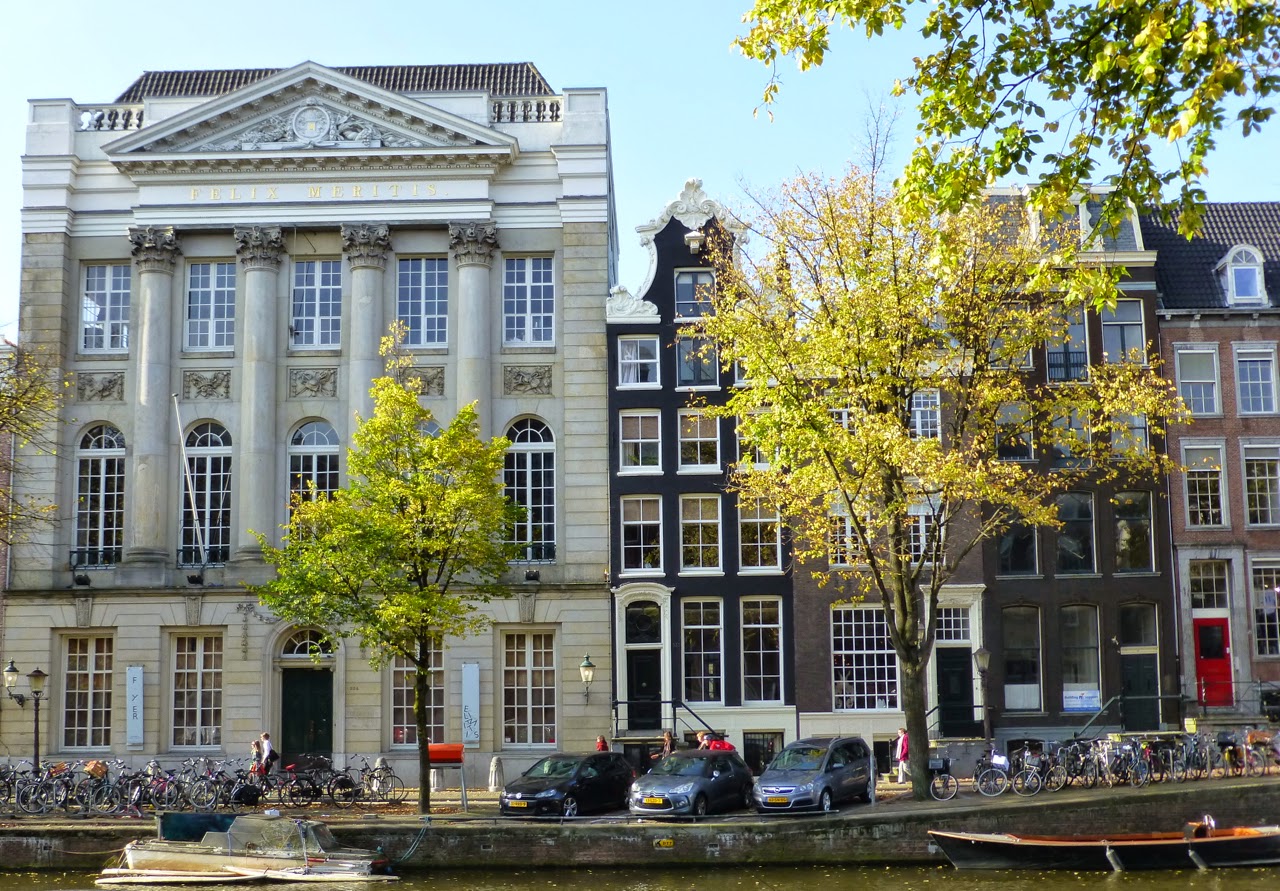 Sample the local speciality of "jenever" a distilled spirit that is a bit like gin, flavoured (as gin is) with juniper and other aromatics but with a character all its own. 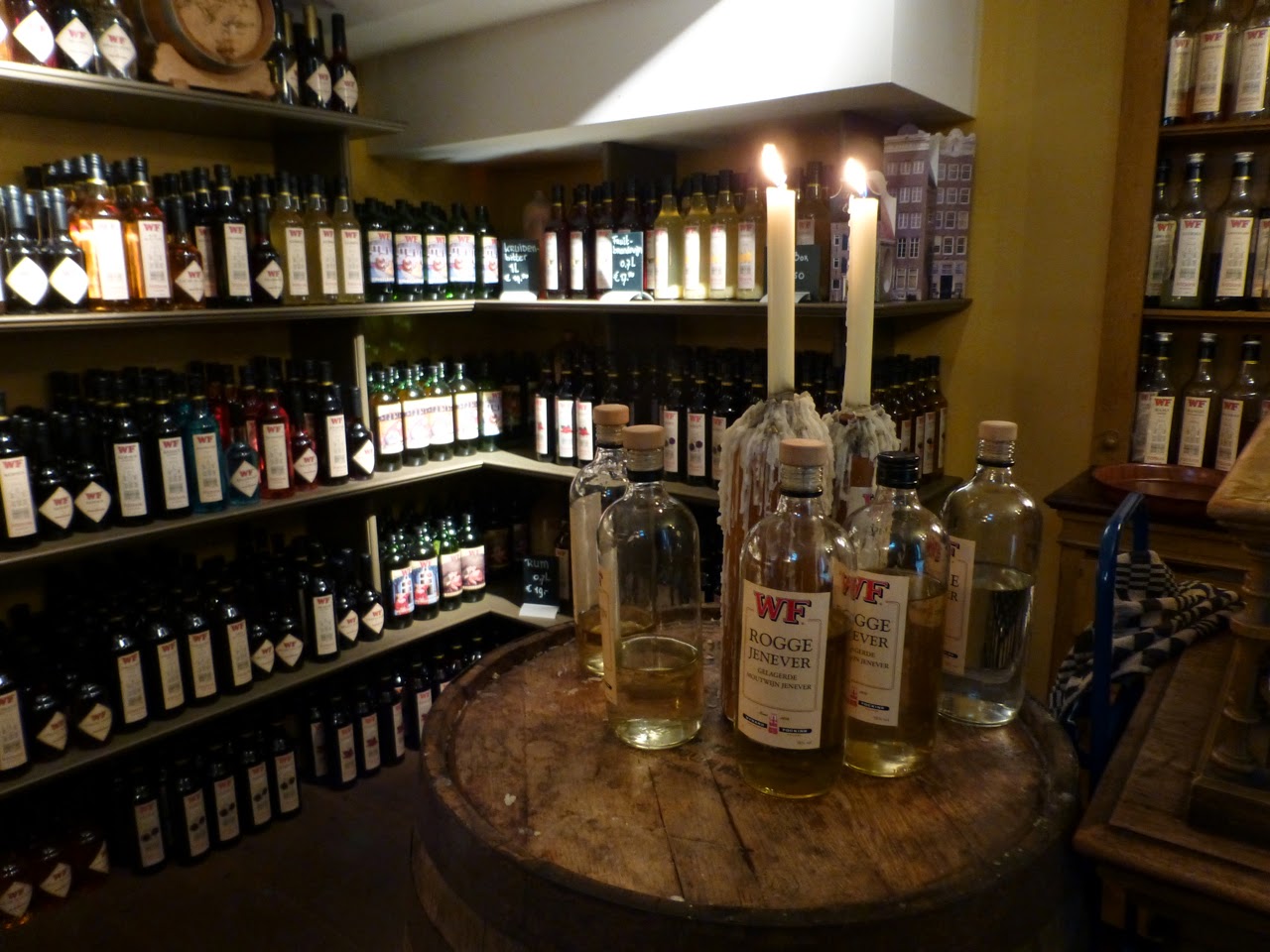 I don't drink spirits much, especially neat, but visiting the ancient distillery "Wynand Fockink" established in 1679 in the heart of Amsterdam is an experience all its own. Go easy on the "Oude Jenever" (Old Jenever) even if just tasting a tiny amount - it's nearly 50% proof! 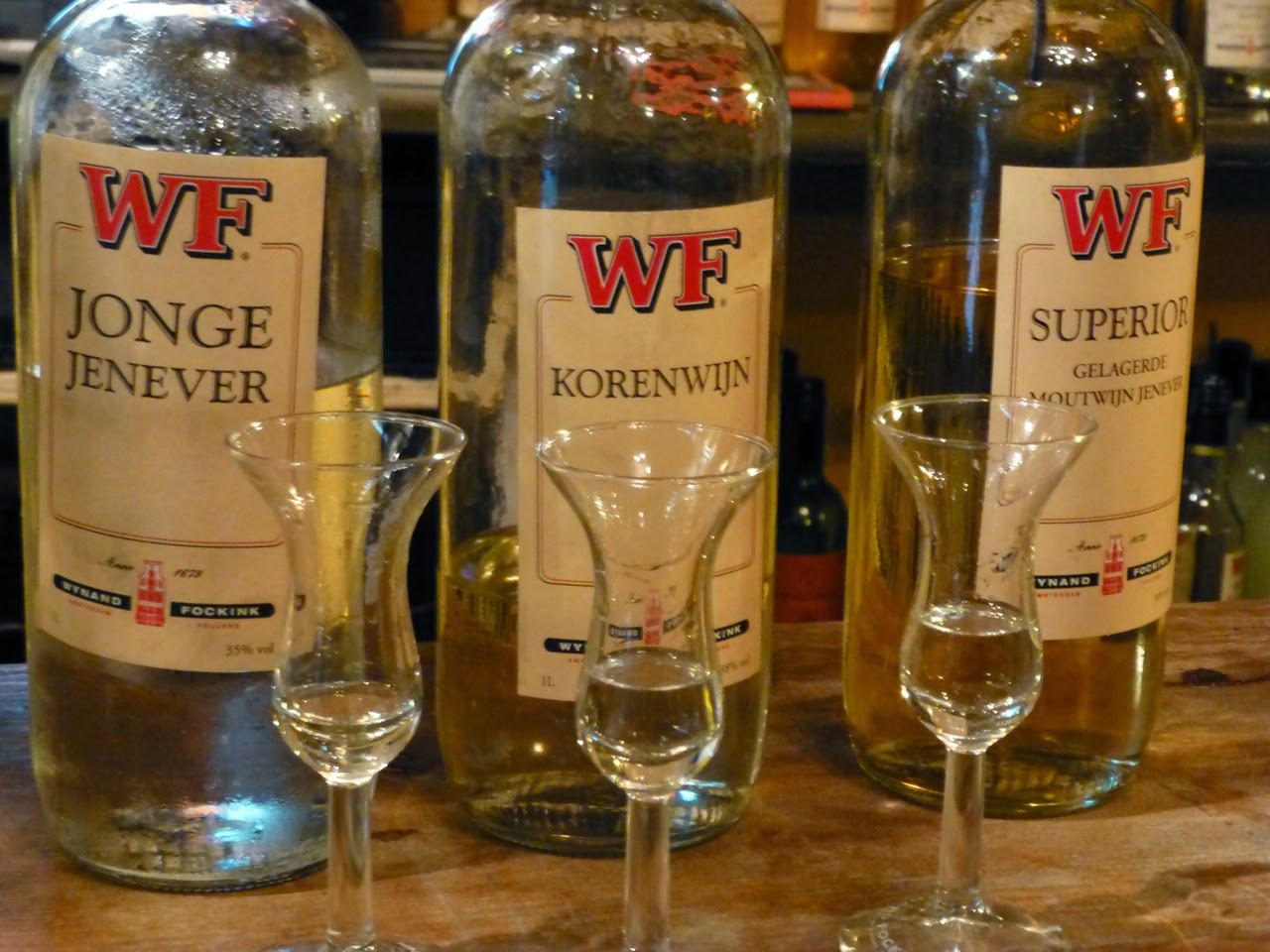 Have a wander through "de negen straatjes" - "the nine streets" - that criss-cross the three main canals running parallel to the Singel, for delightful shopping and eating - Dutch baking is full of the heritage of the Dutch East India Company - think cinnamon, nutmeg, cloves, cocoa - and the Dutch make soup and sourdough bread to die for as well as fabulous chocolate. 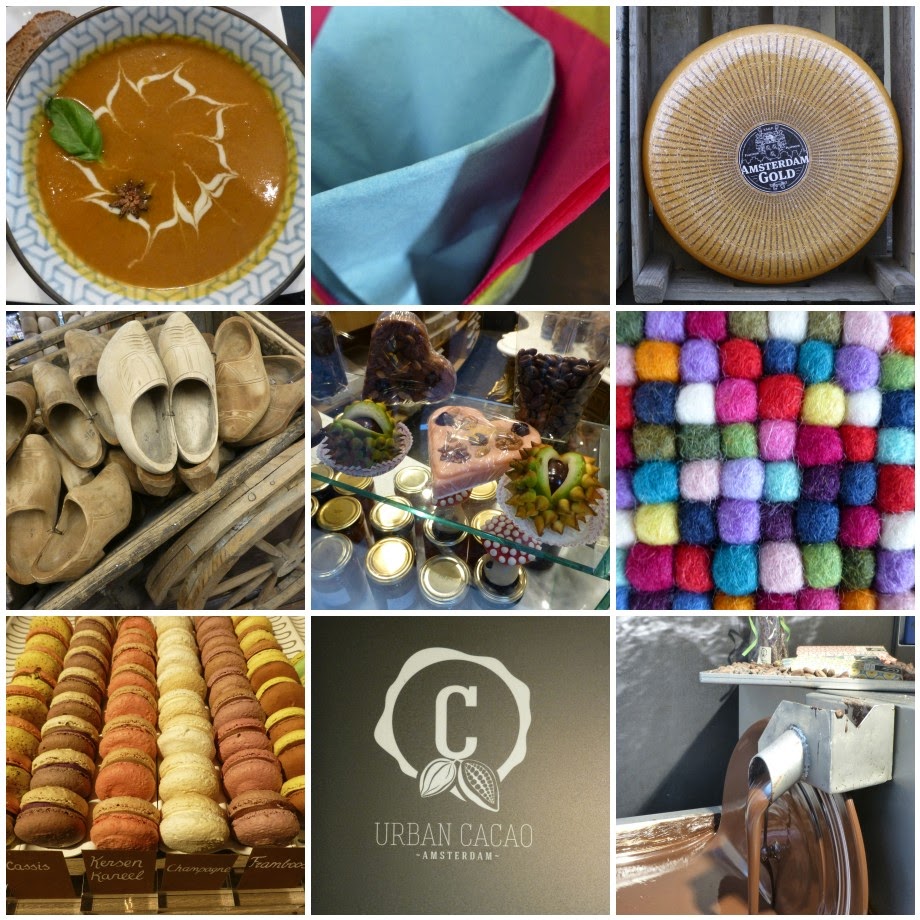 And as a souvenir, buy yourself a bunch of painted wooden tulips to cheer up dark autumn days back home - not as beautiful as real tulips, of course, but less ephemeral and that just now suits me wanting to still life down a bit. 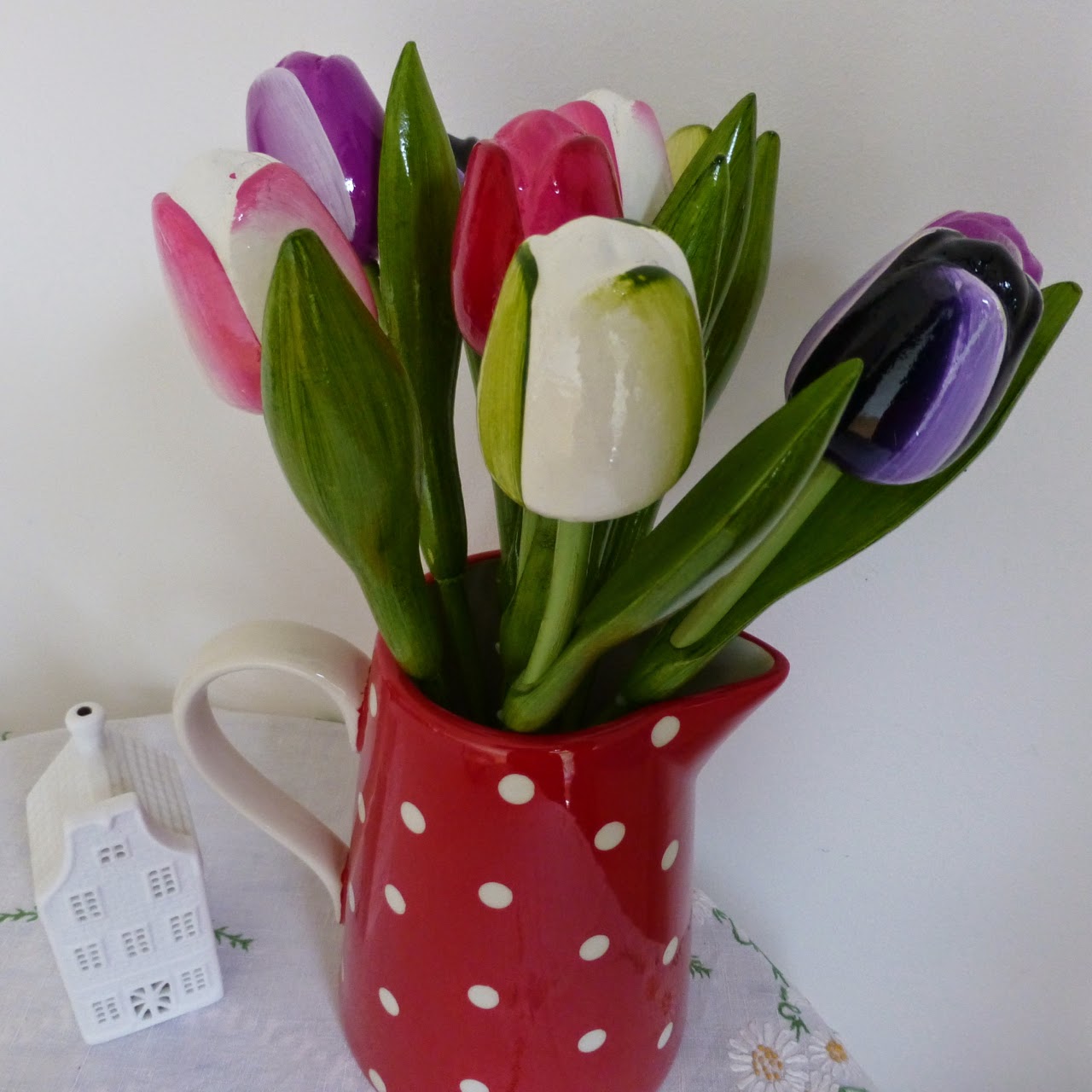 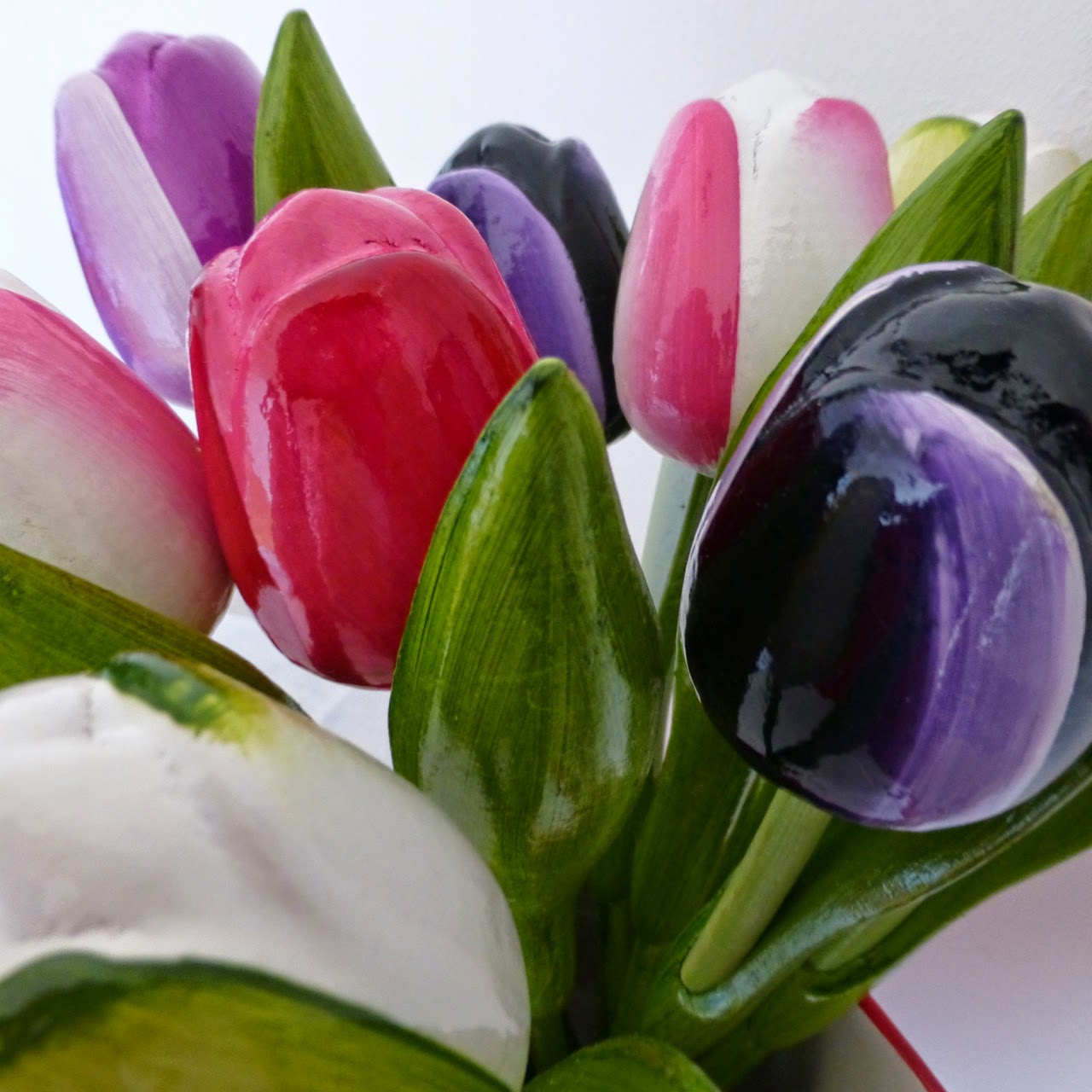 Along with my wooden tulips, I am savouring life's still moments, as and when they offer themselves, with my new little porcelain Amsterdam canal house. It houses a nightlight and shines comfortingly and unblinkingly from its tiny windows in the autumn gloaming, while I take time out to sip Dutch-style  peppermint tea, brewed with fresh leaves in a glass - you get it like this everywhere in Holland it seems, even at airport cafés, which is pretty civilised, I think. Not  a "still life" in the way that the beautiful paintings I've talked about above are, but life stilled just for a moment with echoes of wanting to appreciate something of the same beauty inherent in transient, domestic things, however fleetingly. 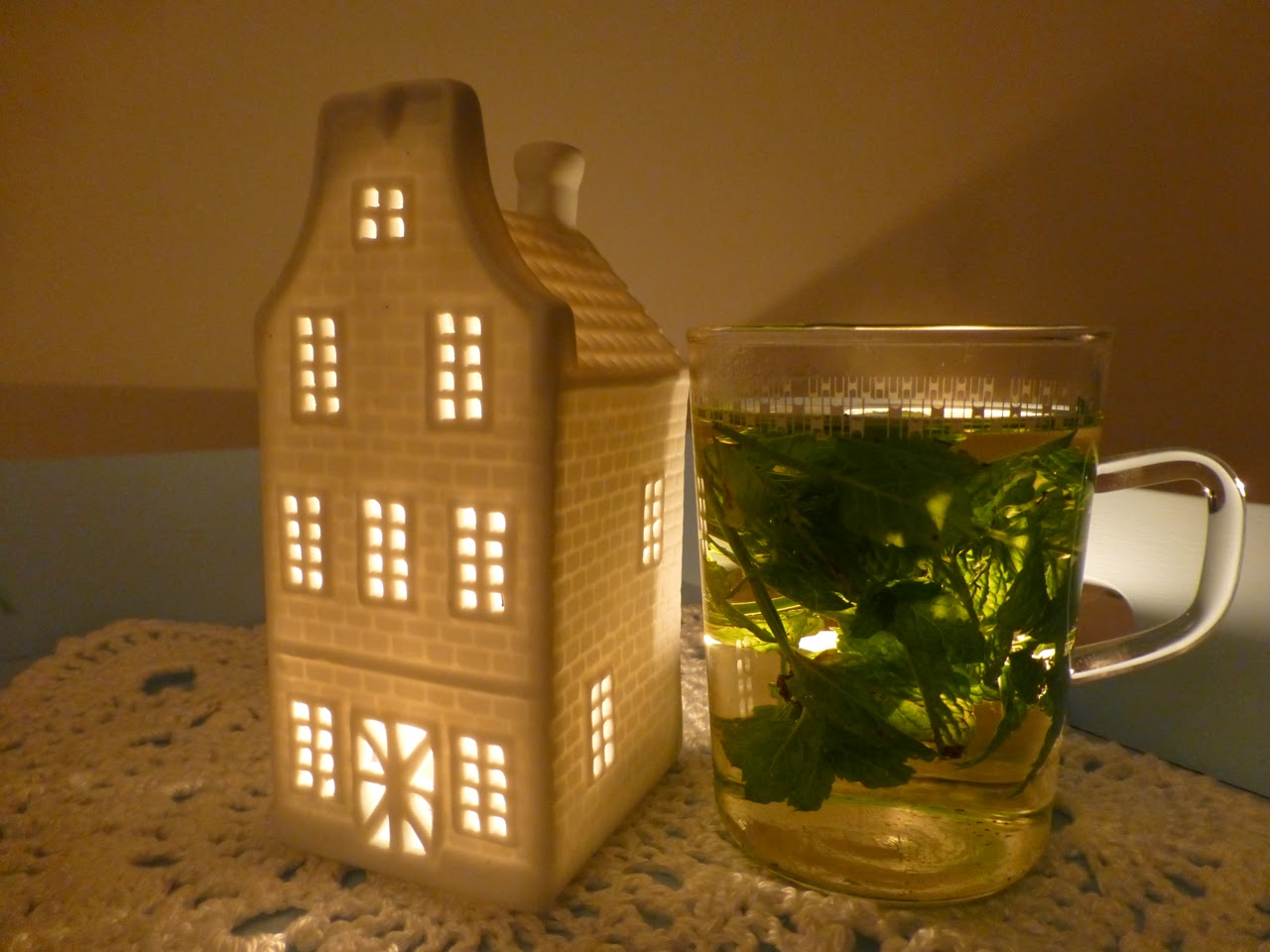 Posted by Thomasina Tittlemouse at 19:40