The Slamseys Creative Summer Challenge prompts at the end of last week and beginning of this were 'sharing', 'self portrait' and 'reflection'. I think I blurred the boundaries of each of them rather mercilessly but here's my interpretation of them anyway.

It started with the rather unfortunate stain I managed to add to my new art journal cover when using Caligo Safewash relief inks for the first time. If the ink was unintentionally indelible on fabric, then perhaps I could use it intentionally so? Anne has clearly had successful results using these inks on fabric and so have others, so, armed with plenty of newspaper, rubber gloves, a large bottle of washing-up liquid and with my art journal safely out of reach, I had another go at confronting my inky nemesis, this time sharing out the prints between paper and fabric. The colours of these inks on paper, I have to say, are absolutely spectacular - luminous and with a wonderful translucent quality, that the water-soluble ones just can't compete with.

Equipped with an array of seed-heads from the garden including some dill (which has produced a lot more seed than leaf this year) and some dried-up grape hyacinth husks, I set to. 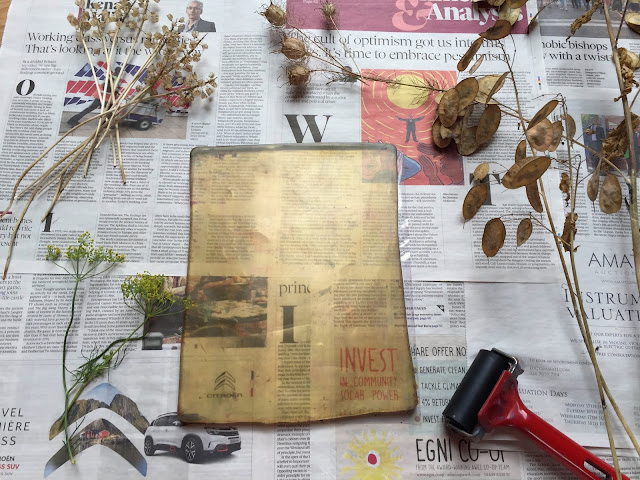 The paper prints are gorgeous in a simple kind of way - very three dimensional and as I say, luminous in colour. The fabric prints less so. What was luminous and subtly translucent on paper was dull and flat on the cotton, calico fabric. Disappointing. Perhaps I could embellish them somehow? After cautiously touching one, some hours after printing, and a luridly turquoise green thumb later, it was clear that they were still seriously tacky and would need several days' drying time. Irritating, when I wanted to get on and improve them straightaway. I pegged them up and left them to it. 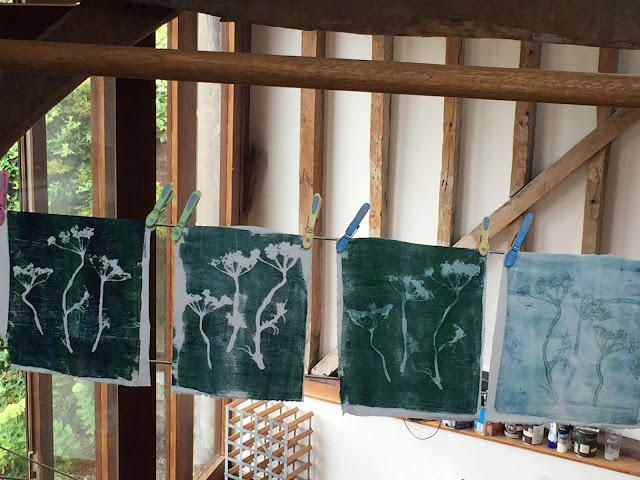 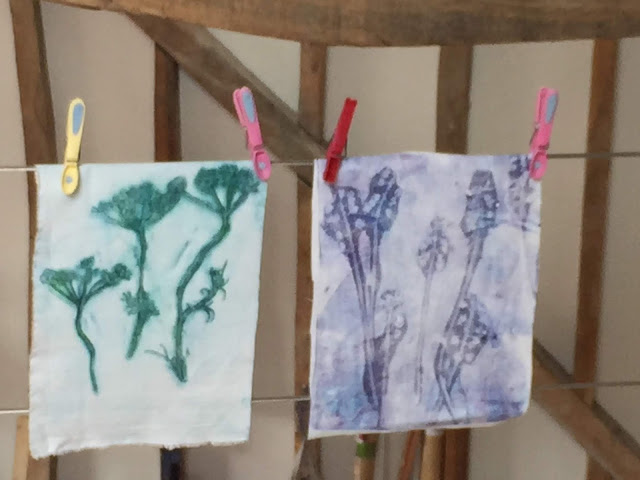 The fabric prints in the pic below are done with my poppy seed-head rubber stamp and have come out more clearly. They are, however, still tacky almost a week on, which is frustrating. 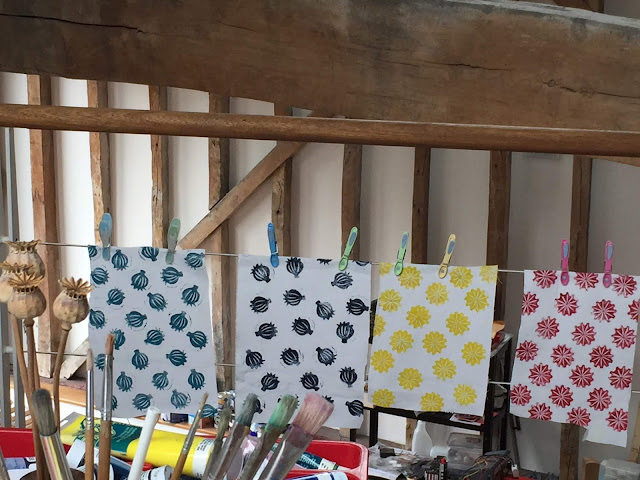 All in all, however, apart from managing to transfer quite a lot of blue ink to my face, resulting in a marked (but fortunately temporary), affinity to a woad-painted, ancient Briton and liberally coating the sink in oily blue and green stains, I had avoided staining too much else - success in part!

I liked the idea of transferring some of my print images to fabric though and while the printed fabric dried, I thought I'd spill out some of my earlier images onto fabric as well as paper.

One idea led to another and I thought may be I would make a tea-cosy out of a load of small linen scraps left over from making some aprons and napkins a few years back, with an embroidered panel of lavender on the front. 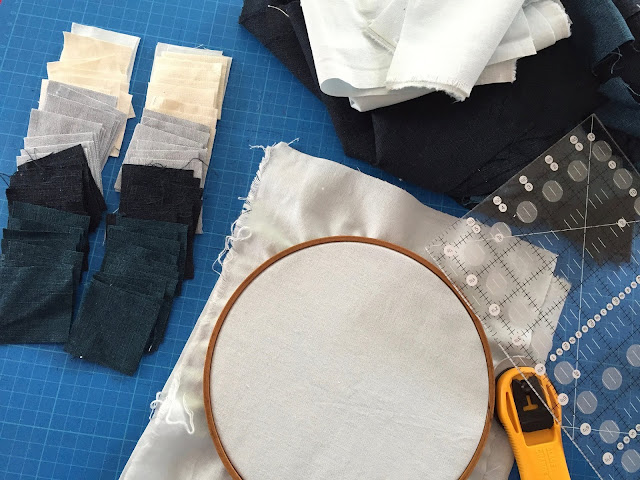 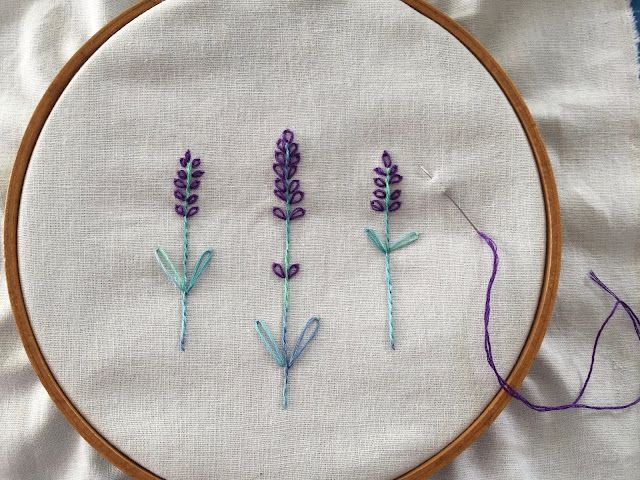 Not quite enough lavender with just three stalks... 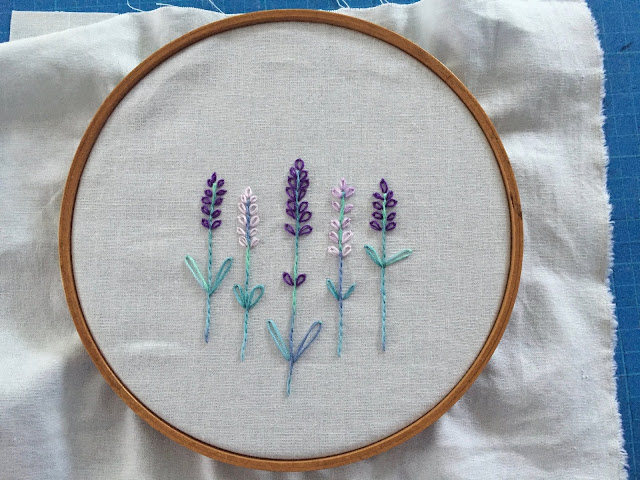 Better with five. And better still with some tiny glass beads sewn on to represent a light misting of summer rain. 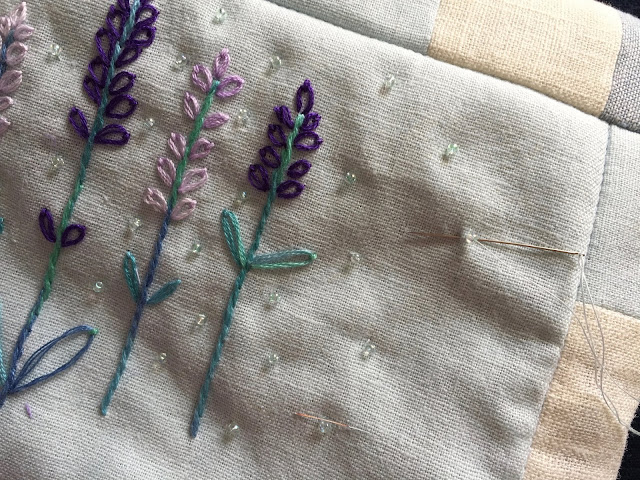 The fact that the day's prompt was 'self-portrait' made my idea seem a bit off-beam initially but then I thought that what was emerging was actually,  not a bad representation of the person I am, in a funny sort of way. We're all living patchwork pieces of context, experience and genetics, after all. 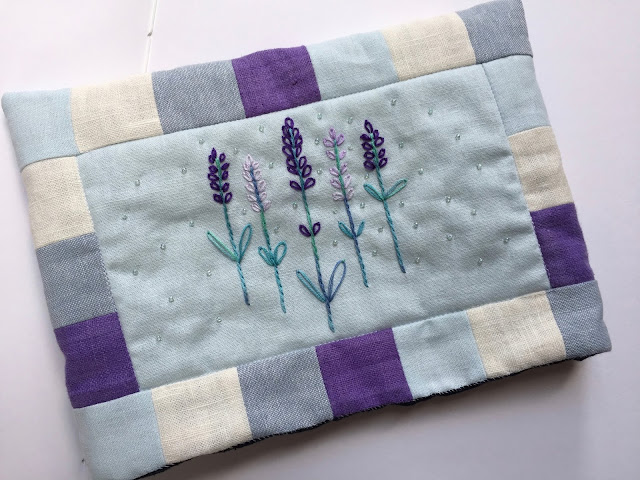 A patchwork tea-cosy was the first thing I made entirely by myself when I learnt to sew - a present for my mother who kindly overlooked the cosy's many flaws and peculiarities. I wrote about the inspiration for it and the making of it here if you're interested.

This one looks a bit more business-like but it too has a few quirks to it, such as the random piecing of the back where I got in a muddle about what square went where but only realised when it was too late to restitch it. A reminder of my all too characteristic impatience, I fear! 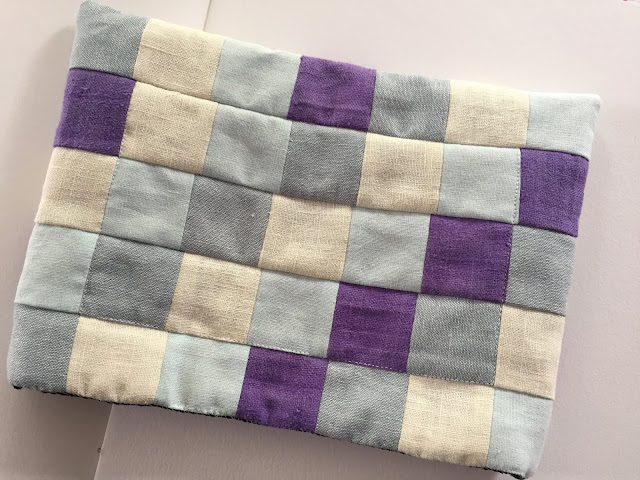 However, fuelled with enthusiasm and the fact that I had cut more little squares than I needed for one tea-cosy as well as the fact that the printed fabric still wasn't dry, I made a second one. This time with a teasel head and an accompanying bee. I stitched the spiky teasel stalk a bit long so this cosy had to be more square-shaped. But it will still suit the recipient's tea-pot so no worries. 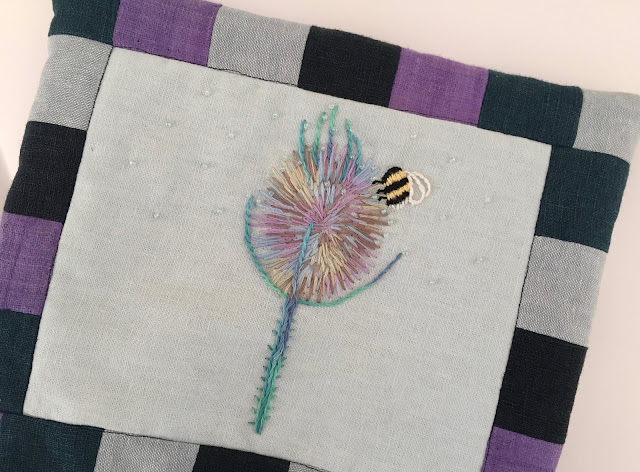 Fortified by tea from under a lavender-embroidered-cosy-that-acts-as-a-self-portrait ... 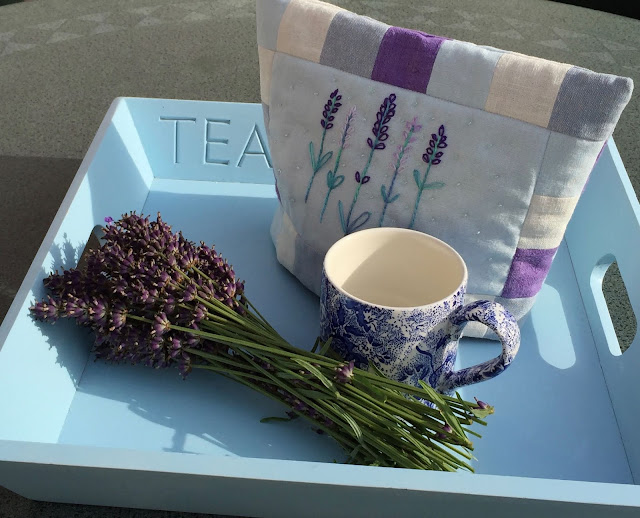 ... and a few more days' interlude, I returned to my printed fabric panels. The Gelli plate printed fabric now seemed dry and ready to be washed and pressed. Laundering has improved the handle of the printed fabric but they look as uninspiring as they did before. Faded. And not in a good way. Side by side with their paper equivalents, they are a poor reflection of their luminous paper sisters, as you can see. 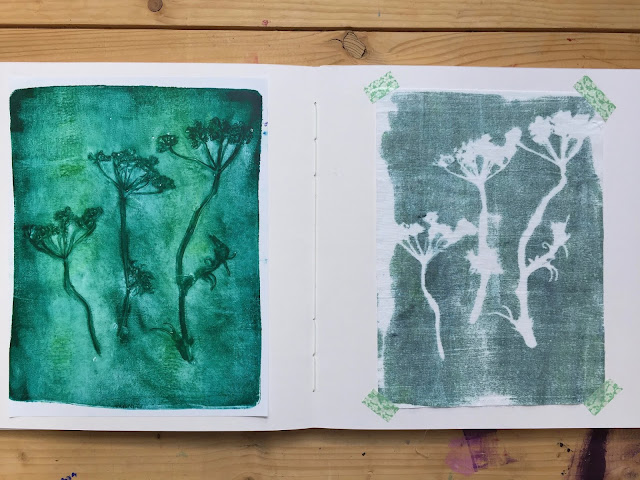 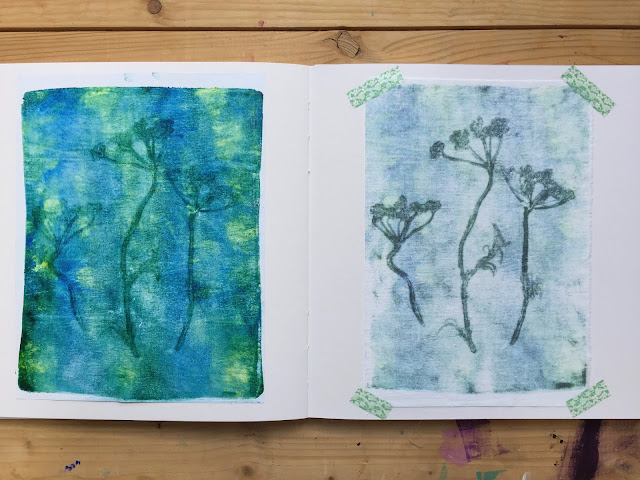 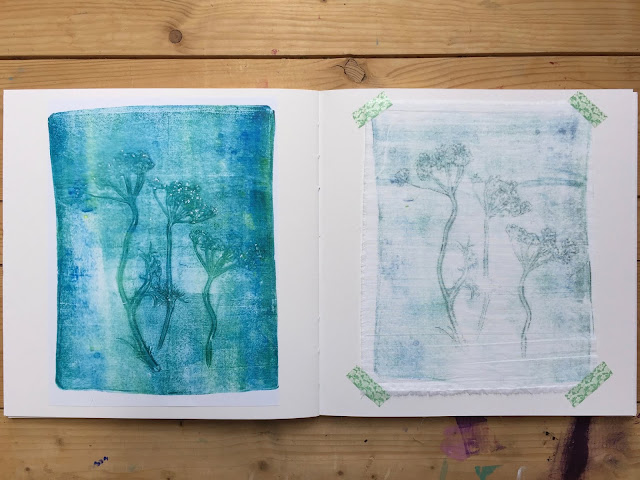 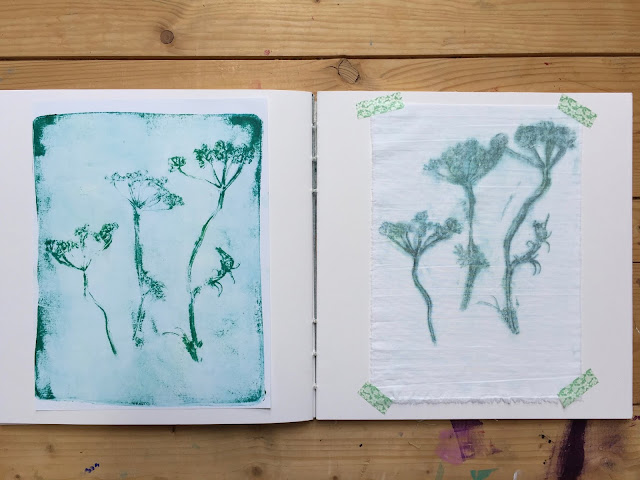 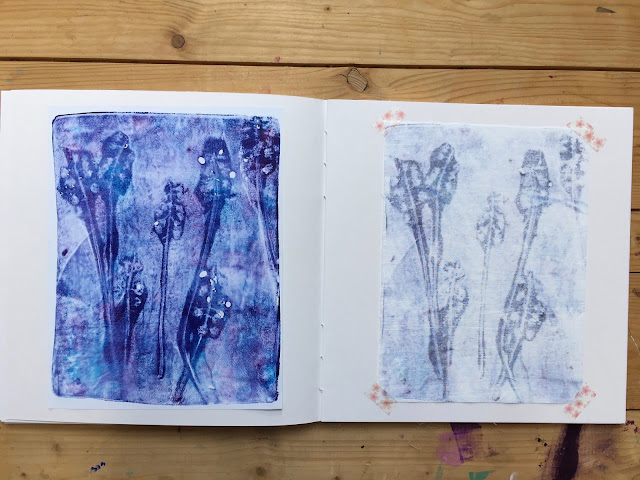 Disappointing, as I say. But may be they could be embellished by adding stitches to the ink? 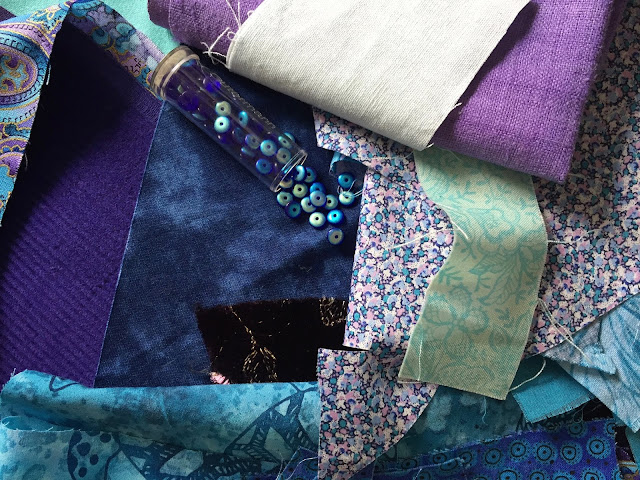 I've only embellished one so far - the rather sorry-looking print of grape hyacinth husks. I cut out silhouette shapes of the seed-heads in tiny scraps of left-over fabric and appliquéd them just to one side of each printed seed-head image so that the original print works as a kind of shadow.

And with the addition of a few flat, iridescent beads it was starting to look a good deal more interesting. 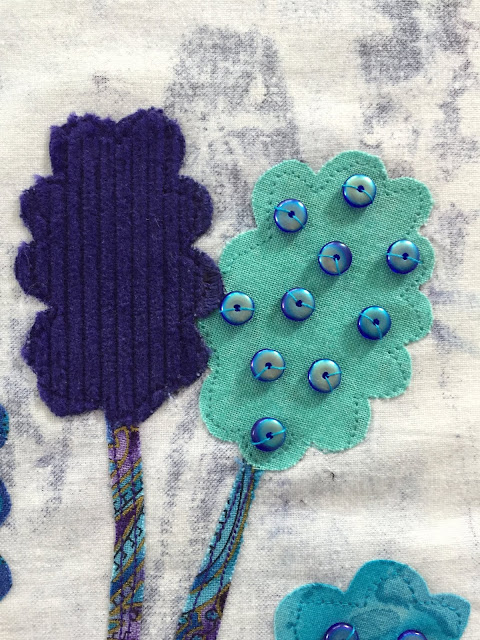 I wonder whether I have not so much embellished the original print as obliterated it. But whether embellished or obliterated, it looks a great deal better! 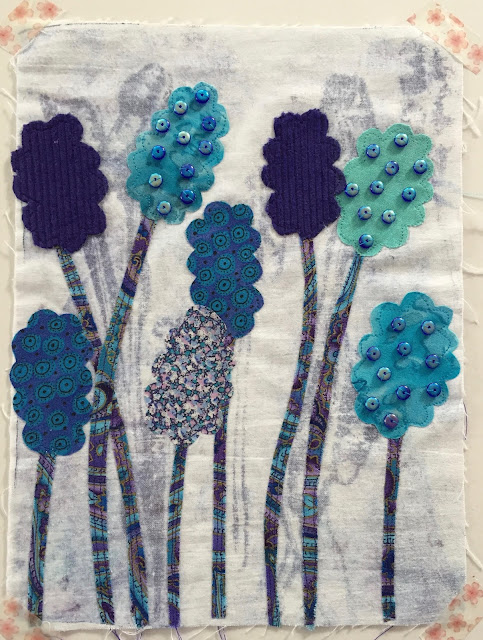 I may have a go at the other prints similarly but I have another project up my sleeve in response to yesterday's prompt of 'shaking things up with something totally new' so they will have to wait their turn!

As I said at the beginning, I am conscious I have blurred the boundaries and definitions of this week's prompts rather shamelessly. (I never was much good at following instructions!) But it's been an interesting and absorbing voyage of discovery nonetheless.


Posted by Thomasina Tittlemouse at 10:21