Tuesday's prompt for the Slamseys Creative Summer Challenge was pared down to a single word: gathering. My first thought was to go out and gather some wild plums encountered unexpectedly on a walk late last week, and use them for artistic inspiration. But the weather decreed otherwise - it poured with rain most of the day and threatened more, even when it stopped. Picking plums from a dripping tree, in soaking wet, waist-high grass seemed less appealing as an idea, the more the day wore on. Feeling slightly cheated by the elements, both of eating the plums and of an obvious response to the prompt, I began to turn 'gathering' over in my mind, first one way, then another.

The aspect I kept returning to was 'gathering' in a spontaneous or intransitive sense; ie things that gather themselves, rather than things that gather other external objects; natural gatherings, where, from multiple components, a single entity emerges that is separate from, and more than, the sum of its parts. I was reminded of a book my sister gave me last Christmas about books and birds called 'As Kingfishers Catch Fire' (which is itself the title of a poem by Gerard Manley Hopkins). It's a quirky and intriguing compilation of bird-related tradition and the place birds occupy in literature. I looked up the chapter on swallows and thought of the photographs I took a couple of Septembers ago as the swallows prepared to leave at the end of the summer for their migration south. Early one morning, they were massing on telephone wires, wheeling into the air and then returning to settle again, before their definitive time of departure.

But swallows were pipped at the post by starlings and in particular by those amazing spontaneous gatherings that you sometimes see at twilight in autumn as starlings prepare to roost, known as 'murmurations'. These are fascinating phenomena that are made up of tens of thousands of birds, gathering and wheeling in fluid, elliptical shapes against the sky. The flock seems to act as one with a collective identity that subsumes each individual bird, without compromising it. 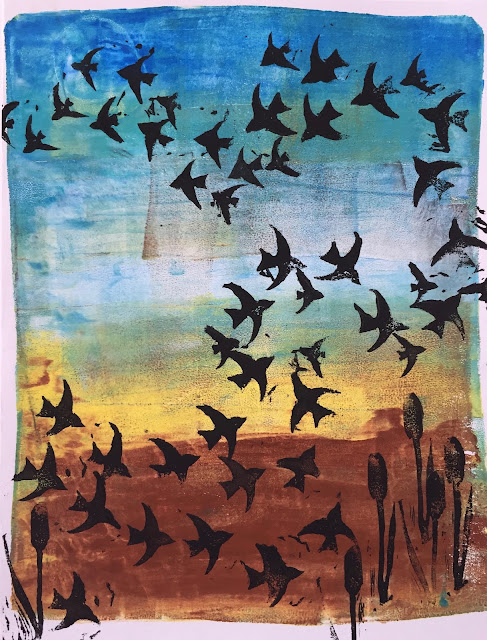 In 'As Kingfishers Catch Fire', Alex Preston quotes an extract from Henry Green's novel, 'Concluding' which describes it beautifully:

'Then as they came to where the trees ended, and blackbirds, before roosting, began to give the alarm in earnest, some first starlings flew out of the sky. Over against the old man and his granddaughter the vast mansion reflected a vast red; sky above paled while to the left it outshone the house, and more starlings crossed. After which these birds came in hundreds, then suddenly by legion, blank and blunt against faint rose. They swarmed above the lonely elm, they circled a hundred feet above, until the leader, followed by even greater numbers, in one broad spiral led the way down and so, as they descended through falling dusk in a soft roar, they made, as they had at dawn, a huge sea shell that stood proud to a moon which, flat sovereign red gold, was already poised full faced to a dying world.'

Having identified where I was going, I just had to think out how to represent the idea.

I clearly needed some landscapes against which the birds would stand out so I started by playing around with stripes of colour on the Gelli plate to represent an open horizon - a darkening sky, lightened possibly by a rising moon, some open fields and brushwood against which my murmurations could take flight. 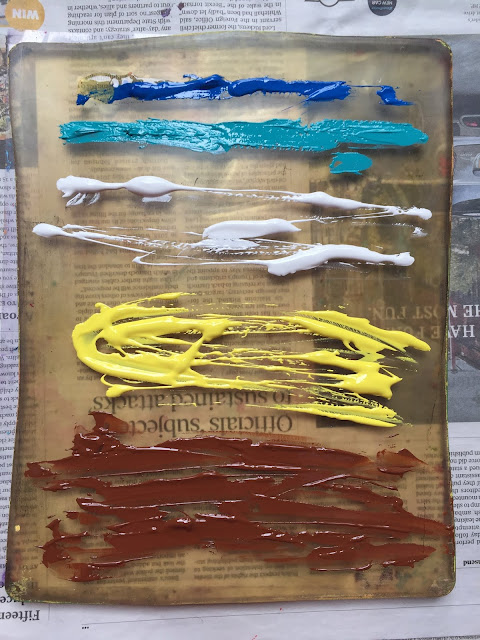 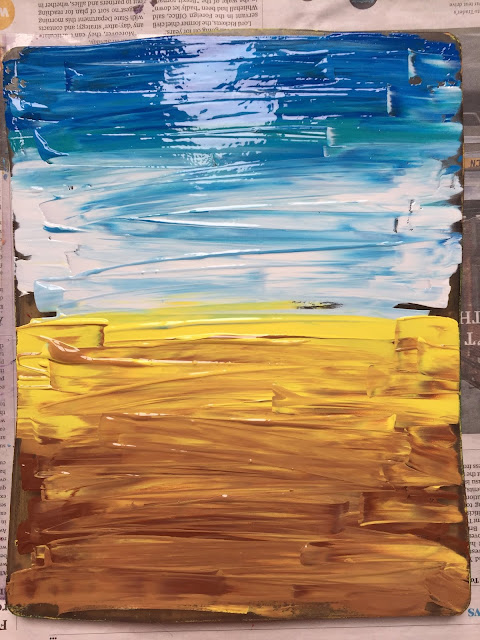 As you can see, I printed rather a lot of these(!), some with moons, created by a simple, paper disc used as a mask and some without. Some look more like sea-scapes than landscapes. You just never quite know how Gelli prints will turn out. 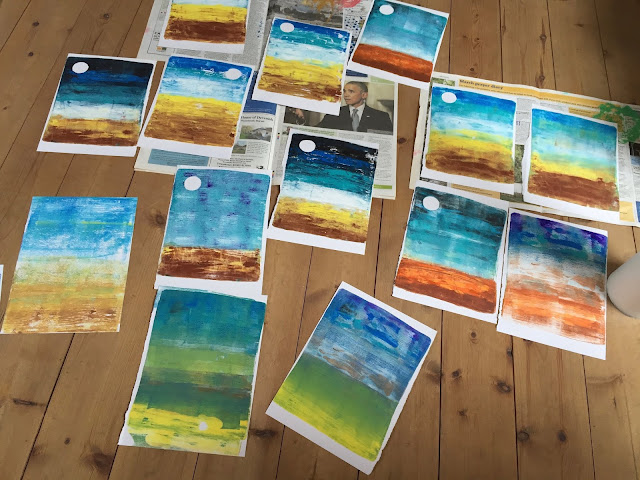 Now for the trickier challenge of how to represent the birds. Wednesday's prompt was to think about applying the '5 R's to the creative process and actually, that clinched matters. Left over from my poppy seed-head rubber-stamp carving were some fragments of Speedycarve rubber. Bingo! Starlings, here I come! 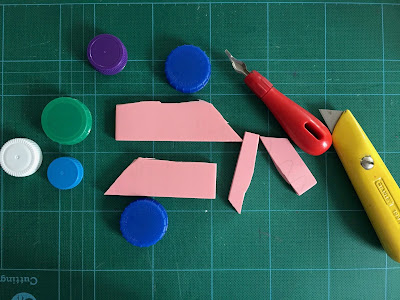 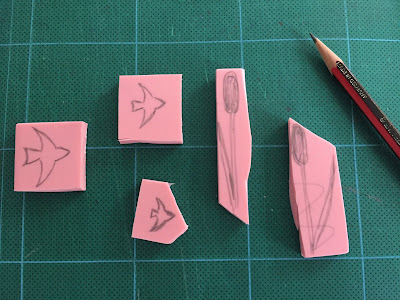 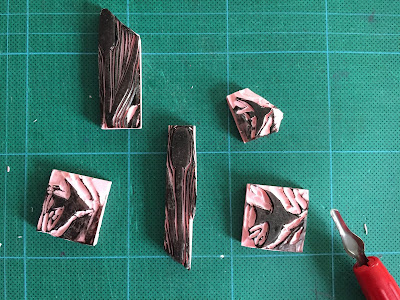 I made three stamps of the same, simple bird shape in decreasing size and tried them out in my concertina sketch book. A bit more shaving away of the background and they were good to go, as were the bullrushes I had inscribed on a couple of extra long thin off-cuts. 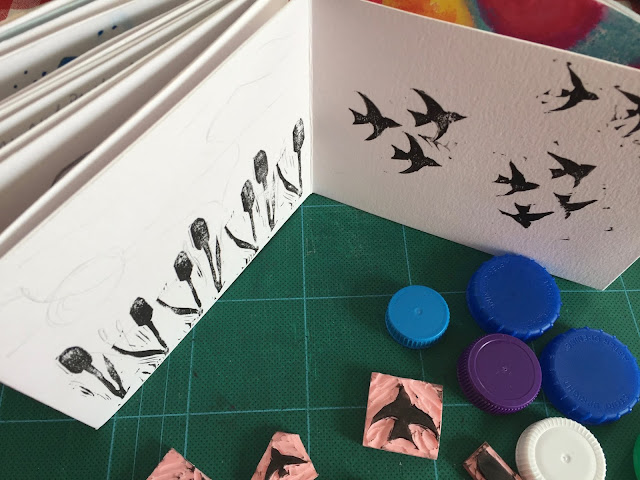 The stamps are quite fiddly to print with so I stuck them to some old plastic bottle-tops, rescued from the recycling bin, as handles to make printing easier. 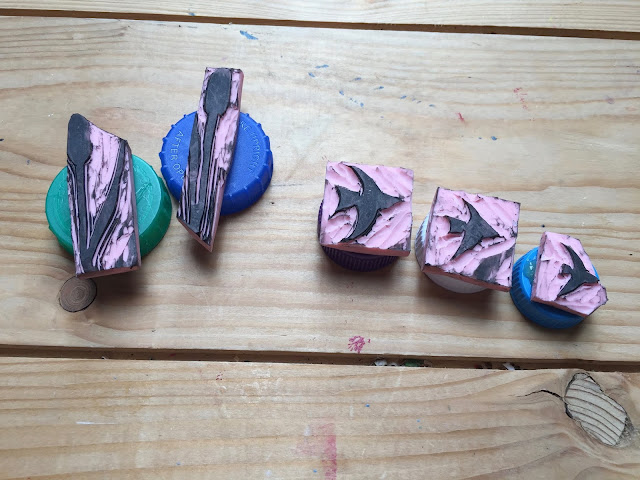 Once the landscape backgrounds were dry, I could create my murmurations - not as easy to get the collective swirling shape as you might think, especially while trying both to avoid overprinting the birds and not to get surplus ink on the paper, off the edge of the stamps, (you can see I have failed on both counts in a number of places!) but all in all, I am not unpleased with the results. They are impressionistic rather than photographic but that's what I was after. I think the one at the top of this post is my favourite but they all have something I like about them. 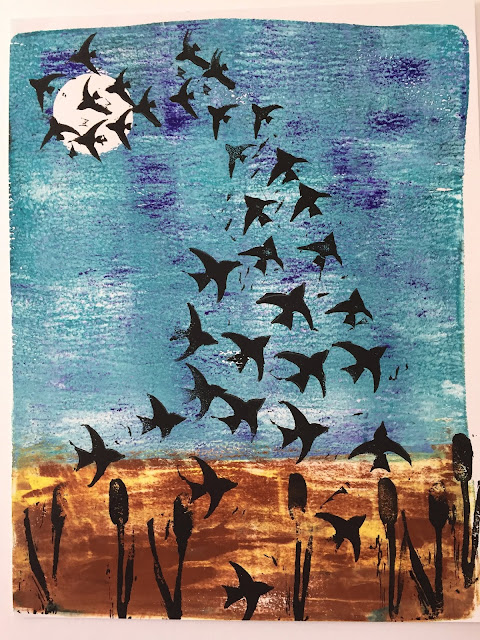 They would make nice cards, if they were smaller, I think. 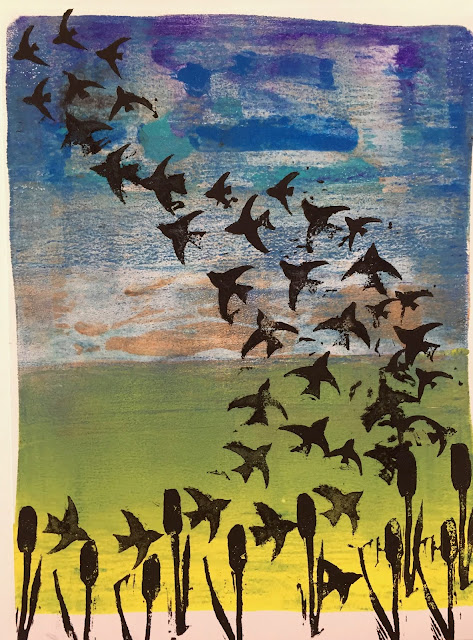 On a practical note, I've had to abandon the more difficult to use Caligo Safewash inks for the simpler Speedball Water-Soluble Relief ones which are what I've used here - I just can't manage to control multiple colours in the non-watersoluble form, without getting in the most almighty mess. Anyone have any tips on using them? I am reluctant to admit total defeat but I also know my own limitations!

Posted by Thomasina Tittlemouse at 17:40