The Granny-Stripe blanket that I have been making for the last six months is finally finished! I didn't quite manage it for H's birthday but I have now completed the final rows and I am really pleased I persevered with it. I don't know why this particular project proved to be such hard going - I like making blankets even though by their nature they are bound to be more time-consuming than smaller things; the rhythmic, repetitive nature of them is soothing and easy and the stripiness is fun but this one has somehow been hard to keep motivated about. I think I preferred doing the stitch of both the vintage stripe and ripple blankets I made last year and also the not insignificant fact that both of those had more colours in the overall scheme.

Anyway, be that as it may, the finished article is now ensconced in its final destination and I think it looks quite good. H is very pleased with it and that, after all, is all that matters.

I used Lucy of Attic 24's Granny Stripe Pattern which you can find here. The pattern is very clear and easy to follow. Lucy used a whole rainbow of colours in hers and if I were to make another this is what I would do rather than keep to a more restricted palette like this one. But although perhaps less fun to do, keeping to this palette has had the effect I wanted - bold, bright and definitely-not-too-feminine.

I used a 4 mm hook and Rico Creative Cotton yarn which I really like working with. It's not always easy to obtain all the colours in the range but it's worth a bit of hunting around for. It's not expensive (always good news for blankets because they use so much!), the colours are clear and bright and blankets made with it have a lovely, heavy softness about them. What I particularly love about all crochet blankets is that they are wonderfully snuggly and warm but never stifling - they breathe with you and the ambient temperature somehow in a way that I've not found with other blankets. Perhaps it's all the holes that allow for fluctuation in temperature. Not sure - physics was never my subject! 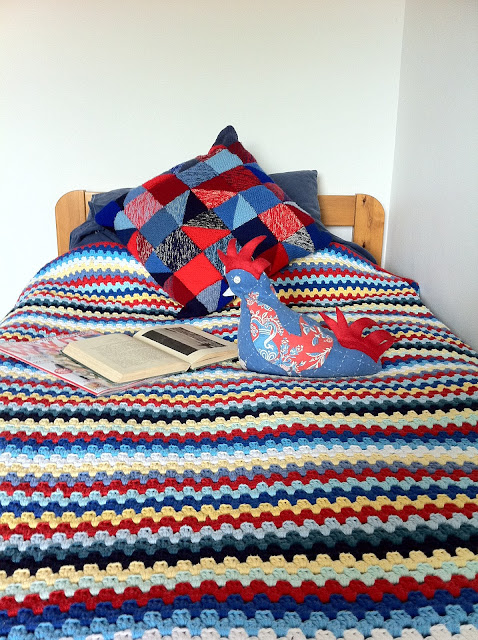 The cushion with its knitted squares cover was made by my mother for H, for his birthday, using lots of oddments of yarn left over from knitting things for him when he was little. All the grandchildren are getting one apparently, using oddments of yarn left over from knitting things for them so each one will get a cushion in colours they like. Unlike her elder daughter, (me!), my mother is pretty nifty with the old knit-sticks! I am wondering whether my next foray into knitting might not take a leaf out of her book. In principle, (although of course one never knows in practice!), an assemblage of knitted squares in some shape or form might not be beyond me.

The chicken is not part of the normal layout of the bed. He is the doorstop but he migrated here when he saw me taking the photos! I made him out of off-cuts of H's curtains a few years ago and he is stuffed with popping-corn maize to give him a decent weight - a bit like our birdie visitors yesterday after their breakfast visit! This cockerel is less intimidating however than yesterday's and, also unlike yesterday's, is amenable to being moved on at whim! Clearly he likes reading too! 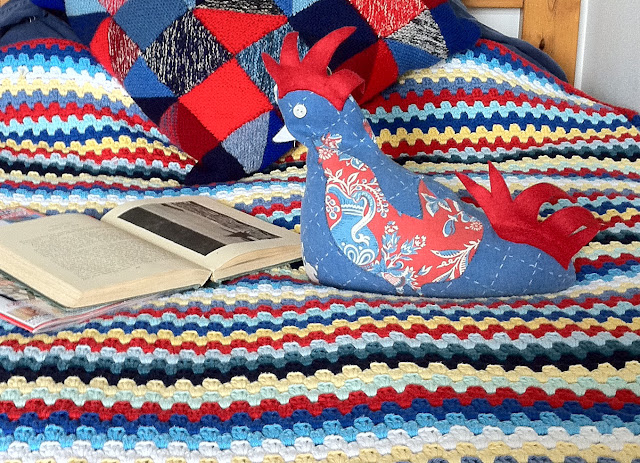 I think this reaching of the Granny-Stripe Finish-Line calls for a little celebration ... 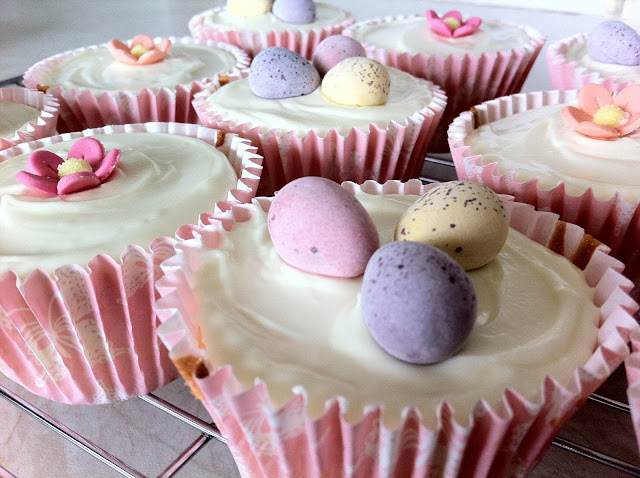 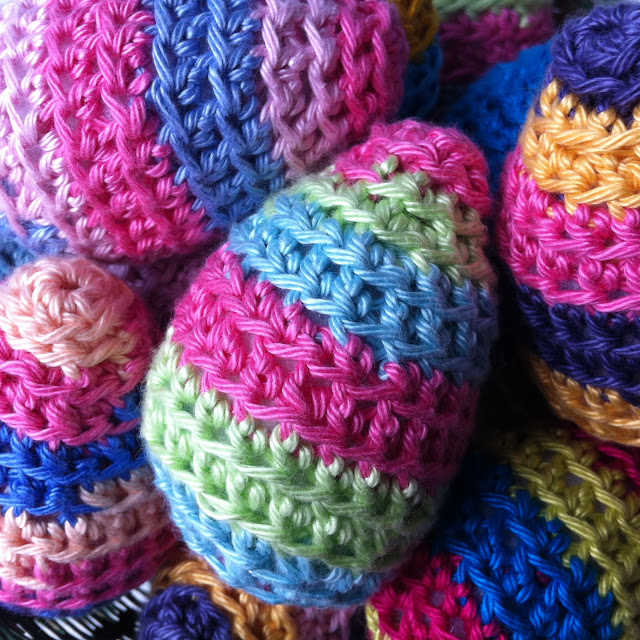 The little surprise presents in the pockets of my give-away Spring aprons were little stripy crocheted Easter eggs. I loved the idea of little colourful crochet eggs to pile up in a basket and last Easter set about locating a pattern. 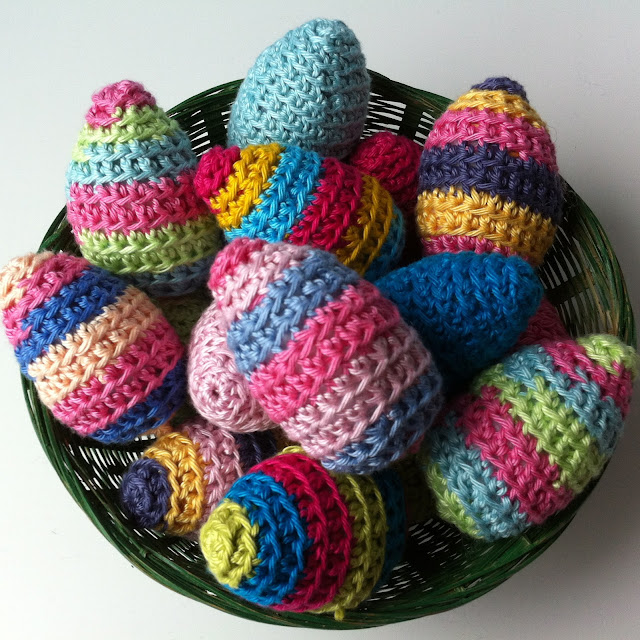 Not as easy as you might think because although if you Google "Crochet Easter egg pattern" quite a few possibilities come up, they don't all work out exactly as the pics would have you believe, or not in my inexpert hooky hands anyway. Size was an issue - I didn't want to make tiny eggs but neither did I want great big ones; what I was after was something that came out about the size of a large hen's egg. Again not quite as easy to find what I was looking for as I thought it would be.

The first pattern I tried didn't end up looking like an egg at all - more a kind of barrel and it was too big. Not what I was after. Further efforts produced something passably egg-like but too small, or something that was egg-like at one end, but not at the other. No good either.

Anyway, after a certain amount of trial and error, I found a pattern here at Easy Makes Me Happy which I tweaked a bit, more by accident than design, and this is the crochet Easter egg to beat all eggs as far as I am concerned! Last year I made a handful of eggs in plain colours. This year I got adventurous and went stripy! I used a 4mm hook and a cotton DK weight yarn in a variety of colours.

This gave me the size of egg I wanted and, by going into the back loops only, I got a nice stripy ridged effect in the crochet which I really like. I discovered this by accident last year when my very novice crochet skills were trying to follow the pattern and didn't quite manage it. Then, of course, this year I had the dickens of a job working out what I had done, when following the pattern correctly this year didn't produce the same look as last year's! For the stripy numbers I did two rows of each of three colours. Last year's plain eggs sit nicely now alongside this year's stripy ones (the ones I haven't given away that is!).

Have a go! They aren't at all difficult and are pretty quick to make up. The only thing is that you need to concentrate on the pattern as you go, so they are not easy to do if there are distractions around.  A few eggs went well and truly wonky when I tried to answer the phone half way through, for example! And use a stitch marker if, like me, keeping count is not your strong suit! 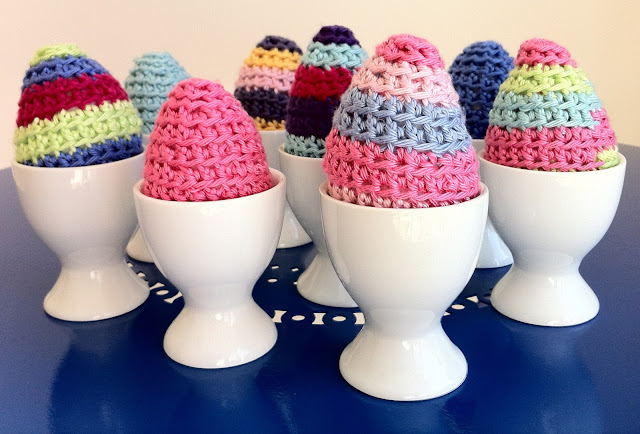 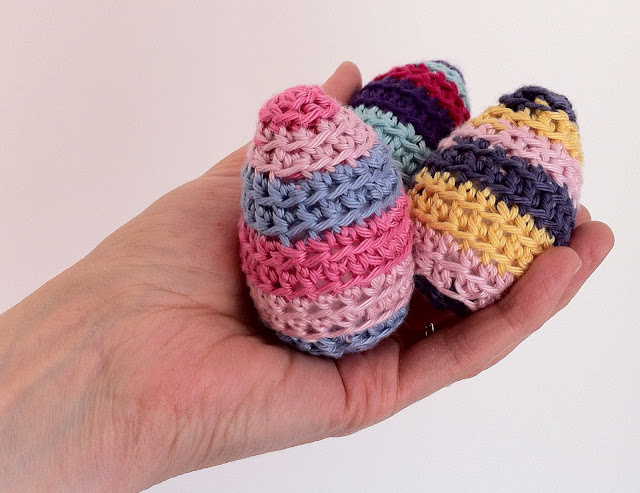 Posted by Thomasina Tittlemouse at 14:11 10 comments: