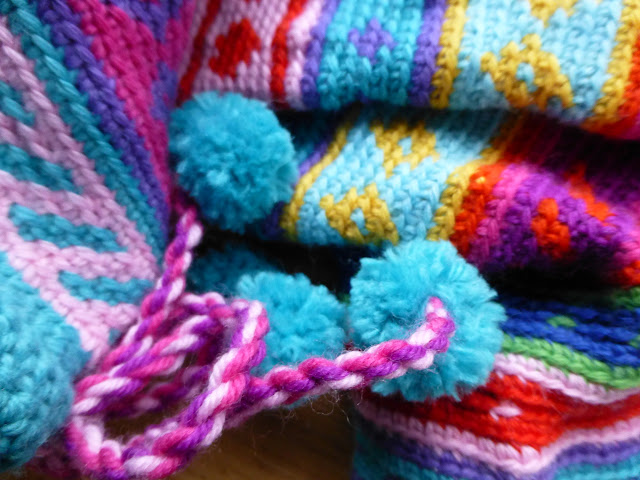 It all began with one of those meanders along the highways and byways of the Interwebs when you can't remember how on earth you ended up where you have done, but you feel rather pleased at your destination anyway, however random the chance that brought you there. Don't ask me what started the meander - I have absolutely no idea now - but what I stumbled on in January was this website featuring Russian felt boots. They are called "valenki" in Russian - traditional footwear for men and women that provide excellent insulation in the severe cold of a Russian winter. Apparently they are effective in temperatures as low as - 40 C. They are traditionally worn both inside the home and outside in the snow, if it's dry or compacted snow, without any ill effect. But of course, being felt, they are not waterproof so they're not suitable for wearing in wet snow, or slush, (or English rain). These days, you can get plastic galoshes, or overshoes, to wear over the top of your valenki, in wet conditions, but originally they were designed just for the intense, dry cold of the Russian winter.


While we never have that kind of cold in the UK - or that kind of snow, sadly - I find my feet often feel the cold and am always on the look-out for ways of keeping them warm in winter. These Russian felt boots seemed rather appealing. But would I wear them enough to justify buying a pair, bearing in mind that I live a long way south of the Arctic Circle, and would only be able to wear them indoors, on account of English rain and mud? I hummed and hawed and when I discovered that one of the options was plain valenki decorated with crocheted flowers, I nearly succumbed. I could buy a plain pair and add my own crochet flowers. Bingo! But then my more frugal self toyed with the idea, not just of decorating, but making a pair of valenki myself. There must be loads of felted boot patterns out there, why not have a go from scratch?

Why not, indeed?! The rest, as they say, is history. I found a wonderful pattern, not for felted boots exactly, but for crocheted "mukluks" or slipper-socks. "Mukluks" are similar to valenki. They were also originally worn by those living in the Arctic. They differ from valenki in that, traditionally, they were not made of felted wool, but sealskin and they usually have ties to adjust the fit, rather than the single-piece wellington-boot-style of the valenki. They were worn, not by Russians, but by the native peoples of the Arctic much further west, at the northernmost tip of America. As well as keeping feet warm and dry, they also made your footfall silent and mukluks were therefore traditionally worn for hunting across the arctic snows. This version however is designed for tamer environments. I shall not be ice-fishing or moose-hunting in mine! The pattern is by Erssie Major and you can get it on Ravelry here. You can get a knitted version as well if you have a mukluk fancy, but you don't crochet.

The pattern uses tapestry crochet and a much thinner hook than you would normally use for the weight of yarn so that the fabric you make is quite dense and stiff. 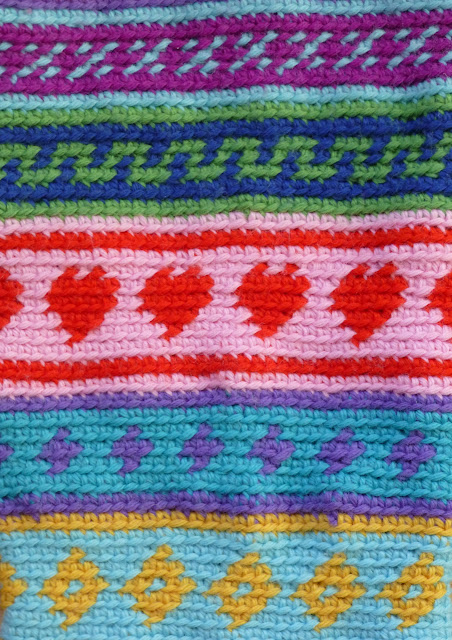 Because fit was important with these and I wanted to use a different yarn from that specified, I broke with habit, or I should say, laziness(!) and made a tension square. Worth the trouble, I have to say. I don't like working with very thin hooks; 3mm is about as thin as I'll go, comfortably, so I was relieved to find that although the yarn I wanted to use was aran weight rather than DK, a 3mm hook was fine. In fact the prescribed 2.5 mm hook and DK yarn would have come out too small. OK perhaps, if you don''t want to tuck your jeans into your mukluks but I did.

I've dabbled with tapestry crochet before. I wrote about it here - it's fun, if a bit fiddly until you get into the swing of it. Worth persevering, as it gets a lot easier and quicker, with practice. 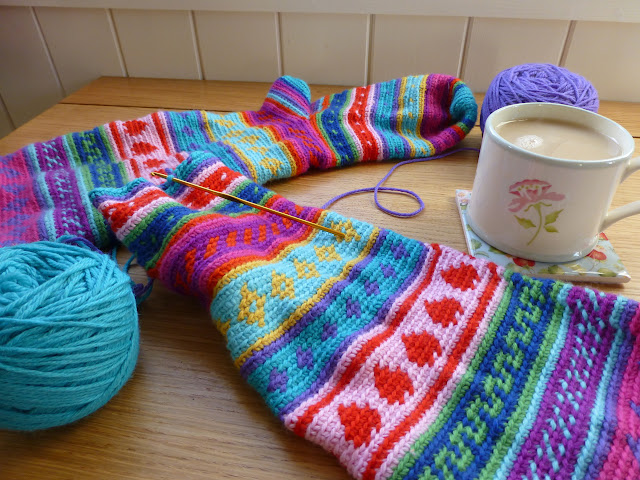 You need to change colour ahead of needing to use it, which results in quite a lot of twists getting put into the working yarn. 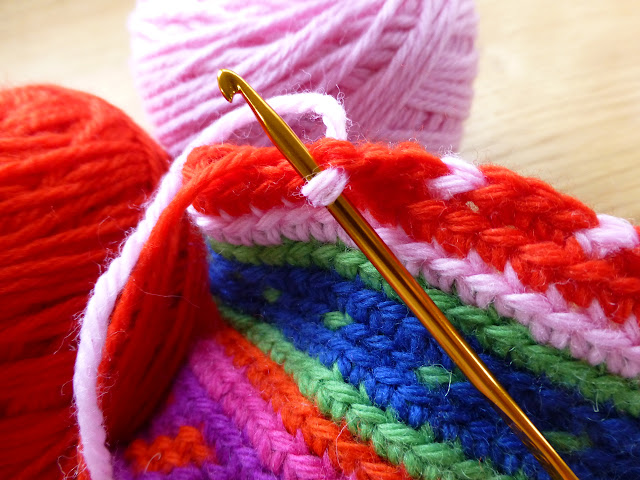 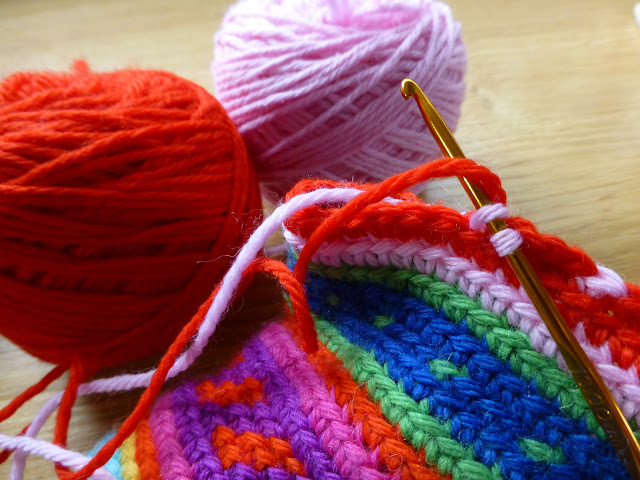 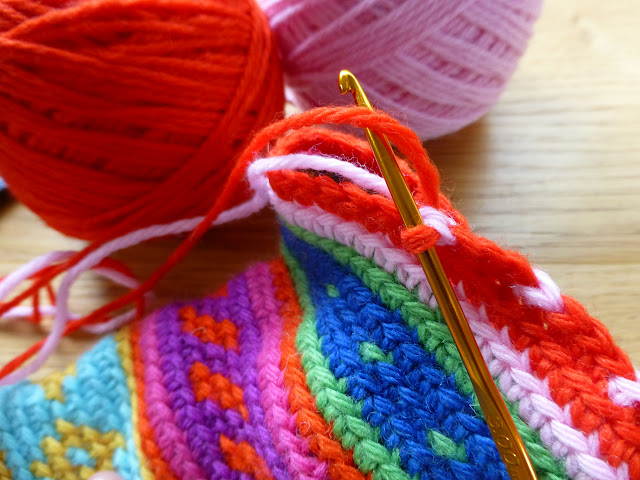 I found the best way to deal with this was to push the twists down the yarn away from the work for as long as they would happily slide along and when they wouldn't slide any longer, to hold the work up by the two strands and let them spin the twists out by themselves before resuming and then repeating the process when necessary.

Here you can see the accumulated twists that I've pushed down again towards the work so you can see how many there are, before I hold up the pink and red yarn strands and let the whole lot untwizzle itself. 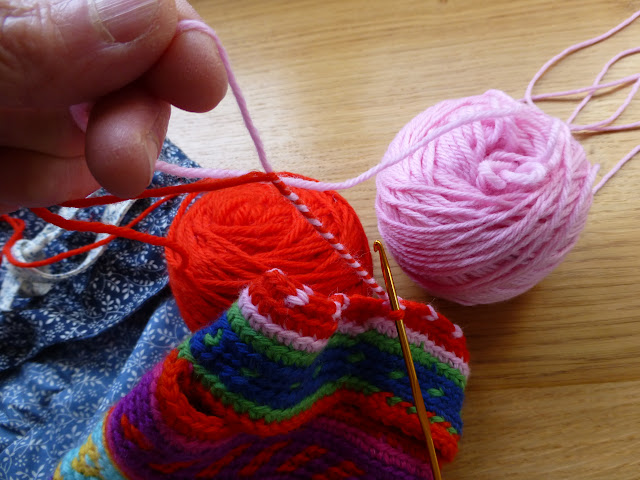 Initially I was going to restrict my colour palette to turquoises, purples and pinks but the mukluks had other ideas and it soon became apparent that they more or less had a mind of their own. So they are much more multi-coloured than I originally intended. I do think they would also work up very effectively in a much more restricted and/ or toned down palette. I might even consider making another pair, just to see!

The yarn I used was Cascade 220, mostly left over from other projects. It's a perfect make for using up oddments of lots of different colours. 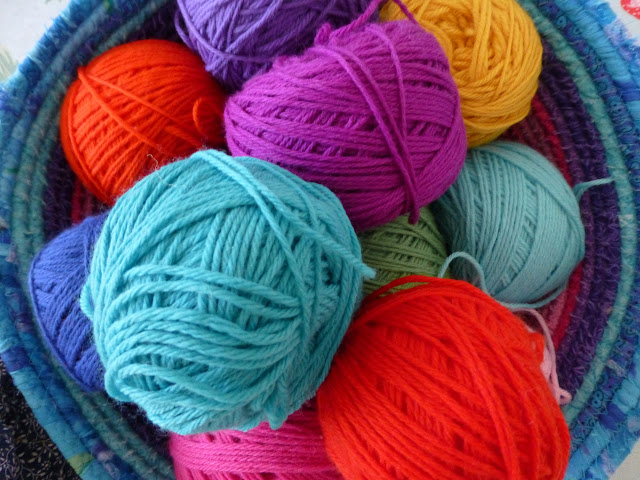 In total, I used eleven colours. The specifics are as follows if you're interested:

The finished mukluks are longer than the pattern specified because I wanted them to be properly knee-high. That meant adding two extra bands of patterning. One band I repeated from the top, but in different colours, and the other I made up myself, using a simple heart design. I also added some extra rows to make the channel for the twisted cord at the top after I'd finished the basic mukluk. All in all, these additions gave me the extra length I was after. 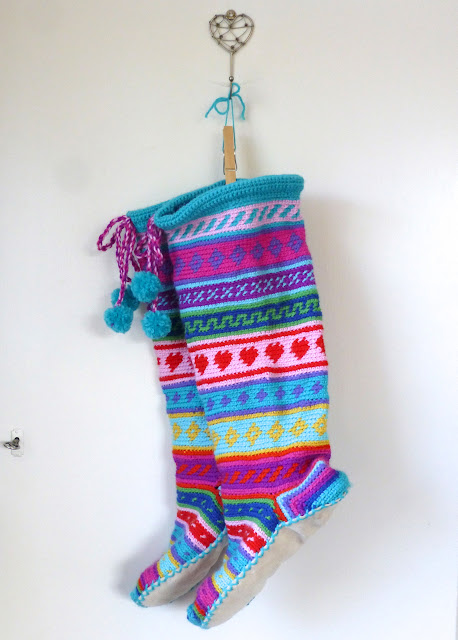 And my, am I pleased with them! They are bright, cheerful and as warm and comfortable as can be. The fit is generous enough to wear over the top of my jeans (which is what I wanted) and although they have these gorgeous stripy cords and happy pompoms to tighten the tops, they hold up perfectly well without needing to use them. 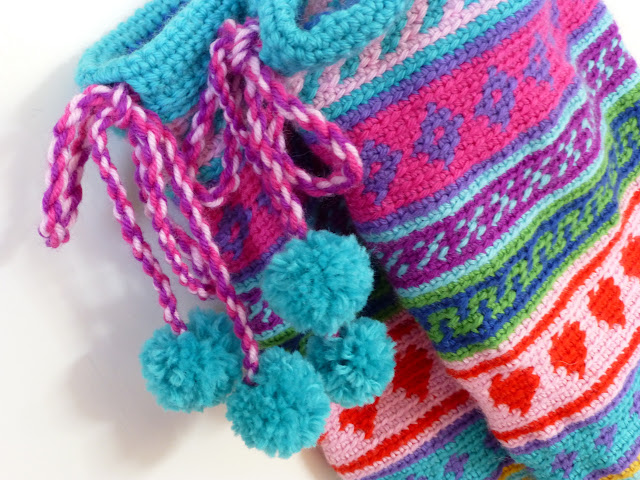 The pattern suggests using moccasin-type soles which are perfect because they have a shallow "wall" along the sole making a kind of tray in which each foot sits and the "wall" is then sewn in place using pre-punched holes. These, sadly, are not available in the UK so I used a pair of suede slipper soles from Joes Toes, (a brilliant and inspirational emporium that I am sure I shall revisit.) When you are sewing on the soles, it is very helpful indeed if you can persuade a friend to insert their hand into the mukluk while you stitch. Be careful though, or a carelessly jabbed needle will render your helper both nervous and reluctant to continue! I am pleased to report that no hands were damaged in the construction of these mukluks! 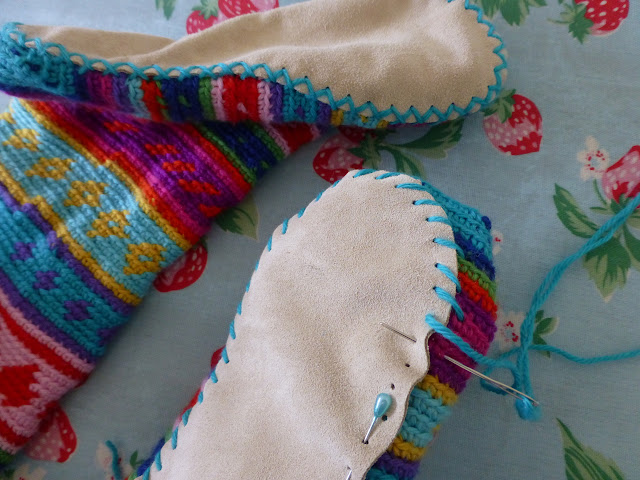 These soles don't have the shallow-tray, moccasin-design but neither do they hide any of the stripiness of the heels and toes which the moccasin-style ones might have done. 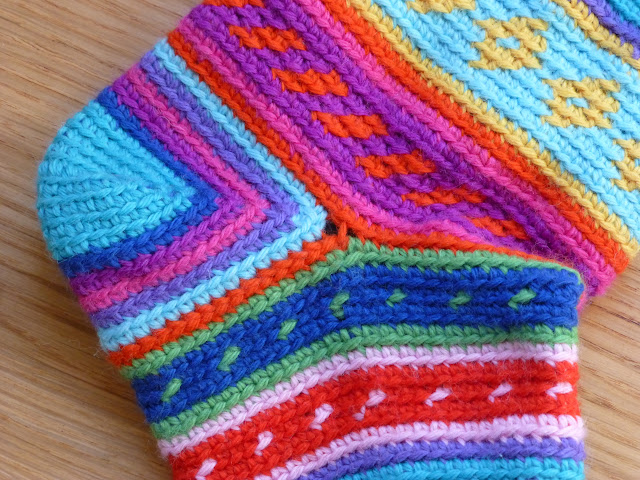 Be warned, when selecting the size of sole, that you will probably need to go down several sizes - I made the mistake initially of measuring my shoes but actually, you need to go by your foot measurement because the mukluks are closer to a sock, in fit. My soles, for example, are actually size 3-4 even though my shoe size is 6.5. 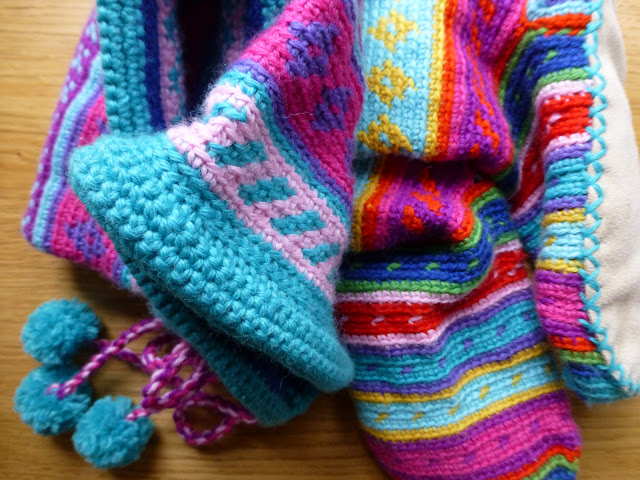 Inside the mukluks there is a hidden layer of extra cosiness too, in the form of a pair of sheepskin insoles from here. Gilding the lily, perhaps, you say?! I beg to differ! Putting my feet in these at the end of a long day is proving to be one of winter's great joys! As January proved to be a particularly grim month, I am enjoying the lift my mukluks are giving February! 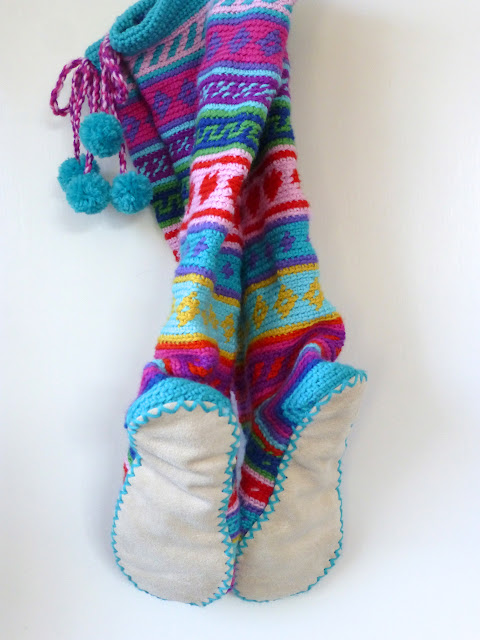 And if we should be lucky enough to have a spell of proper arctic weather with cold crisp skies and frost that disdains melting even though the sun is out, instead of this constant, miserable, grey rain and wind, my feet are ready. I may even wear the mukluks, out and about, inside my Hunter wellingtons with the pom-poms peeping out of the top.

H informs me that along with my green coat this get-up would amount to pushing the embarrassing-parent-meter into the red zone but I am confident I am not yet in my mother's league with her infamous "tea-cosy hat" a garment that has gone down in family annals as the most embarrassing garment to be seen out with, ever! I can best describe it as a kind of tam o'shanter that came out way too big and in an ingenious bid to take up the slack, she bunched up the centre to make a kind of bulky top-knot. It is, shall we say, slightly peculiar, but very warm! She knitted it over forty years ago, when I was about six. I regret to say that my sister and I found it pretty embarrassing then and the next generation have unanimously maintained our approach! But it lives on indefatigably and when my parents came to stay this last Christmas and we went for a walk, guess what emerged from my mother's capacious pocket?! And do you know what? I was secretly pleased it was still going strong! One day, you never know, H might be pleased to see my mukluks in the same way!

Wishing you cosy toes on a cold February day!

Posted by Thomasina Tittlemouse at 10:34 16 comments: