"Against the dying of the light..."

Do you know that poem by Dylan Thomas, "Do not go gentle into that good night"? Written for the poet's ageing father, slowly losing his sight, the poem is a brave paean against the gathering darkness of physical blindness, ageing and death and stirs up embers of defiance that refuse to lie down under the weight of inevitability. As with all good poems, you can read it on many levels. Although it clearly refers to more than just the seasonal fading of light in autumn in the northern hemisphere, it's very appropriate for that, as well as its more metaphorical themes.

Every year I find the shortening days and increasing darkness more troublesome. It never worried me as a younger person but it really gets to me these days. No wonder people who live in places in the far north, that never really get properly light at all in winter, find depression a common problem.

This year I have found the shortening days even more depressing than I usually do and in order to do something about it, I signed up for a free e-course run by Kathy of Homespun Seasonal Living, called "Embracing the Dark Days". It runs for seven days over this week and next. Each day there are simple but effective suggestions as to how one might embrace the darkness of late autumn in a positive and creative way. I am finding it really helpful.

One of the suggestions at the beginning of the week recommended "setting intentions" - conscious aspirations for ways in which to live positively and creatively during these darkening days. One of the intentions I set for myself was to make sure I get outside every day, not just in the early morning when it is barely light, when I usually walk for half an hour or so, but when the sun is properly up (and hopefully out), in order to maximise the benefit of what light there is. 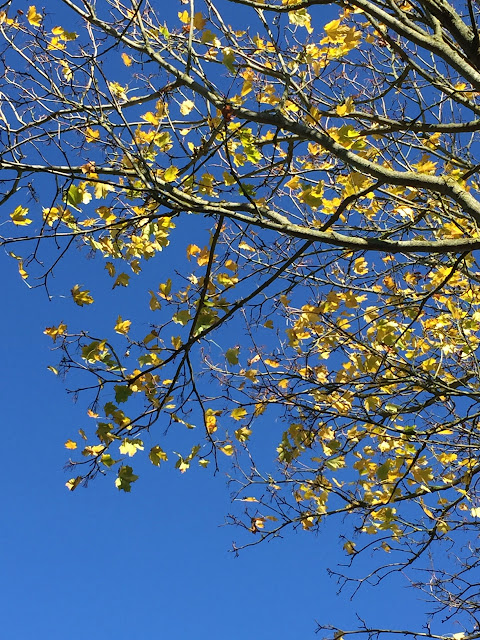 Not necessarily for more than five or ten minutes, depending on what the day holds, but making sure that I do it every day. 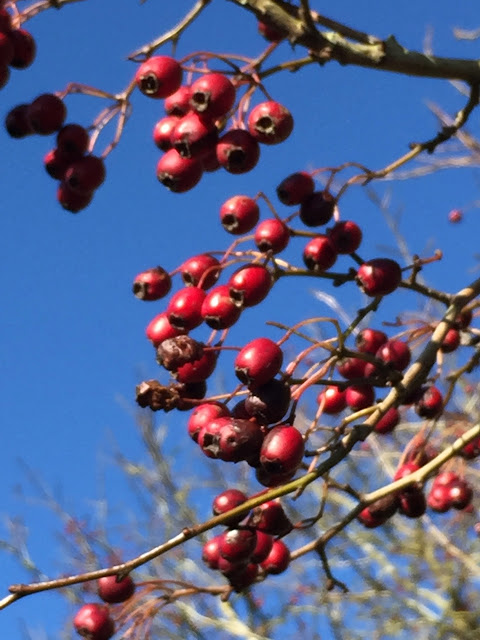 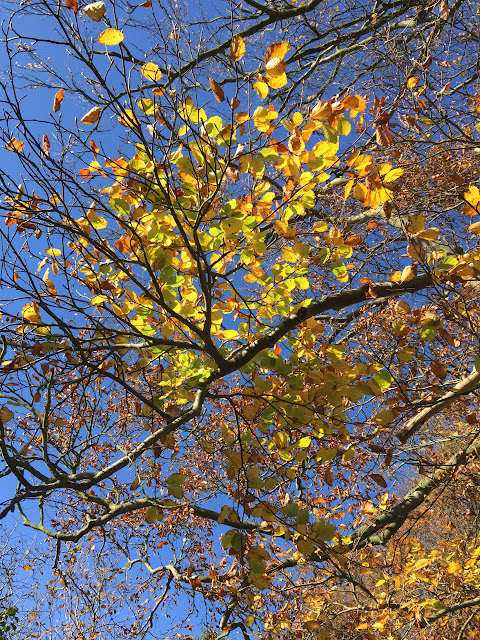 The sun hasn't been shining every day but on Wednesday, after being shut up in a very boring meeting all morning, I seized fifteen minutes to walk from where I had parked the car. 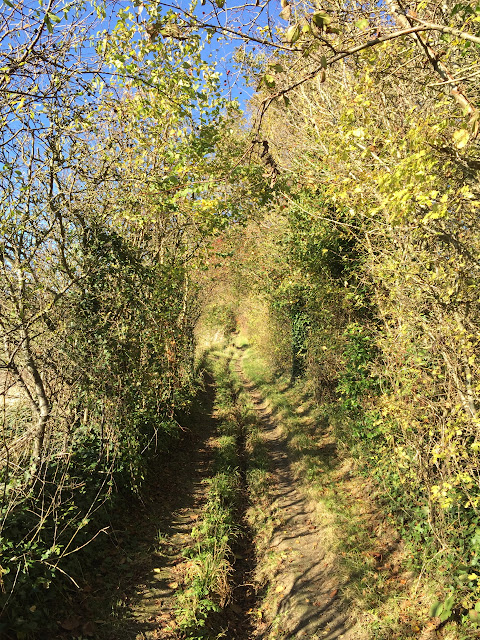 It was gloriously bright and a real tonic against the dying of the light. 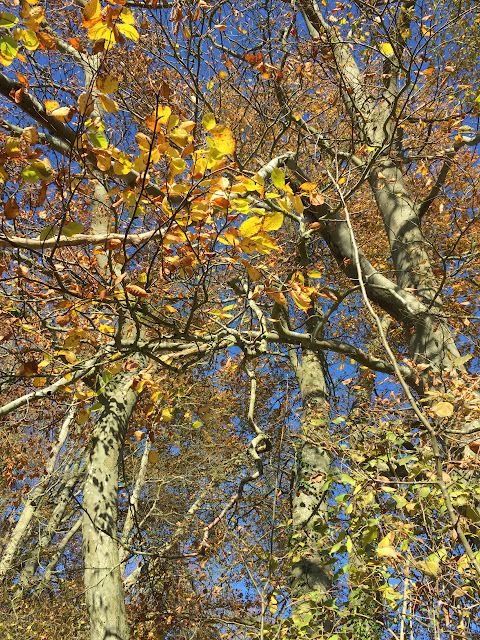 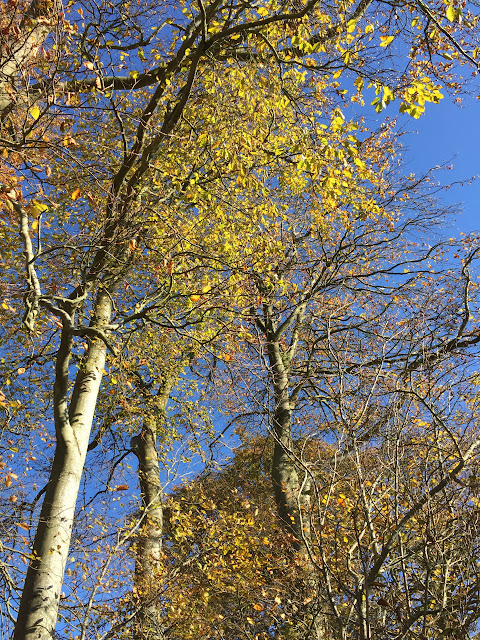 Among my other intentions was cleaning something additional to my normal routine cleaning, every day, which may sound a funny choice but I've found it's also really helped combat that increasing feeling of dingy gloominess that can hang about in November. I started with the study windows which hadn't been cleaned for quite a while, I fear. The sun, when it is out, now streams through, unfiltered by the previous veil of dirt. A good (and cheap) way of making the most of what little sun there is, even when one has to be inside.

And for a quick lift to the spirits, I open what was the old coal cupboard and view the results of my preserving activity over the summer and early autumn. 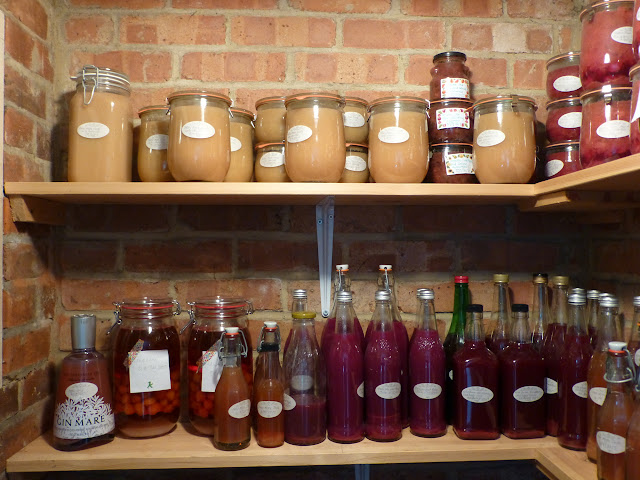 This year, I've got into bottling foraged and home-grown fruit in a big way. My birthday presents this year were a boiling-water-canner and a load of Weck preserving jars as well as some marvellous, thickly-insulated, crinkly, green rubber gloves that make me look and feel like a crocodile - I love them!

I also love the fact that fruit bottled in the old fashioned way is not dependent on electricity for storage. There is no way I could have squeezed all this fruit into my freezer anyway. 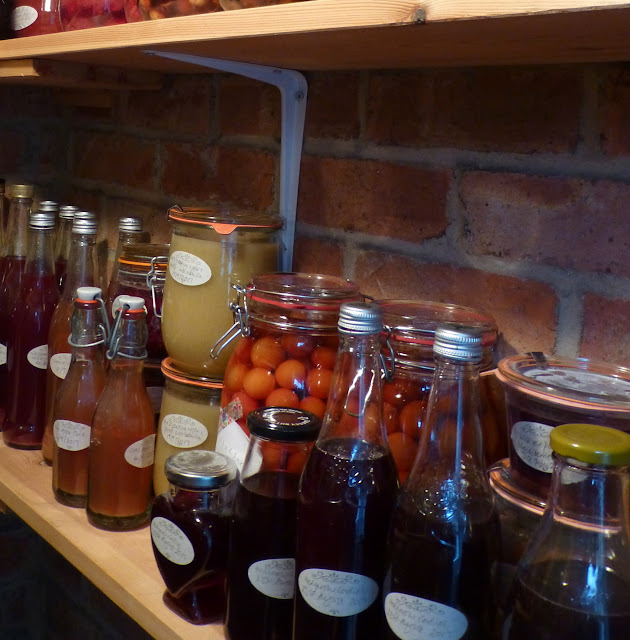 What do we have here?

Quite a lot of jars of unsweetened apple purée, with or without vanilla - faller apples, washed, chopped, bruising removed and then cooked with a small piece of split vanilla pod and some water until soft and then put through the mouli, reheated and bottled - very good for breakfast or a quick, simple pudding with some cream or custard. 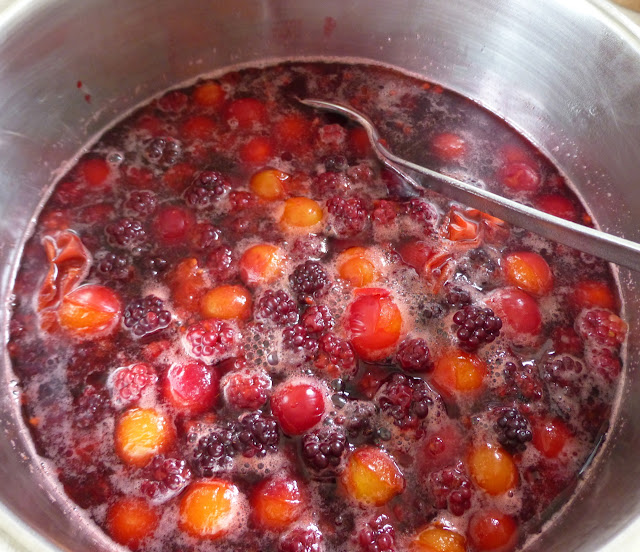 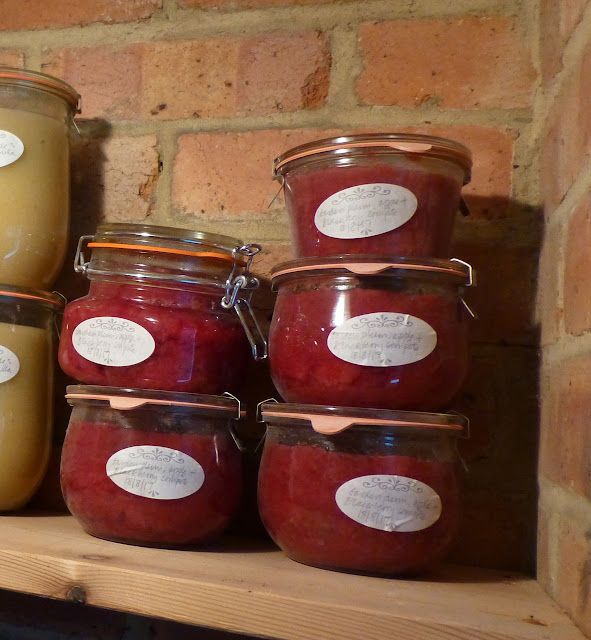 A few jars of rhubarb compôte - rhubarb baked in the oven in its own juices with soft brown sugar and then bottled.

A handful of jars of damson and cobnut mincemeat. A new-to-me recipe to use up a glut of hedgerow damsons. Tasted exceptionally good when I made it and I am hoping it will be equally good in mince pies at Christmas. It has no fat in it at all which I like. I omitted the brandy as I was heating the mincemeat up in the boiling water canner and thought the heat would evaporate the alcohol so I will add a little when I make the pies, if it's rather thick. You can find the recipe here although the damson season is long over, here in the UK.

Some large ex-gin and ex-tonic bottles of damson and apple juice - the juice steam-extracted from foraged damsons and faller apples and then bottled, unsweetened. I use this to make jelly, as in "jelly-and-ice-cream-jelly", but you could also use it to make "jelly-on-toast-jelly" with more sugar and longer boiling. For four light and healthy pudding servings, I use 6 leaves of gelatine and a bit less than 50g of sugar to a pint of this juice. Not quite so light and healthy if you add cream or ice cream, of course! Or if you feel the need to serve homemade hazelnut shortbread with it!

Some smaller bottles of plain crab-apple juice - steam-extracted and unsweetened, before bottling. I will use this in bread-making or to add to jam-making next year with soft, low-pectin fruits.

Hedgerow cordial - an assortment of foraged fruit - blackberries, elderberries, hawthorn berries, rose-hips, faller apples - the juice steam-extracted and boiled up with some sugar and bottled as cordial. 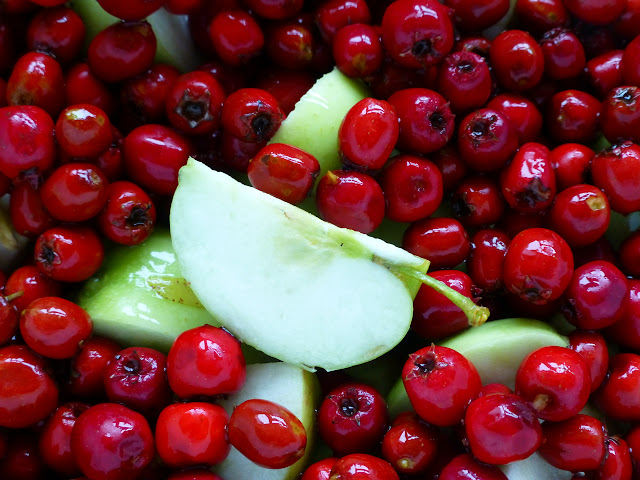 I pour this (mixed with a little blackberry gin) over those bald patches you sometimes get when you turn out a summer pudding, or dilute it with hot water to drink, if anyone has a sore throat.

Four very large Kilner jars of Russian wild plum liqueur - wild red plums, sugar and vodka, macerating slowly since the summer, prior to filtering and pouring into bottles for Christmas gifts and drinking.

Two jars of what will hopefully be homemade Frangelico - vodka, toasted hazlenuts and a split vanilla pod. This is an experiment so I don't know what it will taste like. It will need sweetening as at the moment it has no sugar in it - I must remember that, before I bottle it up and taste it / give it away at Christmastime.

So far, this little lot, (and a few related tubs in the freezer when I ran out of bottling jars), has meant that I have bought no fruit at all (apart from oranges and grapefruits, for juicing) since the beginning of August. It is saving me a fortune as we eat quite a lot of fruit and it's proportionately quite expensive, week by week.

But the cost-saving satisfaction is as nothing compared to the satisfaction I get every time I peep inside the cupboard and look at the serried ranks of jars, quietly sitting in the dark, cold silence like Benedictine monks at Compline, or take a jar back into the light, warm  kitchen and open it with that satisfying hiss, as the vacuum seal is broken for the first time. It's a deep primeval satisfaction that comes from knowing that there is summer goodness and light in there, preserved and stored away, to draw on and nourish body and soul in the dark weeks of winter ahead.

Do you have strategies for keeping the autumn / winter darkness at bay? Or doesn't it bother you?

Posted by Thomasina Tittlemouse at 11:43 6 comments: