Making My Way Into Autumn Via Aprons and Apples

So it's September. And the summer is gone. The swallows knew it weeks ago and had made themselves scarce before August struggled to its bedraggled end here, but I've been slower to catch on, I think. Sometimes the ebb and flow of life sits harmoniously alongside the ebb and flow of the seasons and sometimes it doesn't and I find myself trying to catch up, slightly out of synch. I've found that recently anyway.

There are special joys to be found in September even though I find the deep golden light that is characteristic of a nice day at this time of year somehow carries a feeling of melancholy that always makes me feel wistful.

I've not wanted to go looking for any extra melancholy and wistfulness however and have been concentrating instead on the uplifting qualities of the following: 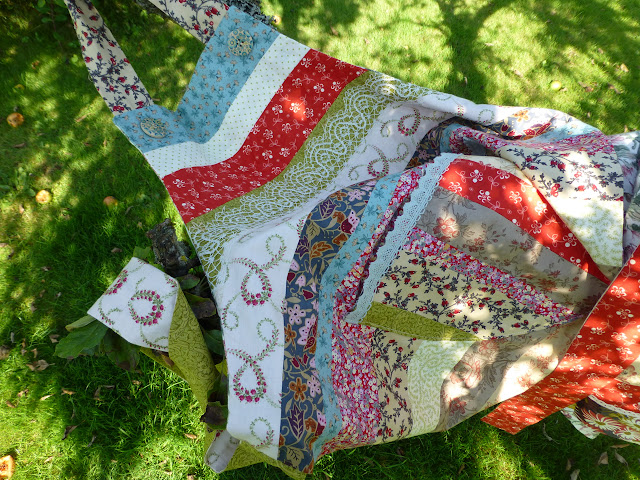 1 A new sewing project that was originally going to be a one-off but looks as though it might be set to replicate itself, possibly more than once. It started with me playing around with bits of fabric from my fabric boxes that were having some difficulty closing. They seemed to me to murmur a little autumn poem. 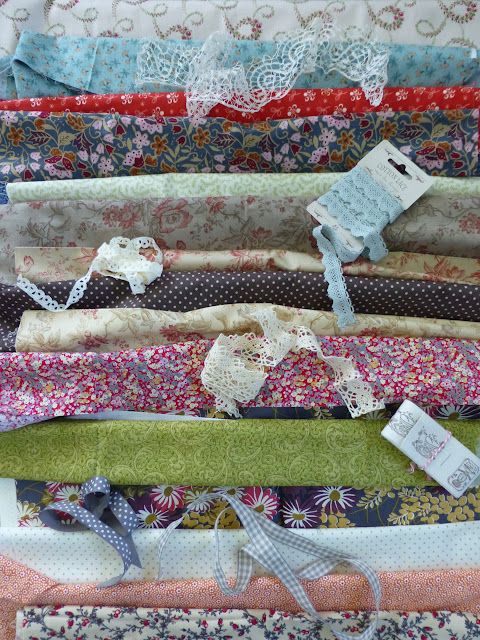 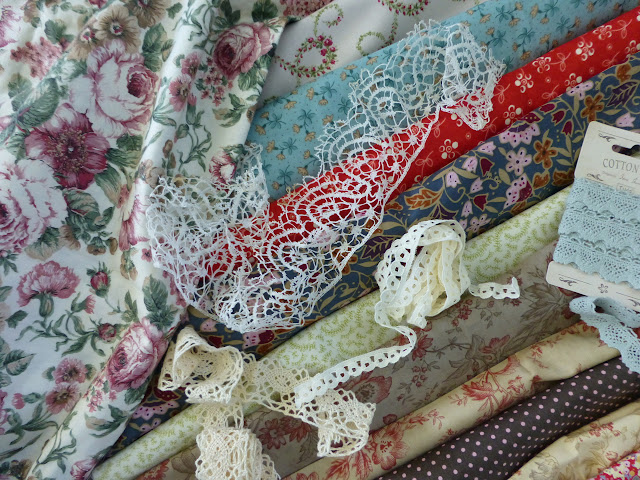 Then I unearthed a bunch of old lace and trimmings that have sat in my sewing basket for years. Some of the lace, like the two bits, in the bottom centre of the pic above, have lain there for at least forty years, to my certain knowledge. And a happy idea was born to make an autumn apron out of strips of all these fabrics, sewn together, and trimmed with the oddments of lace. The plan was to evoke some of the browns, russets and hunting greens of autumn leaves together with the filigree adornment of those lacy spider-webs, you see in the garden, beaded with dew on early, autumn mornings. No, I was not tempted to add an embroidered eight-legged resident or two! 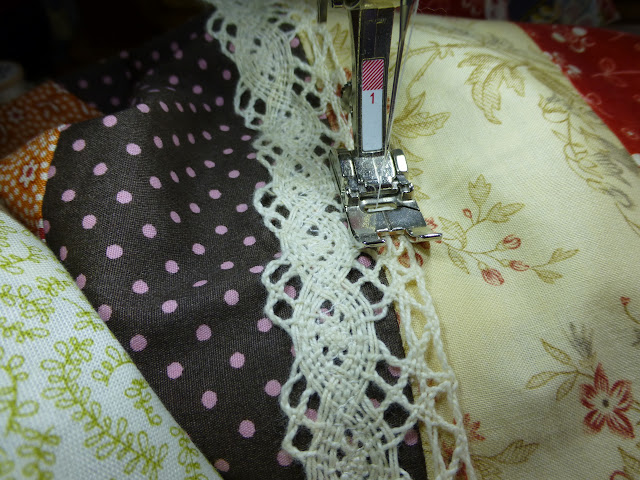 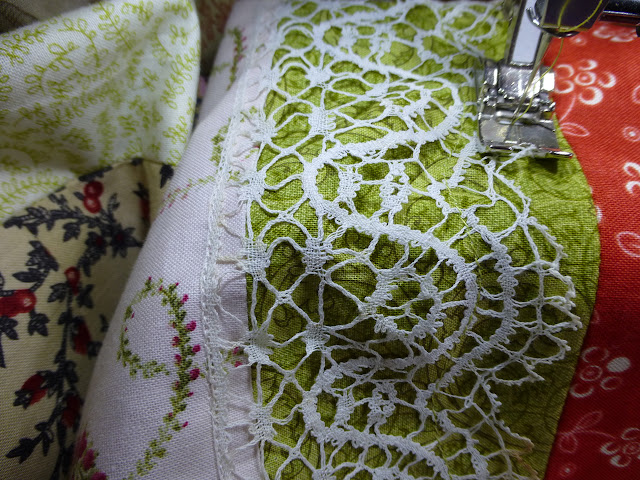 There is a nice large pocket sewn out of the off-cuts, with the strips going vertically, instead of horizontally and the top edge of the pocket is trimmed with a bit of grey lace. 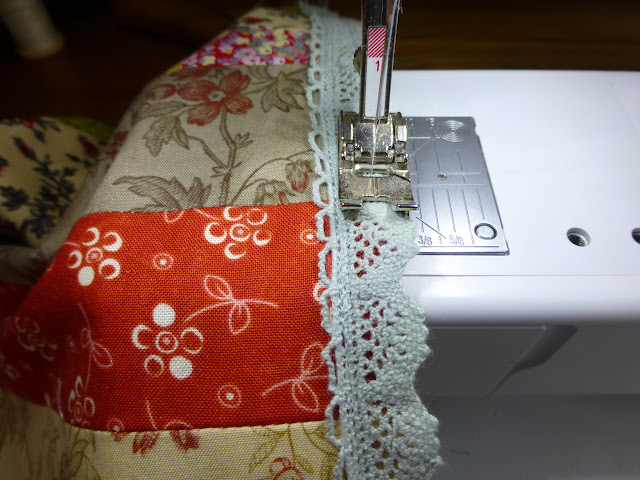 A pair of wooden buttons (that came free, a while ago with an issue of Simply Crochet, I think) finish off the top. They are purely decorative but I like them. 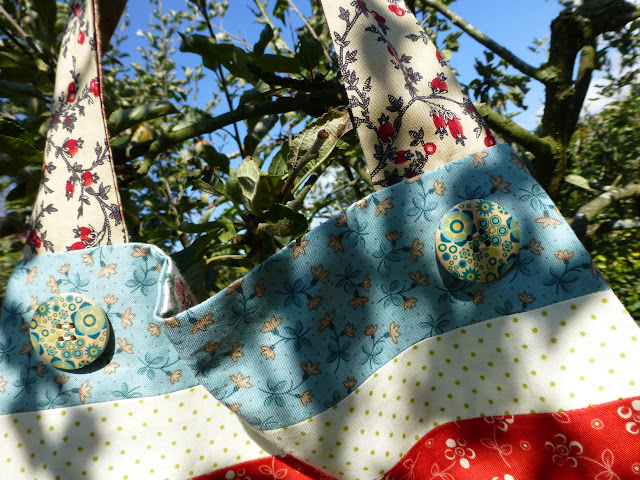 To hide all the seams and to give the apron a bit of extra strength, it's lined with the cream, dusky pink and soft green fabric that you can see  in the pic below, where the apron is turned back. It reminds me of end of-the-summer roses lingering in the September sun - still blooming but in slightly more muted tones than those of June. 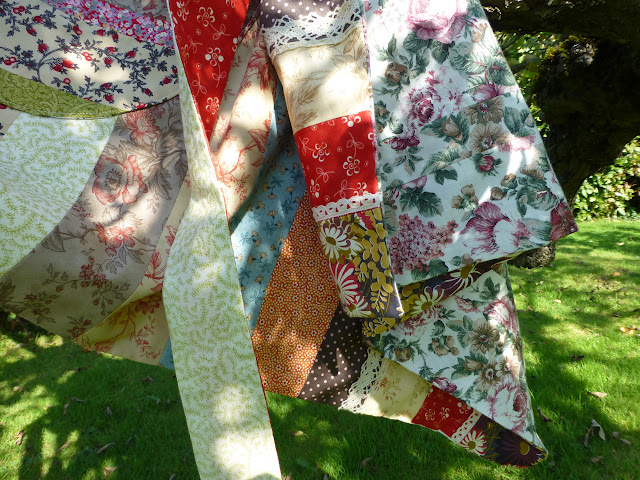 The ties are deliberately mismatched; stitched together using two spare strips for each, before turning out and pressing and sandwiching between the outer and the lining fabrics to secure them in place. 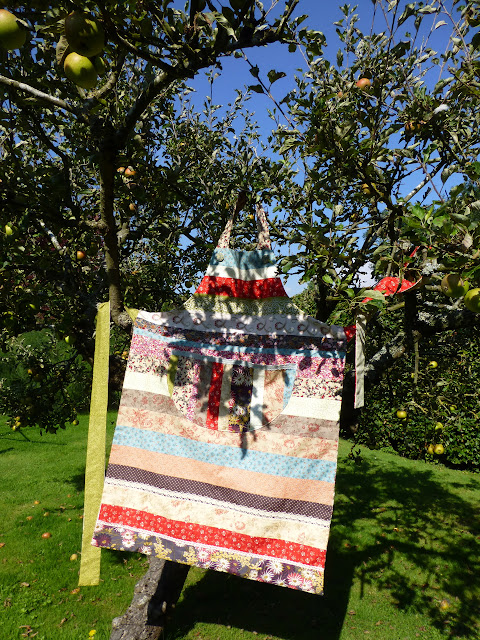 Almost all the strips are pieced together, some in several places, as I only had a few fabrics in large enough widths to cut the strips in single pieces but that doesn't matter - it's part of the joy of the thing that it's been made from odds and ends. It's been a delightful, frugal make that has made going into the autumn seem a good deal more appealing.

2 Baking with berries from the hedgerows and pears from a friend's garden. 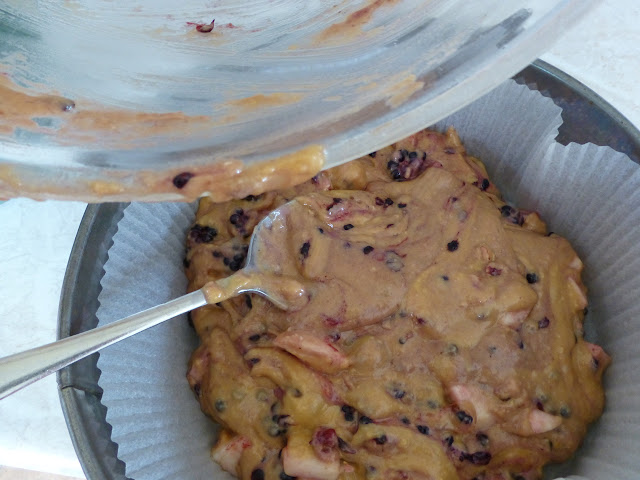 It's a tweaked variation of Ruby Tandoh's Pear Blackberry and Coconut Cake which was featured in The Guardian last weekend. I tweaked it by replacing the coconut oil with almond oil and the desiccated coconut with ground almonds to make a Blackberry, Pear and Almond Cake. 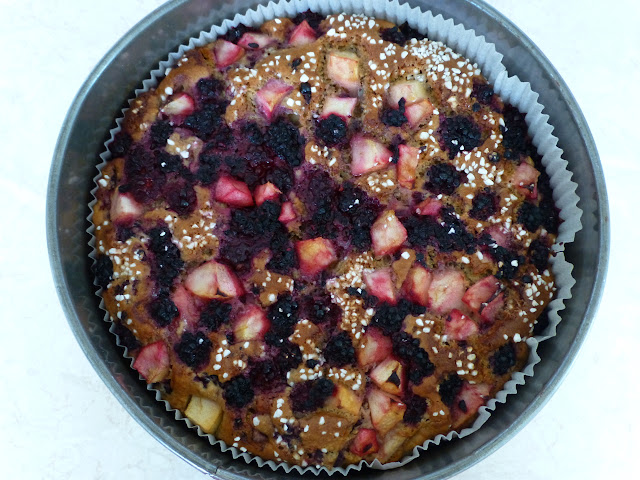 I do like cakes made with oil that only require you to get out a whisk and a bowl rather than the whole faff of the food processor. Life is never too short to make cake, I feel, but sometimes, when time is short, a quick cake-making fix is better than a long one!

3 Drying apples from our elderly apple tree. It is so weighed down with fruit this year that I am wondering whether it needs crutches under its low-slung branches. Most instructions tell you to dry apples in slices but I want chunks for using in bread, porridge, buns and cakes over the winter. 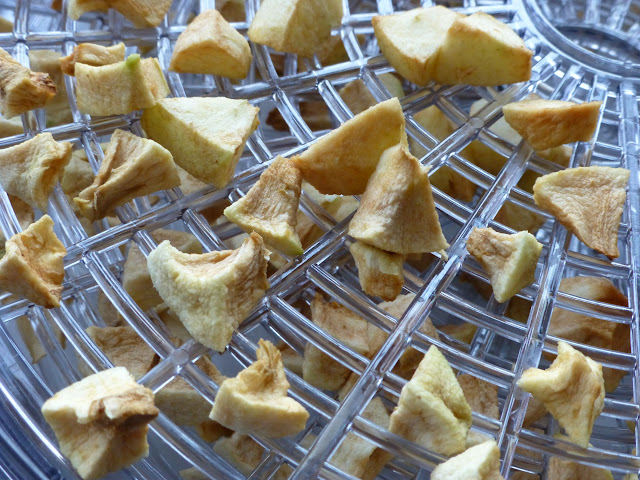 I haven't treated the cut fruit with acidulated water or anything so it's inevitably gone a bit brown in the drying, 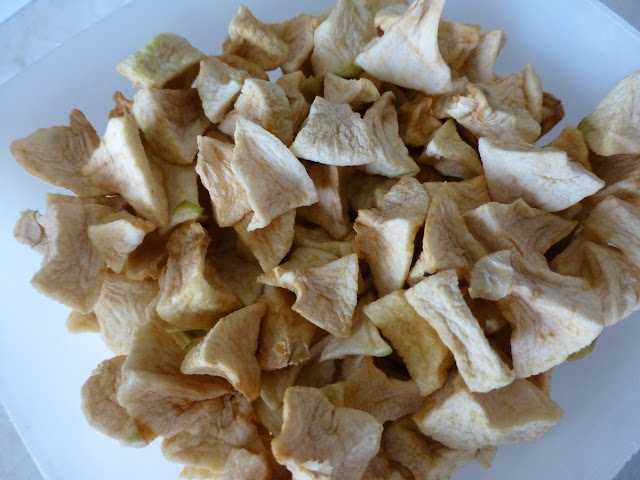 but that doesn't worry me - it's the flavour and consistency I am after, particularly for adding to bread recipes where fresh apple is too wet and too fragile to hold together under the kneading process. I could probably have dried these a bit longer but I don't want them too leathery, as an ingredient, so I'm freezing what I am not using immediately, in case they have not lost quite enough moisture simply to store in jars, or paper bags, in the larder. An initial experiment in using them in these spiced apple buns promises rather well - the apple pieces remain definite but are neither hard nor dry and the apple flavour is very good. 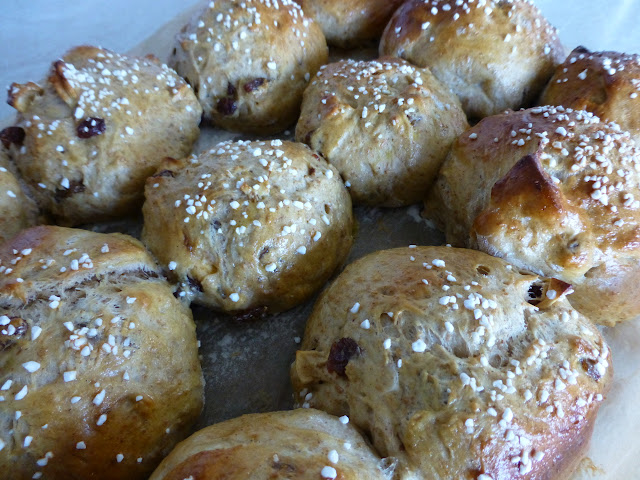 I am making a lot of these kinds of fruited, yeast-raised buns at the moment - they satisfy my need for something sweet to nibble on around 4.00 pm without being too heavy on the old sugar (and fat). They would also be rather good in lunch-boxes should you find yourself needing to fill same or, for that matter, lightly toasted for breakfast.

If you want to have a go, my recipe is as follows:

For the glaze: 1 egg whisked with a teaspoon of water
pearl sugar or demerara sugar to sprinkle on top

I've used an assortment of spices that I think go well with apple - I've got a particular fondness for ground mace at the moment which I think is made from the outer casing of the nutmeg seed. Its taste is similar to nutmeg but slightly warmer and stronger. It works very well in breads like this one anyway. But you can vary the spices according to what you like / have in the cupboard. The same applies to the fruit. You can change the make-up of the liquid as well, so long as you end up with the about the same quantity of liquid overall so feel free to use all milk and no water and one egg rather than two if that suits you. Some egg and some milk is needed though so I wouldn't simply replace with all plain water if you want the same tender-crumbed results, especially for eating just as they are.

I make the dough for these buns in my automatic bread-maker on the wholemeal raisin dough programme. Not all the fruit will go in the fruit-and-nut dispenser of my machine so I just add the extra by hand when I hear the portcullis-like trap on the dispenser fall and know that the automatic hopper has released its payload at the right moment. You can, of course, make them by hand following any fruited bread or hot cross bun recipe for the method.

Once the dough is risen and ready, preheat the oven to 200 C (195 C for fan ovens). Shape the dough gently  - it's quite loose and tender - into twelve nice, round, cushiony buns and place on a baking sheet lined with baking parchment. Brush each one with the slightly diluted, beaten egg and sprinkle with pearl or demerara sugar. Bake for around 13 - 14 minutes until well-risen and golden. Watch them carefully towards the end of the baking time to make sure they don't overcook. You might need to turn the baking tray around if some of the buns seem done before the whole tray is ready. 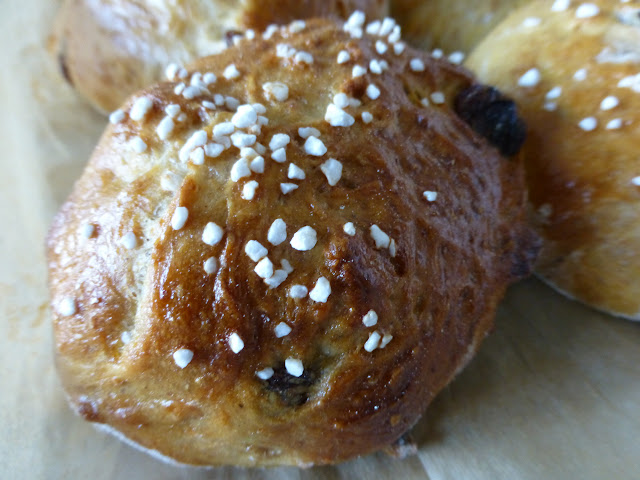 Cool the buns on a wire rack before eating just as they are ... 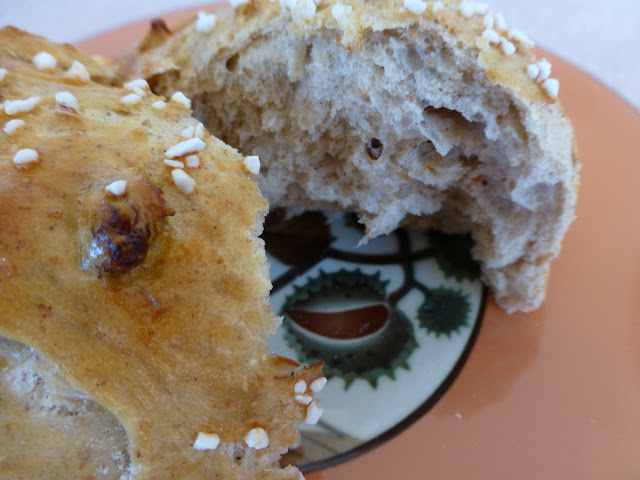 ... or may be with a bit of unsalted butter. Any leftover buns freeze beautifully.

4 Mastering a knitting pattern for a vintage-style tea cosy for my big enamel teapot that pours beautifully but is too big for any of my existing tea cosies. There's a gorgeous pattern in Handmade Glamping for a tea cosy like this made with five colours, rather than just two, but I got in such a pickle trying to follow the (somewhat elliptic) instructions and keep five balls of yarn separate and in the right places that I gave up and found a simpler pattern for the traditional two-colour version here. 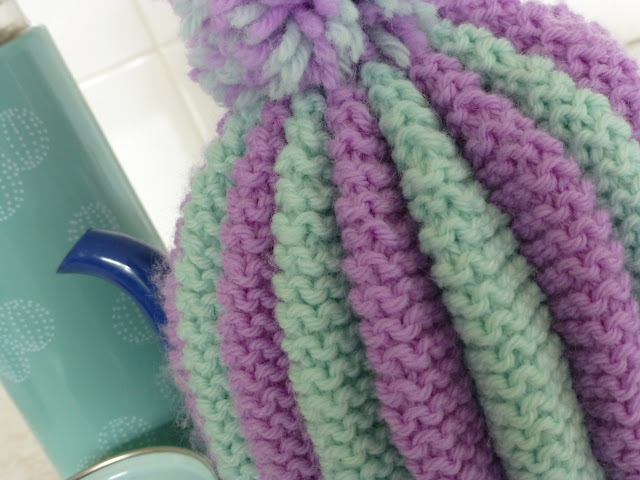 I love the Handmade Glamping book, it's one of my favourites and full of inspiration but I do find the technical instructions for how actually to make the projects are sometimes insufficient. It's fine, if you're fairly confident with the required crafting skill and can supply what is not explained from your own experience but trickier if you aren't. And with knitting, I am not at all confident, and should only really be let loose under the watchful eye of a minder! 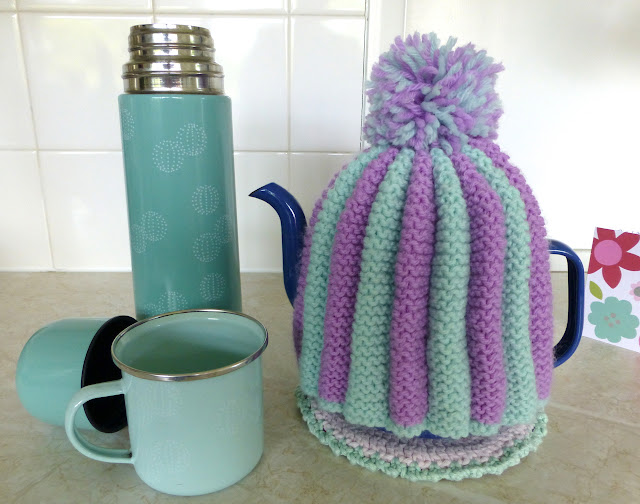 But this has, in the end (and perhaps despite me), worked OK. It keeps the tea as hot as can be. The design of these vintage-style cosies with their self-pleating folds, means that the teapot is effectively wearing something like an eiderdown, with a pocket of insulating air trapped in each fold. Perfect for brewing up tea to go in a flask, without the tea losing its heat, as well as keeping a pot of tea alive and well, some time after making it, even when you're not "taking it out." Do you use a proper teapot and a tea cosy when you make tea? I'd got rather lazy and had fallen into bad tea-bag-in-a-mug habits that were quite wasteful really, both of electricity and tea.

5 Photographing my late summer sunflowers in the early morning sun which despite being planted quite late, have come good and cheered these late summer / early autumn days with their wonderful, yellow, mop-like heads. 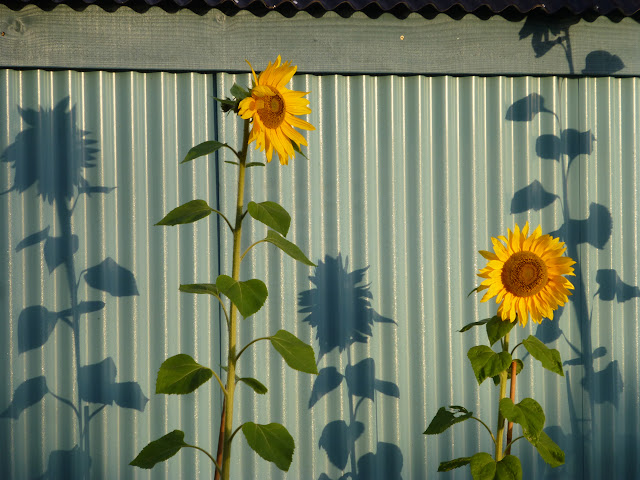 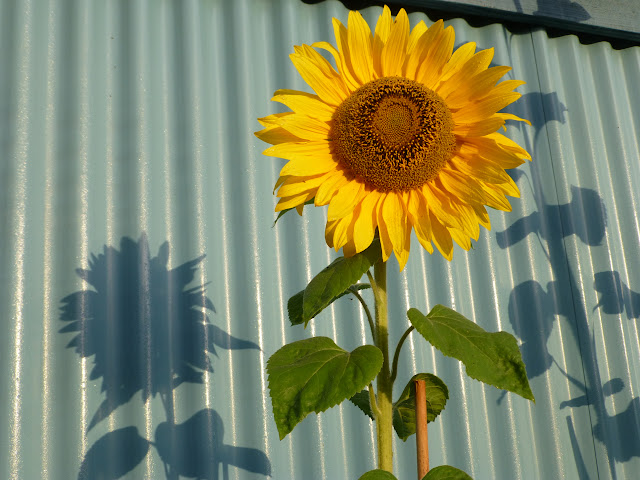 6 Changing up breakfast a little by switching from porridge to a very simple, but oh-so-good, homemade granola. Just oats and chopped almonds turned in maple syrup, honey, vanilla extract and a spoonful of rapeseed oil and baked on a tray in a slow oven before being cooled and nibbled, stored in a large jar for quick and easy, nutritious breakfasts served with with ice-cold, unpasteurised, whole milk. Absolutely deeelicious and popular with the whole household. 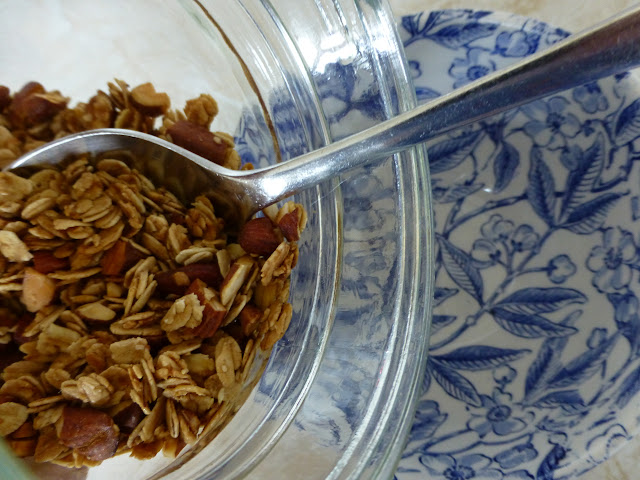 And hopefully providing momentum for navigating the rest of the autumn,
regardless of what falls from the trees,
either literally or figuratively.

Posted by Thomasina Tittlemouse at 17:27 22 comments: