Lots of people, these days, seem to choose a word, or a phrase, as a kind of motto, or talisman, for the New Year. It's rather an appealing idea and I've been toying with a few. Some of them more frivolous than others.

I wondered first of all about taking a leaf out of Marie Antoinette's book - something along the lines of "Let me eat cake!" but that seemed a bit greedy and, actually, I intend to eat cake a-plenty whether or not I've adopted a cake-eating motto.

Next, I considered something a little more serious and dynamic such as "flow" - a lot of change, potential and actual, lies ahead this year and I need to be able to move with the tide of life, as it ebbs and flows. Not something I shall find all that easy, I suspect.

In the same vein, I considered "open" - both as a verb and a description of a static state. Opening doors and windows to move forward and to sniff the wind and the weather outside in a figurative sense. Being open and receptive to what the year and life may bring.

Both of these possibilities had the virtue of simplicity, being single words. I'm not sure why, but, simplicity notwithstanding, neither seemed quite right. And then H and I went to see "Bridge of Spies" on Monday. I saw it for the first time before Christmas actually, but it's still showing in Oxford, so going to see it again made a nice end-of-the holidays-outing.

There is a catch-phrase that comes up in the film - "stoikiy muzhik"* or "standing man" in Russian, with  associations of endurance, patience and persistence winning through against unlikely odds. I am not sure I am a natural "stoikiy muzhik" - I am too inclined to bustle and flit and let's admit it, panic!, but in an odd sort of way, the slight unfamiliarity, even strangeness of the concept makes more sense to me, on the threshold of this year than anything else. After all, there's no point adopting a motto that doesn't remind you to do things slightly differently from how you would have done things anyway. So "stoikiy muzhik" it is. I expect, as Russian is an inflected language, there's a feminine form for "standing woman" which would be more appropriate for my purposes but I'm afraid I have no idea what that would be.

* I have no idea either whether I've transliterated this correctly from what I heard in the film. If anyone, reading this, speaks Russian and can correct me, or indeed supply the feminine version, please do so!

It's perhaps not a very glamorous motto, I grant you. Even in the film, the phrase is originally applied to someone "who never did anything remarkable". But that unremarkable someone survived when perhaps otherwise he wouldn't have done and the lawyer to whom the phrase gets transferred in the film proves that being there; being yourself; waiting out the to-ings and fro-ings of events; refusing to blow with every wayward gust of wind; those things have a worth and value that it's easy to underestimate or overlook.

It's not a pretext for remaining static or failing to move on. That would be a poor motto indeed for handling the inevitable changeability of life, in this year or any other. But it is a reminder to keep faith when the ground feels unsteady or treacherous, figuratively speaking. It's a reminder to hold a steady course, rather than give up because there is a cross-wind or it has started to rain, metaphorically. It is a reminder that as human beings we are precious primarily because we are here, not because of what we achieve or even aim to achieve. It may of course backfire on me and I may find it helps me not a jot. But it may just find me at the year's end standing, like Tom Hanks on the Glienicke Bridge outside Berlin, with a certain peace of mind and heart and with more gained than I imagined would be possible. And that seems to me worth aiming for.

I doubt that 2016 will see me continuously display the serene aspect of my Russian matryoshka doll here, but you never know! Here's hoping! 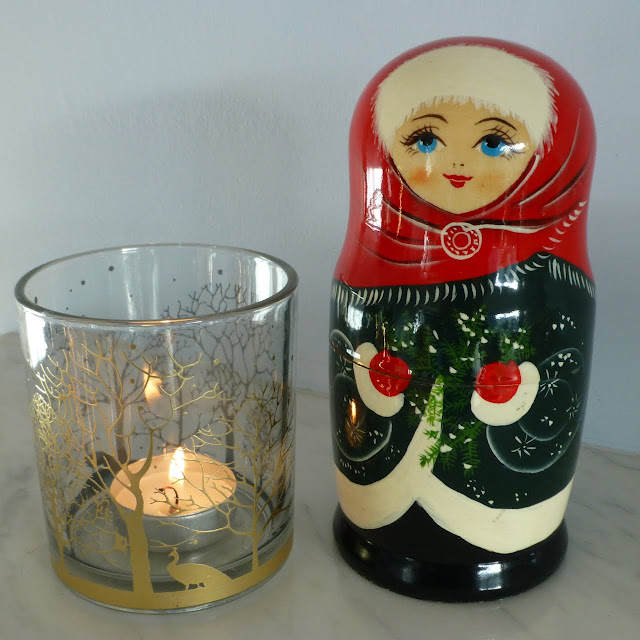 Do you adopt a motto or word at the beginning of the year? If so, what's your chosen one for 2016?


Wishing you the best of health and happiness for the year ahead,
E x

Posted by Thomasina Tittlemouse at 14:32 22 comments: