What do they say? Moving house, retirement, divorce and bereavement are some of the most stressful events most human beings undergo. In the last month, I've been hobnobbing with two of them. Not divorce or bereavement, thankfully, but I have retired early from my full-time, six-days-a-week job and we have moved house.  For the first time in more years than I care to count, we live in a home that is our own, rather than in accommodation tied to my job. The tied accommodation has been a mixed blessing - superficially, a substantial part of the remuneration package for my job and generously sized, inside and out, it ought to be a wonderful bonus, but it has entailed not just living over the shop, but in the shop; and being at the beck and call of work demands 24/7, 365 days of the year takes its toll, after a while. It affects your relationship with your home quite fundamentally, actually, in that it never quite feels like home, or not in the way that a home independent of any work you might do, does. It's hard to explain but if you have ever lived in tied accommodation yourself, with working hours which never have any clear cut-off point, you may know what I am getting at.

Our new home is old. As in, very old. It was originally built around 1430 when Henry VI, the scholarly king who founded King's College, Cambridge and Eton College, was on the English throne. 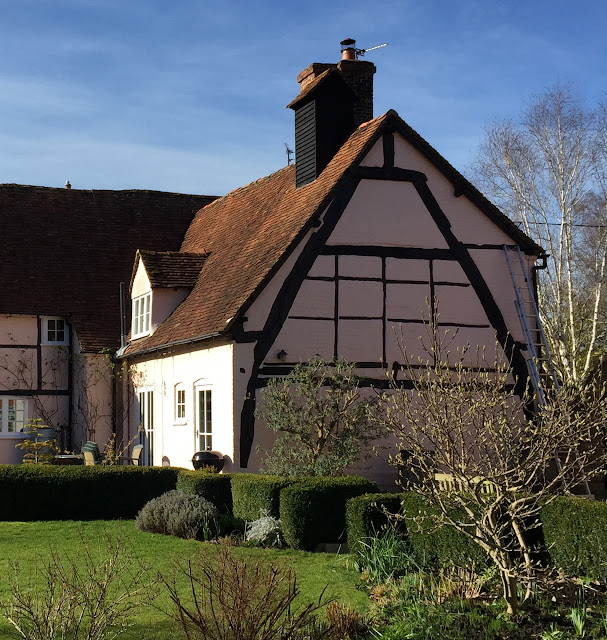 It has been added to quite a bit over the years but the original beams that make the A-shaped, so-called "cruck frame", that you can see in the pic, come from oak trees that were acorns around 700 years ago. You can see the Medieval adze marks where the beams were hewn and shaped by skilled craftsmen with basic, 15th C hand-tools. A modern builder with an electric chain-saw today would be hard put to emulate their even work. There is a wonderful peace about coming to live in a house as old as this. It was here long before the beginning of the century in which I was born and it will still be here, (Deo volente), long after the century in which I will die. We are stewards of it for a precious space and hope to slot into a happy belonging that can work alongside its history harmoniously.

It is a complex, quirky house. And like a complex person, it will take time to get to know it properly. I love that. It is as if it is a living, breathing member of the family with its own personality, foibles and preferences. It is alive and full of the presence of past centuries. Not in a sinister way - always a risk with very old houses - but in a warm, gentle, companionable way. It's a house that quietly, shyly reaches out and embraces one. I feel as though a great millstone has rolled off my shoulders and I can finally breathe again, after a long time. A good feeling.

Moving house has not just changed the internal landscape of the place that is home but has opened up a whole new external environment and that too will take a bit of getting to know over the coming months, even though we have only moved a few miles from where we used to live.

The landscape is steeped in a thousand years of history although obviously, it looks very different from the days when Scandinavian invaders battled in bloody hand-to-hand combat up on the downs but in the bright, bitterly cold, early morning light when no one else is much about, one can just imagine watchmen scanning the horizon and seeing the approach of Saxon swordsmen across the plain below. 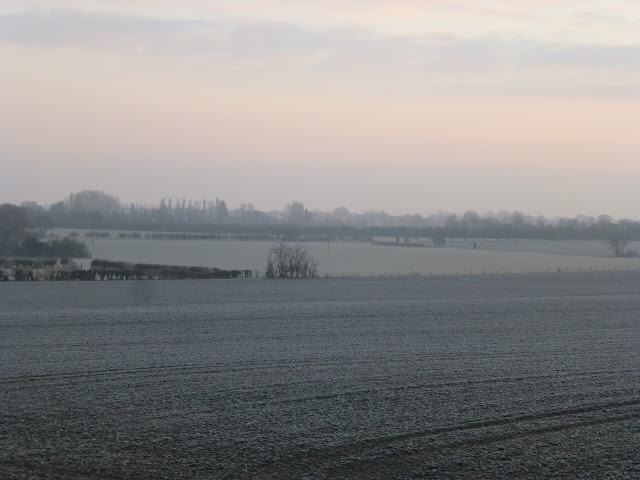 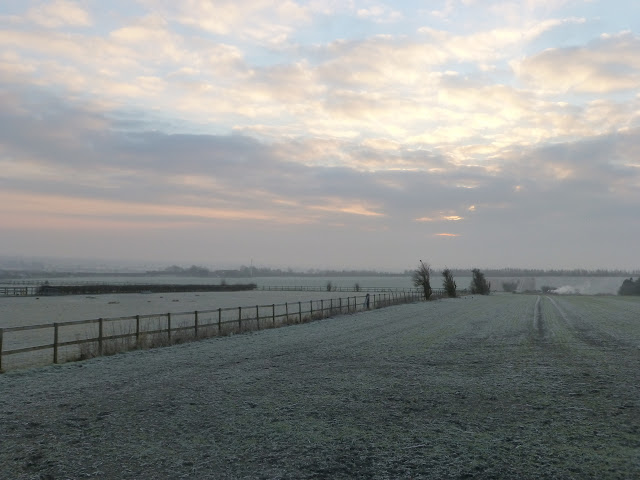 Today there are no battle cries, only the whistle of a lonely red kite circling over head and the distant murmur of the A34 winding its way up and over the crest of the hill in the distance, but it's not hard to lose touch with the 21st C up here. 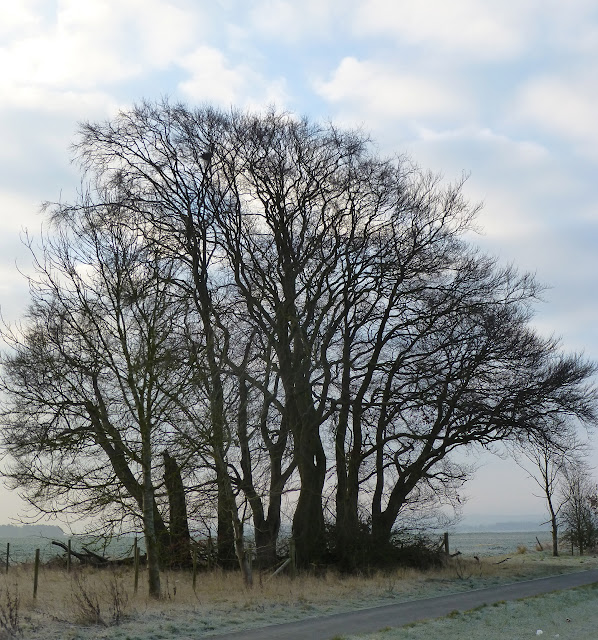 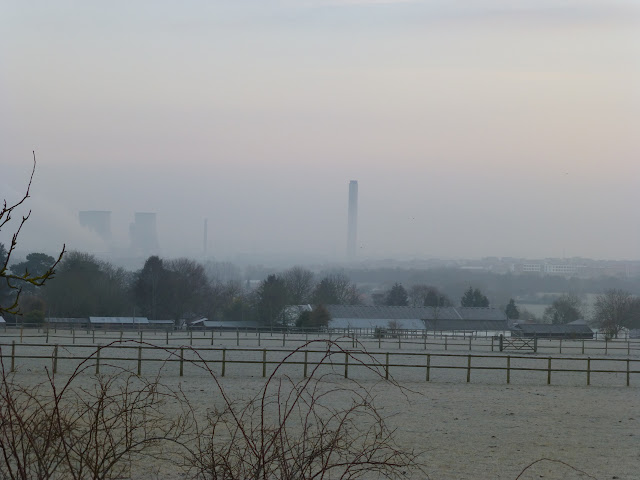 One of the great gifts of reaching out for history in any place, is that sense that, yes, we and our lives and concerns matter, today and tomorrow, but in the grand scheme of things they are only a small part of something much bigger. I find that freeing. Comforting and freeing. Doesn't get us off the hook of responsibility but gives a longer, more balanced perspective on everything which fosters a degree of serenity that is often lacking in modern life, I find.

The bantams have acclimatised to their new home very happily and are giving the local invertebrate population a hammering. It would be nice if they would start laying again though, rather than just eating their own weight in worms and woodlice and digging up our new flower-beds! 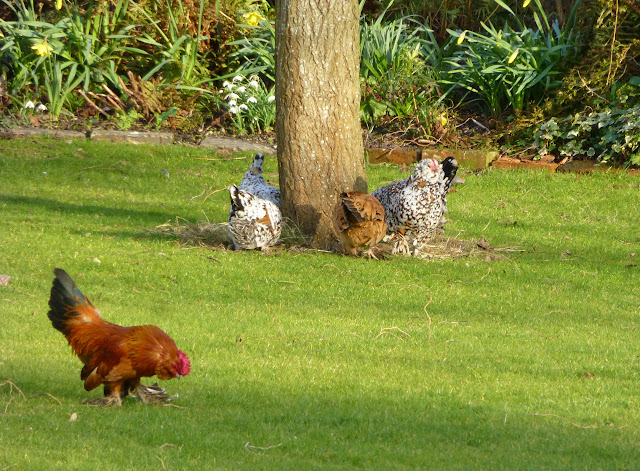 Vladimir, the cockerel-who-was-meant-to-be-a-hen-but-turned-out-not-to-be, is On Watch, as his dulcet tones are an acquired taste at 5.00am and we are on tenterhooks in case one of our new neighbours comes round to complain about him. So far, he's got away with it, but I am not holding my breath. (Nor is he, unfortunately!)

D, in a fit of enthusiasm, sent off for a "rooster collar" from the US which appears to be a sort of velcro collar thing that you can fit to noisy cockerels which harmlessly restricts the amount of decibels they can put out. A good idea, in theory, but Vladimir is a feisty and belligerent character who regularly has an aggressive pop at my pink wellingtons, which he regards as a sinister threat of evil intent, when I go out to shut the bantams safely in, at night. And when I asked D how we were going to fit said collar, he said, somewhat sheepishly, that if I would hold him, he would fit the collar. I am afraid the prospect of holding Vladimir securely while D fits a probably highly uncomfortable, velcro collar round his neck, to which he will, almost certainly, strongly object, is not one to which I am instinctively drawn!

Any suggestions of alternative advice for reducing the impact of crowing cockerels (excluding coq au vin) will be gratefully received!

Posted by Thomasina Tittlemouse at 09:14 6 comments: