Both the Scots and the Russians have got the art of surviving and thriving in a long, cold winter down to a fine art, although of course, Russia's cold makes Scotland's look like amateursville. 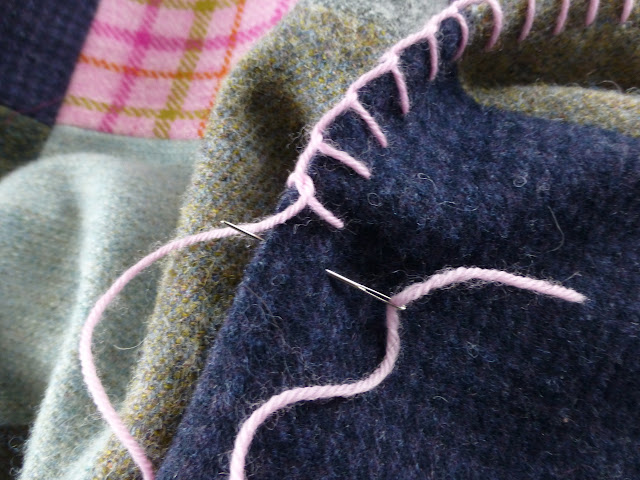 I broke from my moorings to go to Russia for the first time in November last year. It's where I discovered just how perfect Scottish tweed is for wearing in seriously cold weather. Those tweed skirts I made - I lived in them all day, every day.

This is the only pic I have in evidence - taken in Elisaeev's Food Hall -  an enchanting food emporium in St Petersburg - a bit like London's Harrods Food Hall or the 6th Floor of KaDeWe in Berlin but on a much smaller, more intimate scale. If you are ever in St Petersburg, make a beeline for this place - it's delightful. You can't see the detail of the skirt I'm wearing terribly well - but it's the dark green lovat tweed one, worn over boots and under a quilted jacket - perfect for going between snow and ice outside and well-heated interiors inside, without freezing or sweltering. 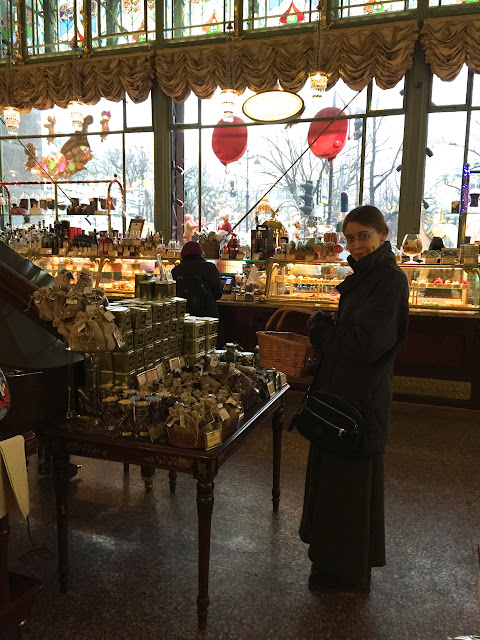 Despite temperatures in St Petersburg in November of -16 C or so, I can honestly say I was never cold. I am not sure how I would have fared in January or February when temperatures drop a lot further but I am optimistic that the tweed would have held up.

February in Oxfordshire in southern England can't compete but it has nevertheless been quite cold and my goodness, my tweedy blanket has come into its own. I finished my tweedy patchwork and it's been in use ever since keeping me beautifully, but never stiflingly, warm - that wonderful breathability of wool that is so user-friendly. I say "finished" but that's not strictly true from a purist perspective. I finished the patchwork and then couldn't decide about the backing so I left it unlined and if you turn it back, yes, you can see all the seam allowances. But the fact is that you don't turn it back in normal use and I prefer the lightness of it, as it is. I also have an eye on cleaning it, at some future point. Anne suggested that tweed fabric can actually be hand-washed using Eucalan, avoiding the need to dry-clean at all. If I do that, I don't want the extra weight of any lining fabric pulling the tweed out of shape as it will be quite heavy enough on its own, once wet. If it shrinks a little, I shan't worry - plenty of scope to lose an inch or so, should it come to that.

I am going to wash a sample before I immerse my tweed skirts in water as, obviously, with a fitted garment there isn't the scope to accommodate shrinkage but the blanket is different. 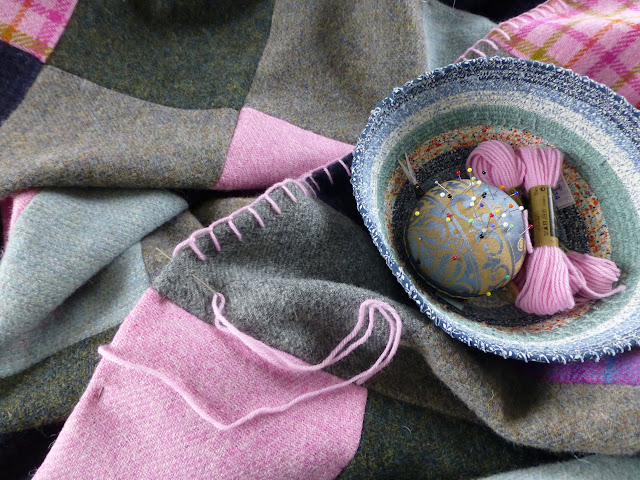 I finished the edge with a traditional blanket edging in old-fashioned blanket stitch and, well, it looks like a proper blanket! 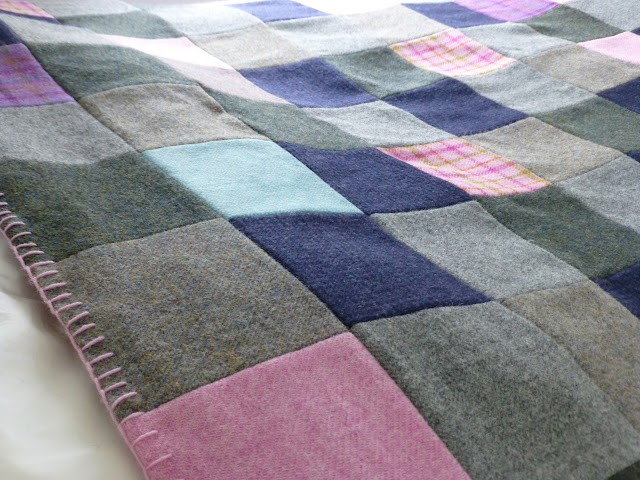 It is a proper blanket! 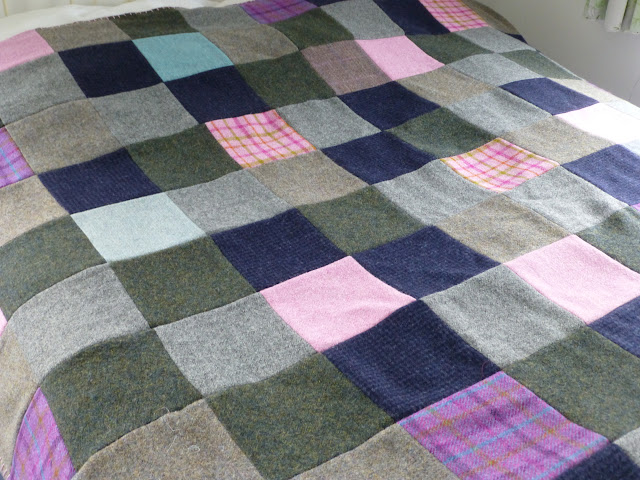 Made almost entirely out of scraps, as per my previous post. 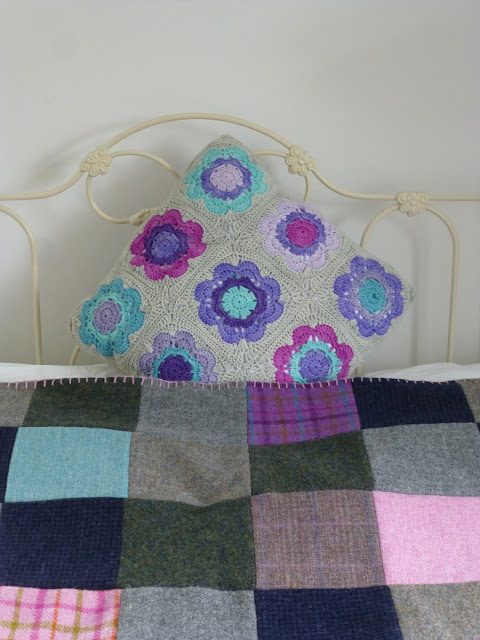 I made a crochet flower square cushion last year and, serendipitously, the colours go beautifully with it, I think. 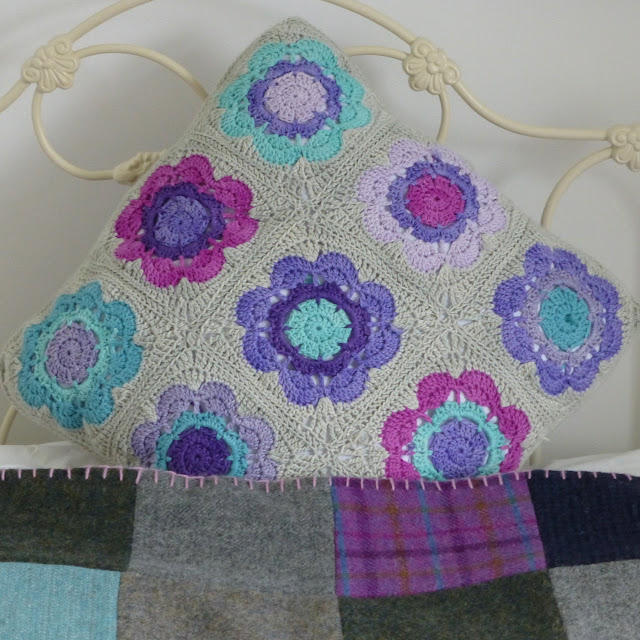 So, onto the Russian cake. I loved Russia. At every level. So different from Western Europe although, of course, after the dismantling of the Soviet Union in the 1990s, many more western influences pervade it. But it is still very different. Wonderfully so, I thought. 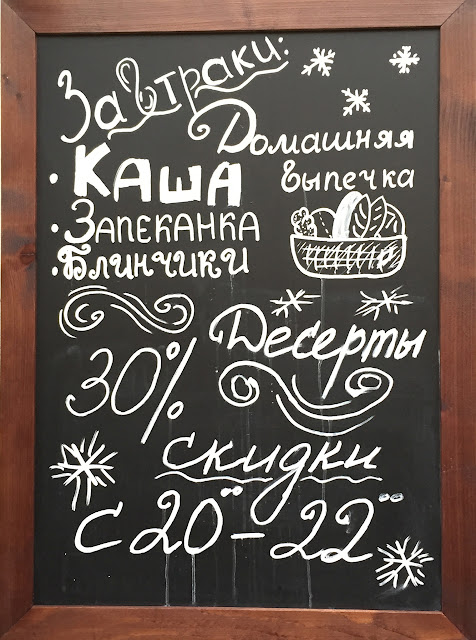 I spent a good deal of time last year learning the basics of the language - the cyrillic alphabet and script - printed cyrillic is quite different from handwritten which makes things extra complicated for a beginner - and getting outside the rudiments of Russian grammar, vocabulary and pronunciation (which has quite a few peculiar vagaries to entrap the unwary novice). Not easy. Learning a language from scratch in one's fifties, from a book and a CD, is a very different proposition from learning a language as a child, or teenager, at school, in a class, with a teacher on hand to help and, most importantly of all, to correct, I realise. But I was very proud of learning enough Russian to be able to read and communicate effectively in the normal sort of tourist contexts - buying things in shops and markets, asking the way to places, understanding and asking about menus etc etc because although a certain amount of English is spoken in the main tourist spots, it's nowhere near universal.

I haven't written about my trip on this blog but there will probably be the odd allusion to it now and again such as with this cake which was something I ate in the café at The Hermitage Museum in St Petersburg. This is a pic of the original. 120 roubles (about £1.60) for a slice of "песочный пирог" ("pesochnyie pirog"). 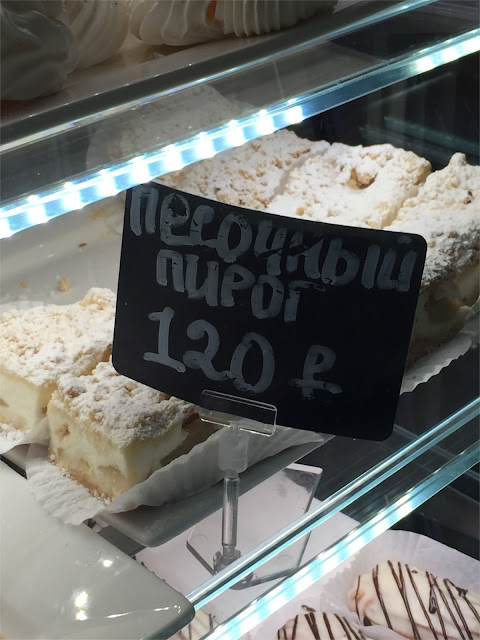 It's basically a sort of apple and sour cream streusel cake. The Russians are keen on streusel type cakes. In fact they're keen on homemade cakes, full-stop. The phrase "домашняя выпечка" ("domashnyaya vyipechka") at the top right of the blackboard sign above, was proudly repeated in many places - it means "homemade baking".  Russian baking can clearly give any other baking a very serious run for its money. One of the reasons why this particular Mrs Tittlemouse found herself at home in Russia, perhaps! Anyway, I had this cake several times - if you go to the Hermitage Museum yourself, you'll understand why - one visit is simply not enough to take in what's there - in terms of art, I mean, not cake!

But back to the business of cake in hand... The Russian word for "streusel", rather endearingly, is "песочный" (pesochnyie), which means "sandy", perfectly describing the rubbly texture of the topping. This version with apples and sour cream (sour cream is ubiquitous in both savoury and sweet dishes in Russia) was to die for. It looked relatively simple to recreate but tracking down a suitable "рецепт" / recipe was less easy, partly because my Russian is still barely past tourist level and I wanted a genuine Russian recipe. There are some American (very good) versions of sour cream apple cake around but none quite captured the charm of my rubbly Russian one. Until persistence and my own trial and error paid off, that is.

So here is my recipe for "песочный яблочный пирог" ("pesochnyie yablochnyie pirog") or "Apple Streusel Cake". It's pretty darn close to the one I ate in the Hermitage café, I have to say and very good. One of the (for me anyway) felicitous characteristics of Russian baking, is its tendency to be ingeniously creative with essentially simple and straightforward components. You don't need to have in stock, (or go out and buy), an army of strange and esoteric ingredients to bake Russian-style and I am getting a bit tired of all the goji berry / chia seed / no-wheat / no-dairy / no-sugar recipes that are popping up everywhere with righteous, if not self-righteous, claims to being "clean cuisine" implying that other less esoteric cooking is slightly contaminated or worse. (Sorry - rant over!) Mooving on...!

For my Russian Apple Streusel cake you need
300 g white self-raising flour
100g caster sugar + 2 tbsps for the filling
1/4 tsp cinnamon
1/4 tsp salt
225 g cold unsalted butter
2 small eggs (I used bantam eggs as my bantams have just started laying again after the winter - about time too, you may hear me say! Bantam eggs are small and usually I double up for any given egg quantity in a recipe but they're just right for this)
300 ml sour cream
2 tbsps semolina
6-7 apples - I used 7 small ones (an eating variety not Bramleys)

Put the flour, 100g sugar, cinnamon and salt in the food processor and whizz to aerate it. Add the cold butter cut into cubes and whizz in short bursts to incorporate it into the flour mixture. It should look like breadcrumbs. Remove about a third of the mixture by spooning it out into a pudding basin. If you weighed accurately, you are talking about removing just over 200g (208g to be precise). 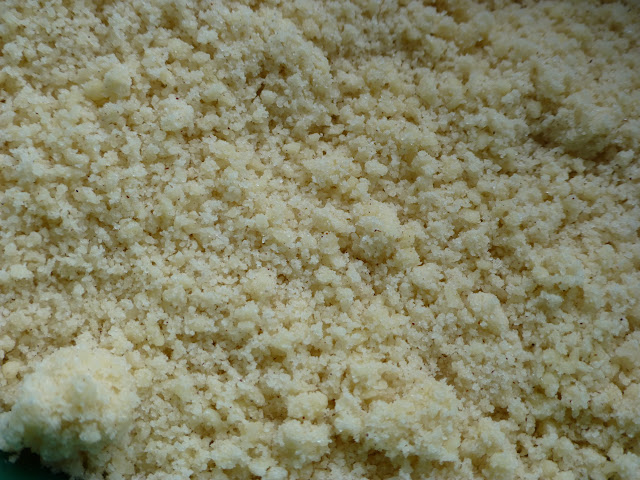 Break one of your eggs into the remaining mixture and whizz briefly to make a dough.

Line a 25 cm square tin with baking parchment and press the dough into the bottom as evenly as you can with your fingers. Chill both the dough and the reserved mixture in the fridge (or you could freeze if you wanted to). 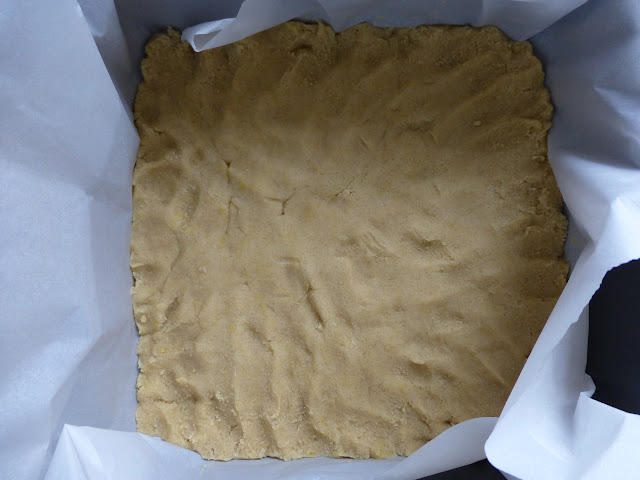 When the dough has had a few hours in the cold, remove it and your basin of reserved mixture from the fridge and preheat the oven to 180 C.

Mix the sour cream, semolina, remaining 2 tbsps sugar and your final egg in a large bowl. Peel, core and finely chop the apples into small pieces or thin slices. I prefer chunks because that's how I had the cake in Russia. Add to the sour cream mixture. 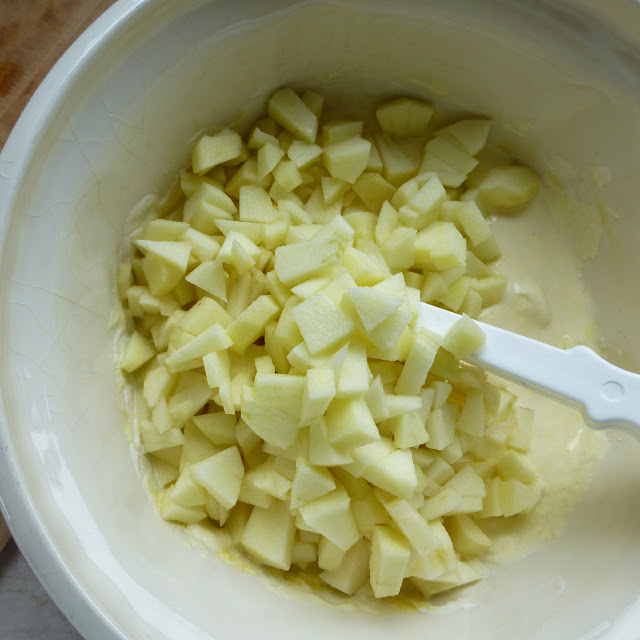 Fold the apple through gently and then pile on top of your chilled dough base. Pop in the oven for 30 minutes. 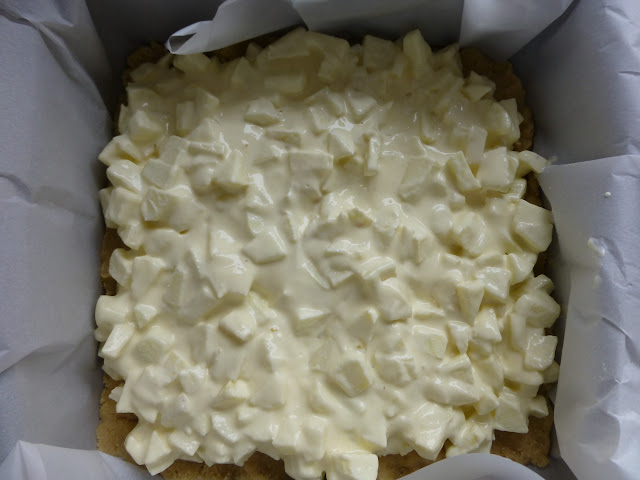 Now remove the cake from the oven and scatter your reserved sandy, rubbly mixture over the top to make the streusel topping. 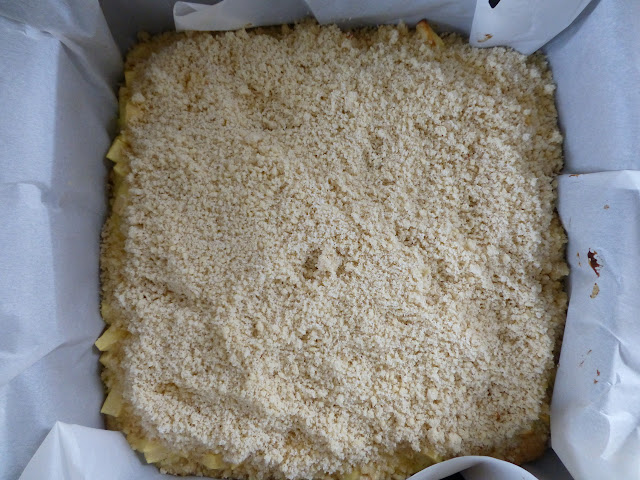 Return to the oven and bake for another 20 -25 minutes or so until the top of the пирог /cake is crisp and golden. 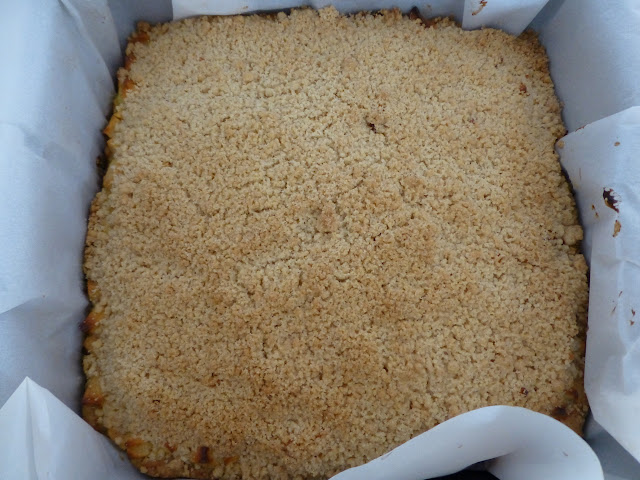 Cool in the tin, on a wire rack and then chill further in the fridge before cutting into squares or slices and eating. A light dusting of icing sugar, in honour of the Russian snows of its place of origin, is not gilding the lily, I feel! 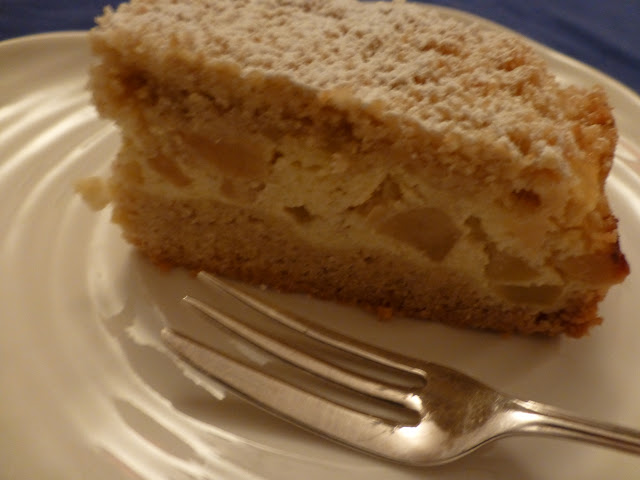 Needs nothing with it other than perhaps a glass of "чёрный чай" ("chornyie chai") black tea, Russian-style.

Posted by Thomasina Tittlemouse at 21:21 8 comments: