One of the small joys that come with the arrival of Spring is the demarcation zone of laundry drying outside on the line, instead of inside in various corners, that are intended to be inconspicuous, but end up bugging me, big time. Every year I resist buying a tumble-drier on the grounds that they take up space, cost significantly to run and I don't think the laundry smells as nice as when it's been dried in the sun and the wind outside, even if that sun is thin and elusive and the wind a pretty sharp one. Every winter I waver, after months of draping damp shirts and towels over the shower rail and on an ancient wooden clothes-horse that can't accommodate more than one small load of laundry at a time, but every year, in the nick of time, Spring arrives and the laundry is banished outside for the next six months and I breathe a sigh of relief. The tumble-drier temptation has been seen off once again and all is well. 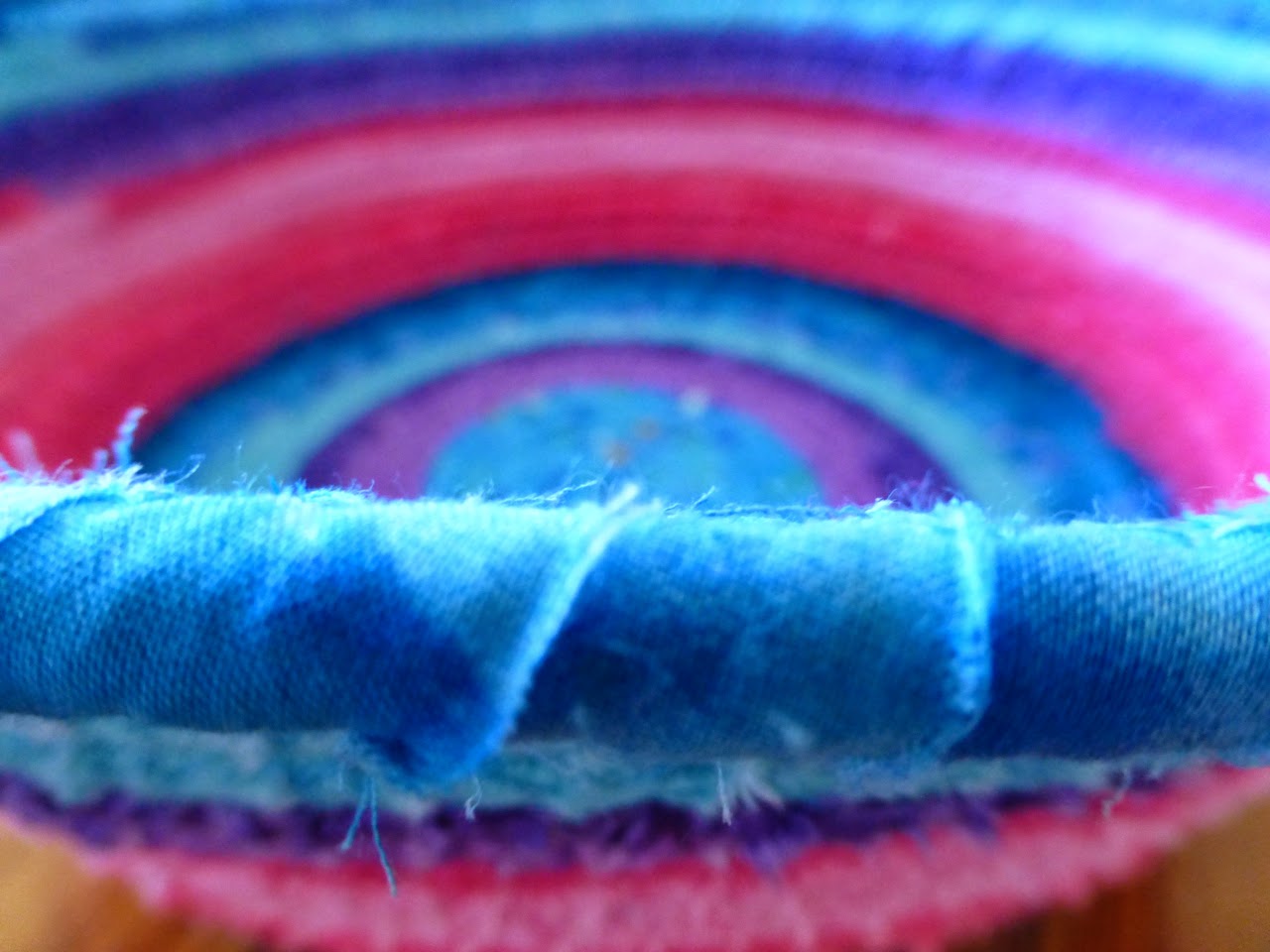 I've seen various iterations of baskets, bowls and bags made from fabric covered washing-line and I suddenly got the urge to have a go myself. As you do!

In view of the fact that my washing-line serves as exactly that, I couldn't siphon off a few yards without causing problems for my laundry-drying, and in any case my washing-line is plastic-coated wire which is not suitable, so I had to hunt out an alternative. With some difficulty I might add. You need cotton covered washing-line without any plastic or metal anywhere near it, (or inside it), and this is not as easy to come by now as one might hope.

I drew a blank at Homebase and B&Q but at a small, old-fashioned, independent ironmongery, A L Vickery of Drayton, a few miles down the road, success was mine. It's rare to find an old fashioned ironmongery these days but when you do, it's always a delight - little drawers of loose screws and nails that you expect to buy by the ounce; beeswax furniture polish; brush-heads; drill-bits and saw-blades lurk, cheek by jowl, with pyrex kitchenware, pale blue muffin papers adorned with roses and stainless steel teapots. The kind of place where you can't see what you're after, you ask and they always have it, no matter how obscure or insignificant your quest is. In response to my inquiry about cotton washing-line, I was directed to a board displaying reels of sash cord, which is basically the same thing. Made encouragingly by a company called "Everlasto" which has been going since 1856. 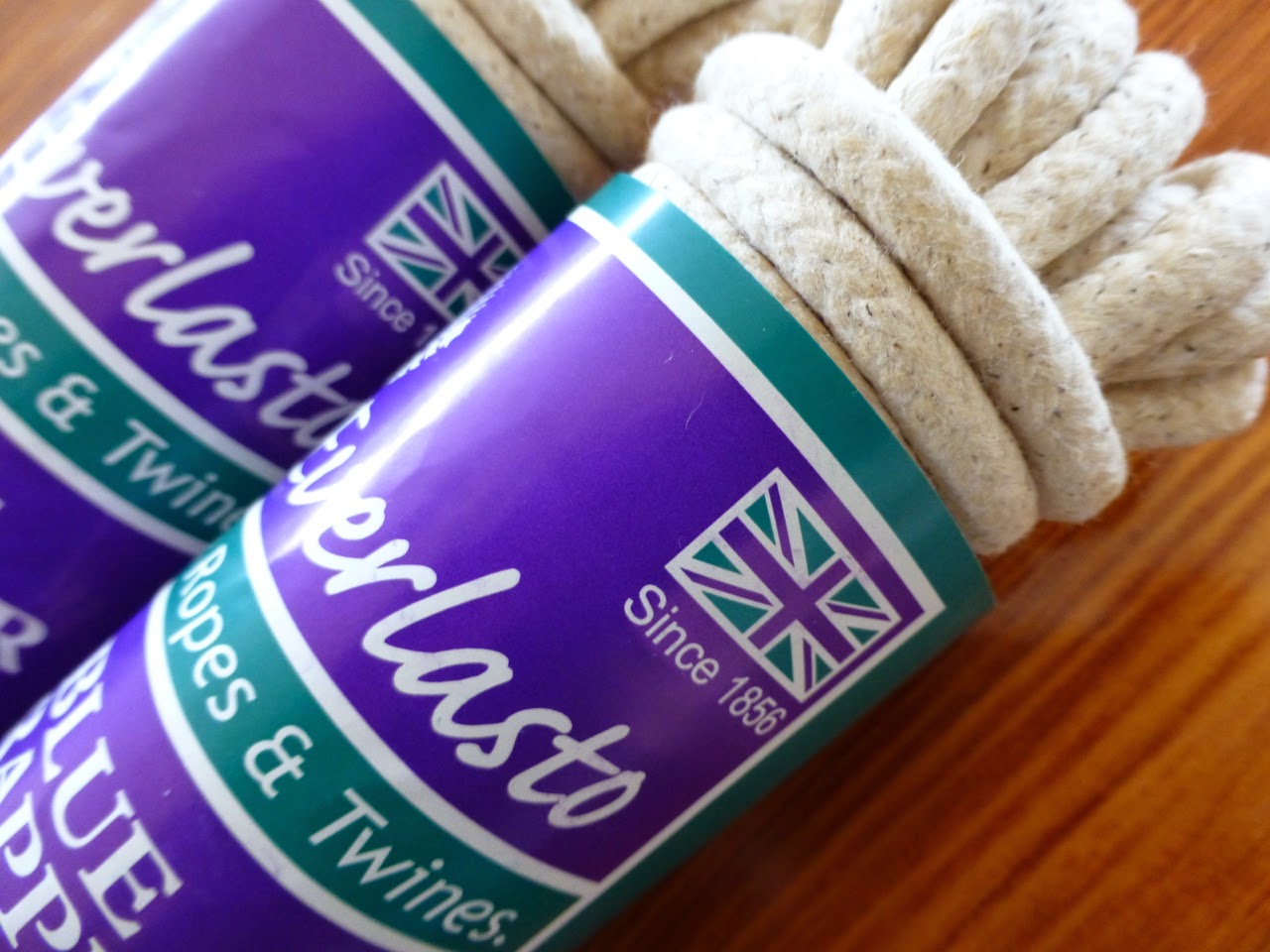 You can buy this in reels that are attached to one another so that it's not cut unnecessarily short. I bought two. 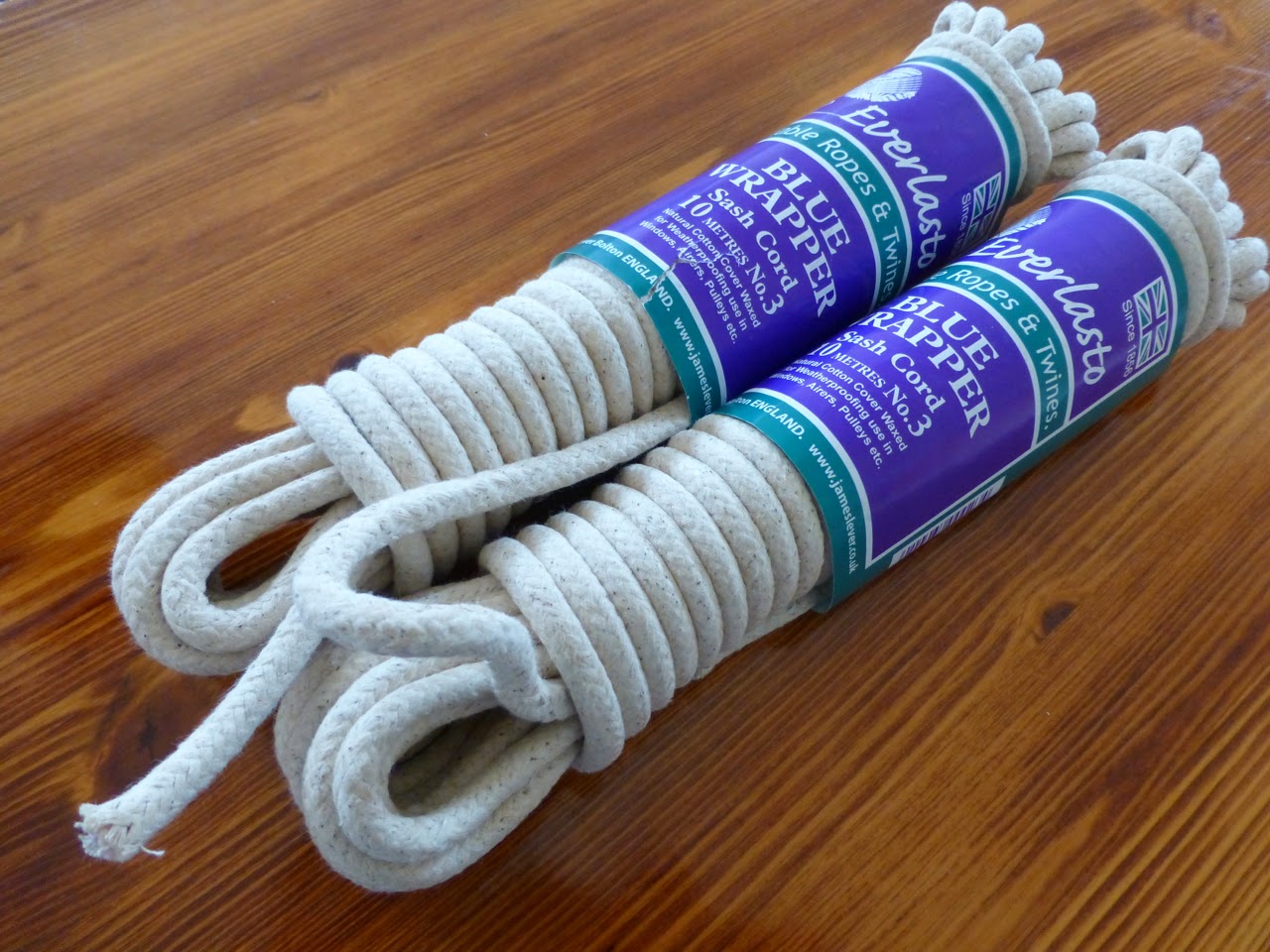 Back home, I raided Google for some instructions - these sites here and here were great for inspiration and help - and set about my boxes of fabric scraps to rip up a nice pile of shreds to wrap the cord. 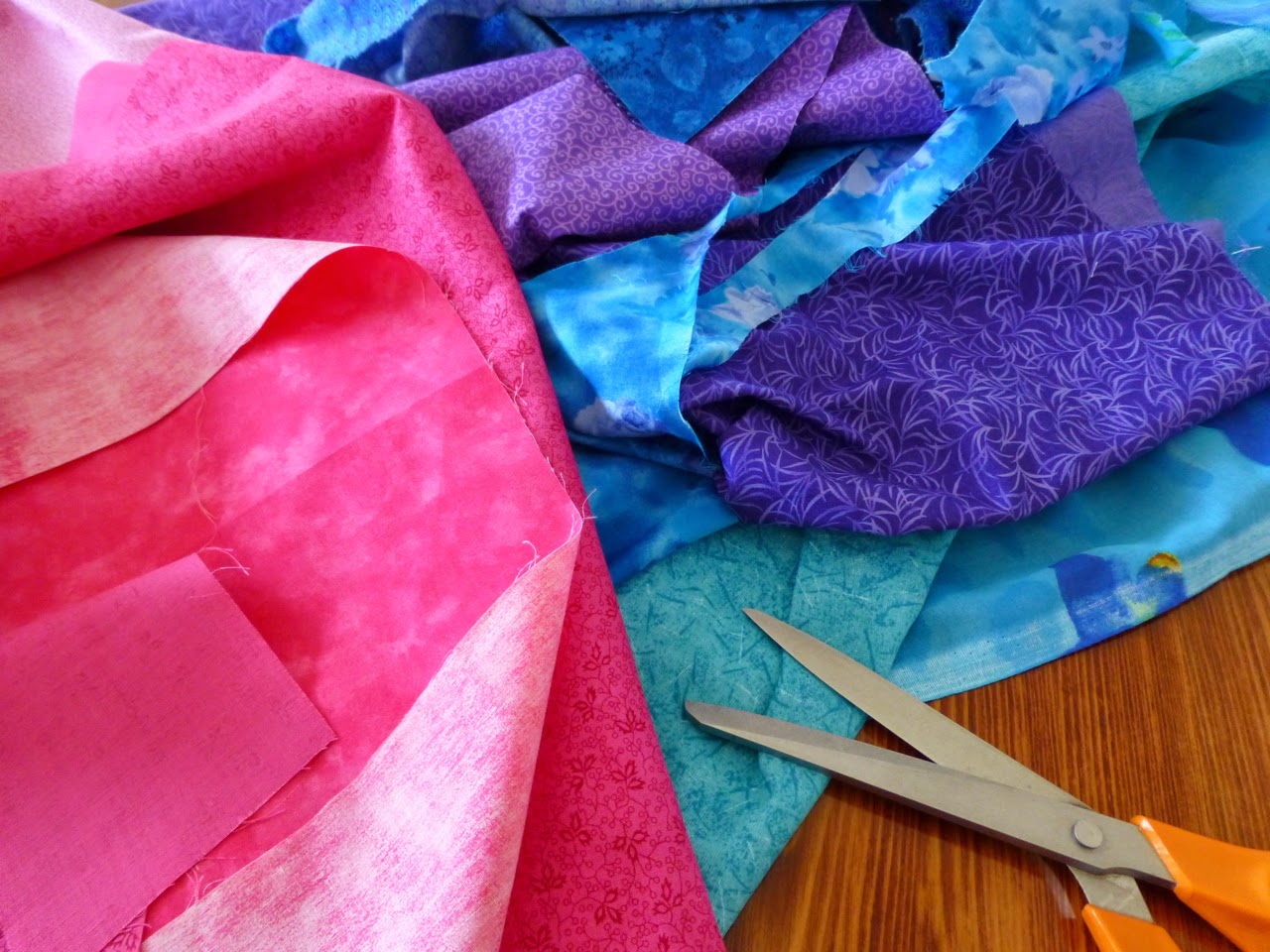 Happy work, I have to say! I've always had a "happy snipper" tendency! Before long, a large spoilheap of fabric strips was mine to play with. 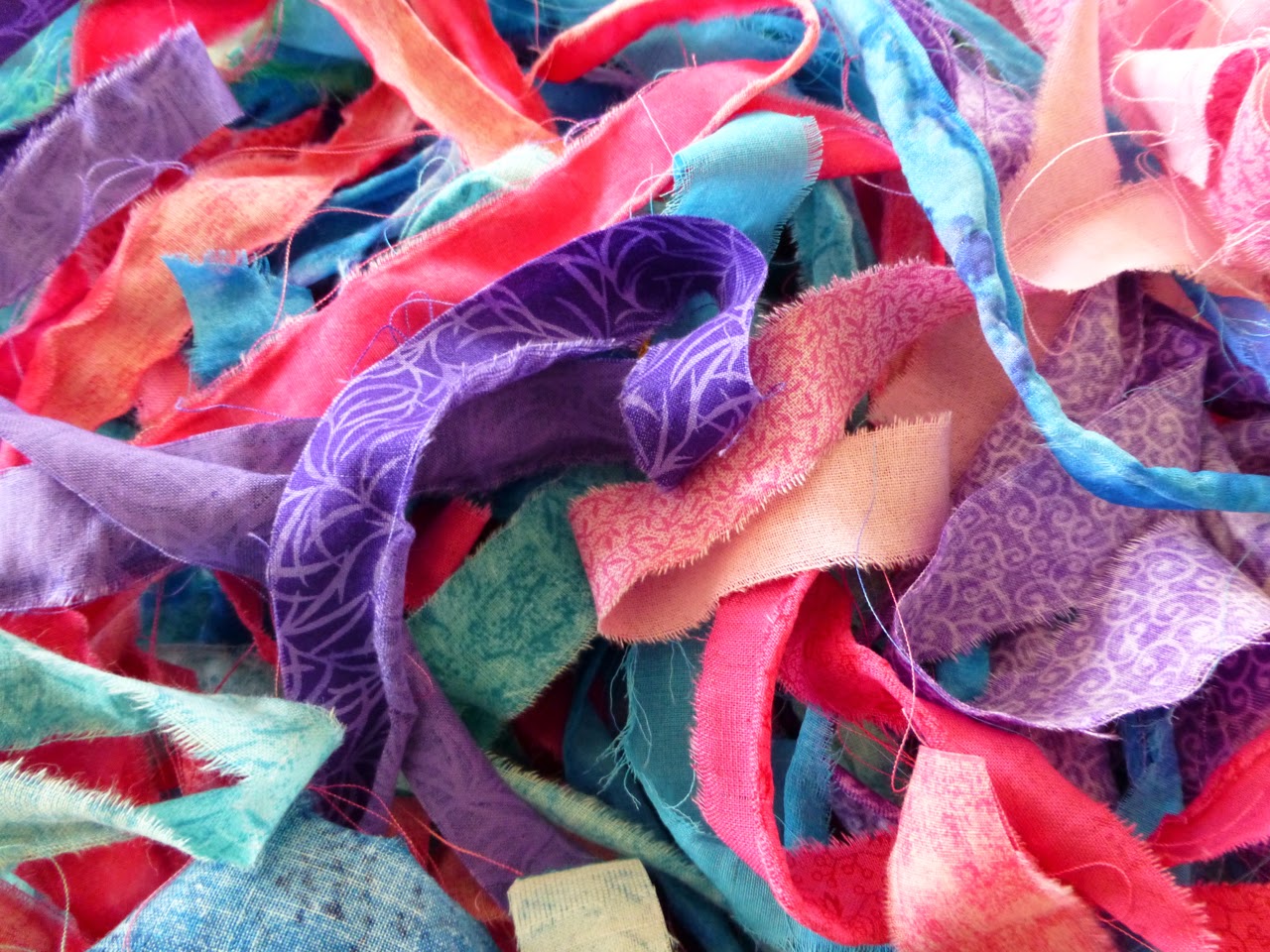 I thought I'd just try wrapping a few to see how they worked and some time later I was still going - it is singularly addictive! 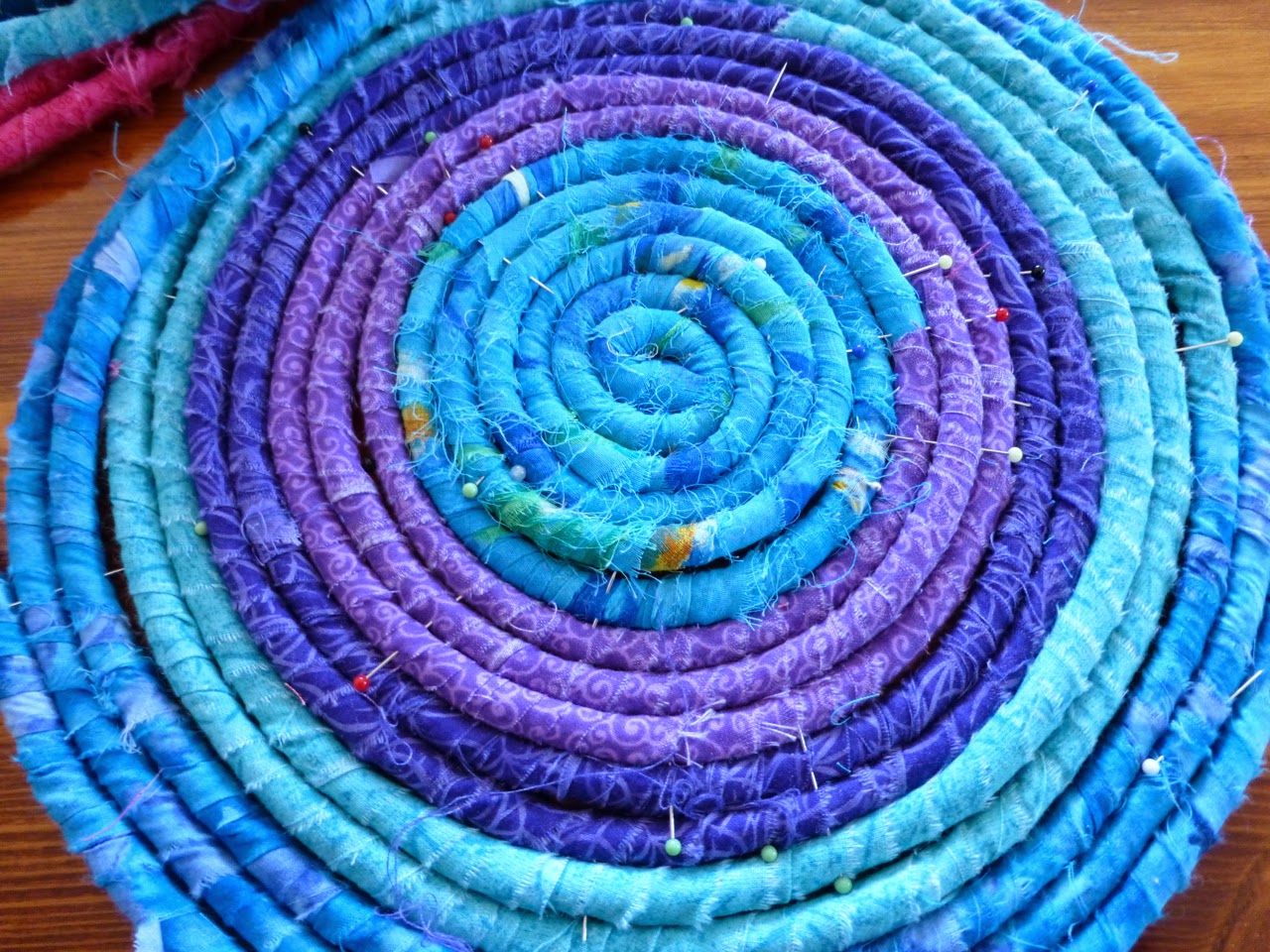 I pinned the wrapped cord as I went, so that I had some idea of where the colour changes were going to fall and kept going until both reels of cord were pretty much covered. All 20 metres! The fabric strips need to be wound on tightly but I found that, once wound, they stayed put and I only needed a few pins here and there actually to secure the fabric onto the cord. The pins you can see in the pic are mostly just to work out how the coil was going to assemble itself, colour-wise. 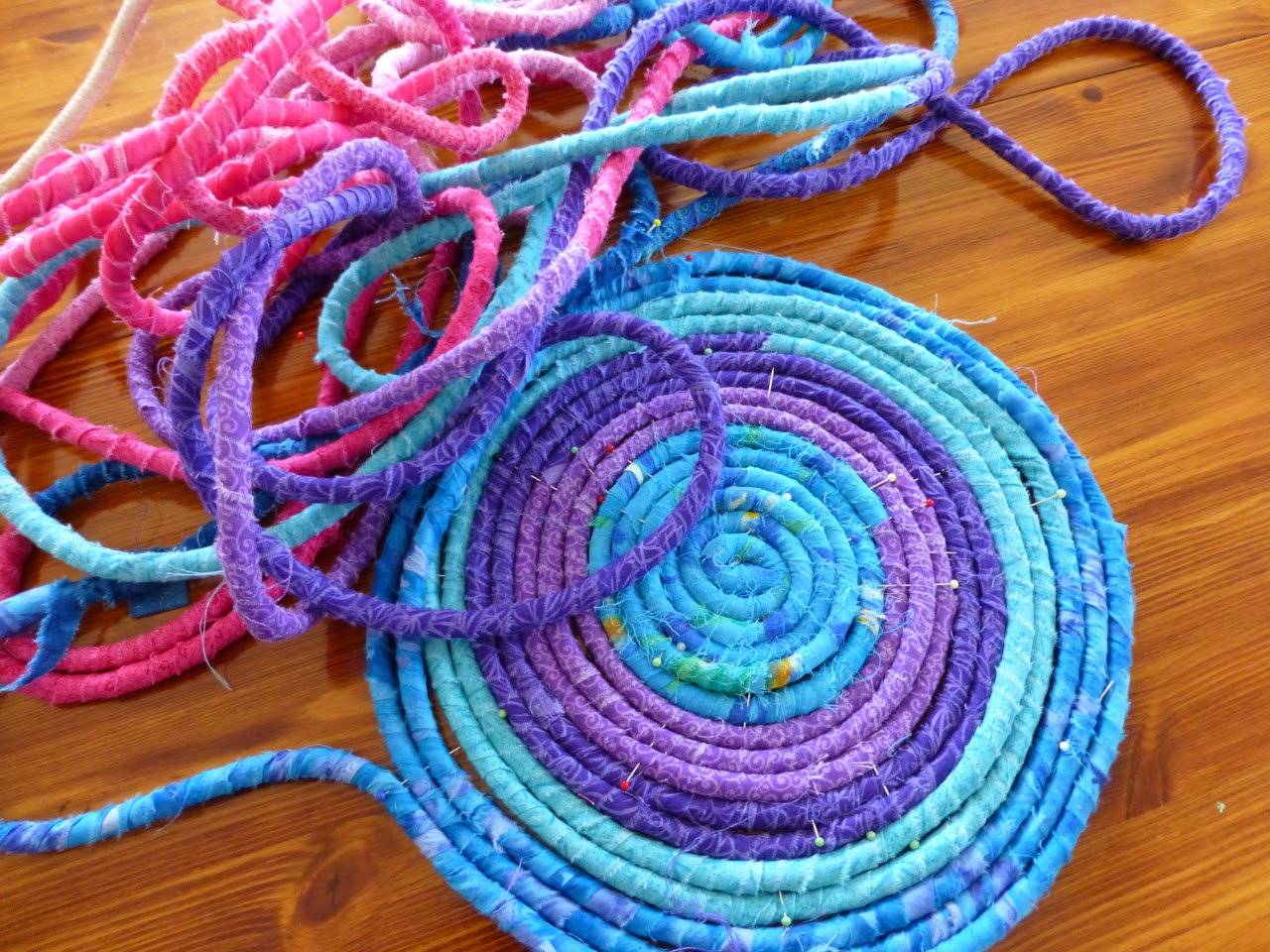 Next up was the sewing. All the tutorials I found said to use a long zig zag setting on your sewing machine so that's what I did, coiling the wrapped rope around and zig zagging all the way. I changed the thread colour as the colour of the fabric changed but you don't have to. 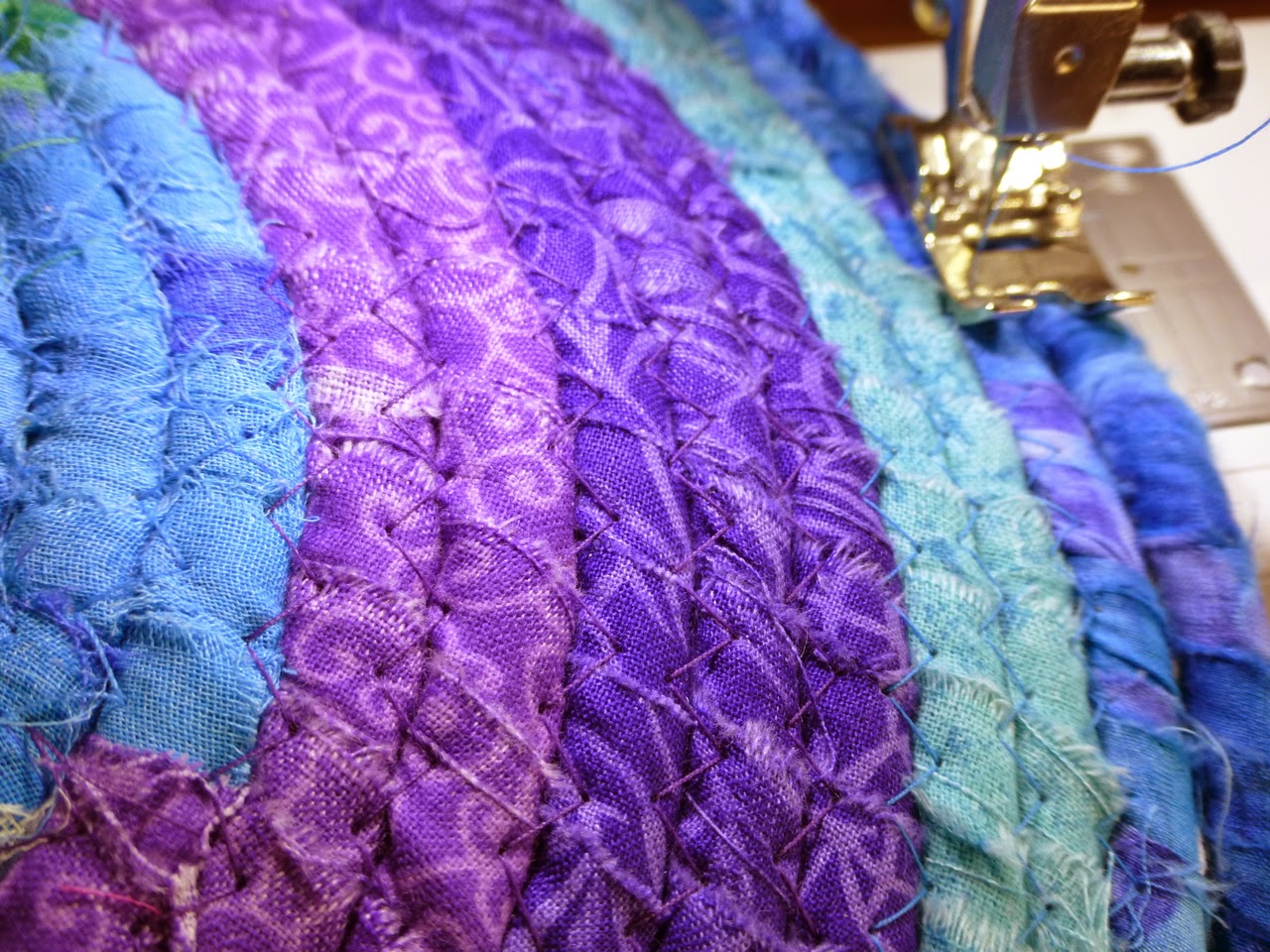 I found the flat base quite easy and everything was going swimmingly. Less easy was negotiating beginning the basket walls where you have to turn the basket, as you stitch. I broke a sewing machine needle and lost the sharp tip in the bowels of the machine, at this point. A bad word was said.

Funnily enough, the sewing machine didn't like operating with a foreign object lodged in its mechanism so I had to undo the bobbin housing and hunt about. More bad words were said. My delight at retrieving the needle-tip, which I had begun to fear might be gone forever and live permanently, like a malevolent gremlin, in the machine, was short-lived when I realised that all the many bits of the sewing machine mechanism, that had come out of the bobbin housing, would have to Go Back. In The Right Order. Oh dear! After a good deal of cursing and jostling and trying not to jam anything irrevocably, I am pleased to say that I won this battle, albeit slightly scarred by an argument with the bobbin cover from which I came off worst and with a few tell tale marks of sewing machine oil on my fingers. Undaunted, however, I pressed on.

Another needle broke before I decided to stitch the beginning of the turn-up by hand and then continue with the machine once we were on the flat plane of the sides without trying to operate in three dimensions. 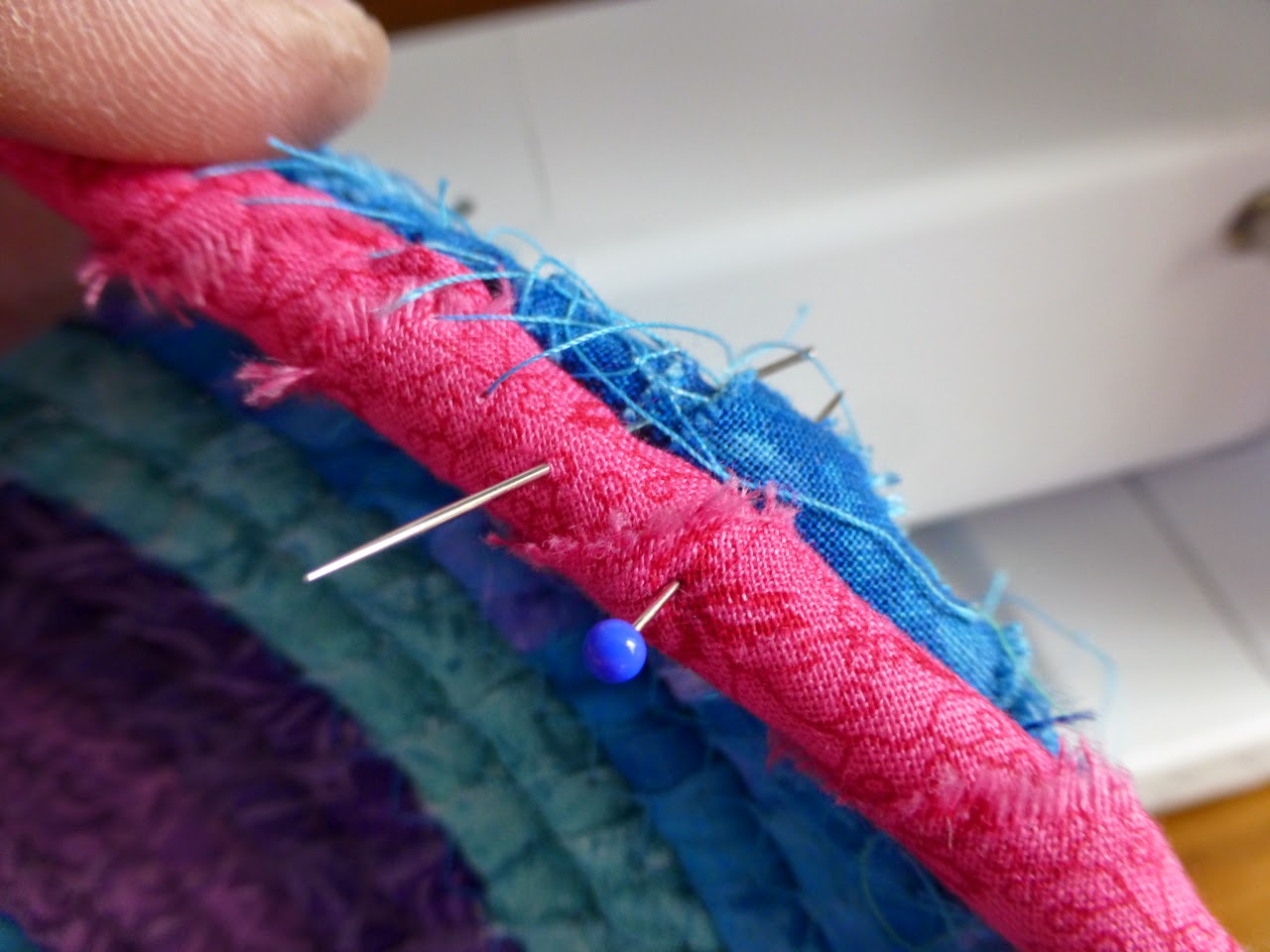 I'd recommend this if you want to have a go yourself. I think carrying on with the machine would be fine if you are happy with gently sloping sides that only gradually pull away from the base - the angle of turn would be much easier to accommodate - but it's a bit more tricky if you want something that turns more sharply. Or it may be just me being incompetent. Once I had stitched the sides, I found it reasonably easy to go back though, and zig zag over my hand-stitching just to make sure it was secure.

Onto the main body of the sides, it was relatively plain sailing. I had to keep reminding myself to "put the foot down" because the fabric-covered rope is so thick it's easy to think the sewing machine foot is down when it isn't and, of course, again, the machine doesn't appreciate that. 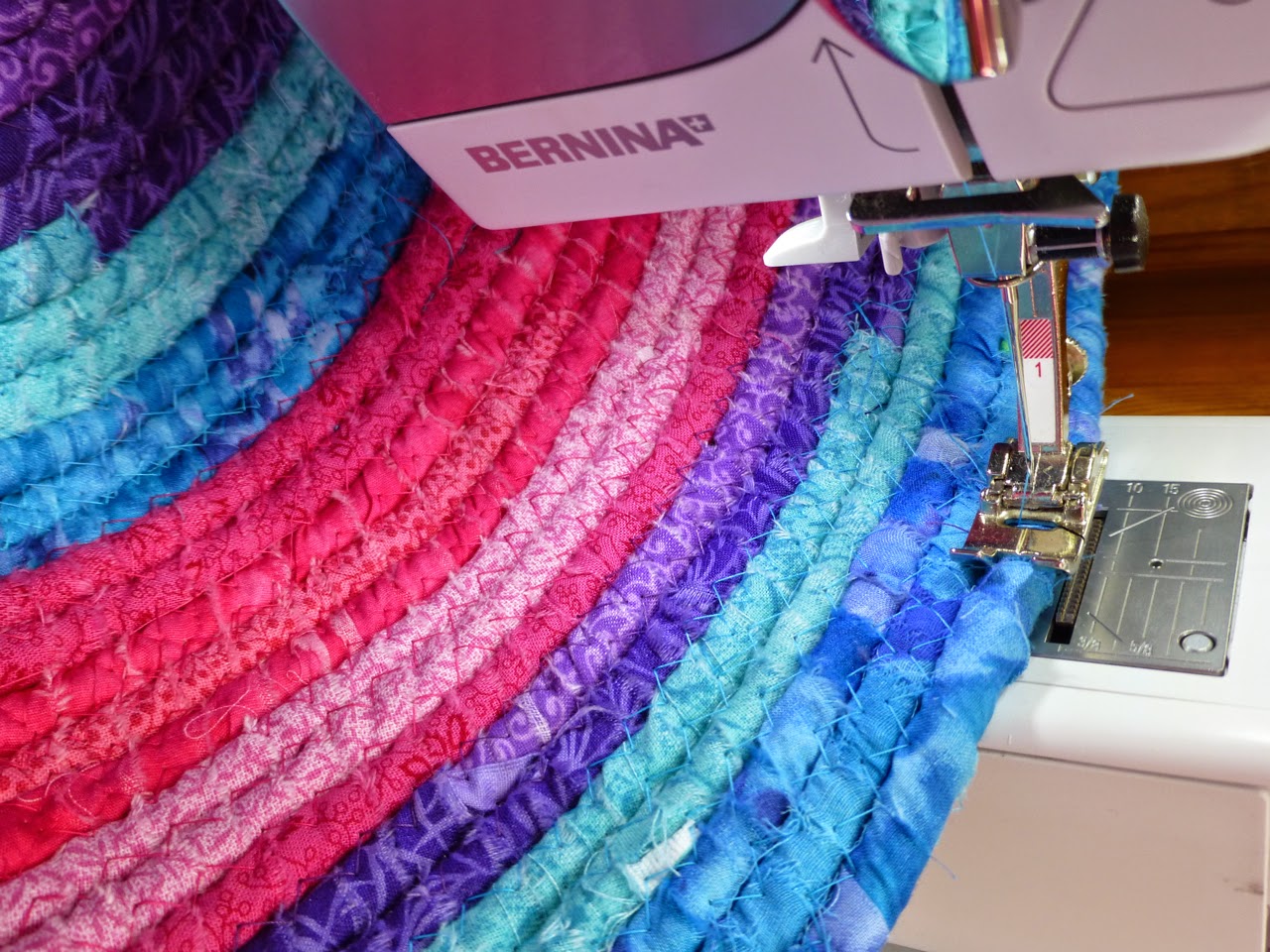 All in all, I managed to break four, no, five sewing machine needles on this little project! Oops! 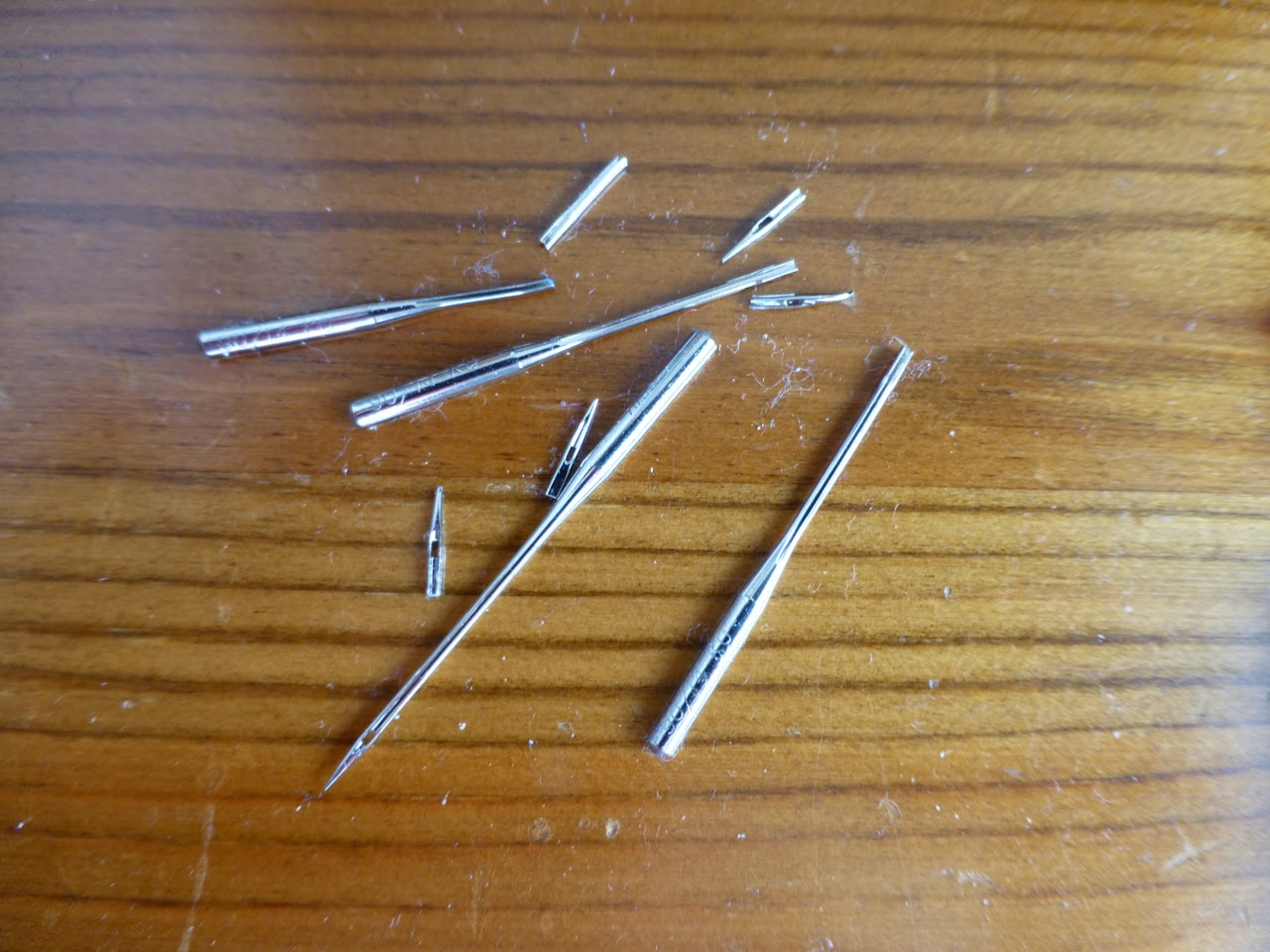 But in the end it has come out beautifully, I think. 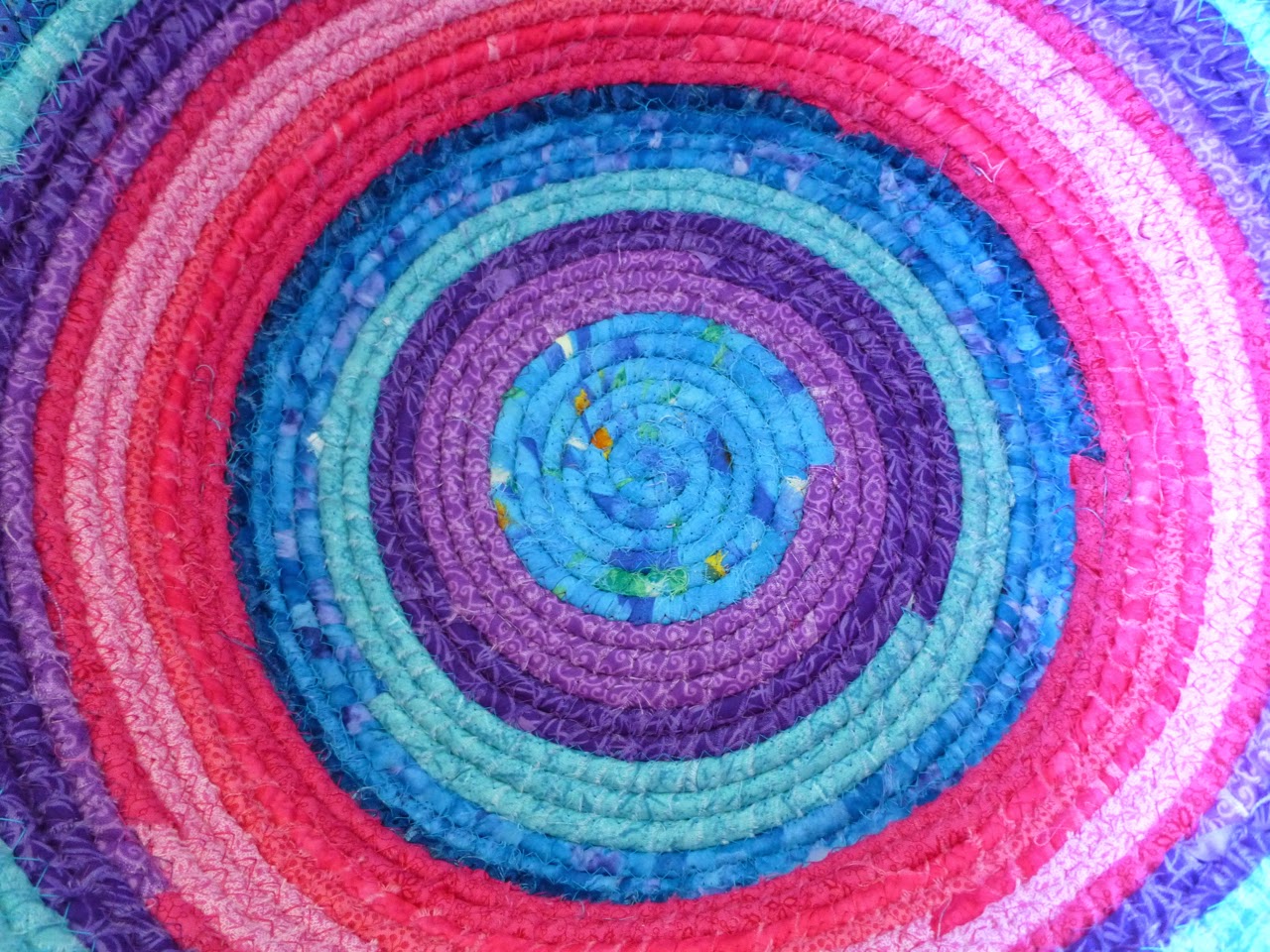 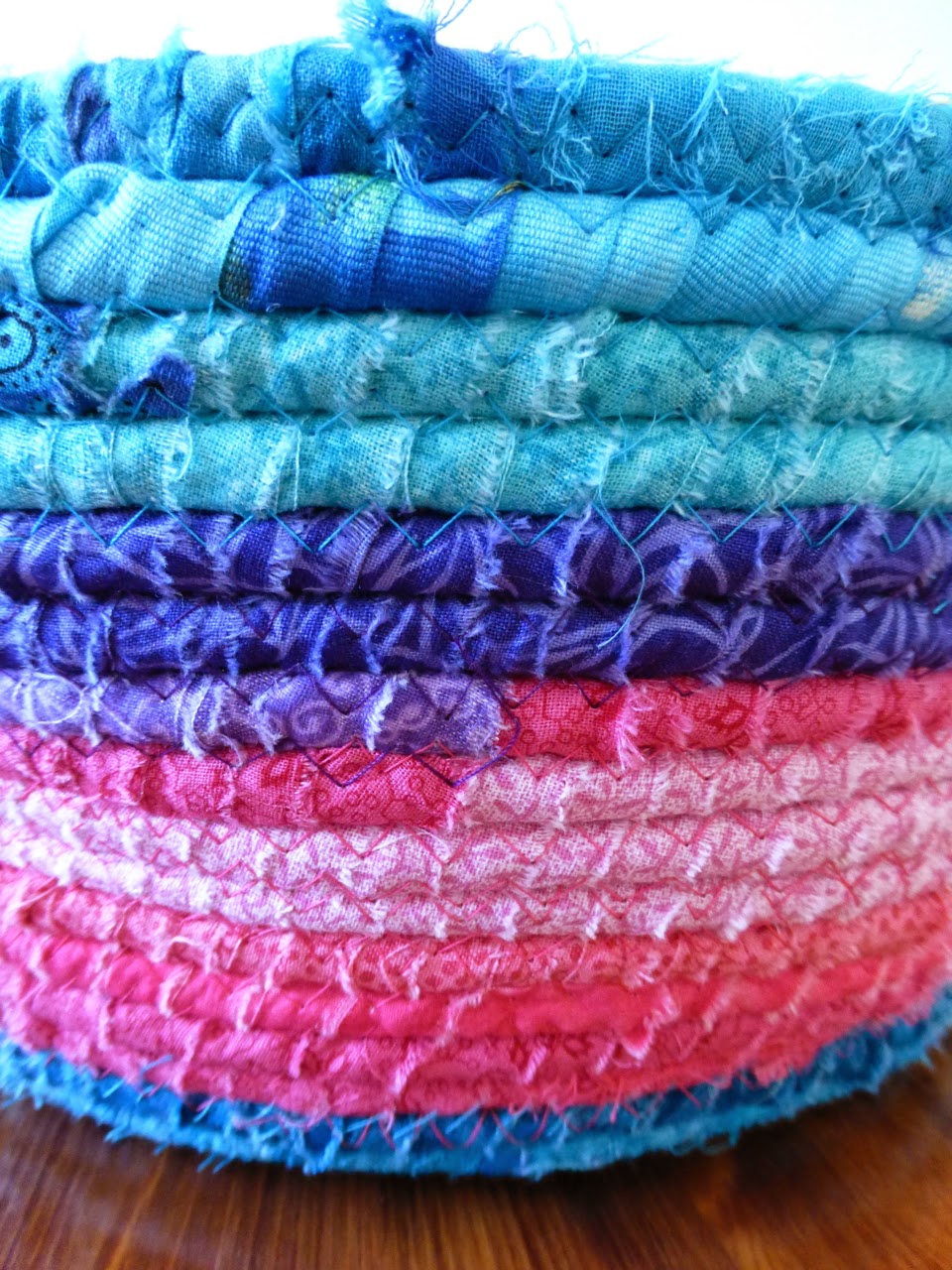 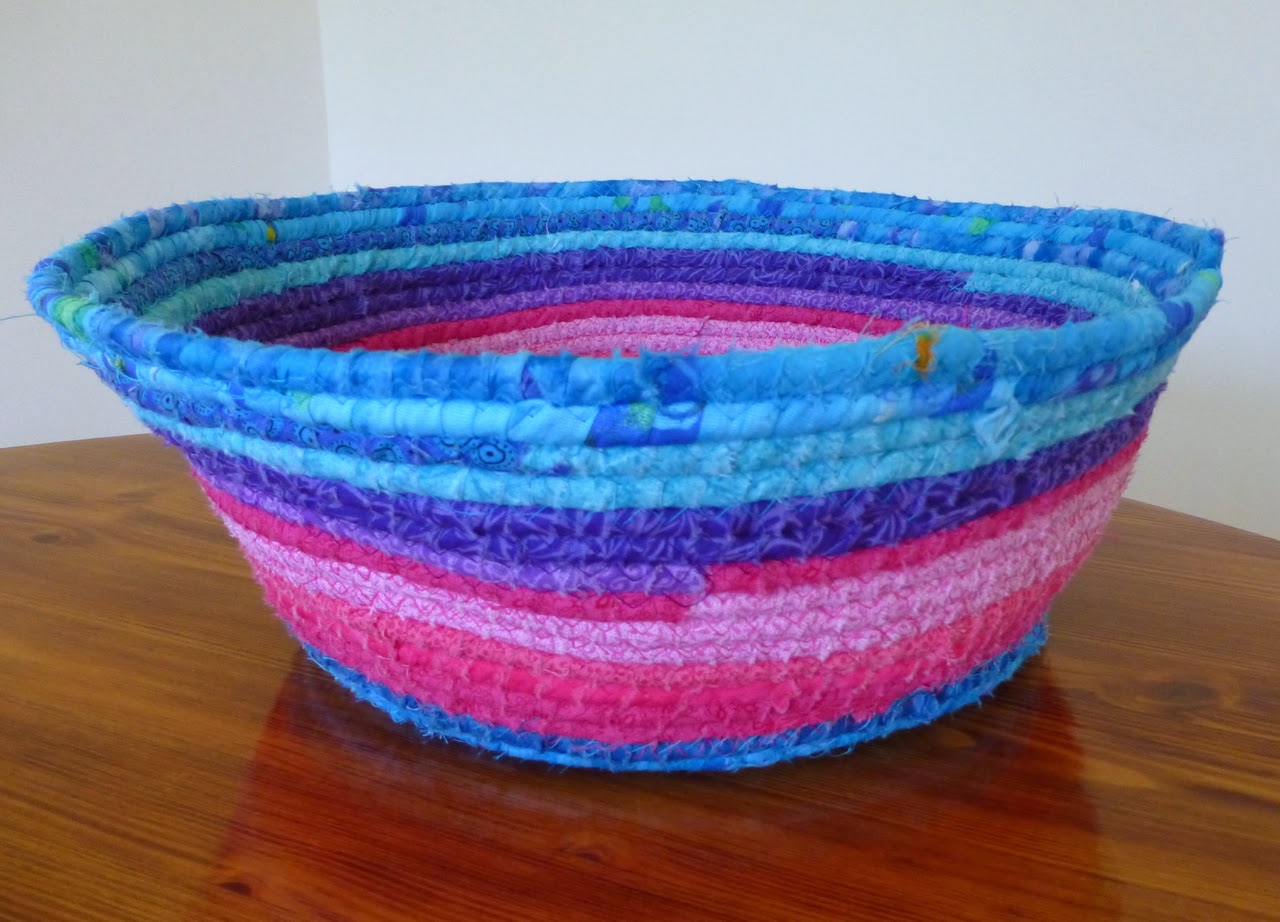 I love it! The finished article is nice and robust but not too heavy. Can't think why I haven't made one before. It would make a great container to store toys, computer cables, socks, hats and scarves or anything really. 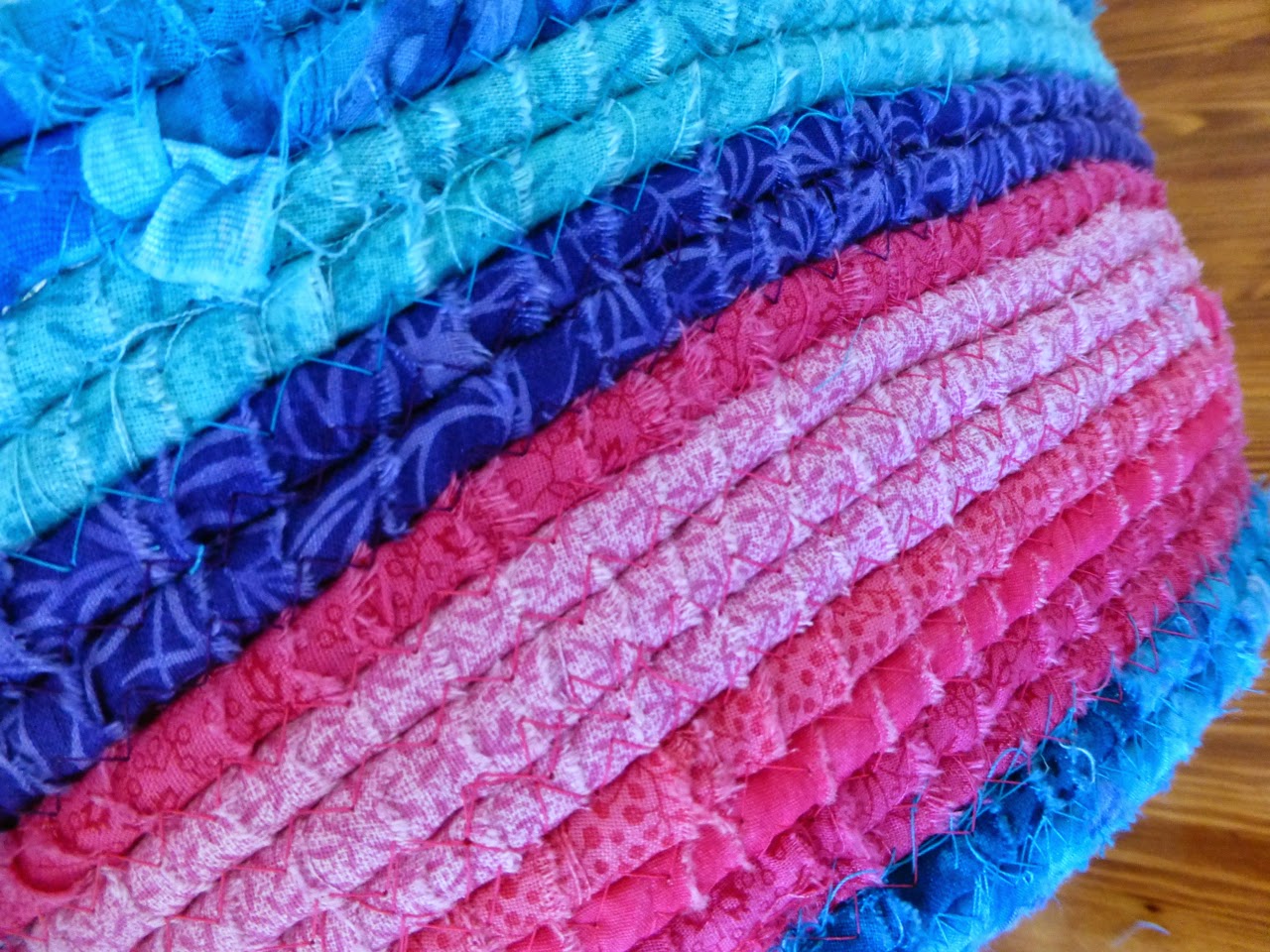 And I have another three reels of cord for another go. Need to buy another packet of sewing machine needles first, though! And some more thread - the project eats quite a bit.

Obviously you can buy fabric to make these baskets but there is something very satisfying about making them from scraps. If you don't have a hoard of fabric scraps waiting to be raided, old shirts, cotton dresses or skirts, that you don't wear any more, would be good potential hunting grounds. Ideally you need the strips to have a bit of length to them or the wrapping gets a bit fiddly but you don't need huge pieces. Some of mine were really quite small. Nothing too thick in terms of fabric though or you won't get the fabric-covered rope under the sewing machine foot.

Now the sun is out, post-eclipse, so I must get out there and hang my laundry on my more functional washing line! 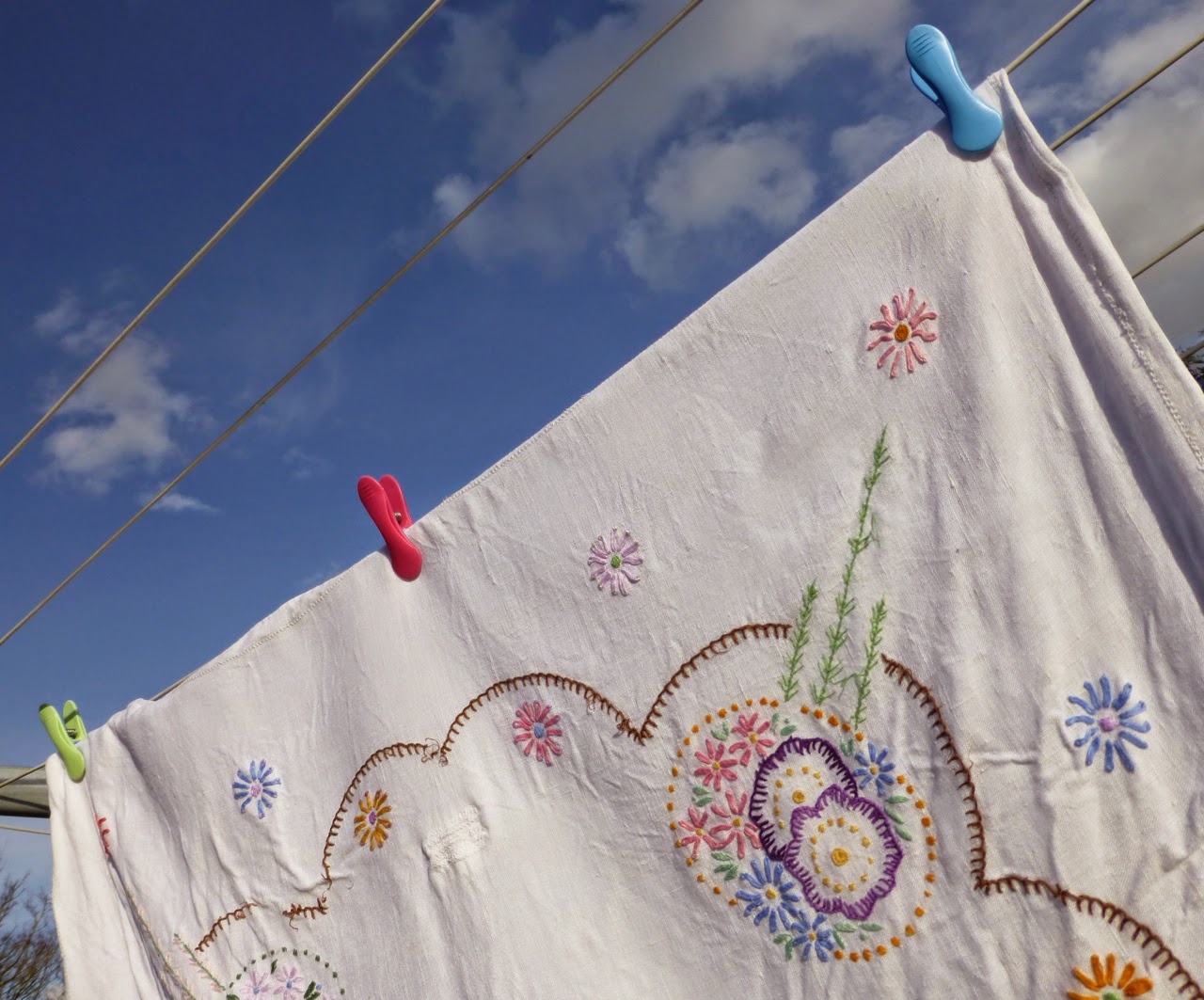 And perhaps pick a bunch of daffodils because they are out a-plenty now and my new basket will also be good for cradling a bunch of flowers, I think! 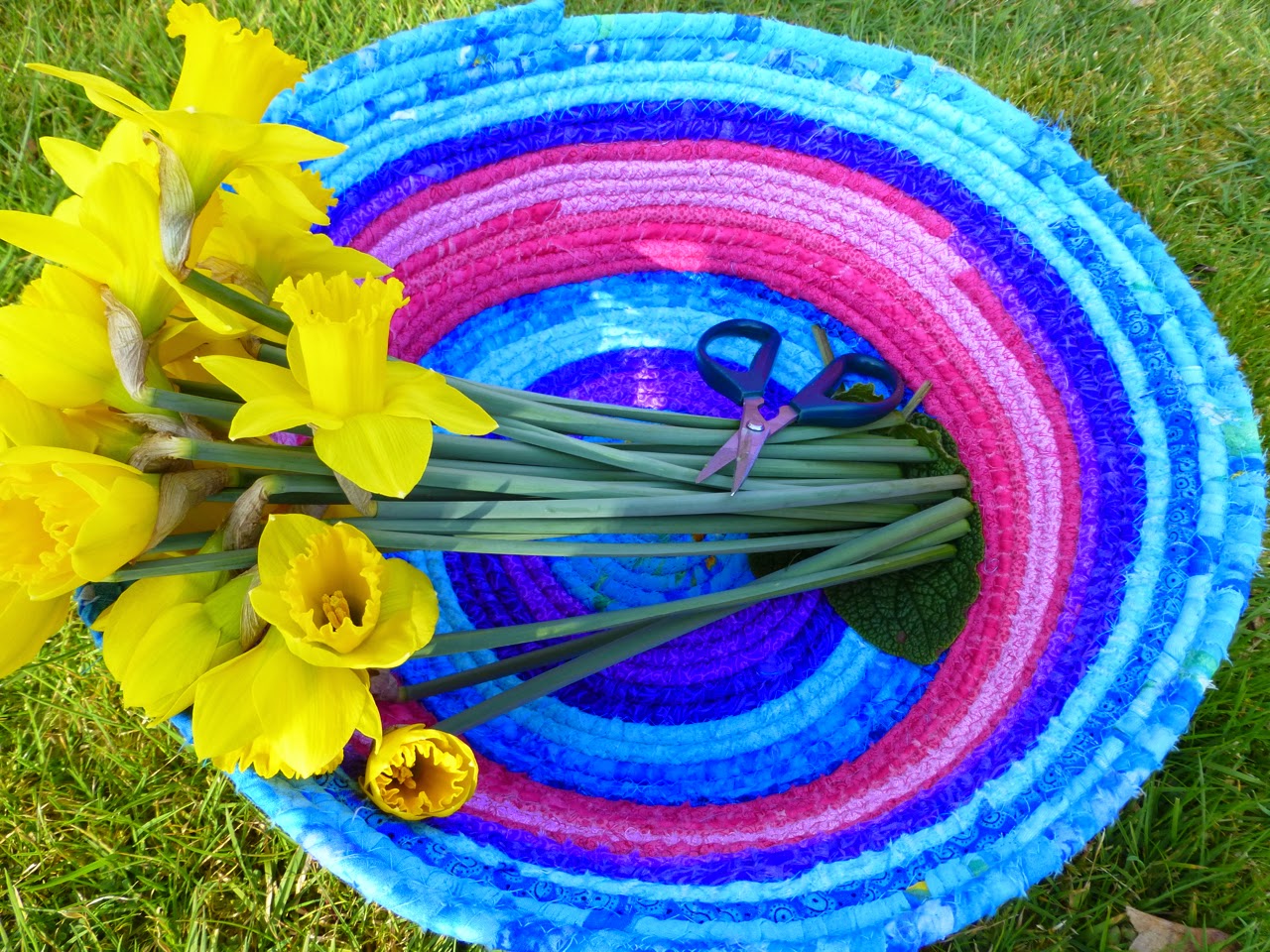 Wishing you all a happy weekend
with may be a washing-line tale of your own?!

Be warned though, once you start, you may find it difficult to stop!

Posted by Thomasina Tittlemouse at 14:55 28 comments: