Two of the final Slamsey's Creative Summer Challenge prompts last week were 'develop' and 'same time, same place'. which fitted rather neatly with my plans to revisit my eco printing experiments. 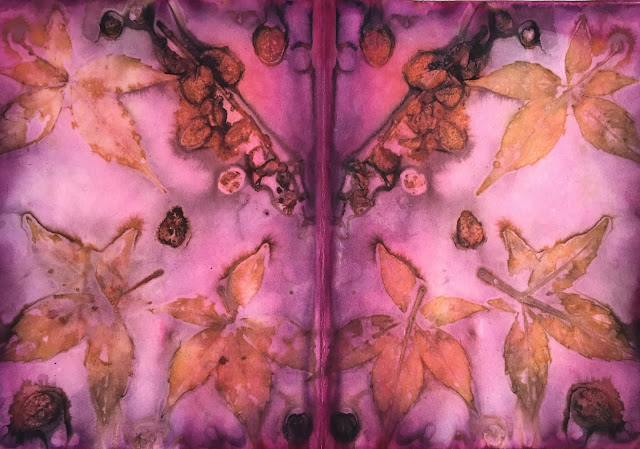 Emboldened by the success of my first attempt, I thought I would try the process again with some different paper and with slightly fewer leaves on each page. In my enthusiasm, the papers in the first attempt had been a bit crowded, which resulted in too much going on in some of the resulting prints, I felt. I also wanted to try out some different leaves - oak and witch hazel for example, both of which are high in the tannin required to give a good image.

A slightly thinner paper sandwich took up less room in my roasting cauldron which also allowed me to add in a piece of my broomstick(!) around which I had tied some pieces of white calico, layered with leaves to see what would happen on fabric as well as paper. I used exactly the same process as I used the first time, soaking my substrates and botanicals in alum solution and adding my jar of rusty iron bits, soaked in vinegar and water.

The paper prints came out beautifully - less busy than the first set and with very clear, defined images with a good amount of colour, especially from the witch hazel. But the fabric was a bit disappointing. As I said to Anne, less like artistic prints and more like rags someone has used to clean their bicycle-chain! 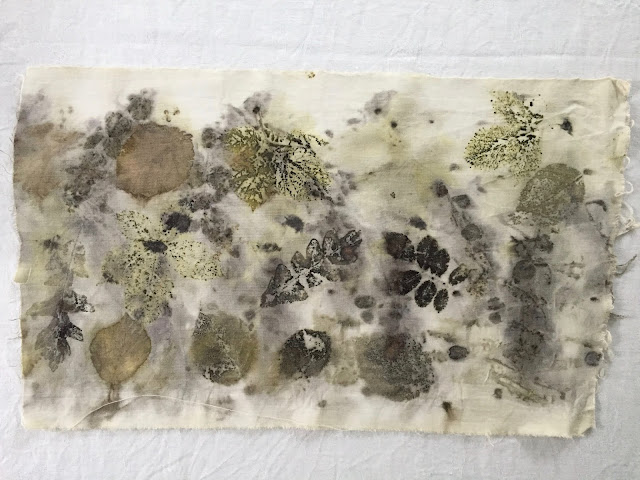 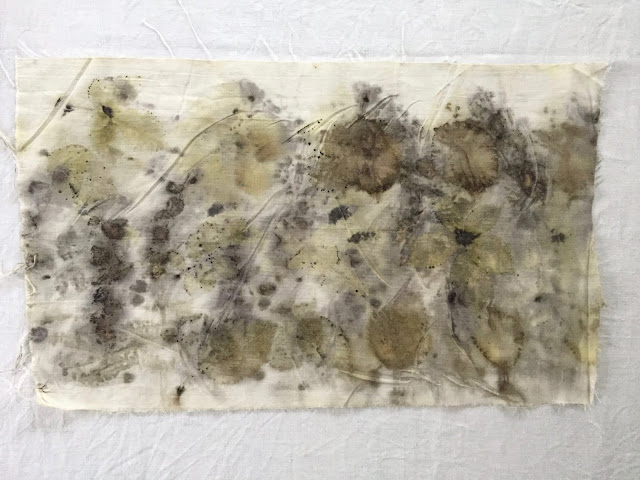 Part two of this second experiment was to add some extra colour. The colour palette of eco prints is quite cold, especially with the addition of iron to the cauldron. The iron helps to give the images definition but it does add a certain melancholy darkness and I wanted to see if I couldn't brighten things up with a dip in some kind of natural dye bath.

I liked the idea of adding blue but blue in the natural dye world is a tricky customer and after some extensive research, I reluctantly came to the conclusion that setting up a woad vat, activated with stale urine, was not a flyer. Indigo dyeing too, is quite complicated and I wasn't interested in the easier-to-obtain shades such as browns or yellows. Pink, however, was another matter. Of the available options, I chose good old fashioned cochineal, the original pink food colouring. As you probably know, cochineal is made from bugs. In particular, the females of a species of beetle which feed on a variety of S American cactus. The beetles absorb the red colourant from the cactus and are harvested, dried and ground up to make the vivid pink dye. Slightly off-putting though the process sounded, it seemed feasible and, as cochineal is food-safe, it was compatible with operating in a domestic kitchen where food, as well as dye, is prepared.

Taking a deep breath, I ordered some dead critters through the post. A wee jar of desiccated cochineal beetles arrived and I duly ground a couple of teaspoonfuls up with a pestle and mortar. 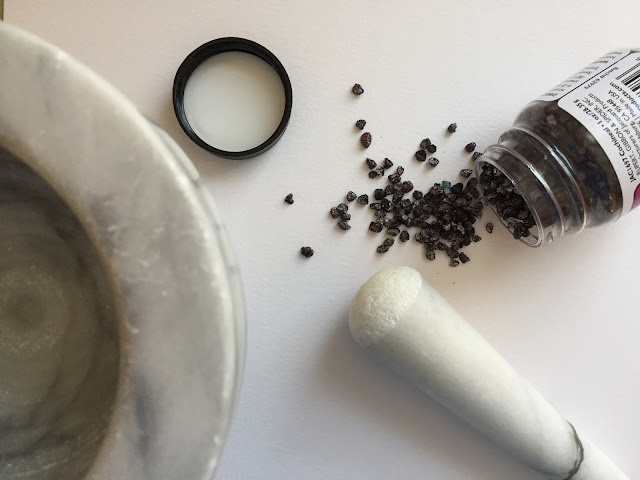 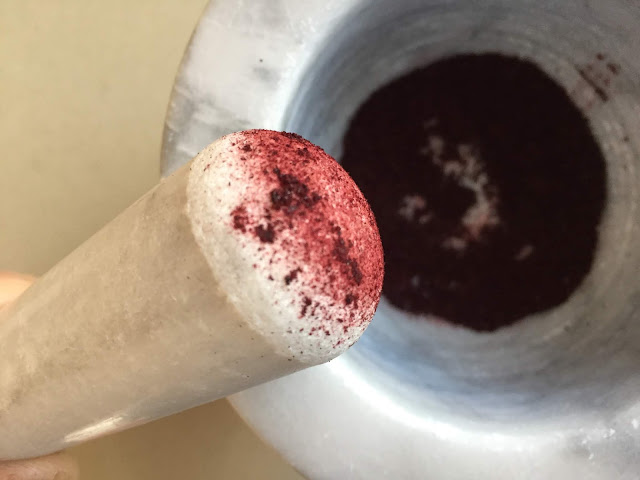 I then simmered them in filtered rainwater with a pinch of cream of tartar, strained them and repeated the process with fresh water another three times, to extract as much colour as possible. If last week's efforts had felt slightly 'witchy', this certainly did. The resulting liquid from each 'extraction' I collected up in my roasting pan and added my paper prints in loose pages leaving them to steep at 30˚C for 30 minutes and then raising the temperature to 80˚ C for another 45 minutes. 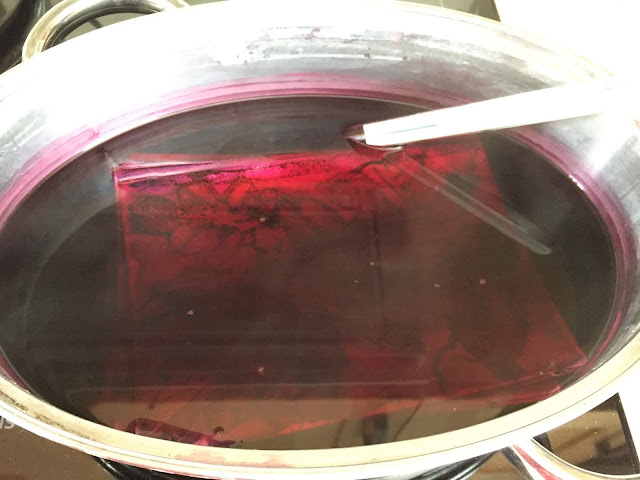 Boiling dulls the colour apparently, so a thermometer and a watchful, witchy eye is required on the proceedings. Carefully removing the pages from the dye batch I was thrilled to see how much colour they had taken and how much variation there was. The residual iron left in the prints had pushed the pink cochineal colour towards purple in places. 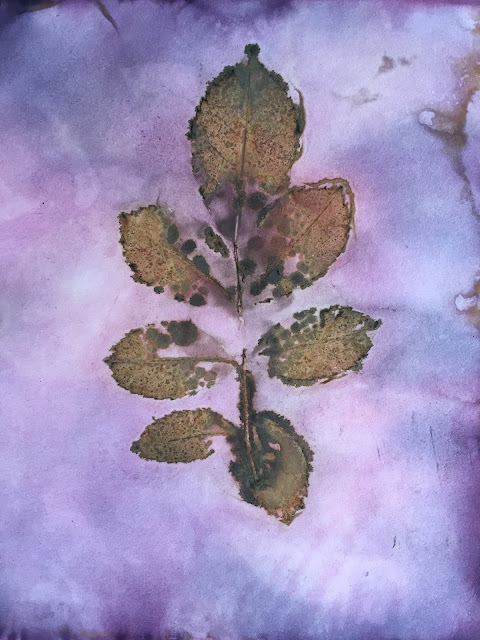 Some pages had absorbed more colour than others but, all in all, I thought the results were fabulous. Go, cochineal beetles! 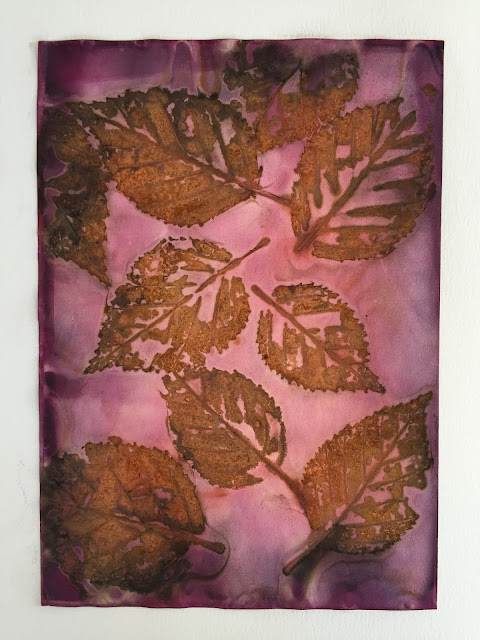 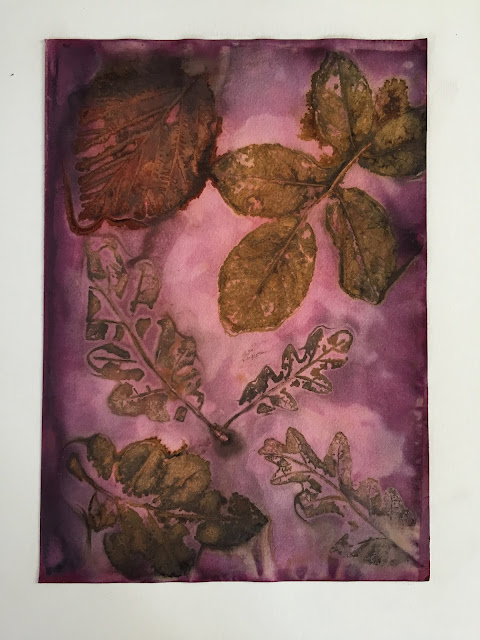 Encouraged by the advice on the Interwebs to save the used dye for reuse, I carefully poured it into a cleaned milk carton, (labelled it, to avoid anyone getting an unpleasant surprise when making a cup of tea!), and stored it in the fridge. It will keep for about a week apparently. The following day I thought I'd see what it might do to my cheerless fabric prints. And lo and behold it performed its magic again! In place of my bicycle-chain-cleaning-rags, I had some rather beautiful, subtle prints on gentle pink backgrounds - enough colour to transform but not so much they looked garish. 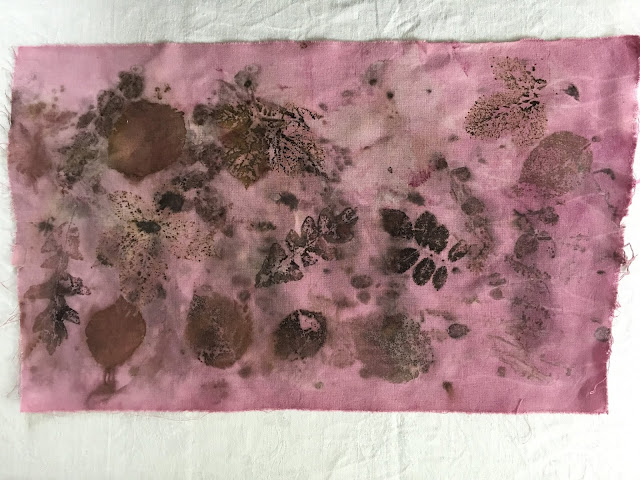 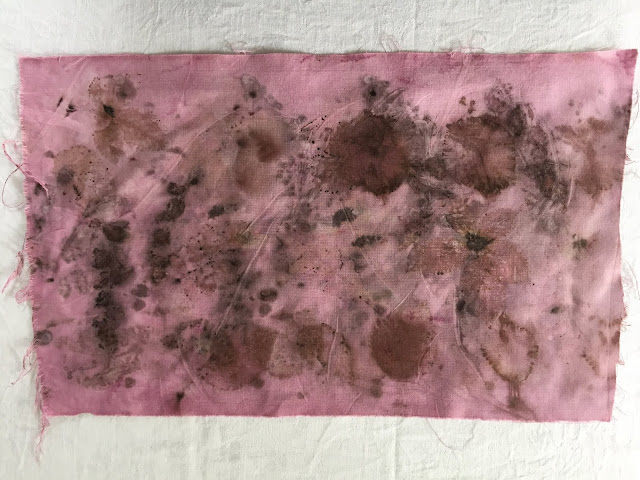 The pink colour brought out subtleties of the images both on the fabric and the paper that were not obvious previously. I was especially thrilled to see that the rose leaf prints on paper now had a colour not dissimilar to the fresh leaves giving the print an alive quality that I really liked. 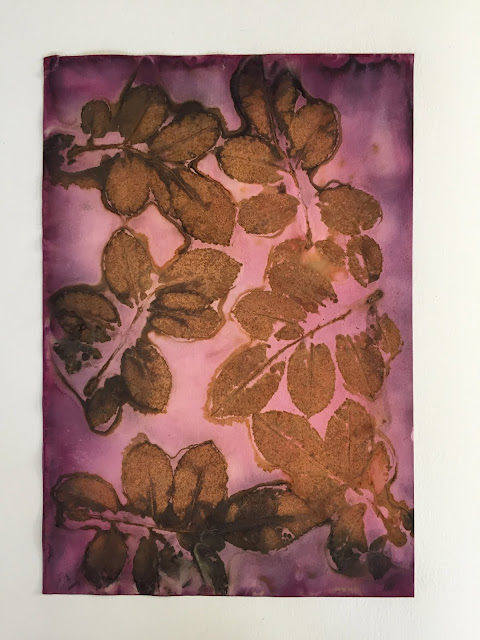 I've used some of the printed fabric and paper to make covers for some new homemade sketch books. I need a new book for recording the avenues opening up ahead and developing my witch's brew possibilities!

Sadly the Slamseys creative Summer Challenge ended on Friday but all the posts and prompts are still on the Slamseys Journal site here. Do have a look - there's nothing to stop you participating now or any time in the future you feel your creativity could do with a boost. 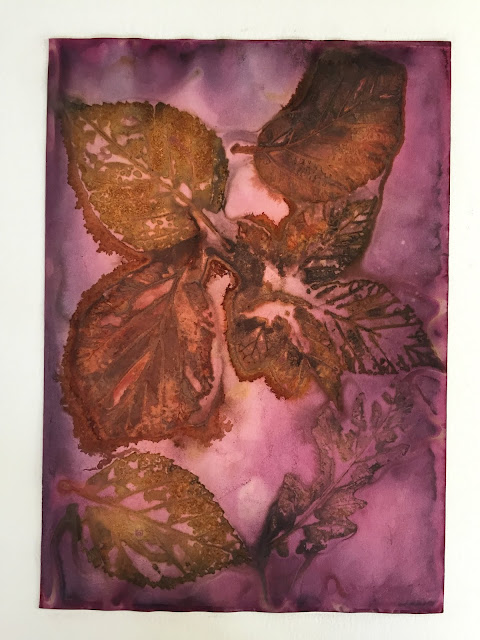 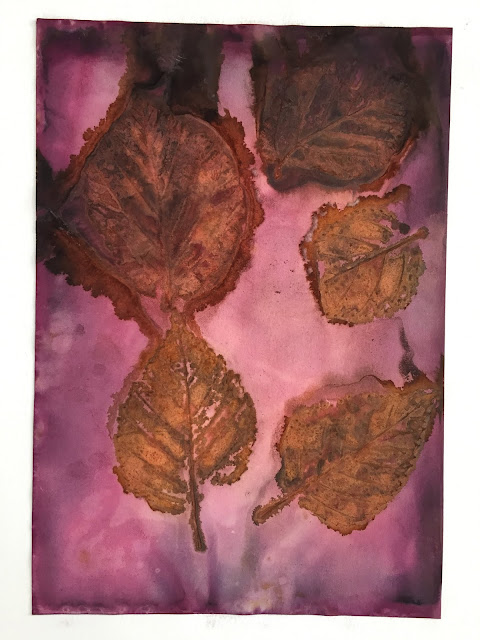 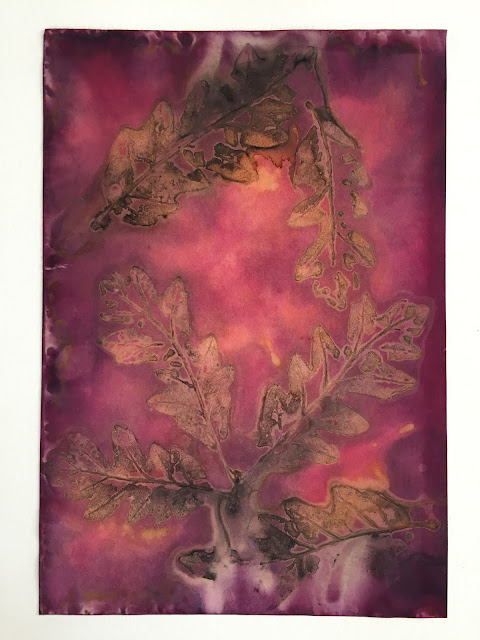 Both this year and last year, I've found it's moved me on creativity-wise in exciting directions I could not possibly have foreseen and has just been the best fun. 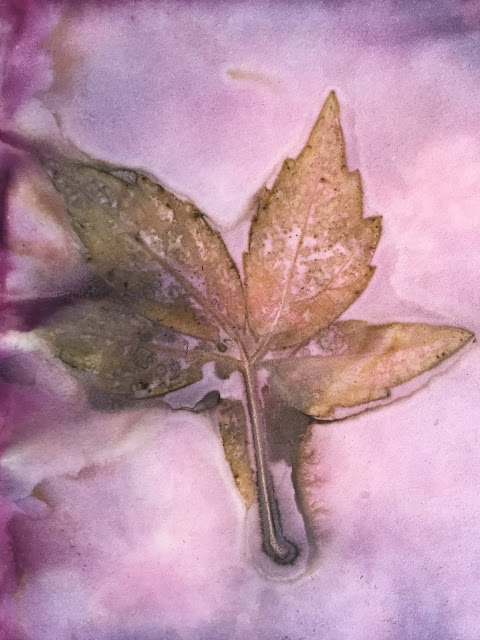 Thank you so much Anne.


Posted by Thomasina Tittlemouse at 09:32 4 comments: