In the supermarket the other day, while pondering the relative merits of what to make for supper, a copy of the September issue of "Making" magazine insinuated its way into my wire basket. I am not a frequent magazine-buyer as I think they are often very expensive for what they are, but every so often I succumb. Sometimes I get home and wish I hadn't and had saved the money; but sometimes I feel as though I've stumbled on a jackpot, figuratively speaking, for under a fiver. On this occasion, I struck lucky.

I like "Making" partly because it's all about what it says it is. Making things that is. Not a tiny handful of projects that are woefully outnumbered by a lot of other pages trying to get you to spend a great deal of money on stuff you don't need. I also like it because the projects range far and wide over a multiplicity of different crafts, so you'll find plenty of sewing ideas and knitting and crochet ones but also painting, mosaic-making, dyeing, beading, embroidery, felting, stencilling, recipes and even DIY stuff using wire, screwdrivers and pliers etc.

My eye was first drawn by a very fetching, glass-beaded lampshade on the front cover but that's not what I made. 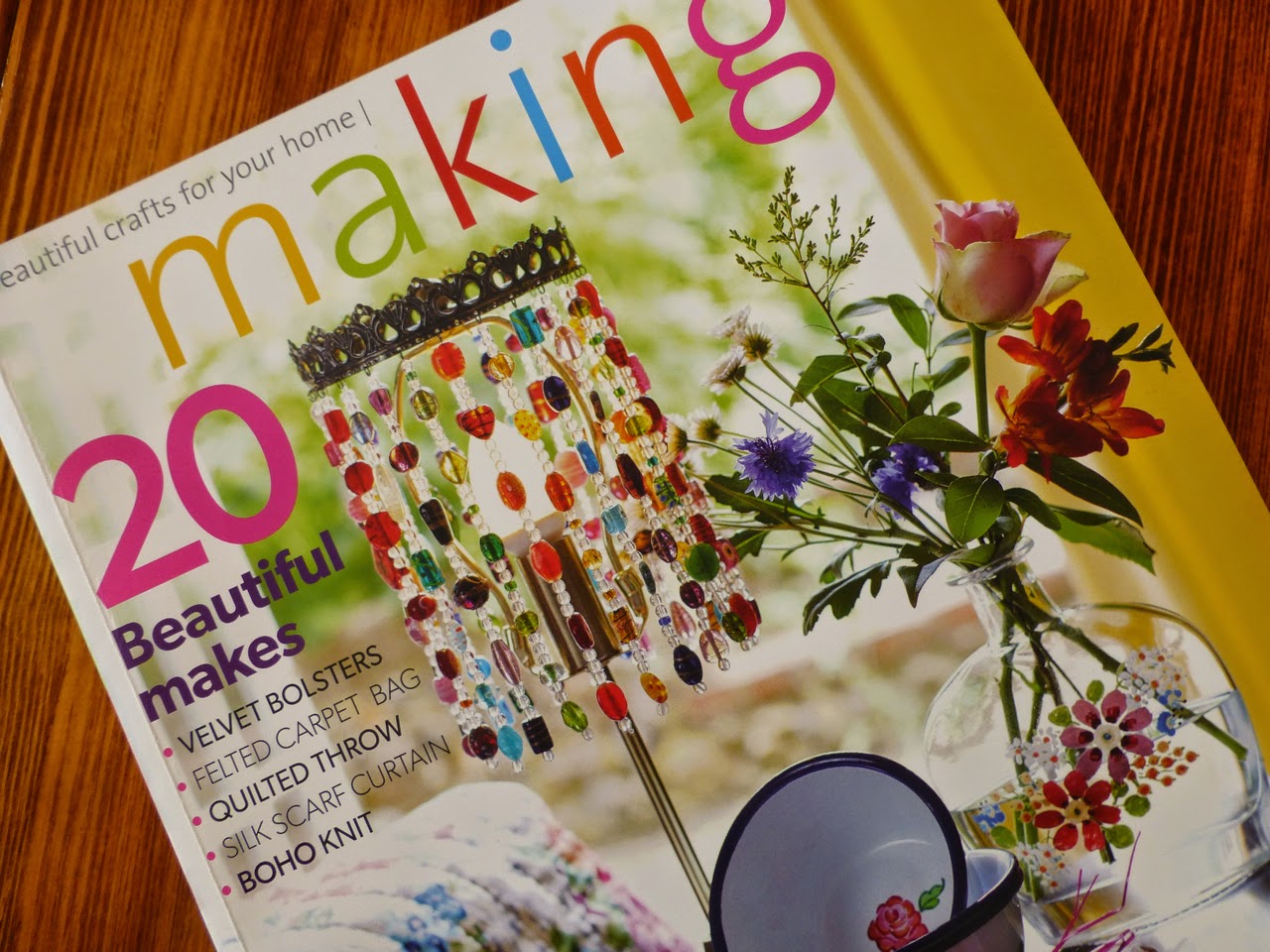 What I have made, is the skirt, featured on page 16, entrancingly named, "Last Of The Bohemians" with the captivating by-line "Make a swirly Boho Skirt in a mix of Indian colours to see out the last of the sunshine." 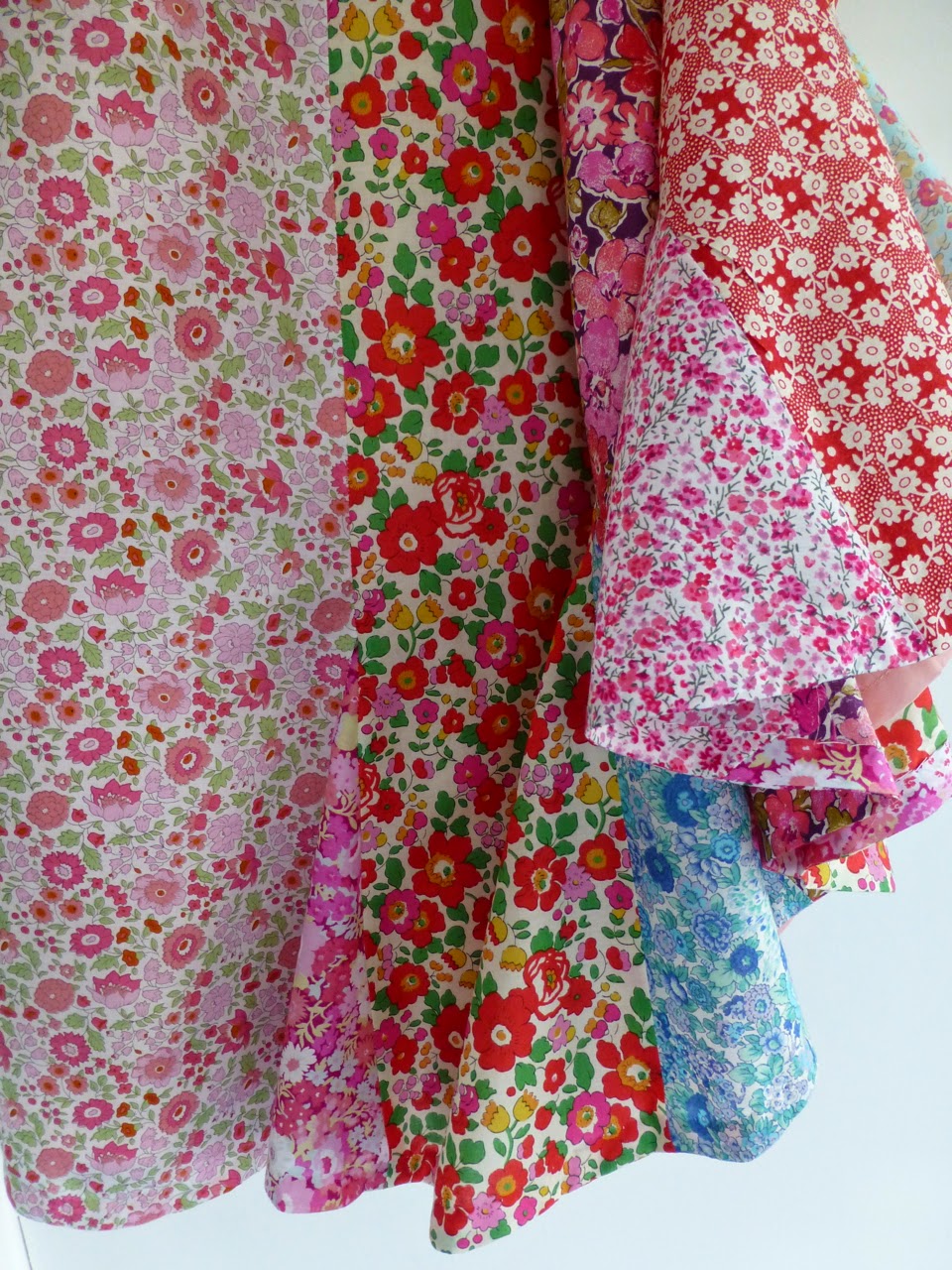 You betcha! Especially, as I am not quite ready to don proper autumnal layers yet. 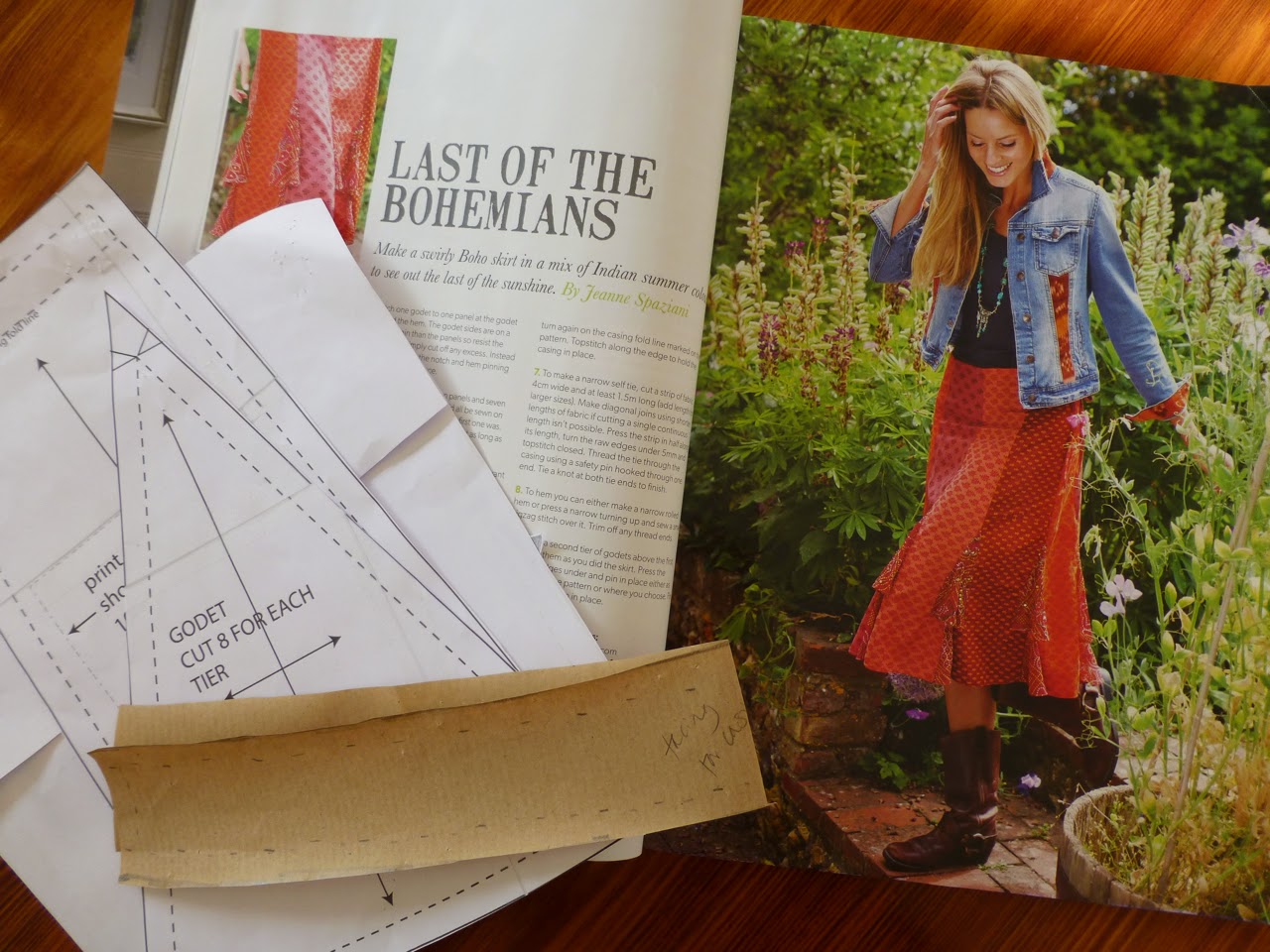 It has been a happy project that was totally delightful from start to finish and, apart from the magazine itself, it didn't cost me a penny because I made it from stuff I already had in the cupboard. The whole point of the skirt is that it is made up of different fabrics so you can raid your fabric box, (assuming you have one, and if you don't, I recommend starting one!) and piece together the eight skirt panels and eight godets* from whatever oddments you have.

*Never heard of a "godet"? Neither had I, before making this - it appears just to mean "triangular insert"and they are what give the bottom edge of the skirt its lovely, boho, swirly kick. 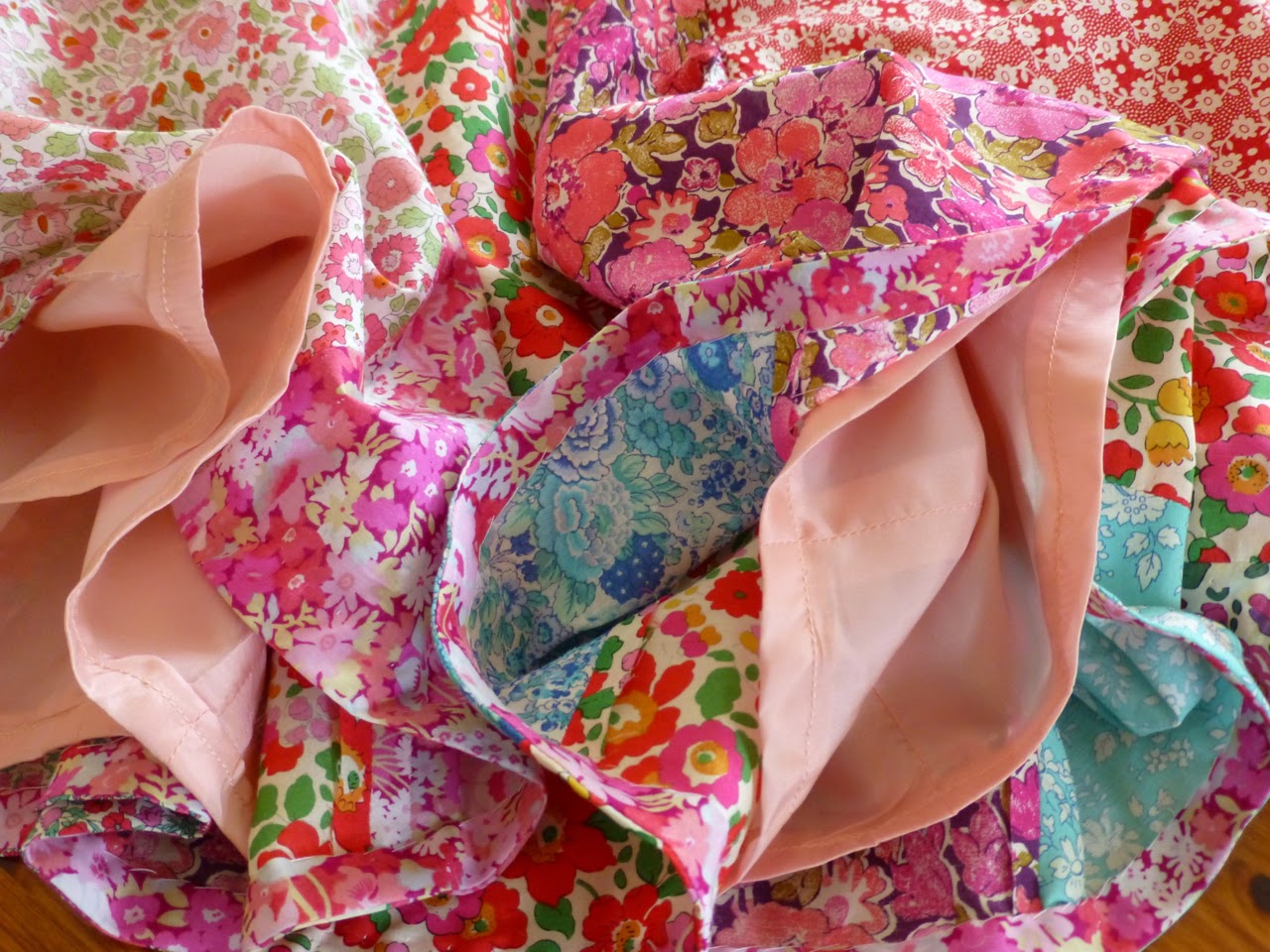 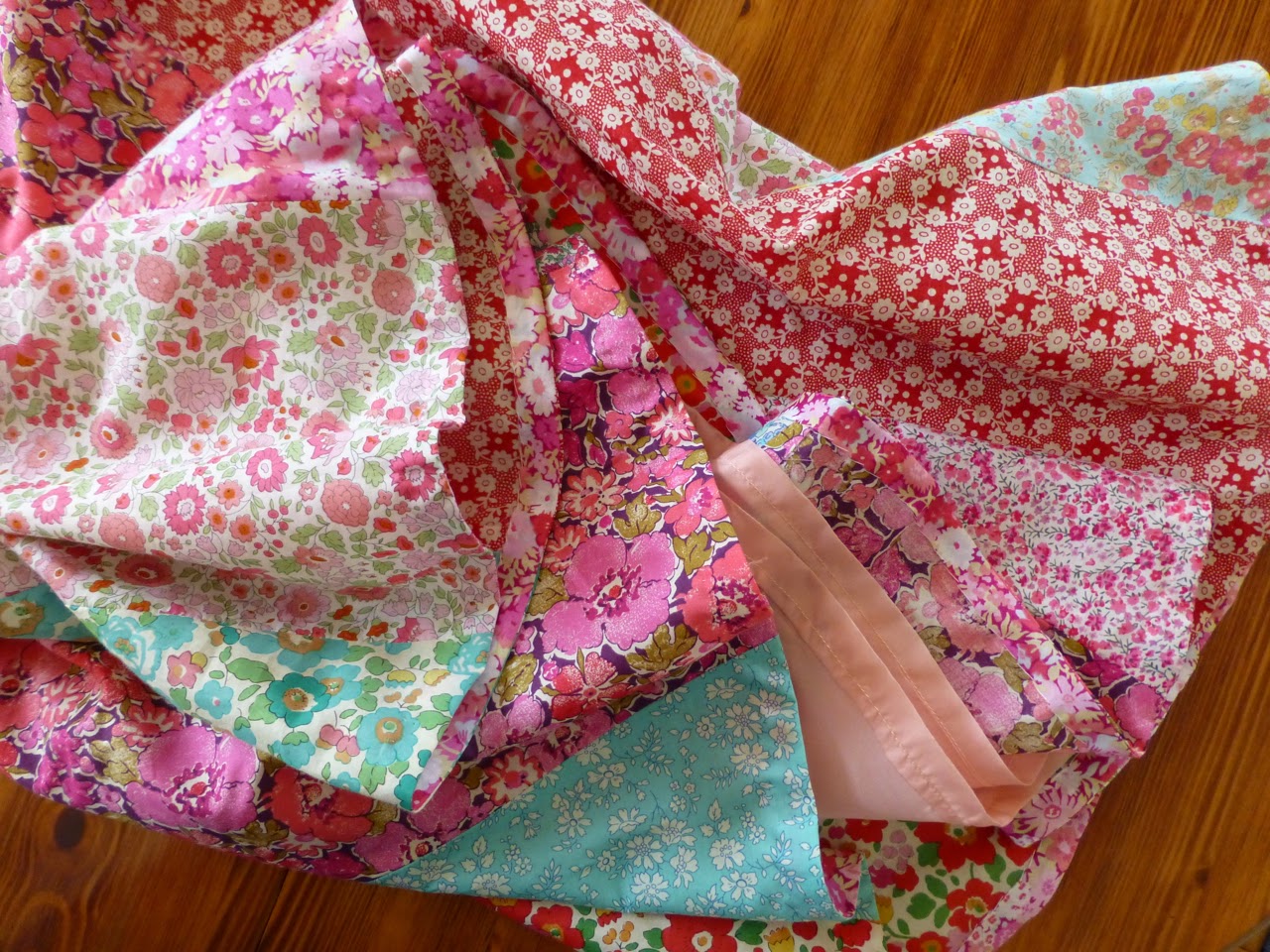 The pattern instructions are given in the magazine and there is a small scale version of the pattern given at the back (on page 89) which you can enlarge on a photocopier, but you can also download the full size pattern, for free, from the craftsinstitute.com website which I found easier.

The skirt takes about two metres of fabric, in total. In order to cut each panel in a single piece, you'll need a remnant for each one with a bit of width or length to it - fat quarters are no good here. But the panels are narrow so you can get two panels from half a metre of fabric or you could get one from a quarter of a metre so long as the patterning of the fabric design means you can cut the panel lying horizontally across the width of the fabric rather than vertically. I found four half metres of flowery fabric that worked fine like this and cut two panels from each fabric but nothing to stop you using eight different fabrics or any combination in between. The godets are small enough to cut from much smaller oddments - I used these eight different ones: 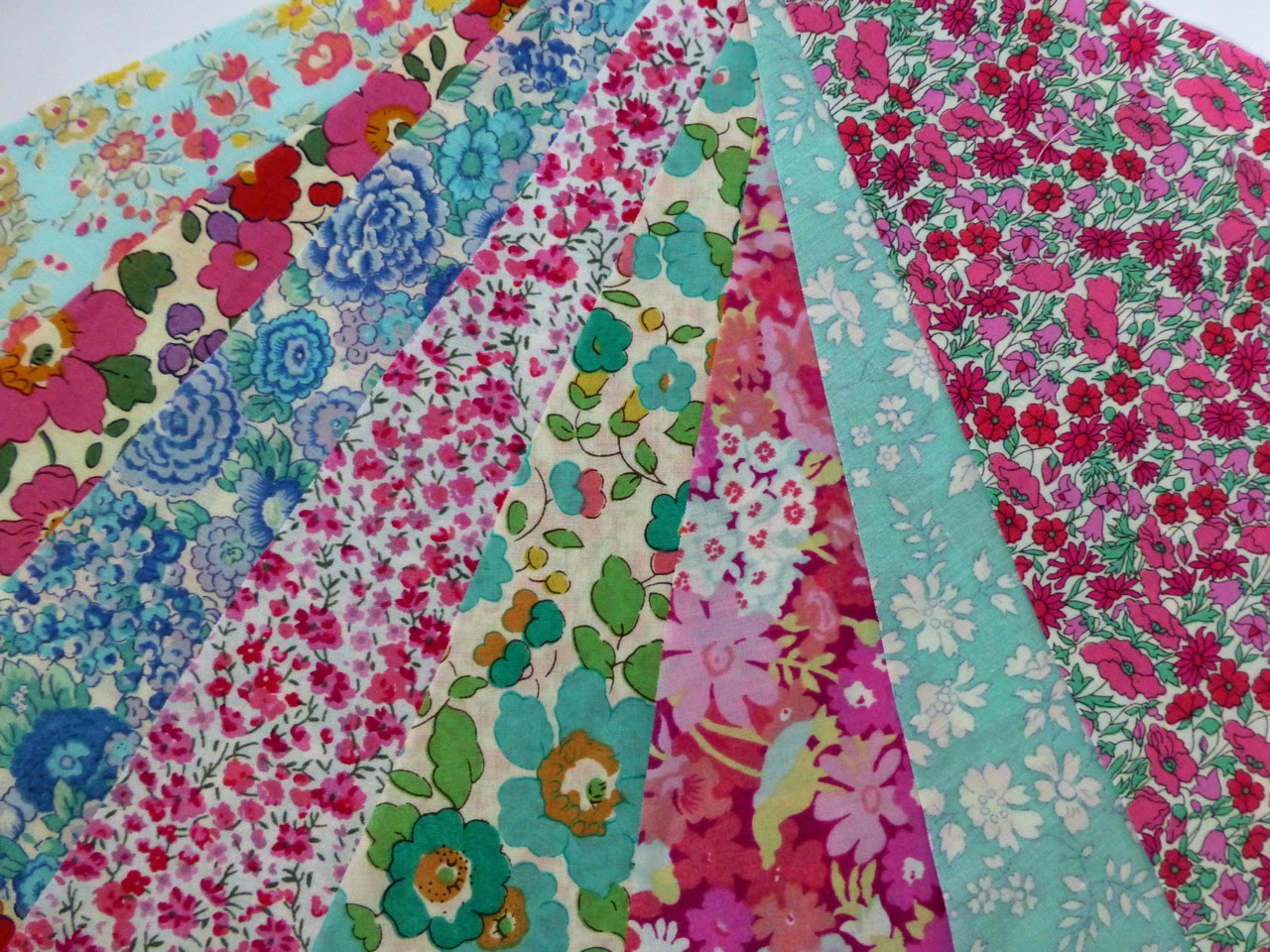 Just choosing the fabric was fun. Playing around with colours and patterns and scattering fragments of thread all over the carpet! Always good for lifting the spirits, I find. Because my fabric was rather lightweight - it's an assortment of odd bits of Liberty lawn, - I made a lining out of a spare bit of pink lining fabric which was also in my fabric box. This makes the skirt hang beautifully, gets rid of any translucency when you stand against the light and makes it just that little bit warmer to wear - perfect for an Indian Summer season garment. (if you want to do likewise, simply make up the skirt again in your lining fabric, (omitting the godets), and slip inside the outer skirt with the wrong sides of the fabrics facing one another. Tack together firmly at the top and treat as one layer of fabric as you proceed with finishing the waist, either as the pattern directs or, as I did, using a facing to "buy" you a bit of extra length in the finished skirt. 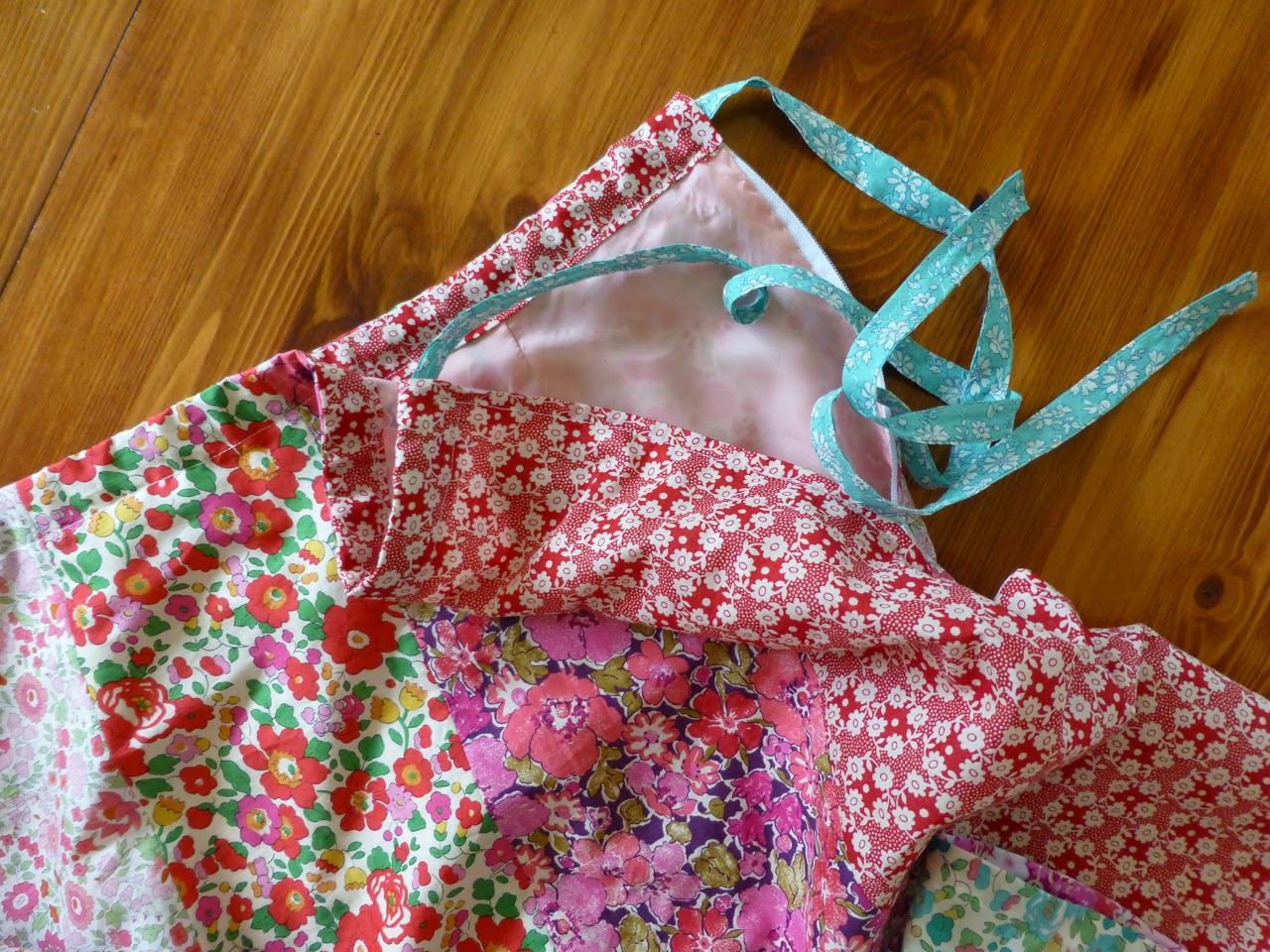 I added the facing from a spare bit of one of the fabrics at the top of the skirt, rather than making the drawstring channel by turning down the top of the panels as the pattern instructed, because the skirt is not that long and, being quite tall, I prefer my skirts slightly longer. You save a couple of centimetres like this. I added a few more centimetres to the finished length by cutting the panels a bit longer than in the original pattern and finishing  the bottom edge with a false hem, using bias binding stitched just inside the bottom edge, folded up and hand-sewn in place. 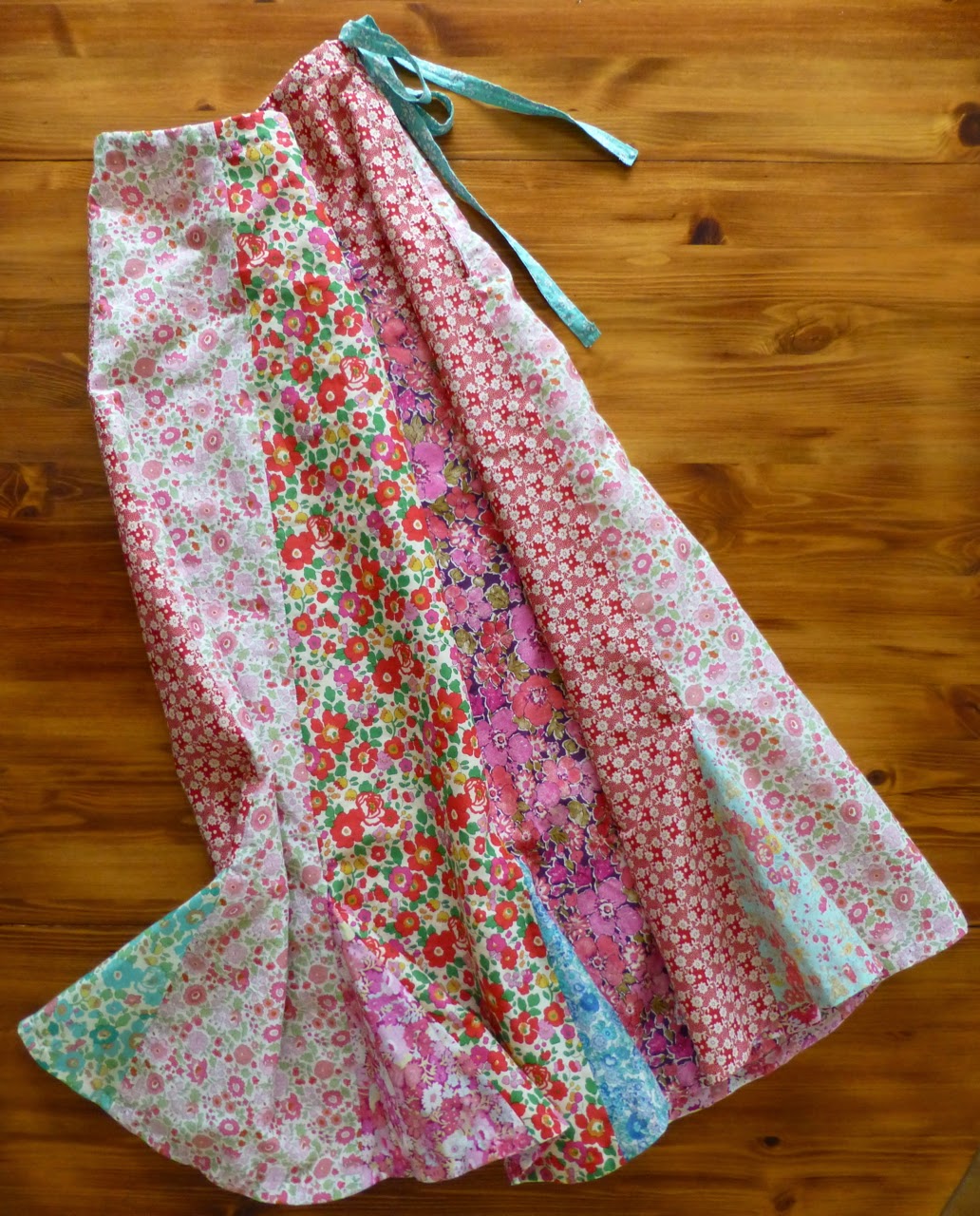 The drawstring is made out of some pretty bias binding that had been lurking for some time in my sewing drawer. The zip too, came from the recesses of the same place. It wasn't the right length but I just chopped off the excess. 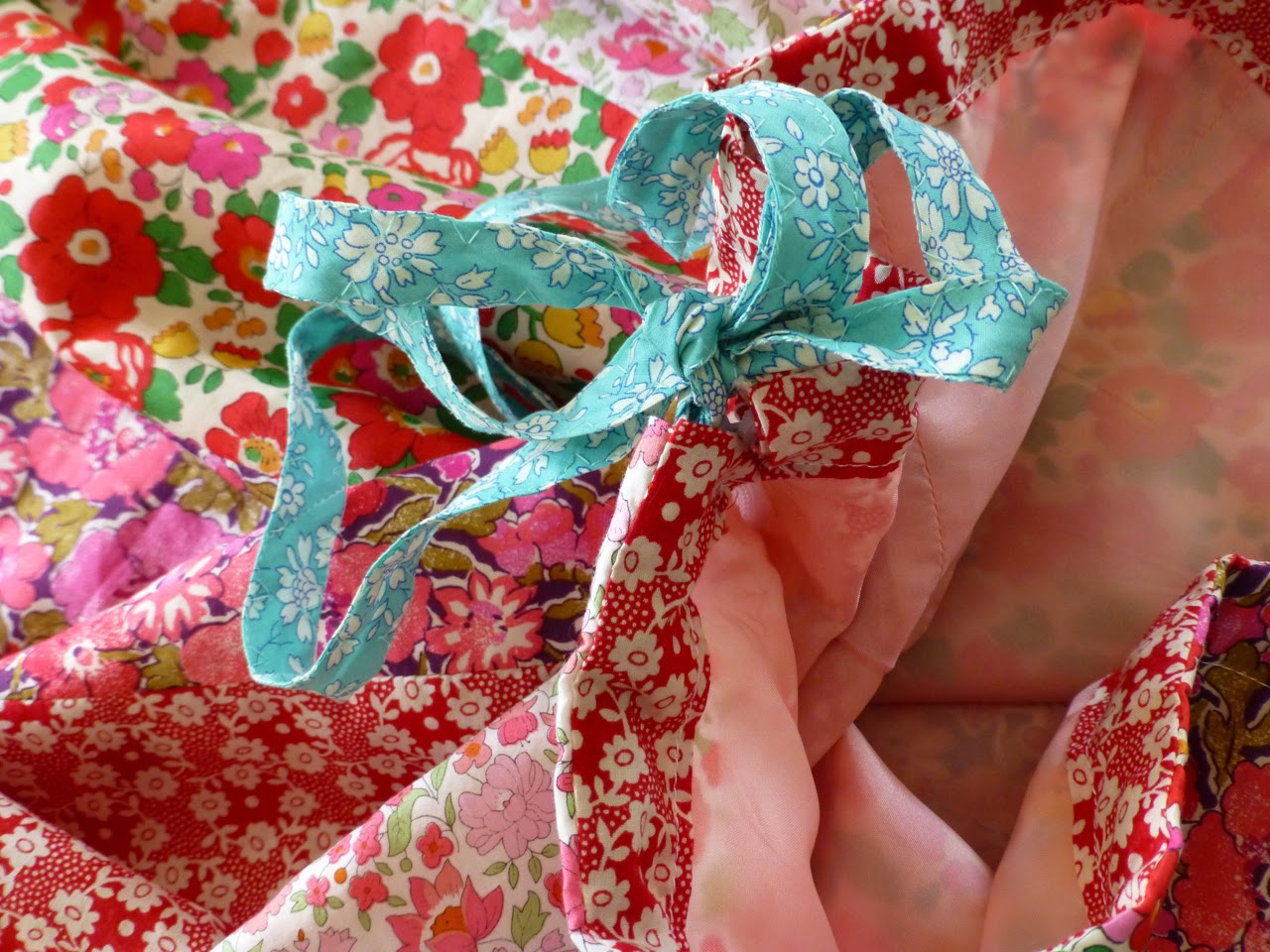 Of course, I had originally bought all these components - they didn't just drop off the apple tree in the garden, obviously - but there's something extraordinarily pleasing about conjuring up a pretty new garment without going shopping for anything and using the resources you already have. Seriously satisfying. 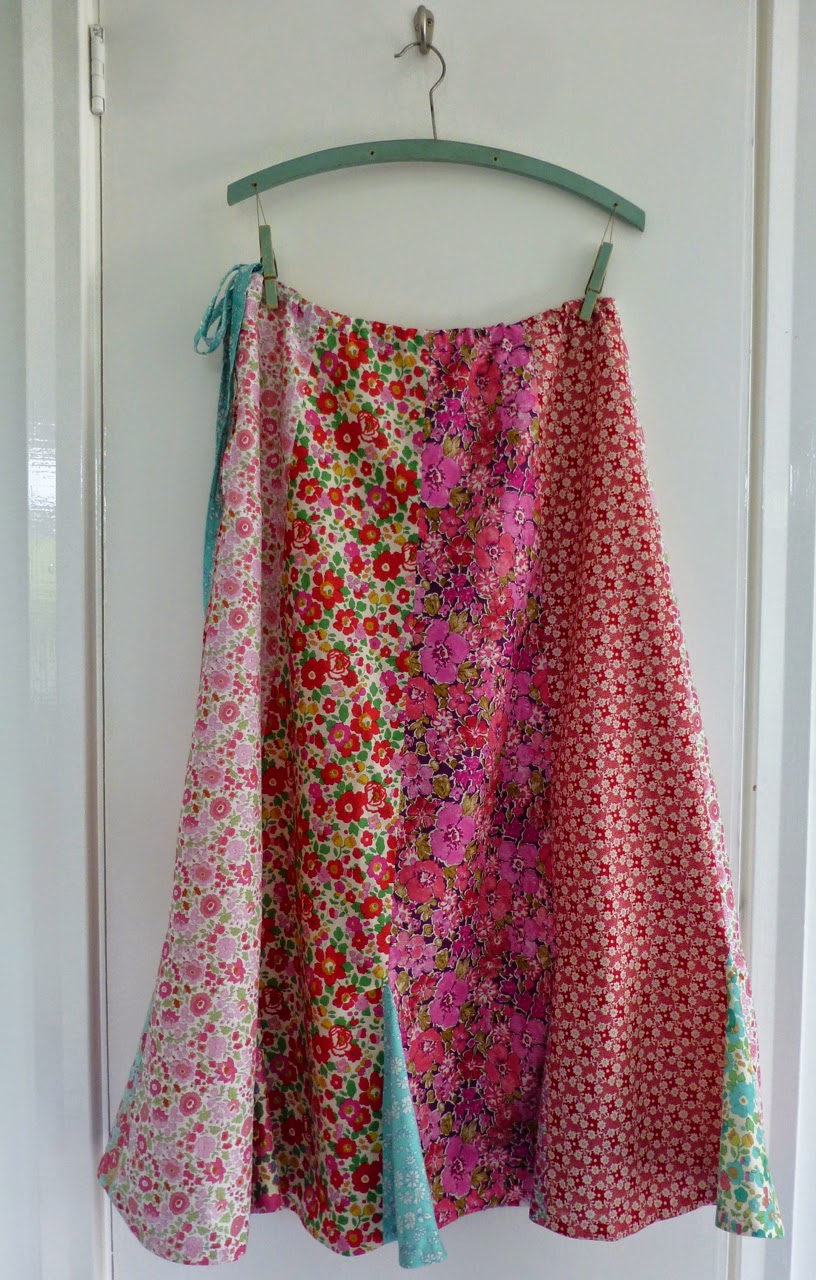 In the absence of a willing (or otherwise!) volunteer to photograph the skirt on me, I've photographed it hanging on a vintage skirt hanger dating from the "make-do-and-mend" era of the 1940s. It's an ingenious little creation made by my grandmother and consists of an ordinary, old, wooden clothes hanger, painted in some left-over, duck-egg-blue paint with small holes drilled at intervals along the wood. Through the holes, string was threaded, with which, wooden clothes pegs, painted to match, were tied on. The string had perished long ago and actually, I've been using the hanger minus the clothes pegs, but I got the urge to reassemble it and my mother dug out the original pegs and we restrung it using some very ancient linen "carpet thread", still in its original packaging, costing 3d, that had belonged to either my grandmother or her mother and is almost certainly of a similar 1940s vintage or older. (Not sure what "carpet thread" was used for but it's just right for this purpose - fine enough not to look too clumsy, but at the same time, tough and strong enough for the job in hand.) 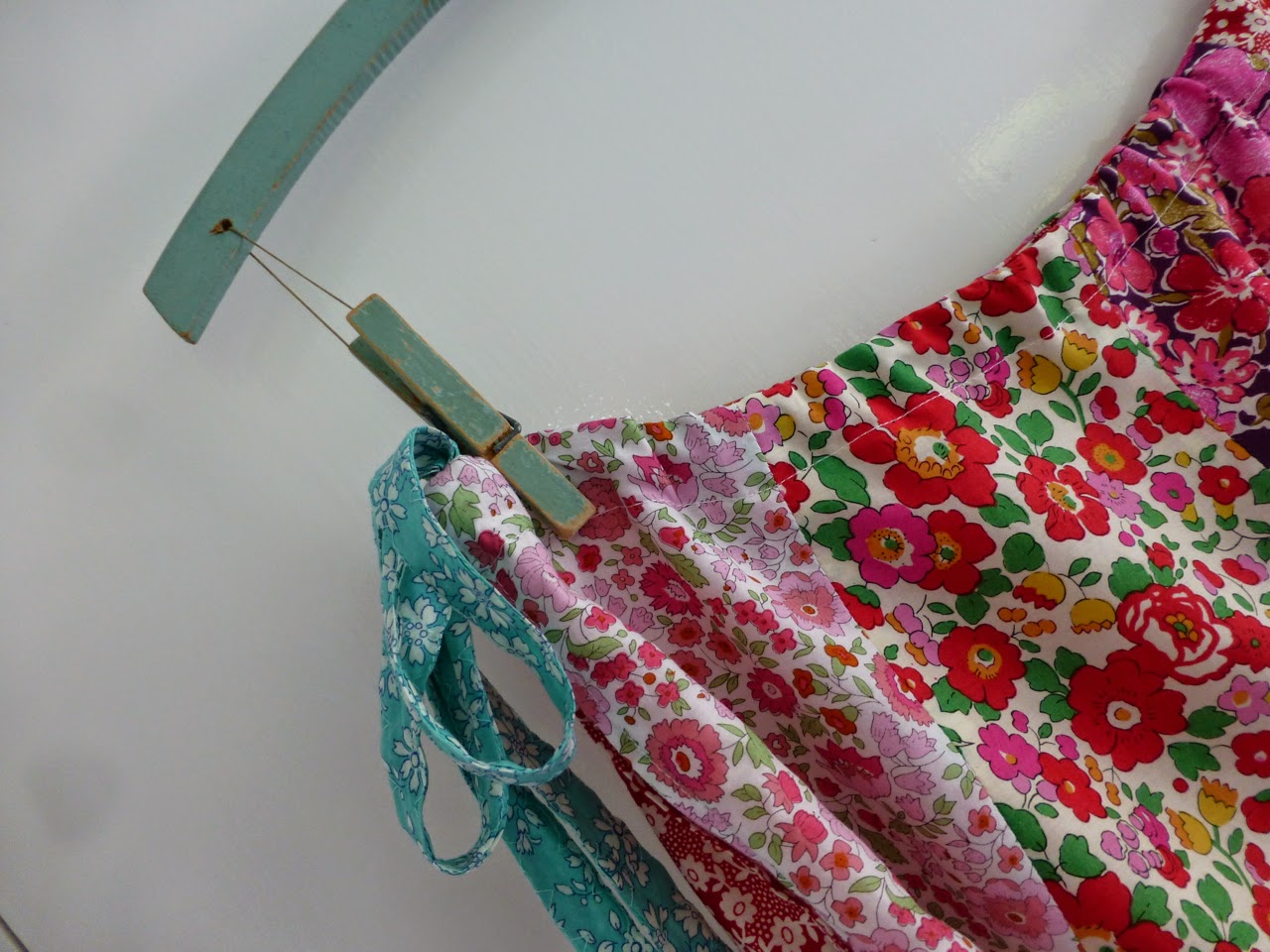 I can't think why I hadn't brought the hanger back to life in its original form before - works perfectly. In fact I feel the idea could have 21st C legs. Means you don't have to sew hanging loops or anything onto the top of the skirt. There are four holes drilled along the hanger in total, which means you can add extra clothes pegs and hang a second skirt on the same hanger.

Back to "Making" magazine. It also tells you how to prettify a denim jacket to wear with the skirt - see the pic of the article above. I'm in the process of completing that too. More on that in another post! And if you feel this is just what you'd like to wear a-top a boho skirt, as summer fades goldenly into autumn, but you don't have a suitable denim jacket in your wardrobe that's just begging to be dollied up a bit, make a bee-line for a jeans emporium or a thrift shop and acquire yourself one, post haste! I don't think you'll regret it! 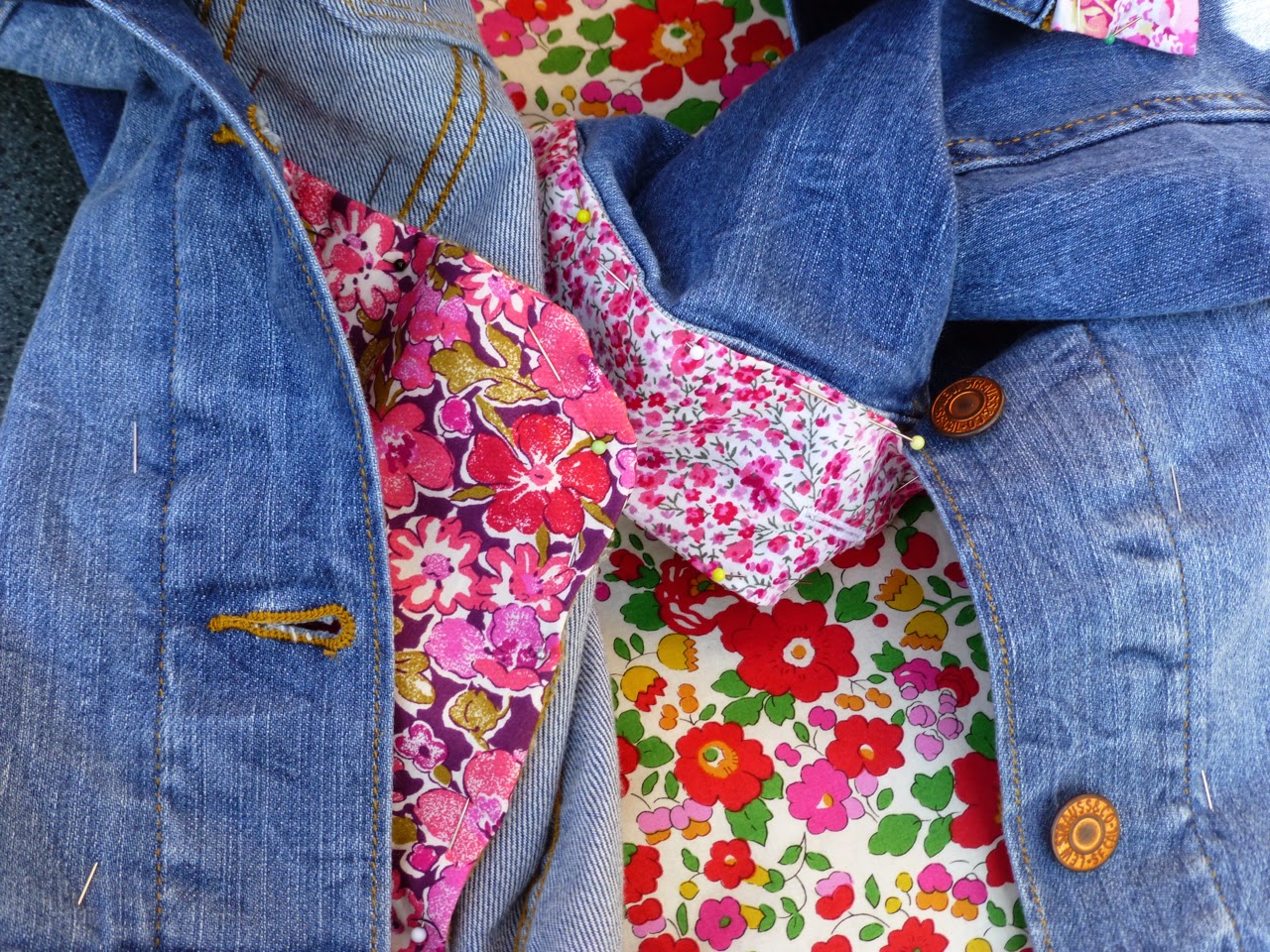 Wishing you all a happy Indian Summery weekend
(with a boho swirl, just for good measure!)

Posted by Thomasina Tittlemouse at 13:24 15 comments: