Hedgerow Hooking and Cooking (But No Dyeing)

This is the time of year when I realise all the things that I have not managed to do this year and, now that it's September, I probably won't get round to doing. In the past, I used to find this thought process quite worrying and could get myself rather stressed about trying to make good the various omissions that, I felt, were glaring at me and reminding me I'd "let the side down". Not sure whether this reflects some kind of guilt-complex or a puritanical, work-ethic gone mad - probably both! As I've got older, I've come to realise that this is a mistake. I like having projects a-buzzing in my head and it's inevitable that some will come good and others will fall by the wayside.  Sic vita. And all is not lost, if some things have to happen a bit later than I'd originally planned, or perhaps never materialise at all.

In truth, the real problem would be if the list of the things I wanted to do were to dwindle away and there was nothing left to complete. So, in a funny sort of way, it's reassuring that there are things I've planned on doing this year that haven't happened, and probably won't happen. This is what I tell myself anyway.

Among this year's no-shows are my plans to grow some dye plants, harvest them and dabble in a bit of home-dyeing. It started well - I bought a nice little packet of woad seeds and another of madder. Annie of Knitsofacto and I did a little dye-seed swap - I sent her some of the woad and madder seeds and she very kindly sent me some coreopsis, bronze fennel and purple basil seeds. But thereafter, I am afraid, my dyeing momentum stalled. Partly, it was the slightly worrying small print on the woad and madder seed packets, that warned you to be careful not to let either plant have too much latitude, or they would launch a take-over bid for the entire garden and, in future, like the insurgents in Afghanistan, become almost impossible to eradicate. Madder, it seems, also takes about four years to reach a point at which you can harvest it, so, producing a version of the dye, once used to dye British soldiers', eponymous "red coats", this year, was never going to fly.

Then there was my research into harvesting and using woad. Beautiful though the blue dye from woad is, extracting and using the stuff looked like one heck of a business. A stinky, smelly business too, as to my consternation, I discovered that the traditional method of dyeing with woad, uses a fermented vat of stale urine! The home woad-dyer is advised to keep such a vat "in a warm place, but outside, as it may smell"! You don't say! When I cautiously mentioned the possibility of setting such a vat up in the greenhouse here, the reaction was, shall we say, caustic and aggressively hostile! But my heart wasn't totally in fighting my corner on this one, as the sheer, noisome reality of the idea of a pong-along vat, roasting all summer, only yards from the back door, giving off fumes, not just to scare the postman*, but gas him, and us, in the process, sank in. Perhaps, on second thoughts, no woad-dyeing, this year! The coreopsis, bronze fennel and purple basil are much less noxious but I just haven't had time this summer to turn them into dye. Hopefully, next year I will though, as I still have some unplanted seeds.

*See Jane of Plain Jane's witty comment on my last post about having hung up a fermenting marrow that had this effect on her unsuspecting postie!

So, no happy dye-pots have bubbled on my hob this summer. But, sometimes a failed plan can trigger a happy, related alternative. My friend, Christiane, gave me some wonderful yarn that she had dyed herself for my birthday, including, coincidentally, some yarn dyed with madder. 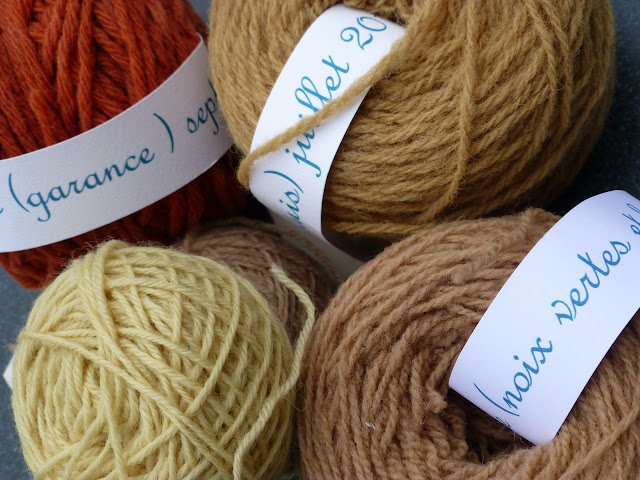 Each skein has a beautiful label printed in curly, turquoise letters giving the name of the dye-plant used, and the date of the dye batch. The plants have enchanting French names that I didn't know: "garance", "millepertuis" and "achillée millefeuille". A little look in my Larousse deciphered these as: "madder", "St John's Wort" and "yarrow" respectively. The names sound much more musical in French than their English counterparts, don't they? There is also yarn dyed with "noix vertes" - "green walnut" and "écorces" - "bark". Together they make a soft natural palette of bleached, pale green, taupe, caramel, mink and russet bronze.

So after my own dyeing plans died, I turned my thoughts to using Christiane's beautiful hand-dyed results instead. 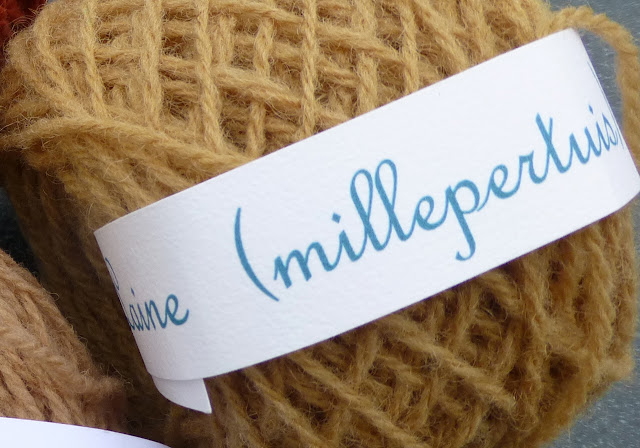 What to make though? Something autumnal, I felt would be appropriate; perhaps an autumn tea cosy? The more I thought about the idea, the more I liked it and seeing the hedgerows, thick with colourful fruits and berries, gave me another idea too. I would hook up an autumn tea cosy in the soft, natural colours of Christiane's hand-dyed yarn and top it with bright, hooky berries and fruits, nestling among a bunch of hooky leaves. A perfect end-of-summer / September project.

Want to see the results? Here they are! I say "they" because having made one tea cosy, I found there was enough yarn for a repeat. The second is a birthday present for my mother. 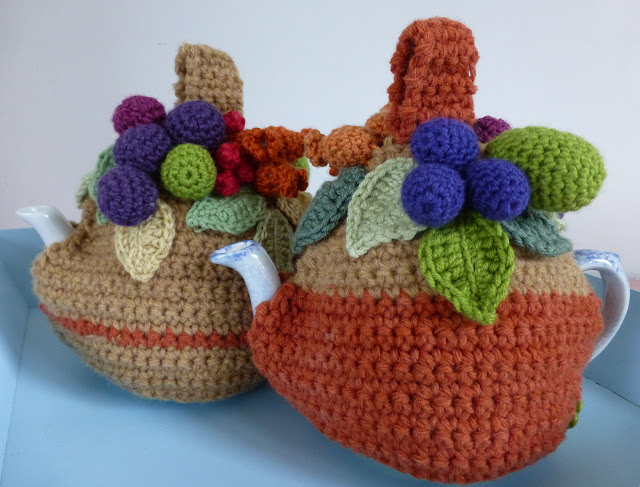 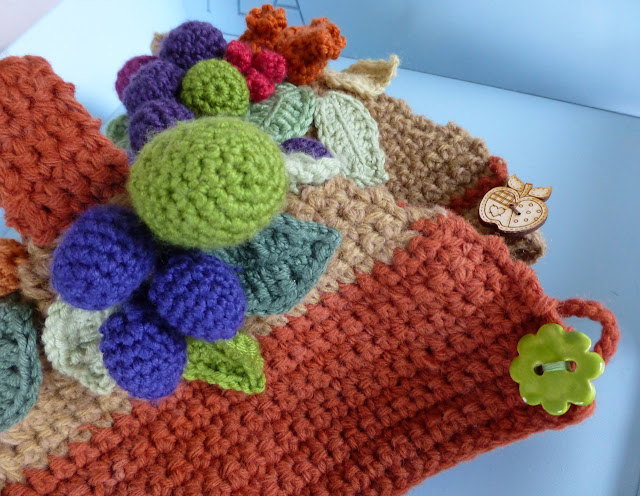 The tea cosies are made from Nicki Trench's tea cosy pattern in Cute And Easy Crochet although I've adapted it slightly, to make a button fastening as this makes the cosies easier to take on and off the tea pot. The blackberries come from the same book - they are the raspberries in Nicki's hooky pavlova pattern, just hooked up in blackberry, rather than raspberry, colours. The hawthorn berries are adapted from the holly berries in Lesley Stanfield's 100 Flowers To Knit And Crochet. 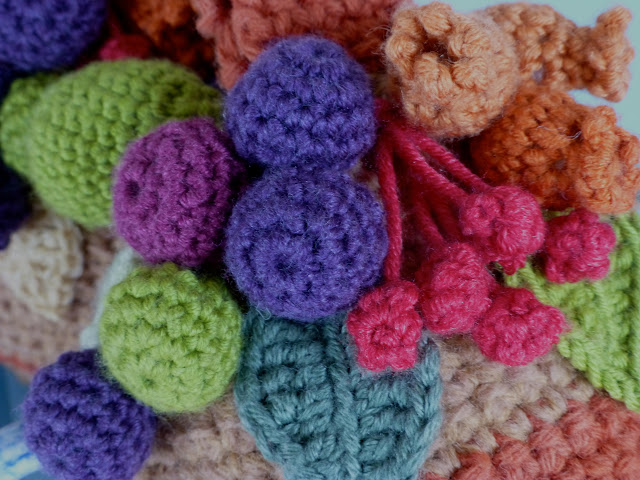 The leaves are a slightly bigger adaptation of Lucy of Attic 24's pattern here and the green walnut, sloes, and rose-hips are my own designs. 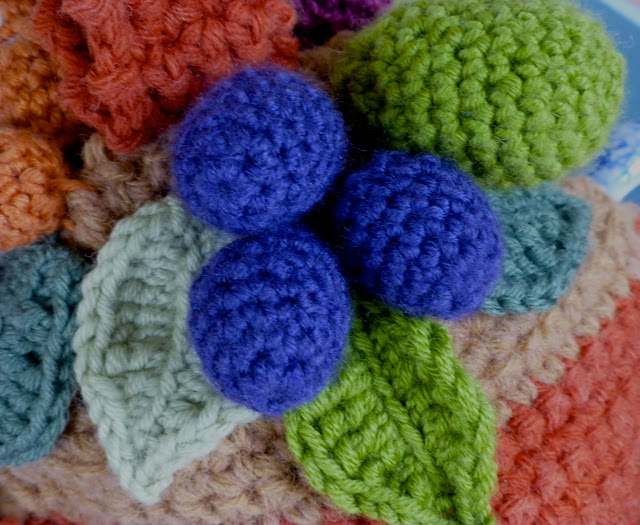 I am particularly pleased with the rose-hips, with their crinkly tips. 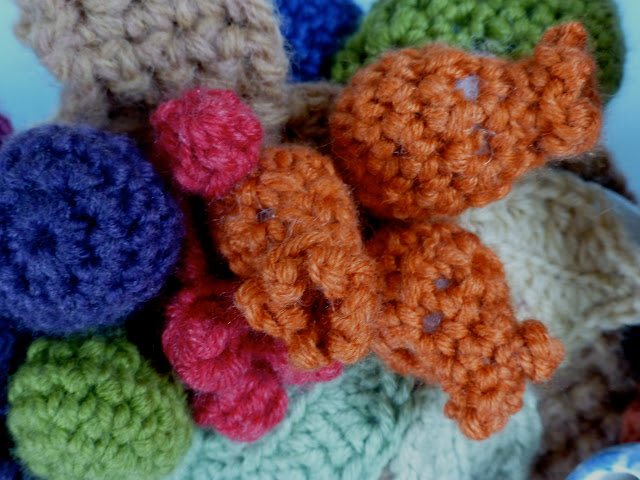 All the fruits and leaves were just made with oddments of leftover yarn, in the appropriate colours. None of them use very much so are perfect for using up odds and ends.

Fun aren't they? And the perfect accompaniment to an autumn-tea-time, toasted muffin with hedgerow jelly. 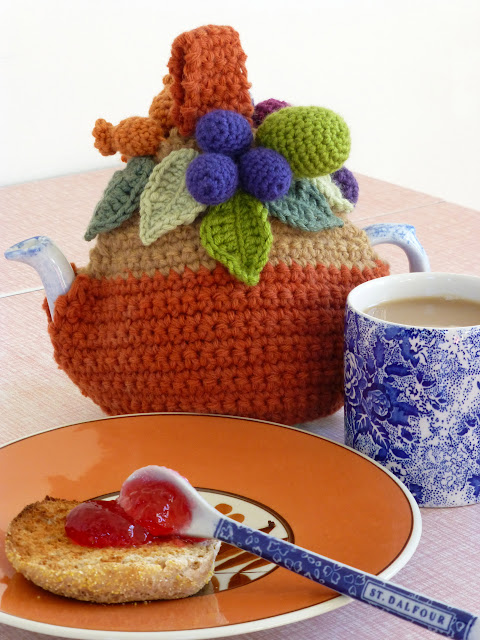 A couple of people have asked me for my English muffin recipe so here it is.

It's an adaptation of the recipe for English muffins in The King Arthur Flour Baker's Companion and  seems to produce a classic English muffin pretty much like the commercial ones.

For shaping and finishing the muffins:
a couple of handfuls of cornmeal or polenta

Four hours or so later, mix the remaining ingredients, together with the starter, to form a pliable dough which needs energetic kneading for five to ten minutes. I am afraid I cheat and put the whole lot in the bread-maker on the pizza-dough setting, which works a treat and saves a lot of time and effort, but don't let me stop you doing it by hand, if time and inclination lead you that way.

Leave the dough to rise for an hour or so. (If you are using the pizza-dough setting on your bread-maker, just let it finish its programme - mine takes 45 minutes and that's enough) Preheat the oven to 170 C. (Yes, that surprised me too - it seems very low for baking any kind of bread dough but trust me, it works!)

Tip the dough out onto a work surface which you have sprinkled with a handful or two of cornmeal. Press gently into an A4 sort of size rectangle, about an inch deep and sprinkle the top with more cornmeal. The cornmeal gives a lovely authentic crunch to the muffin surfaces.

Now get a 3" diameter biscuit cutter and cut out about 12 muffins. I've played around with making both fewer and more from this dough quantity and I've concluded that 12 is the number to aim for but, of course, you can make more smaller ones, if you prefer. Place on a baking sheet lined with baking parchment. 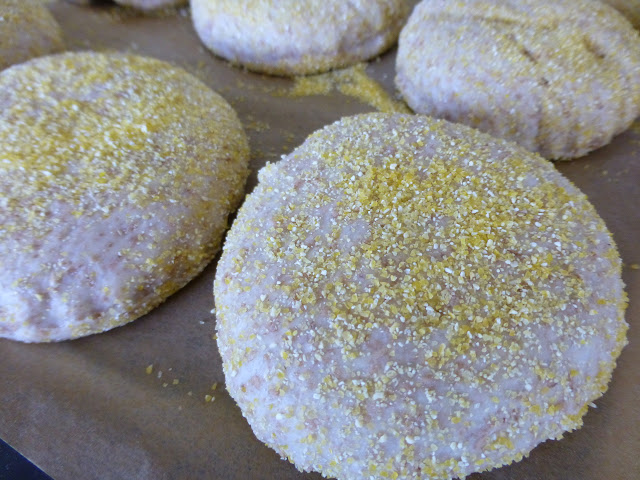 You can leave the muffins to rise a bit at this stage, if you want to, but Mrs T is impatient and doesn't and I've found they work fine. Bake for about 25 minutes until risen and browned but not overcooked. Cool on a wire rack. 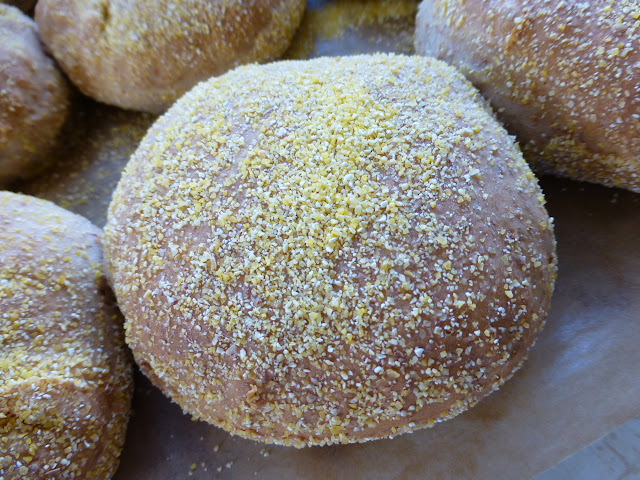 When the muffins have cooled, split and toast them and while still hot from the toaster, grill (or log fire), pile on a spoonful or two of homemade jelly or jam, and eat for a taste of sheer autumn bliss; (ideally with tea, from an autumn-tea-cosy-clad tea-pot!) Any leftover, untoasted muffins freeze beautifully. 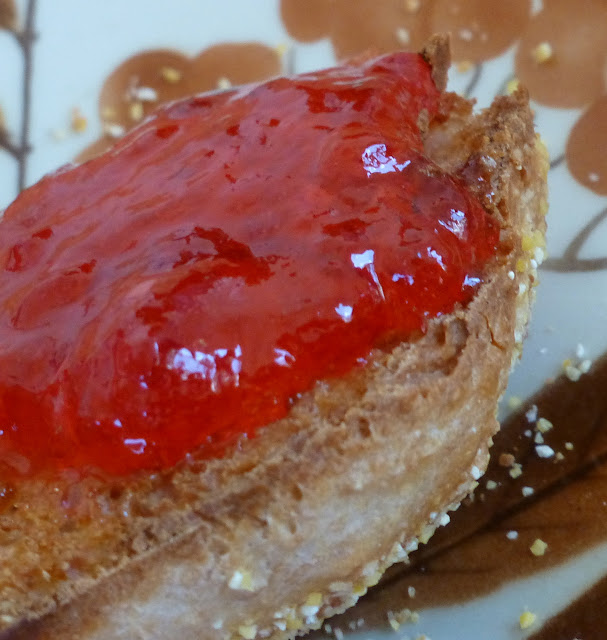 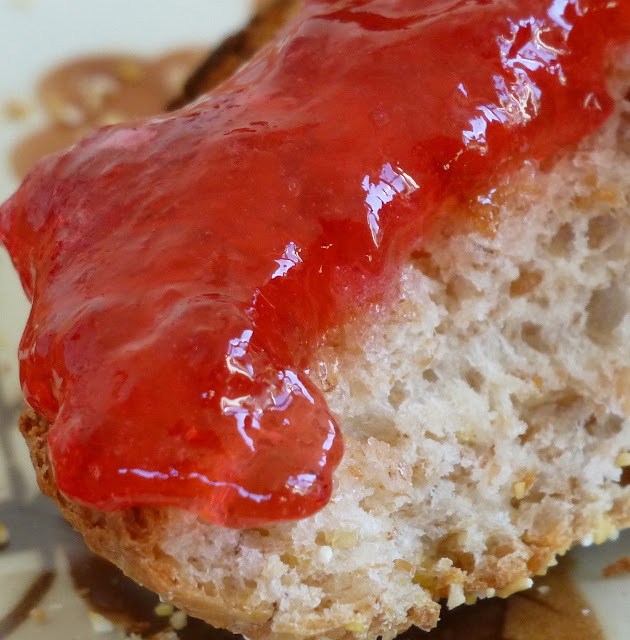 The jelly here, if you're interested, is a mixed hedgerow jelly made from crab apples, elderberries and hawthorn berries. More crab apples than the other two. It's a rather vivid, carnelian colour but I promise you that's the genuine article - no added colouring or photoshopping!

They were harvested yesterday, on what looks as though it may have been the last hot, late-summer day of the year here and the jelly tastes exactly like the landscape they came from - sunny, warm, aromatic and mellow. 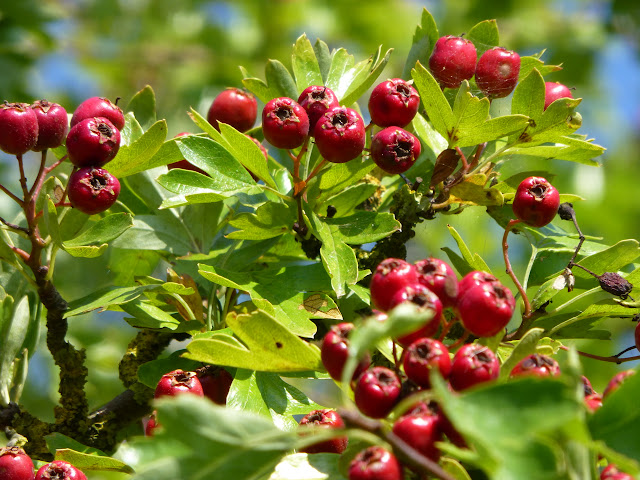 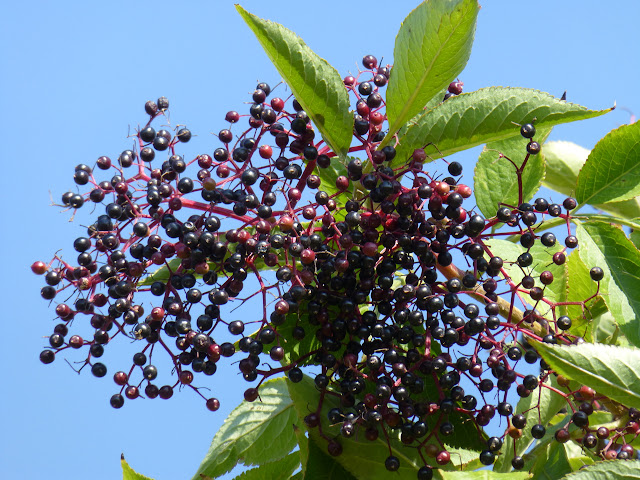 Elderberries can be a bit much of a good thing in large quantity and when I cautiously bit into a hawthorn berry, it didn't taste all that great, raw on its own, so I kept the proportions heavily weighted in favour of the crab apples, as in only 250g of mixed elder and hawthorn berries to 800 g crab apples. The results indicate that those proportions, for me, work very well - giving just enough aromatic tartness to balance the sweetness but if you want a stronger flavour you might prefer to increase the elder / hawthorn quotient. 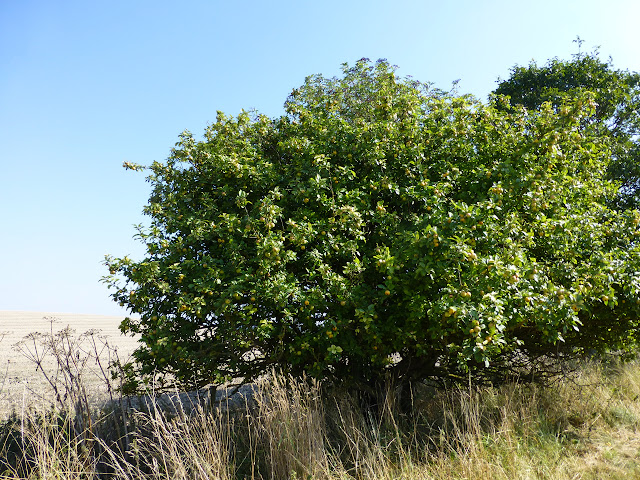 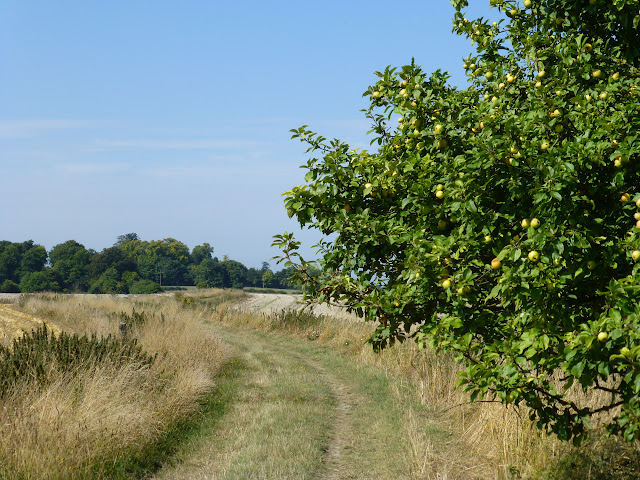 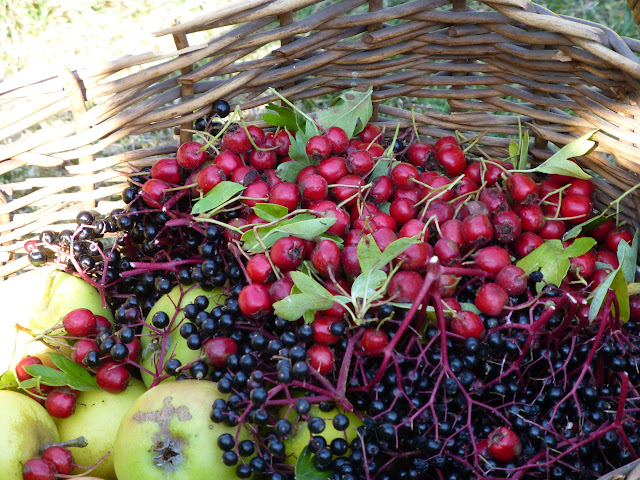 So while I have scored nil for dyeing, I am appreciatively enjoying someone else's beautiful hand-dyeing and I have enough hedgerow jellies, of one sort or another, to keep muffins and scones a-topped for months, possibly years! 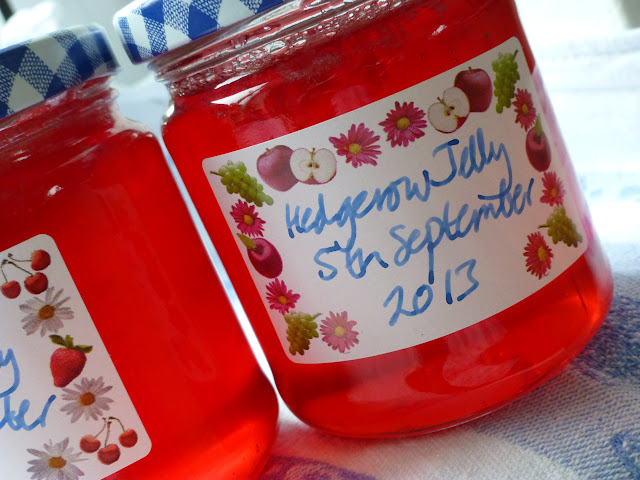 And if you come to tea here, you know what you'll be getting!

Posted by Thomasina Tittlemouse at 17:37