There are some things that seem relatively commonplace to make at home and some things that seem faintly exotic, unexpected or even downright daring, if you know what I mean. What is homemade around you as you grow up, has a lot to do with what falls into which category, I think. Different for each person, by definition. My mother always baked cakes and biscuits, made her own pastry and preserves, wove baskets and sewed most of her own summer clothes so I take it pretty much for granted that these things can come via the homemade route. There's nothing exactly ground-breaking to me about making them yourself. She didn't bake her own bread, (or only very rarely as a kind of scientific experiment); we never made yoghurt or churned ice cream. She never sewed a pair of trousers and there are sundry other things that never made it on to the "make it yourself" agenda when I was a child. So these things, which in other households might well seem run of the mill to make yourself, seem very much not-run-of-the-mill to me, but instead, quite adventurous.

Blankets are one of these items, although in many ways they are an obvious and straightforward thing to make. But to start to make a blanket from nothing more than a ball of yarn and a hook (or a pair of knitting needles) has always felt to me slightly like a daring venture into strange and exotic territory. 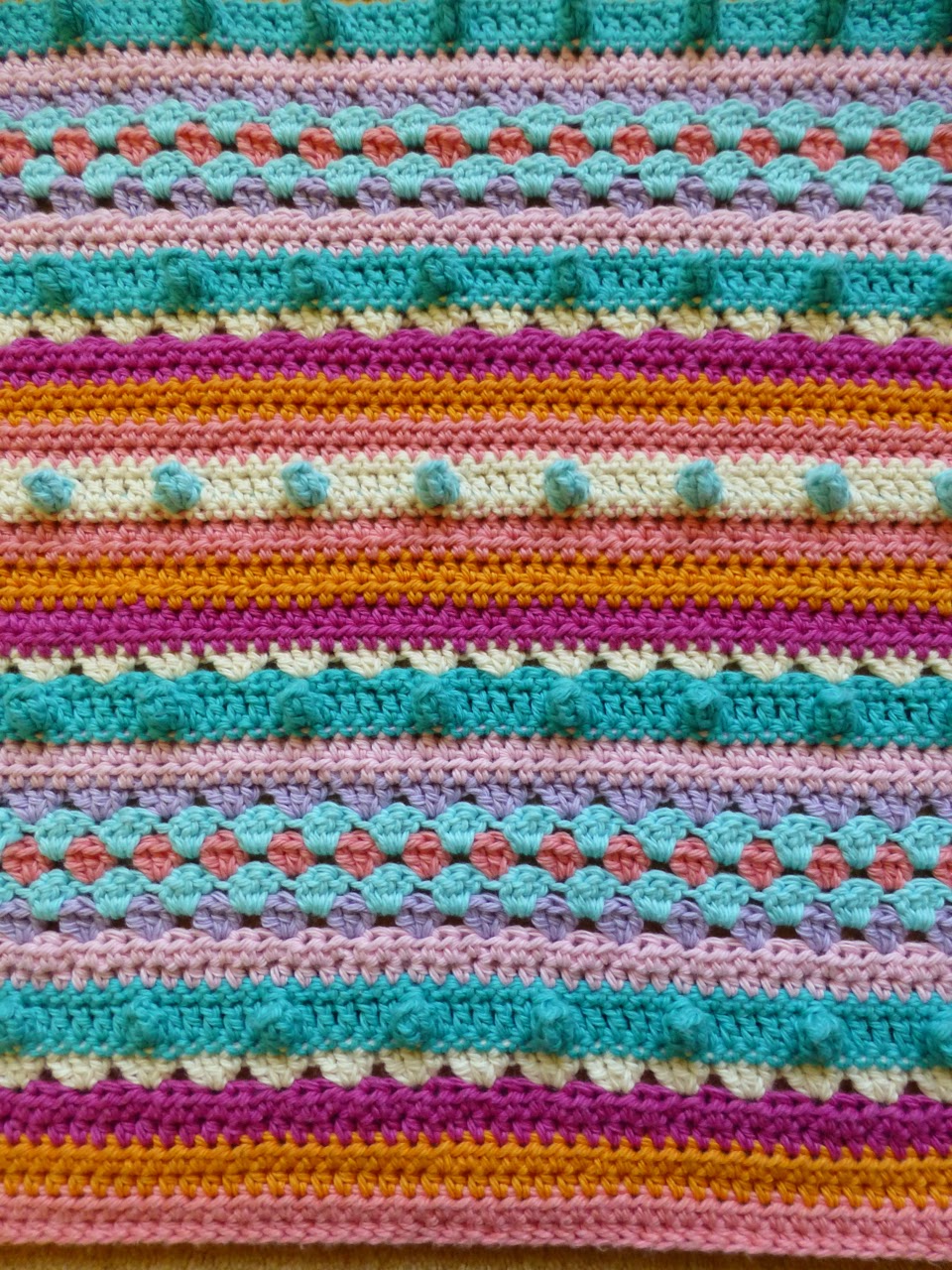 Uncharted waters where magical creatures might lurk or an iridescent mermaid might pop up. I can't explain it quite. Especially when having made a handful of blankets, the mystique really ought to have gone by now. But it hasn't.

Of the two types of homemade woolly blankets, the modular sort, (made from lots of small, repetitive motifs that get joined together, either as-you-go, or at the end), and the incremental sort, (made by adding rows continuously to a single piece of ever-growing fabric), I slightly prefer the incremental kind, as I find it harder to keep going with the modular sort, on anything of any significant size. I get bored and lose momentum. Mrs T has the attention span of a gnat, clearly!

Being January, a cold, bleak and rather colour-drained month at the best of times, despite the odd, beautiful icy sunrise - these pics are all taken around 7.30 in the morning on my cold, early morning forays into a dark and bracing countryside when I walk, think, and breathe great lungfuls of icy air, to fuel the day ahead - 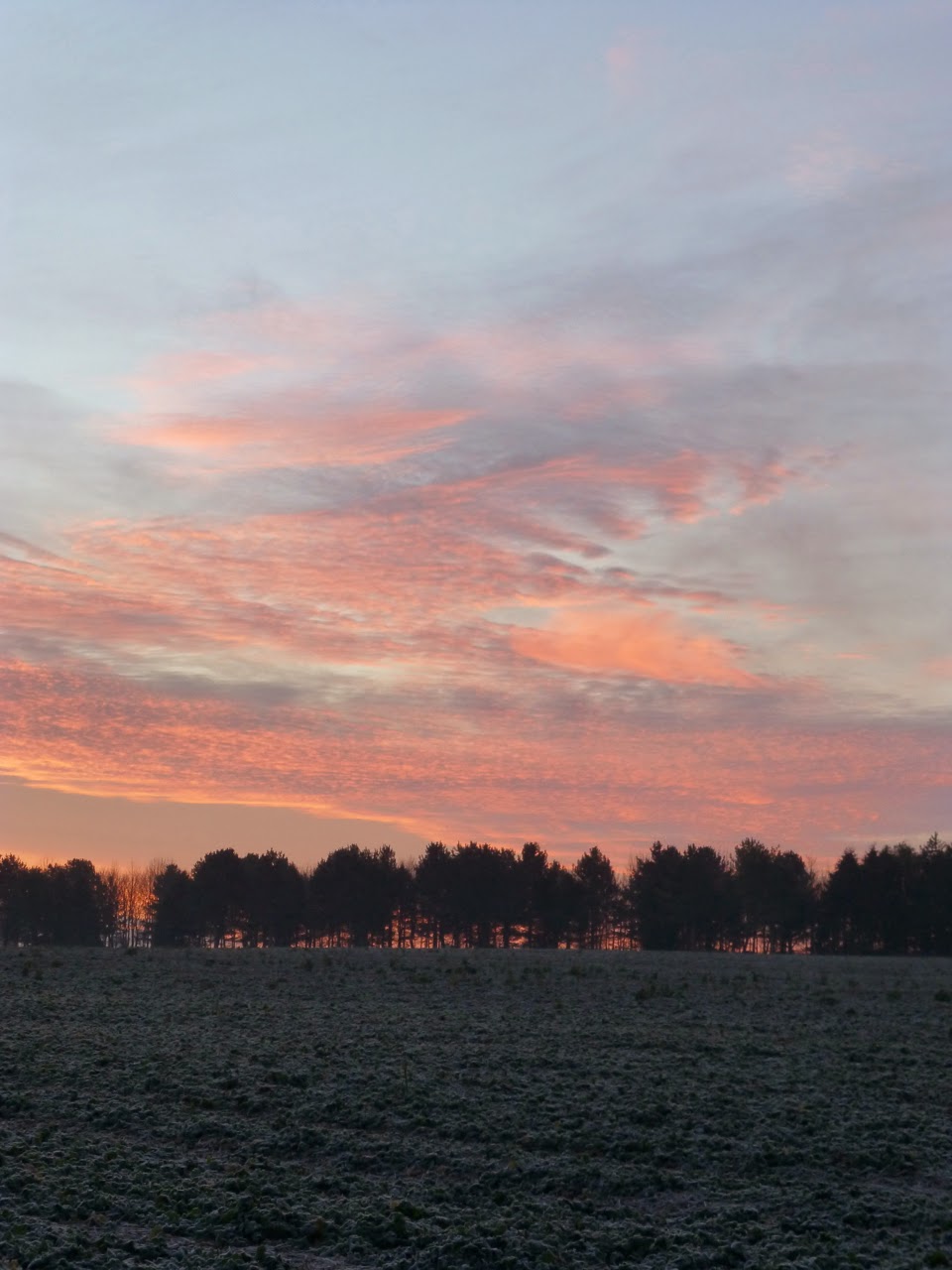 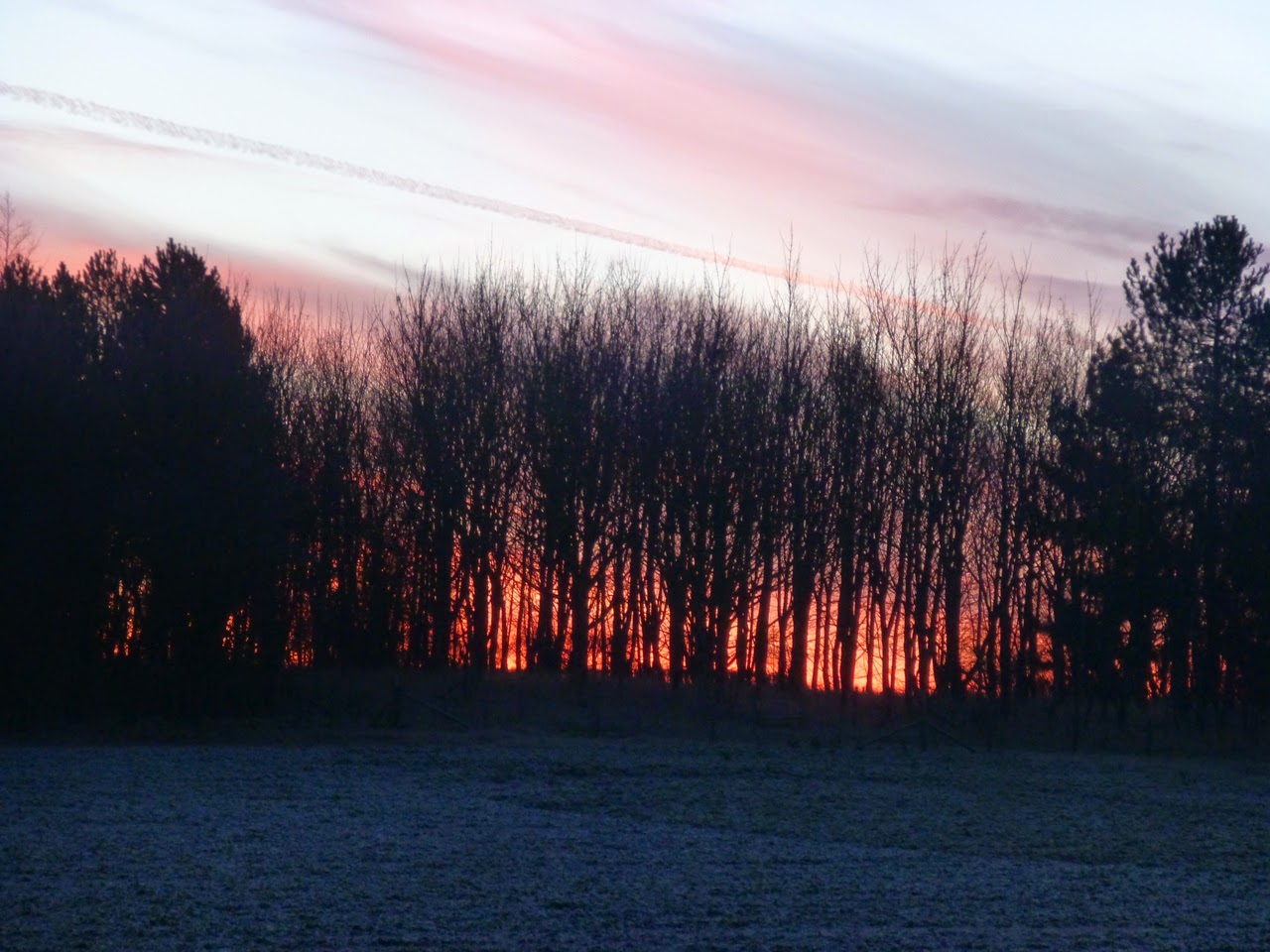 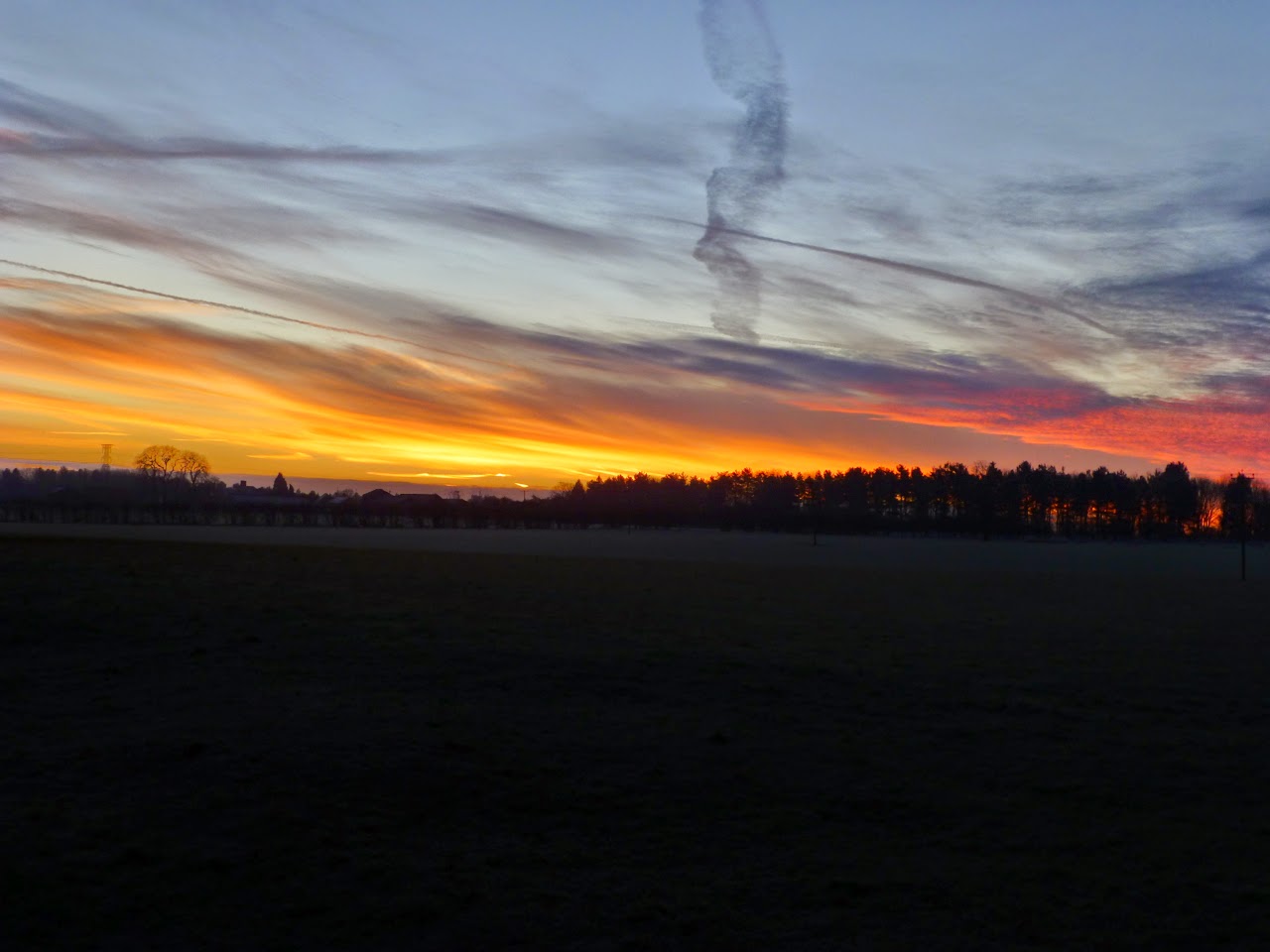 it seemed like a good idea to begin a new chapter of adventurous blanket-making and so I've started two. One of each type. The first is Sandra's utterly gorgeous "Painted Roses Blanket" - the link will take you to her post about it with a link to how to access the pattern. I've changed the colours of the flowers slightly -  mine aren't pink and red, some with gold and some with black centres, but all have black centres and dark red and deep magenta petals. You would think that these two colours would do nothing very exciting when placed together, other than fight, perhaps, but somehow the opposite is true and in a strange and wonderful, hooky alchemy the two colours glow and sing with one another and lend the flowers even more of a three dimensional sense than the pattern already gives them. 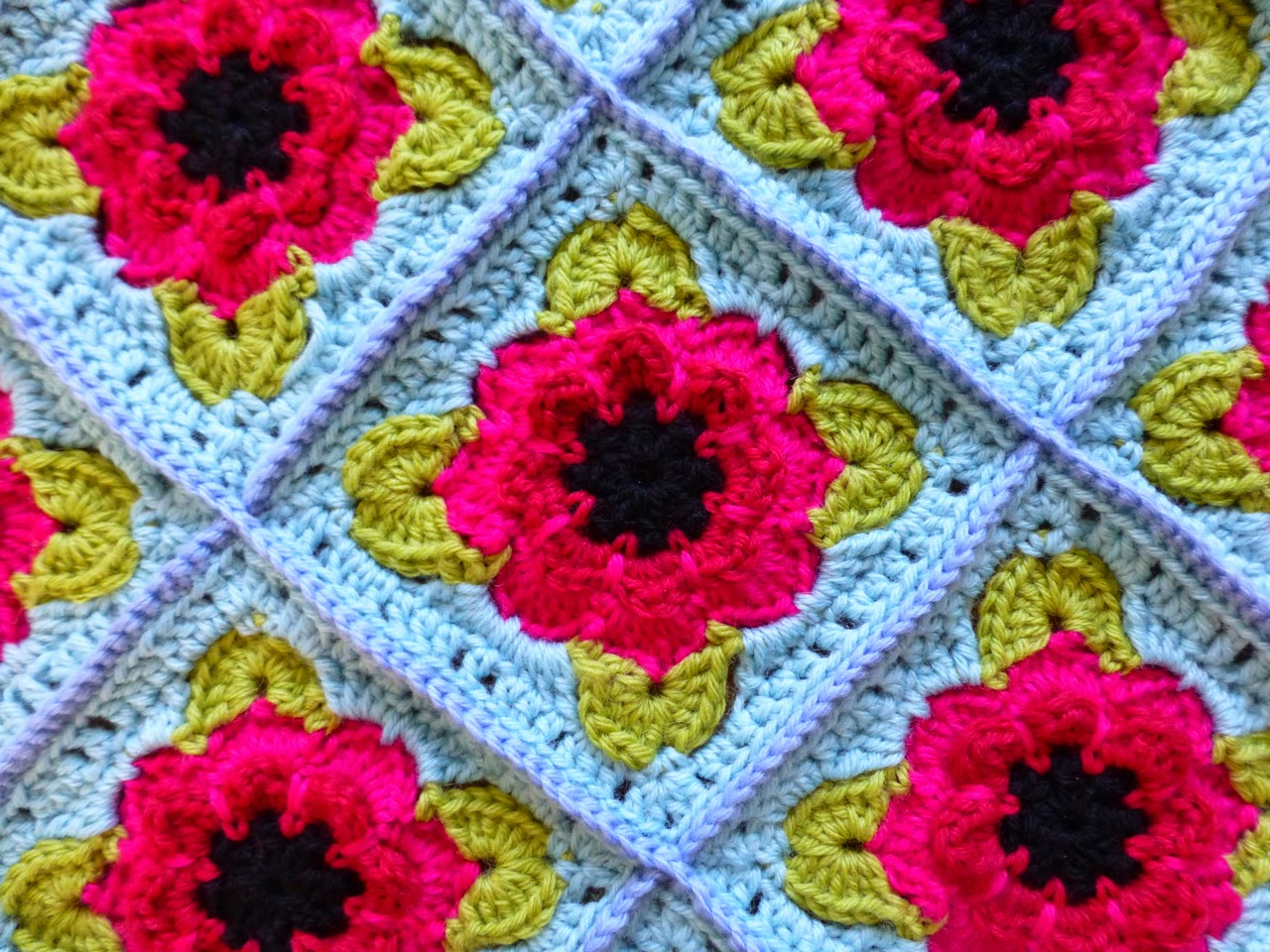 They look like those deep-red, old-fashioned, velvety roses, that grow in forgotten corners of old gardens, where not too much tidy gardening has happened; the kind you find tumbling against crumbling stone in a tangle of briars with a heady wall of fragrance coming off them that would be oppressive, if it were not so subtle. My grandmother had such a rose. I can't remember what it was called but it was a monumental plant that grew round the back of the house from where my grandmother would pick the flowers and put them in a Victorian rose-bowl in the sitting room or on the old Welsh dresser, whose cupboard I loved to bury my head in, as a small child, inhaling deeply the heady smell of old wood, fine linen, green baize and bone-handled cutlery that resided behind its latch.

I've developed a cunning strategy to outwit my dwindling attention span and have allotted myself a fixed target of squares for each week - not too many, but not too few either, and am joining them in rows of eight as I accumulate them. (The finished blanket will contain 80.) 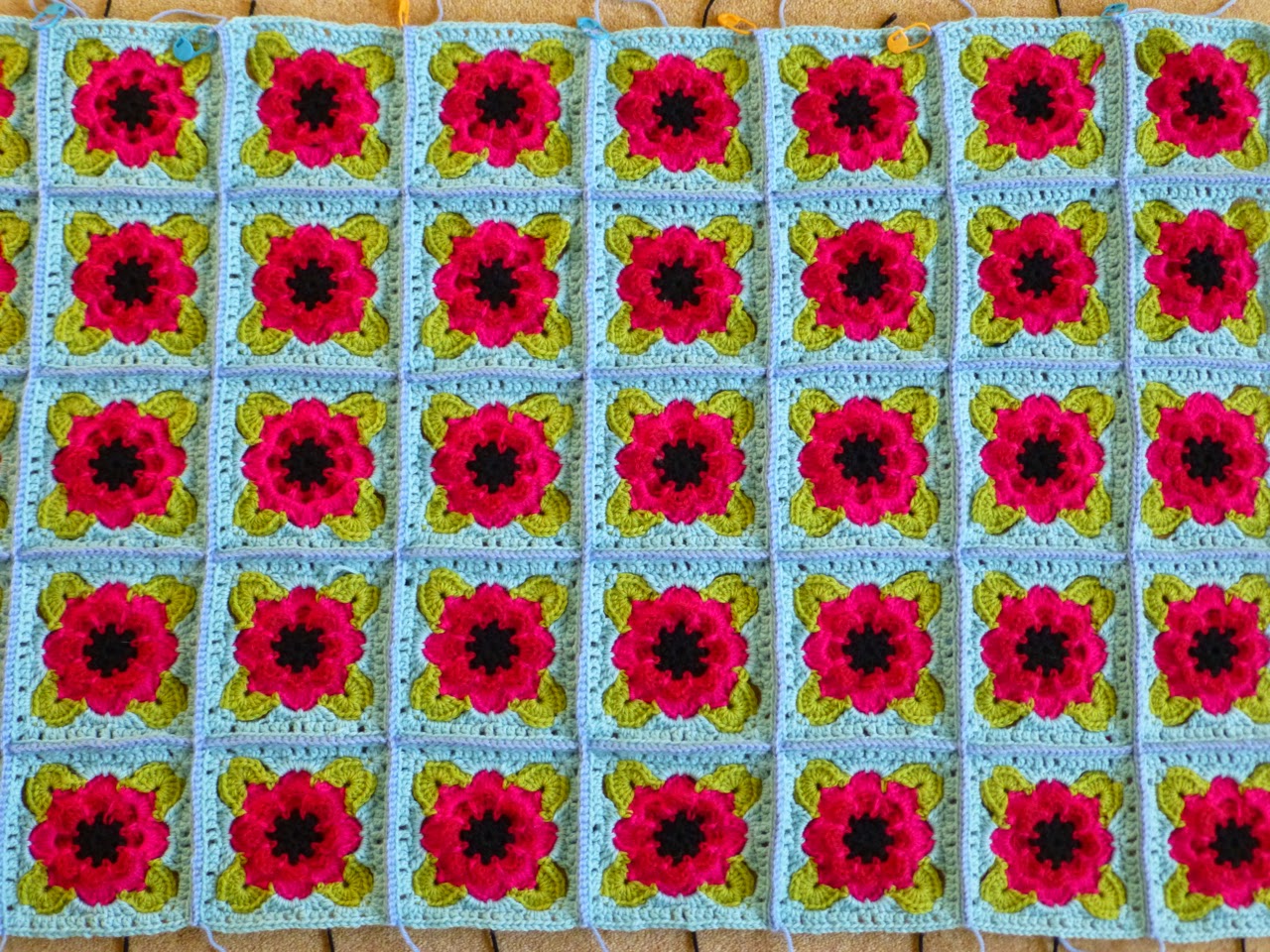 The pattern is a lovely one - complicated enough to be interesting but not so complicated that you can't commit it to memory. It's got enough variation of colour for interest but doesn't require so many colours that you have to cart a hundredweight of yarn around with you, on the move. 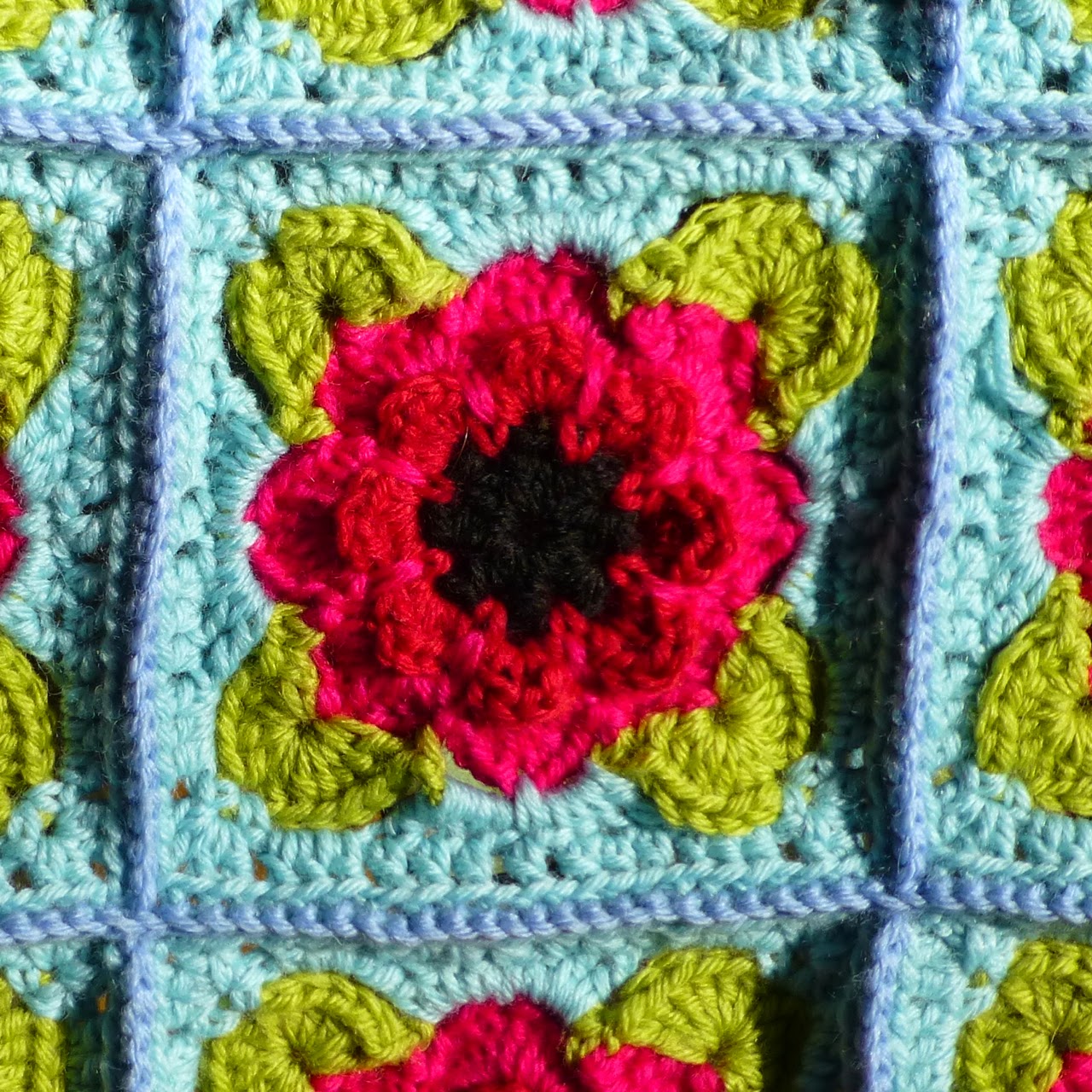 So far, so good! I'm half-way and just need to keep going to get over the awkward two-thirds point when the end is not quite in sight but one feels one has been going at this for quite some time and is getting a bit tired. It's a bit like playing the board game "Ludo" or "Sorry"* when you have four counters to "get home" and it's tempting to focus on just one or two, abandoning the others to their fate. Which, as we all know, is not the way to win!

*"Sorry", if you don't know it, is a 1930s English board game, similar, but not identical, to Ludo. You turn up cards that tell you how many squares to move along a board, rather than roll dice, and if you turn up a "Sorry" card you get to take one of your counters that hasn't started yet and put it in place of someone else's which is hopefully at least half-way round the board, sending your opponent back to the beginning again, with a polite "Sorry". 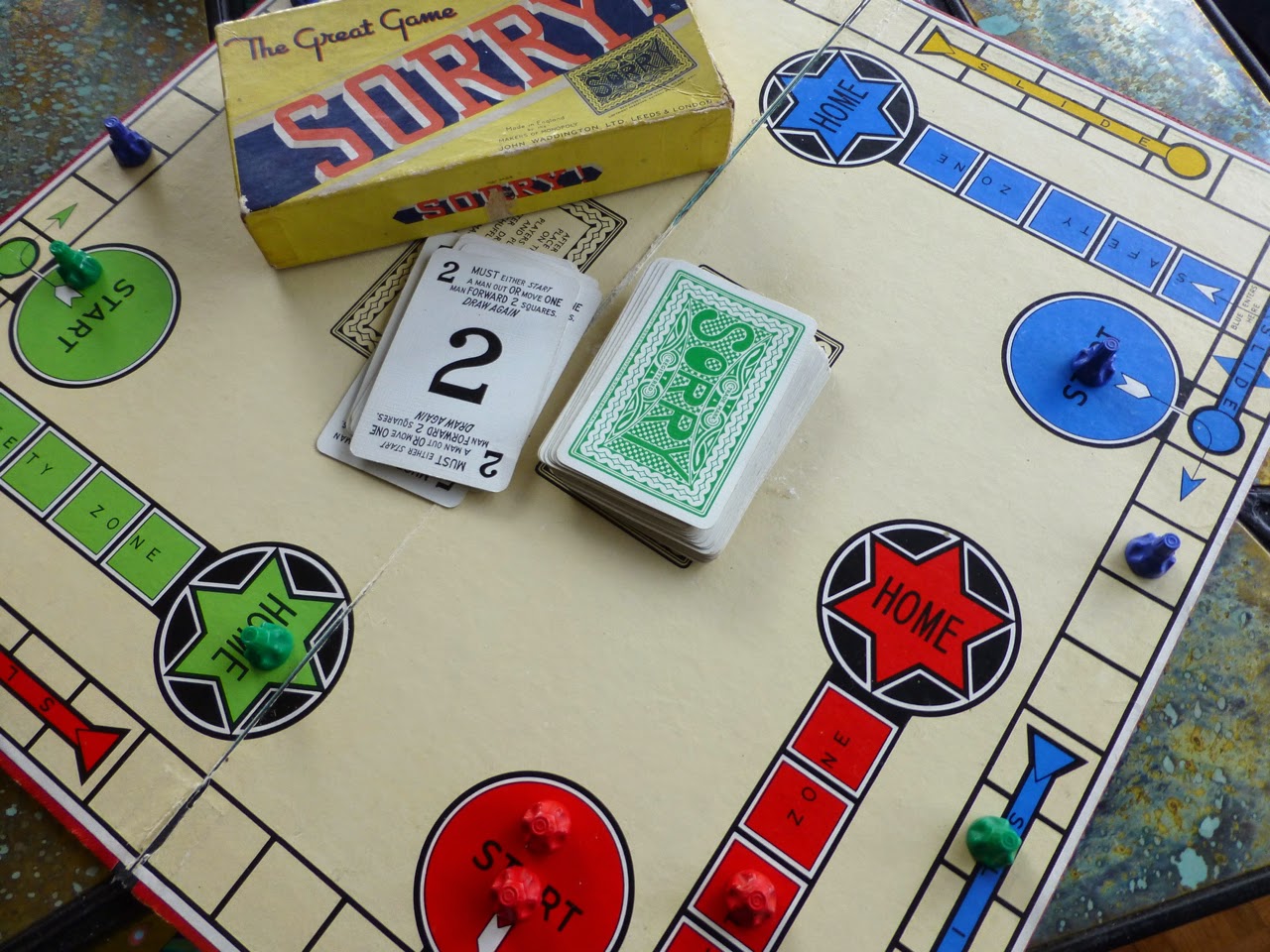 In my childhood this was a quiet and refined game played at my grandparents' house with courtesy and gentleness. Inherited from them, it now resides with us and has been nicknamed "Killer Sorry" by an innocent bystander who, on an occasion of happening upon a round under way between H and me a few years ago, was slightly taken aback to find that what appeared, at first sight, to be a quaintly old-fashioned, harmless parlour game could be played at a speed and with a level of competitive aggression and strategic thinking, more at home on a professional rugby field than a children's board game. Mrs T hangs her head in shame and blames H! Hope he doesn't read this or that will come back straight over the net at me! Probably with good reason!

In our defence, I have to say, that played like this, it has a pace and absorption it never had when I played it as a child and on the sundry occasions when the electric power supply has failed here, like it did last winter, it has proved a valuable replacement for more sophisticated forms of electronic entertainment!

But I digress! My other blanket adventure is the stripy incremental affair in my first pic above. Here it is again in a slightly wider shot. 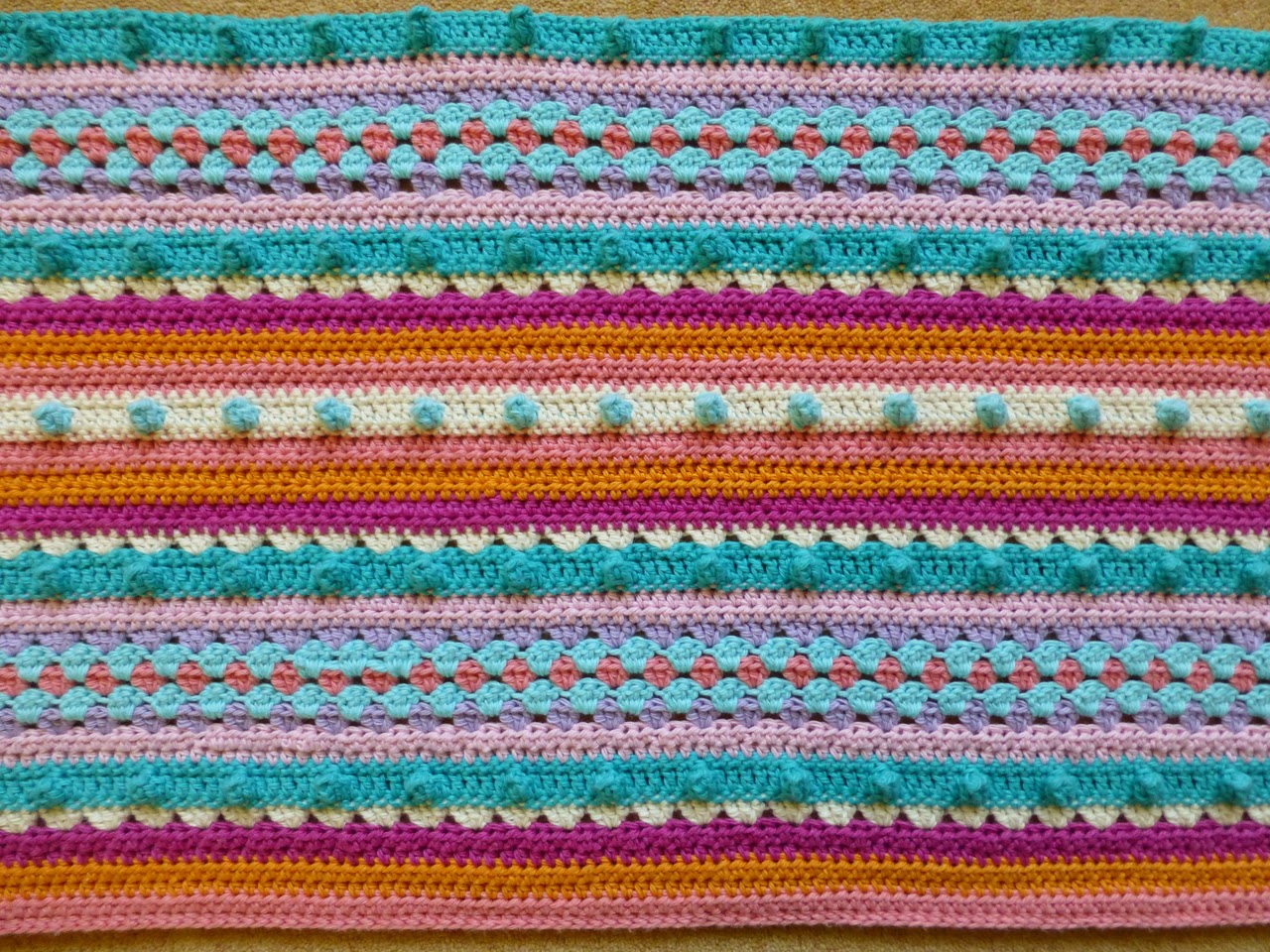 It's one of those sampler-style blankets that use different stitches in different rows and lots of different colours. I've seen a number of these around - Little Woollie's amazing Mixed Stripy blanket is perhaps the most splendid - huge, colourful and extravagantly generous in every regard. (Julie's pattern for her wonderful blanket is published in Edition 18 of Simply Crochet if you want to have a go.) But I didn't want to make anything quite as big or complex as this - I know my limitations! So instead I've gone for the Seaside Blanket design in Handmade Glamping which is a simpler, but still sampler-style, affair. I wanted to make it slightly smaller than the original pattern so I've reduced the basic stitch count to 187 from 204 after a lot of pencil scribblings and painfully tortuous efforts to get my head around the arithmetic. Miraculously it seems to have worked out OK for the different stitch patterns, although I strongly suspect that that's more by luck than judgement. No matter! Who cares, if it works?

I love the different stitches - simple half-treble-crochet rows, mixed with granny stripes and popcorn bobbles. I particularly like the pale turquoise bobbles that pop up from the cream rows, which is an idea I've borrowed from Julie's Little Woollie design and inserted into the pattern run of the Handmade Glamping blanket. 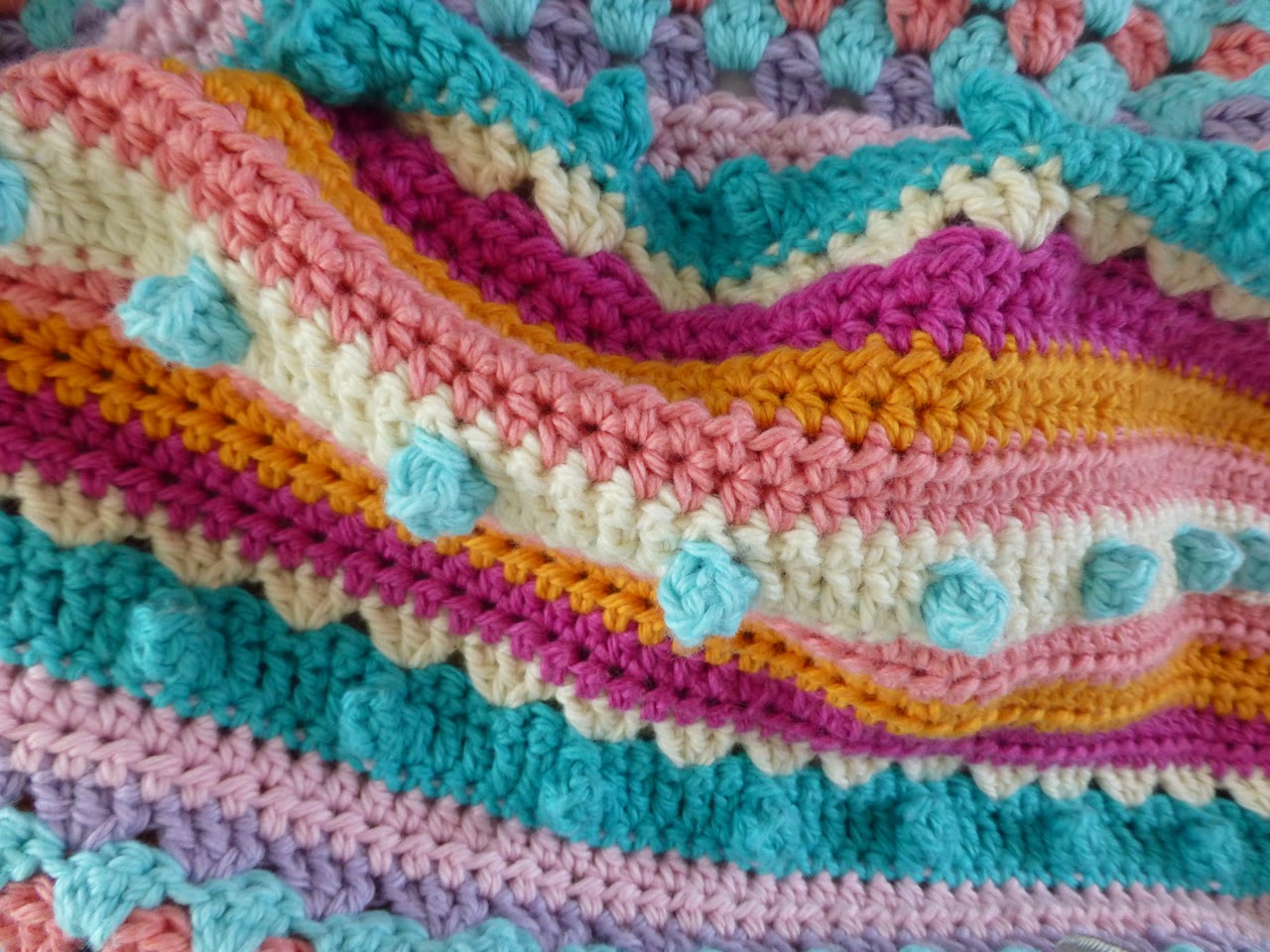 And that faint sense of adventure and daring exploration persists. Both blankets are some considerable way off finishing but they have grown and are growing each week, slowly but surely - magically somehow. Sometimes I look at my basket of yarn and feel like the miller's daughter in the Tale of Rumpelstiltskin who faces spinning all those bags of straw into gold by dawn and knows that the task is too big for her. 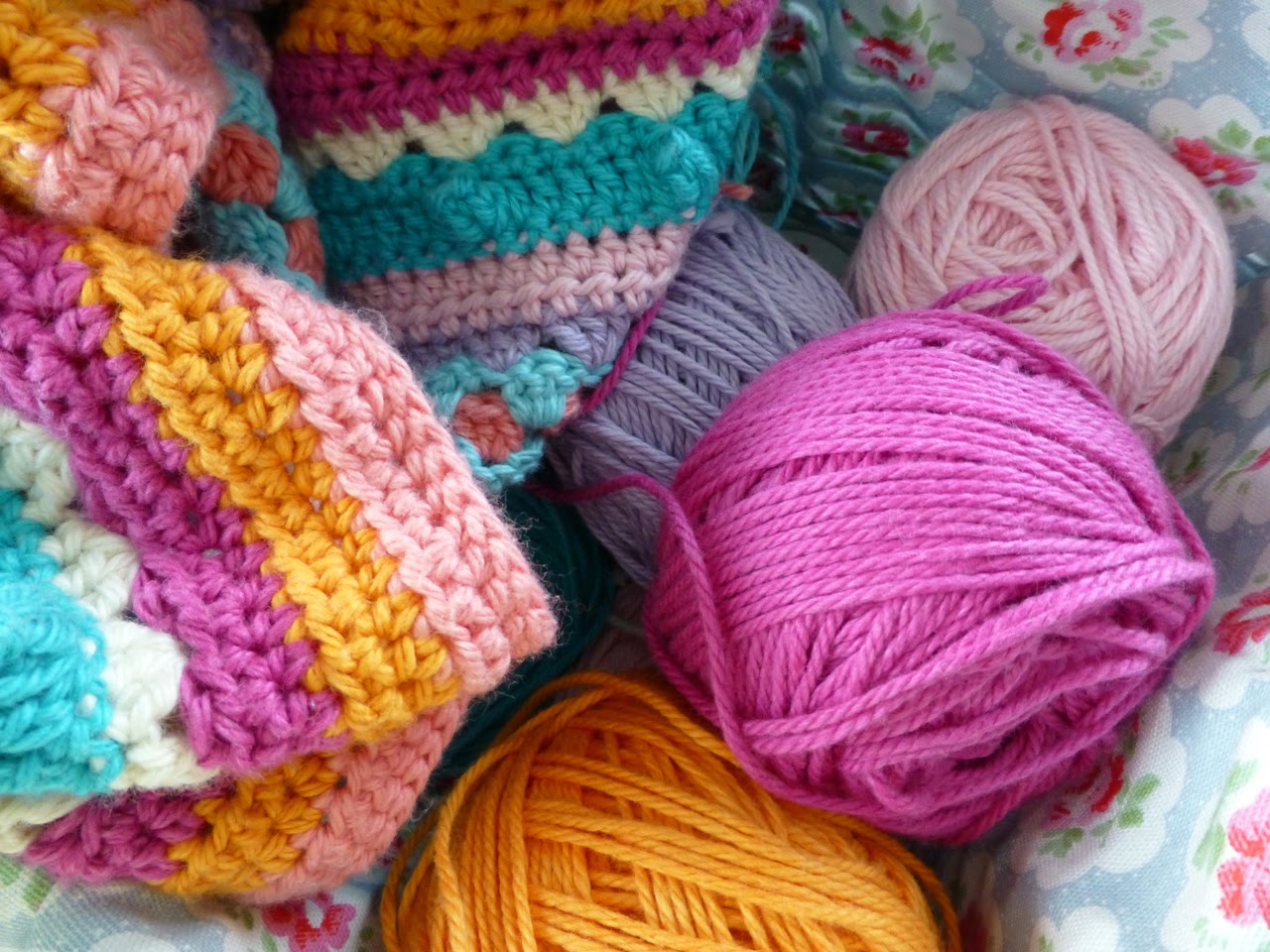 More often than not though, I feel more like Rumpelstiltskin himself, happily absorbed in the twist and twine and colour of each strand and with each stitch, feel that I am gradually turning, not straw into gold exactly, but those balls of yarn into magical, cosy layers of warmth and brightness and some strange but happy alchemy is at work.

No mermaids have popped up from among my stitches nor any strange sea-creatures although every now and again, to begin with, a gremlin crept in on the act of the stripy one and the sequence of colours did not flow easily but jarred and grated and had to be ripped back and rethought. Now though, the pattern and colours repeat evenly and smoothly and, like a Medieval alchemist turning base metal into gold, I am steadily turning a pile of yarn into a wealth of blanket-coverage to keep the bitter cold at bay. Straw into gold, or yarn into blankets? Not sure which is more magical but I think the blankets might just have the edge. Sorry, Rumpelstiltskin!

Posted by Thomasina Tittlemouse at 13:36