Blogging can be a bit like medieval agriculture. A mixture of productive and regular strip-farming, sporadic common-land grazing and sometimes leaving the landscape fallow, for months on end. The vagaries of weather, politics, and the generally unexpected were all potentially malign forces that could, and did, scupper the Medieval farmer's best-laid plans, making agriculture an even more unpredictable affair than it is today, when modern technology can, at least to some extent, even out the impact of some of these things. Blogging can be not dissimilar, I've found.

For various reasons, life has not gone quite according to plan this year. Retirement lasted less than a month before I found myself back at work, for starters, (although not full-time six or seven days a week, for which I am profoundly grateful).

Our new house feels like home which is good. Less good has been the fact that the plumbing has given way, fairly spectacularly, on no less than three occasions - once at the beginning of March when the exceptionally cold weather froze everything solid and snow blew in and settled softly on the Medieval wattle and daub and ancient beams in the loft, resulting in no water, or heating, for several days. Then the boiler and hot water system failed, resulting in another week of no water or heating, and now we have a failed soldered joint in a pipe in the kitchen and no water again. The plumber is due any minute - he will be welcomed with open arms, so to speak.

Not all these challenges, nor their underlying causes, have been so welcomed, I have to say, but sic vita.

More happily, a rather more delightful challenge arrives this week with the Slamseys Creative Summer Challenge which you can read about here. Anyone can join in and, if I understand it correctly, there is no prescriptive single way of doing it - much more a question of going with individual creative grain, with a bit of encouragement along the way.

This is just what I need this summer - working within an academic structure means I now actually have a summer holiday with enough time to enjoy some creative stuff, without being against the clock all the time.

So, taking the preparation post here seriously, I thought I would look out some paper and paints etc for a bit of summer daubing / dabbling.

One thing led to another and, in the end, I spent that part of this last weekend, (when I was not baling out the bucket beneath the leak in the kitchen), making my own customised, blank art journal.

Several reasons for this. I am inexorably drawn to scrap paper when experimenting with drawing or painting. I love beautiful blank books, but I find they stifle creativity in me because I am so anxious about not messing them up with mistakes. By contrast, scrap paper (clean) out of the bin or the backs of envelopes I find very freeing. I also find A4 size paper restrictive, when used portrait-style - sort of makes me feel I have to keep my figurative elbows tucked in; landscape-style is better width-wise but it's a bit short. A3 I find, is too big - intimidating again.

But make your own book and you can pick the size and shape you want as well as choose the type of paper. I wanted the pages to be made of something that would take wet media but not expensive watercolour paper that would raise my old anxious demons about messing up, or wasting paper.

I found in Hobbycraft a lovely big pad of so-called "mixed media paper" which is suitable for paint, pastels, inks, pencil and collage - nice to paint onto; robust enough to take glue and collage materials; easy to write on - but not so expensive that each sheet must be a work of art worth framing.

Armed with a bit of research on Coptic binding, I got D to cut the paper from some of the pad to make almost-but-not-quite square pages and a couple of cover boards from a piece of Daler board. I then found an ancient and viciously-sharp, bone-handled bodkin in my grandmother's sewing box which did duty both as a bone folder to crease the pages neatly and as an improvised awl to make the required holes. 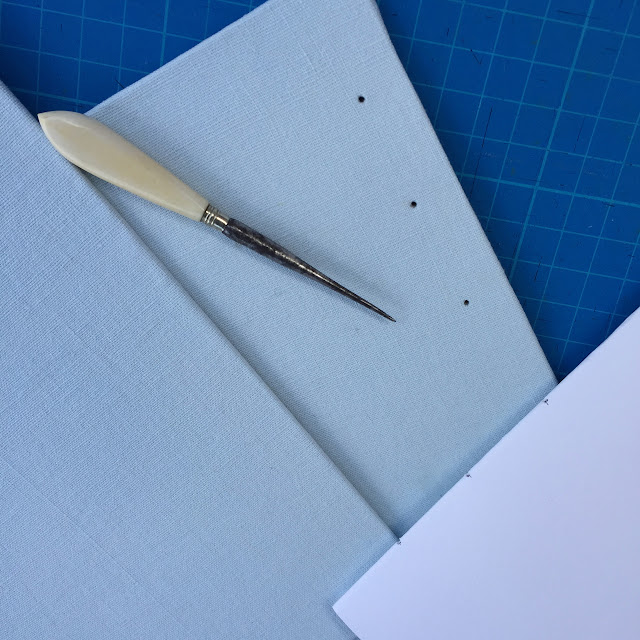 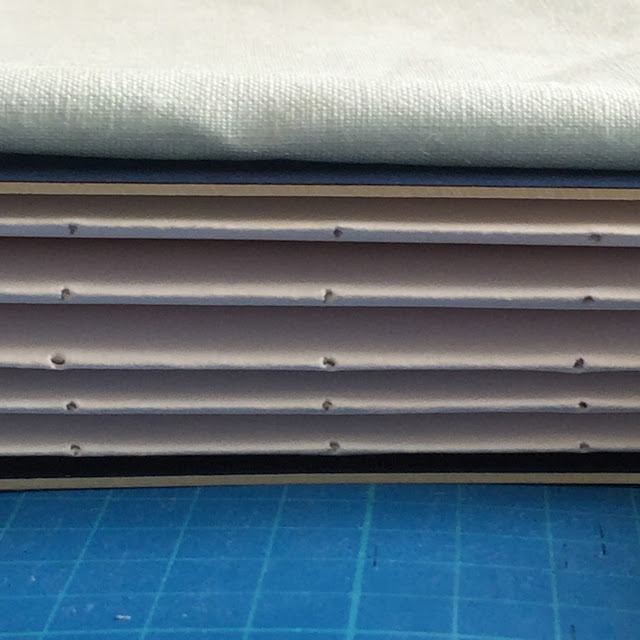 Then came the stitching. Coptic binding is a neat trick pioneered by Coptic Christians for binding very early copies of the Gospels in Egypt in the 2nd C AD. Its beauty is that it allows the bound book to lie completely flat, when open, which is very useful for modern purposes, when using fluid media such as paint, ink or glue. 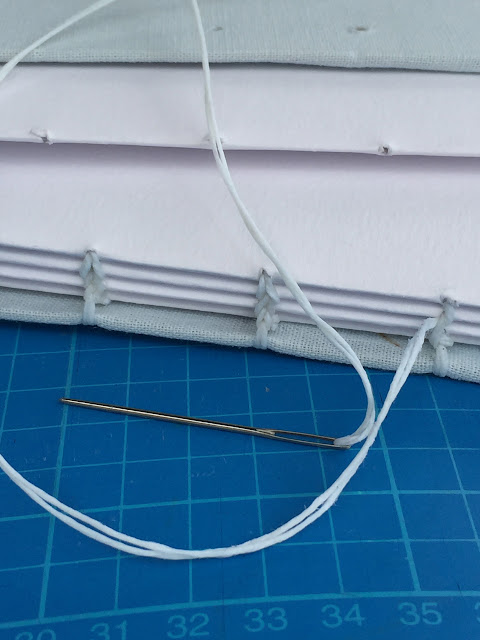 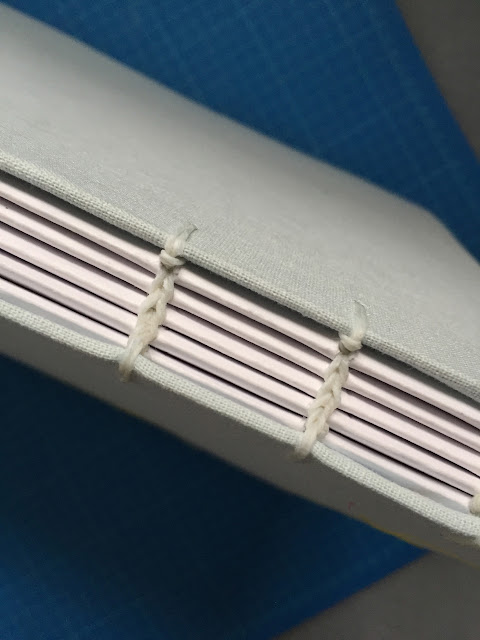 I used a tapestry needle and some waxed linen thread which I found in the jewellery-making department at Hobbycraft. It wasn't too difficult to do,  although I think I will do a better job on my next attempt, now that I better understand the principles, through a bit of practice. If you're interested in giving it a go, there are some good YouTube videos on how to do it and an excellent Wikihow article here. 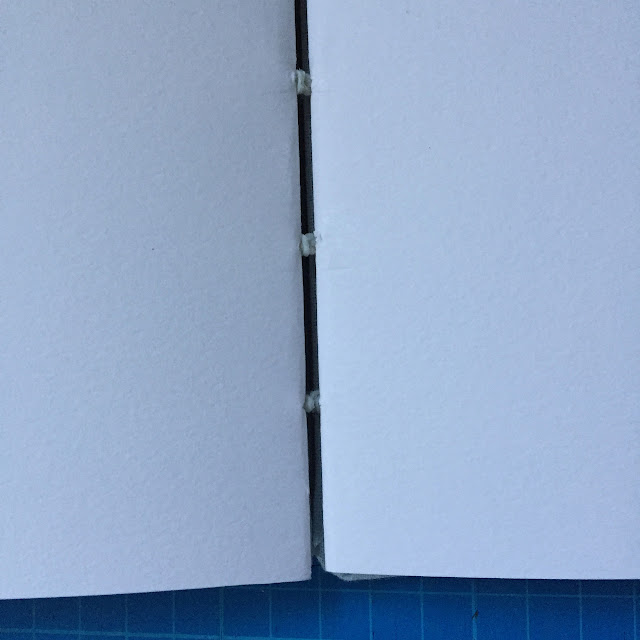 The journal itself is intentionally rather plain - I was originally going to use some rather lovely summery fabric for the cover boards and leave the binding exposed but I was beginning to head into the territory of a book-too-nice-to-sully-with-use, so I went for a plain pale blue, linen off-cut as the basic board covering and then made an old piece of patchwork into a rather more decorative loose cover.

The patchwork panel that forms the background for the loose cover had itself been an experiment a few years back, inspired by a little German poem about autumn. I removed the more autumnal-toned strips and was left with a more summery-feeling panel, evocative of golden, ripening crops and blue summer skies. 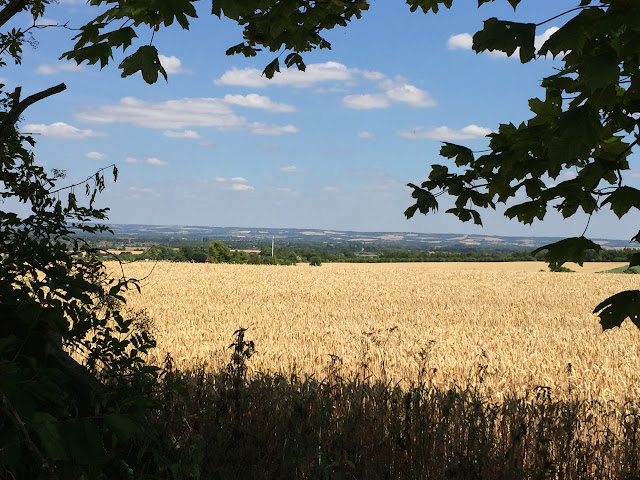 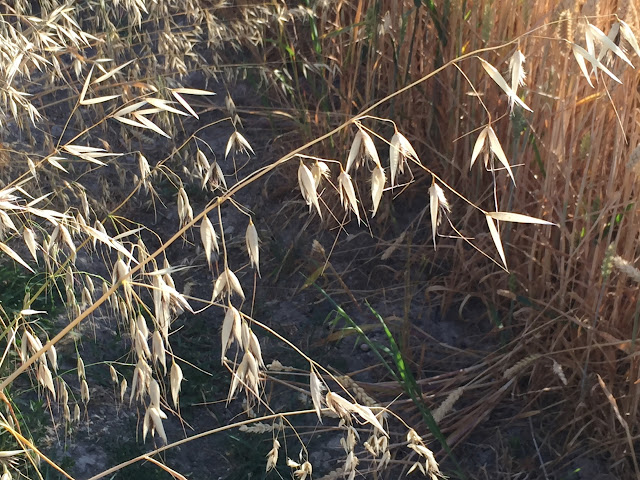 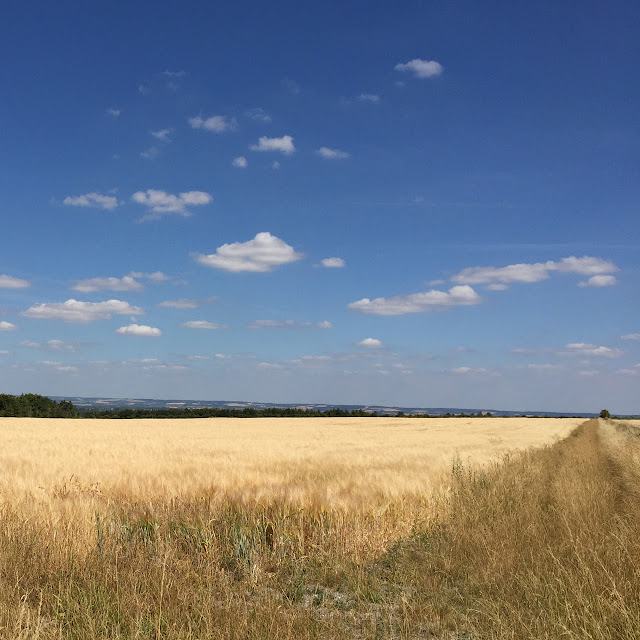 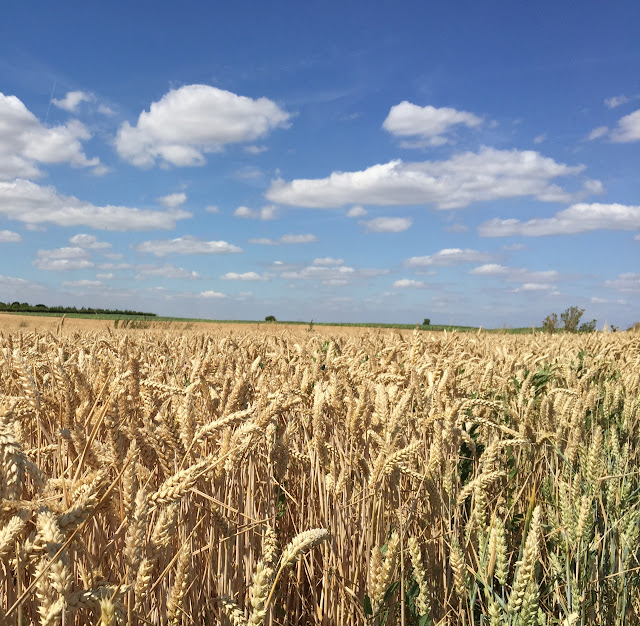 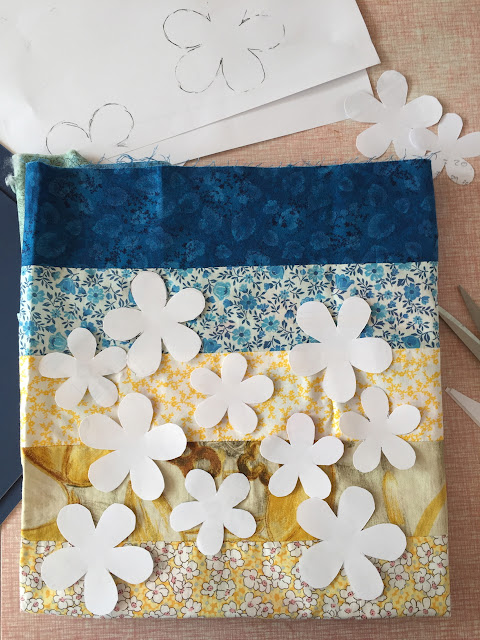 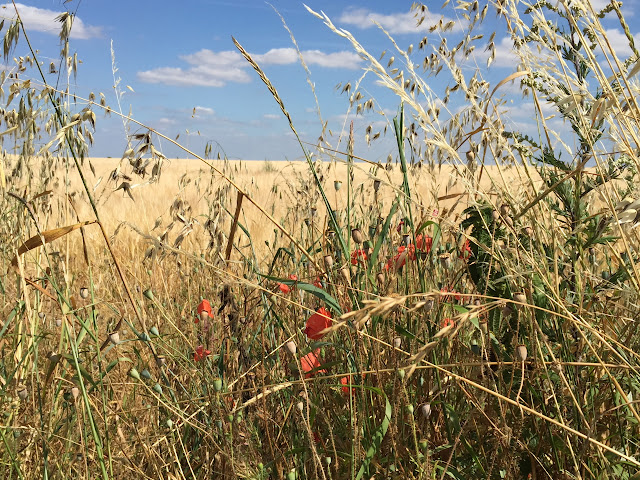 All that was needed was a few bright flowers appliquéd using Bondaweb and small scraps from my fabric scrap boxes. 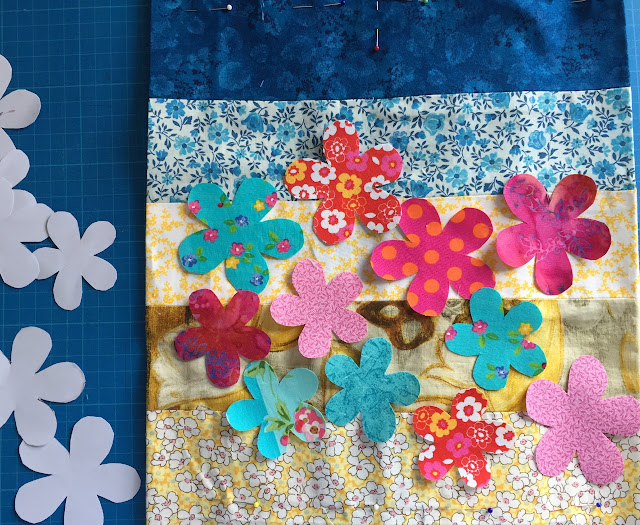 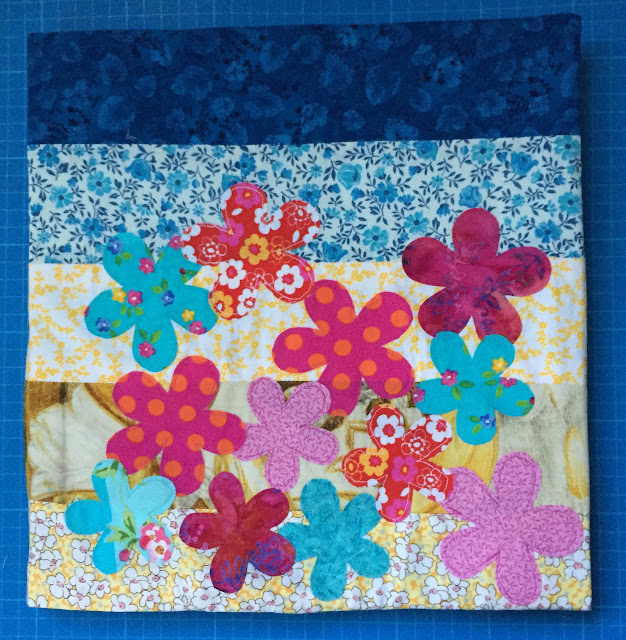 The result is pleasing (but not too pleasing, if you're with me!) and, hopefully therefore, user-friendly on all scores. 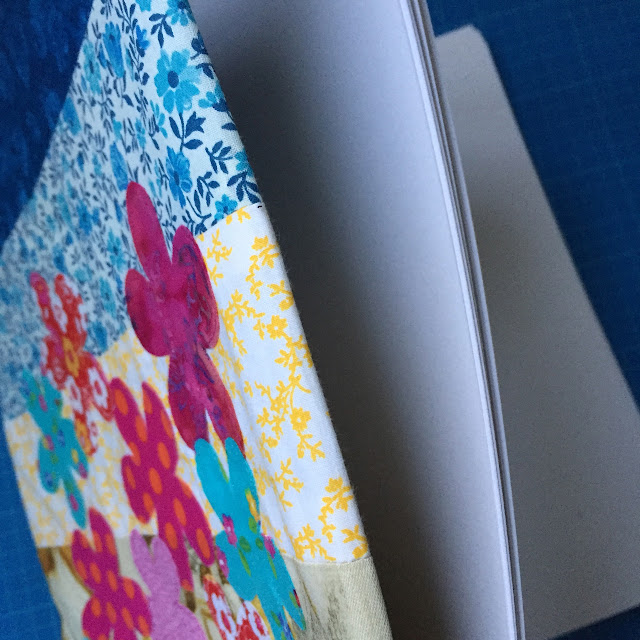 Now to make a mark in it! (See this week's prompt here)


Posted by Thomasina Tittlemouse at 12:10