This year, Slamsey's Creative Summer Challenge, with its focus on regular creativity, has several different prompts rather than a single one each week. To get over the daunting barrier of the blank page, Tuesday's prompt was to 'make a mark'. I love this phrase because it's so generously enabling. You don't have to have any developed artistic skills to 'make a mark'. All manner of simple possibilities offer themselves from using dilute watercolours to paint a wash of background colour, to cavalier spills of ink drops, spatters of acrylic paint from an old toothbrush, or simple geometric patterns, drawn or printed.

A print seemed a good way for me to get started (as it did last year). I knew exactly what I wanted to do. Amongst the big lavender clumps in the garden have sprung up some large, flamboyant white poppies. No idea where they came from - they just appeared, as poppies do. By now, the flowers are over but the seed-heads remain - parchment-coloured and as elegant and distinctive as the showy, silk-skirted flowers were. 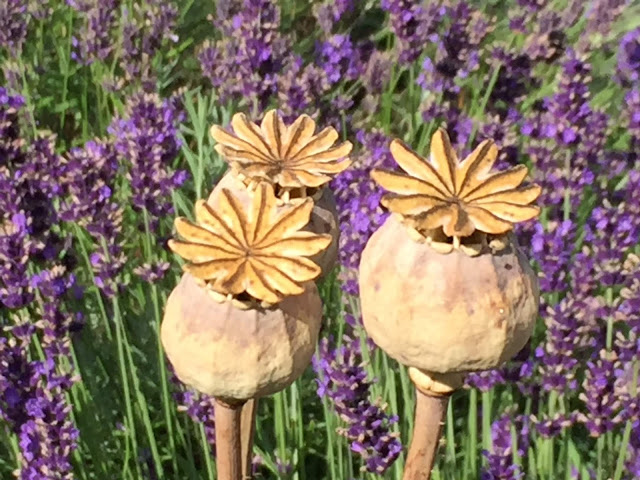 The upper surface of the seed-head would make a wonderful print, I thought, and how easy would it be, simply to pick the heads, dip them in paint, or ink, and press onto paper? Such an obvious idea but potentially so effective. Thinking it must have been done before, I had a look on Google. The Interwebs were strangely devoid of the kind of thing I imagined. Images of poppy seed-heads - yes, loads; prints using them as a stamp - no. 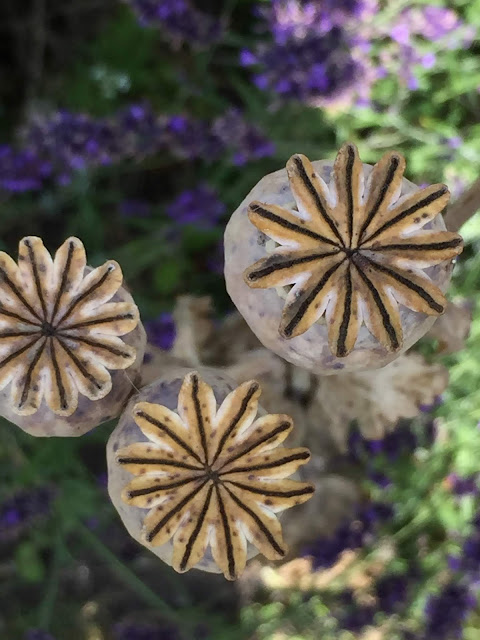 On closer inspection of the seed-heads, I realised that there was a good reason for this. The top of the poppy seed-head is not flat. It is concave. 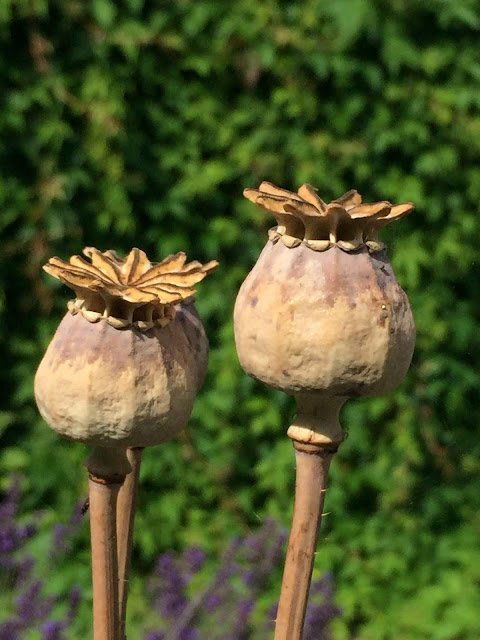 The clear cog-like shape that I thought would print so easily and clearly, would not print easily at all. Dipped in paint, the seed head would at best only pick up the colour around the upper edge and applied to paper, would leave only a disappointing partial image. In addition, the dried heads are now so brittle there is no 'give' in them to allow pressure to make good the dip in the surface.

Slightly disappointed, I realised I would have to replicate the shape I wanted by carving a rubber stamp. Using my new concertina-book I made some preliminary drawings in pencil. Simple though the images were, they weren't simple enough - images for printing always need to be much simpler than I imagine. I redrew my images and added some gouache paint to see how a printed version might look before cutting anything. 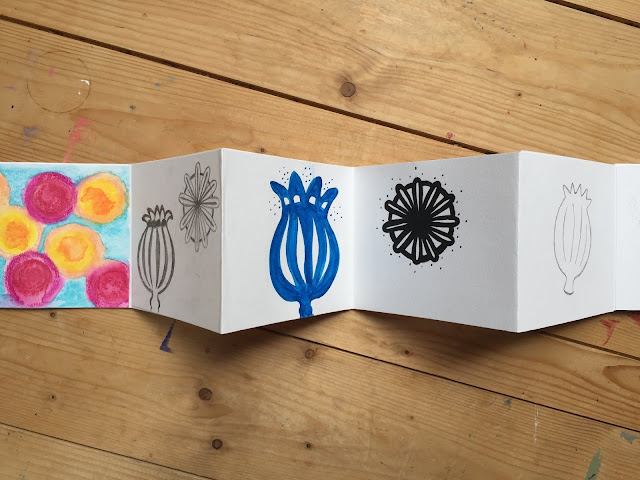 My first rubber stamp was still too complicated and resulted in a fuzzy, disappointing print.  But the second and third were better and the resulting prints are nice and clear. 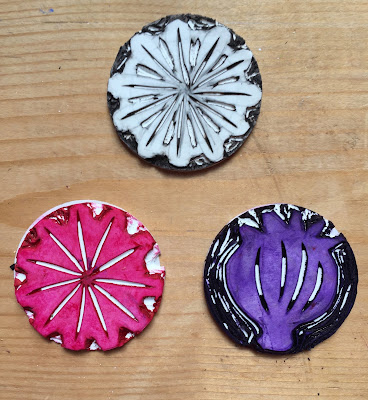 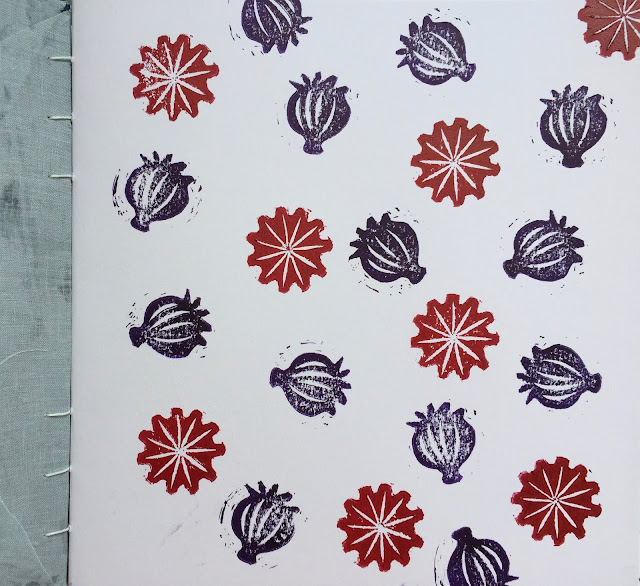 In my enthusiasm, I managed to smudge the still drying ink and had to add an extra seed-head to cover it up which spoils the spacing slightly. I am using Caligo Safewash Relief Inks for the first time and although the colours are beautifully intense and have a lovely sheen when dry, they are less easy to use than the basic Speedball Water-Soluble Relief Inks I've used before.

I've learned quickly that these new inks require much better discipline in use and in cleaning up, not least to avoid accidental as well as intentional mark-making! They take much longer to dry, for starters, and you need much less ink for a good result. Too much ink and it not only takes forever to dry but also doesn't allow the colours to shine through properly.

Having not only smudged the ink on page one of my art journal, I also managed to get ink on the patchwork cover : (

Although these inks are washable, they are more permanent than the Speedball ones when dry, and despite rinsing in cold water, rubbing with soap and, in desperation, raiding D's supplies of white spirit and then putting in the washing machine, my patchwork book-cover remains obstinately marked (and not in a good way). But it's taught me quickly and effectively to raise my standards. Good prints come from a meticulously well-disciplined method of working, not my somewhat haphazard rush-from-one-thing-to-another approach. I am far too impatient.

The lavender and poppy clump has triggered some other experiments too, picking up yesterday and today's prompts to make mail art and something inspired by nature.

... a quick sketch in water-soluble pastels on a watercolour-paper postcard 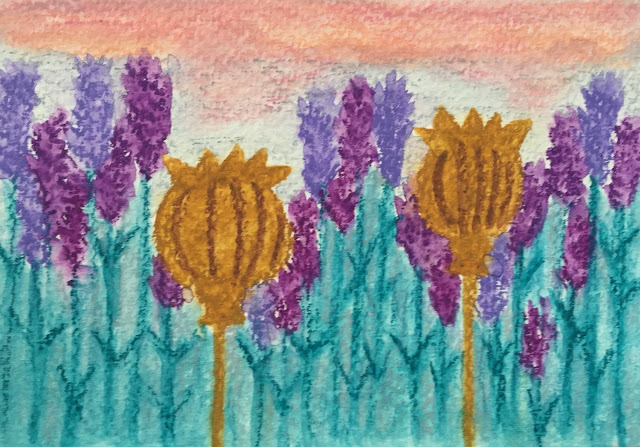 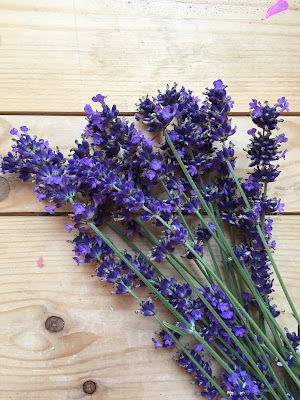 - with varying degrees of success but pleasing, in an impressionistic kind of way; 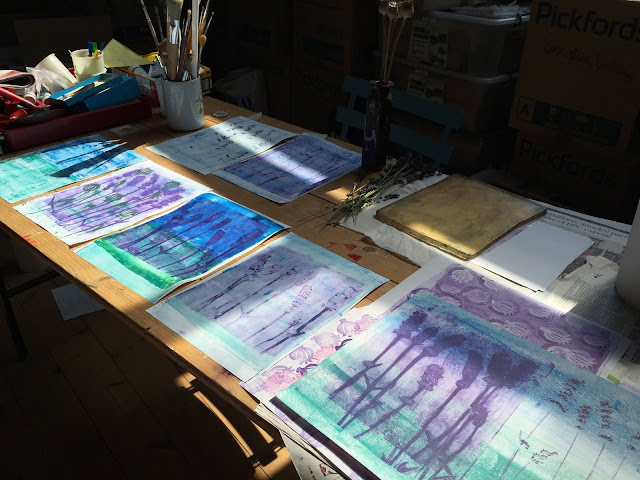 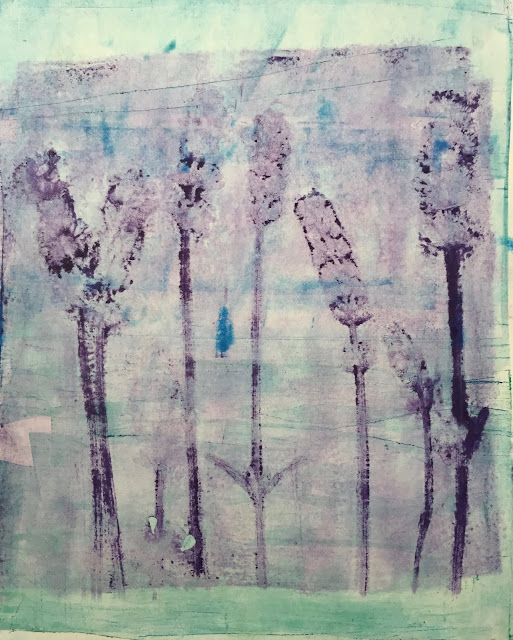 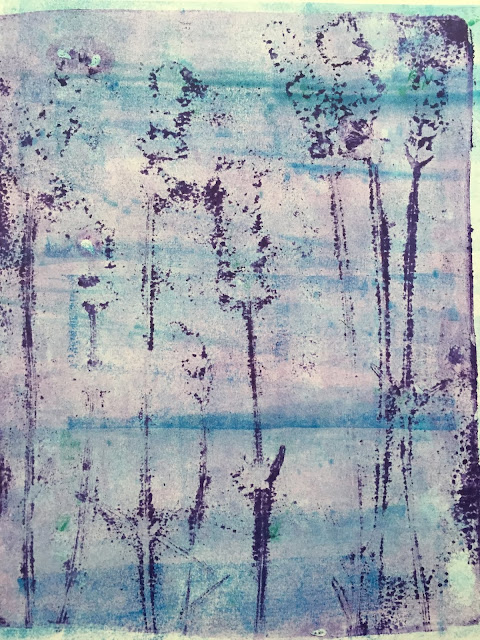 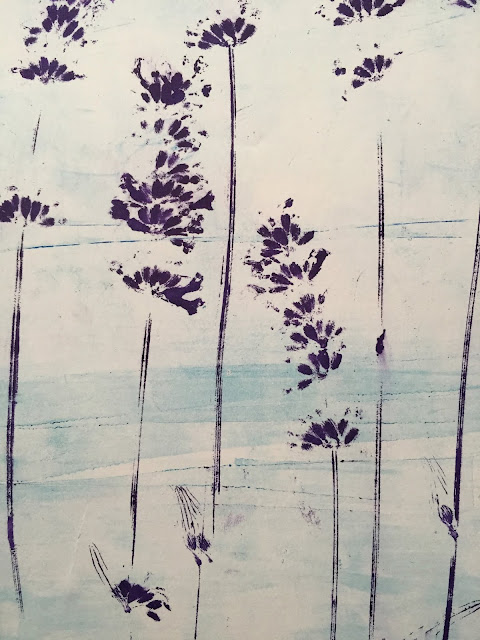 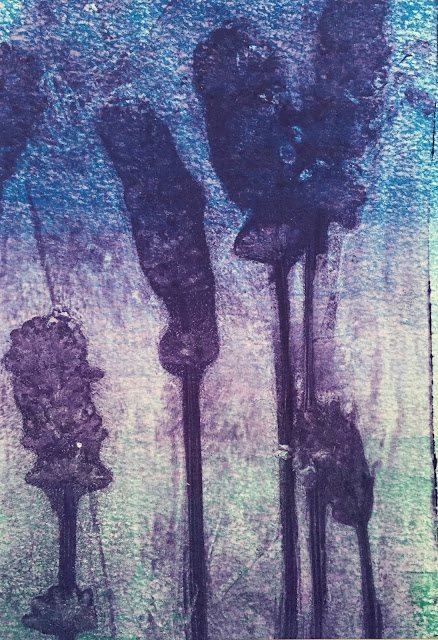 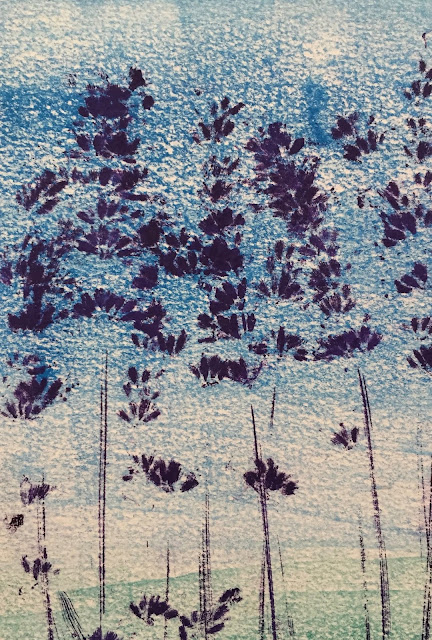 ... and prints from a bigger stamp cut in a block of SpeedyCarve rubber of the poppy seed-head against a sunset / sunrise background. This stamp has made a number of postcards, all slightly different depending on how the colours for the background came out. These two have gone in my art journal and the others I will send as snail-mail once I've got round to making some decorative envelopes to put them in, perhaps from some of the spare prints of the first seed-head stamp (just to keep the theme consistent outside and inside!) 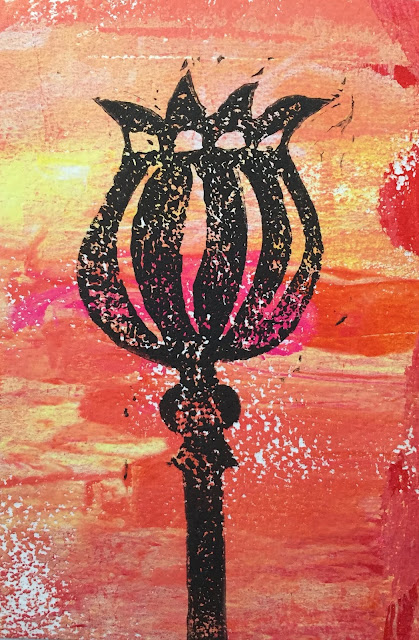 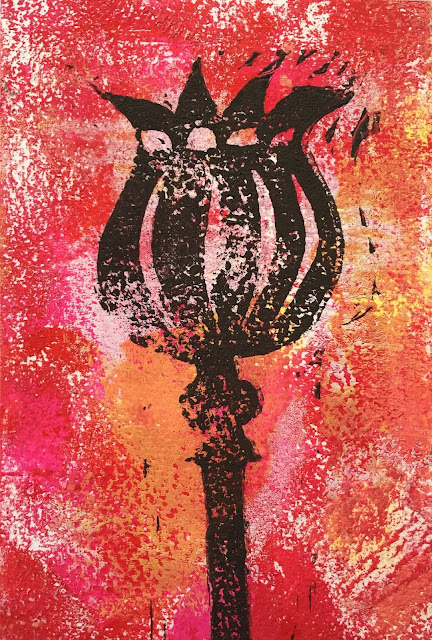 If you think you might like to join in with the Slamseys Creative Challenge 2019, do give it a go. It has no rules and is about enjoying the artistic process for its own sake - a perfect summer holiday project for anyone who likes to doodle or play with pen, pencil or paint.

Posted by Thomasina Tittlemouse at 22:48